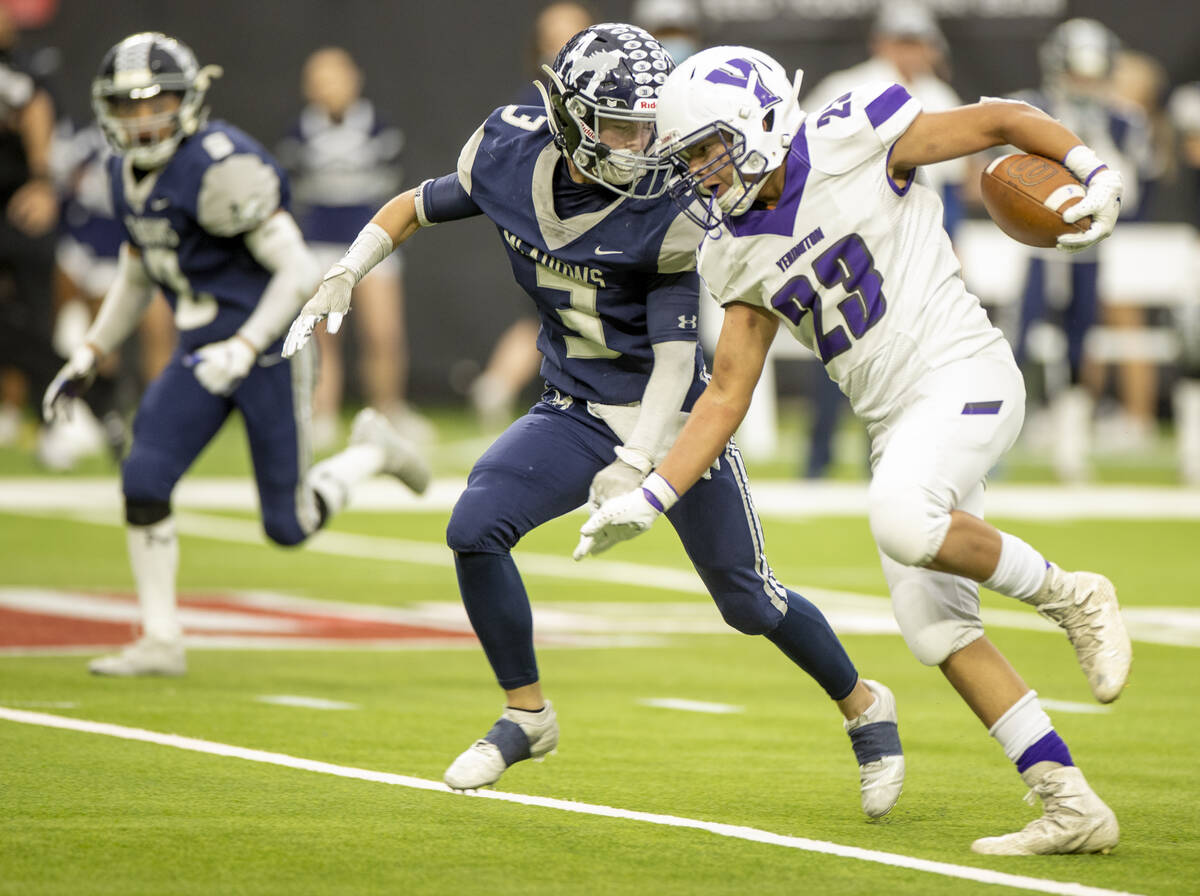 The Meadows defensive back Gage Rinetti (3) chases down Yerington running back Felix Garcia (23) on a late run that helps secure the win during the second half of their Class 2A football state championship game at Allegiant Stadium on Thursday, Nov. 18, 2021, in Las Vegas. (L.E. Baskow/Las Vegas Review-Journal) @Left_Eye_Images 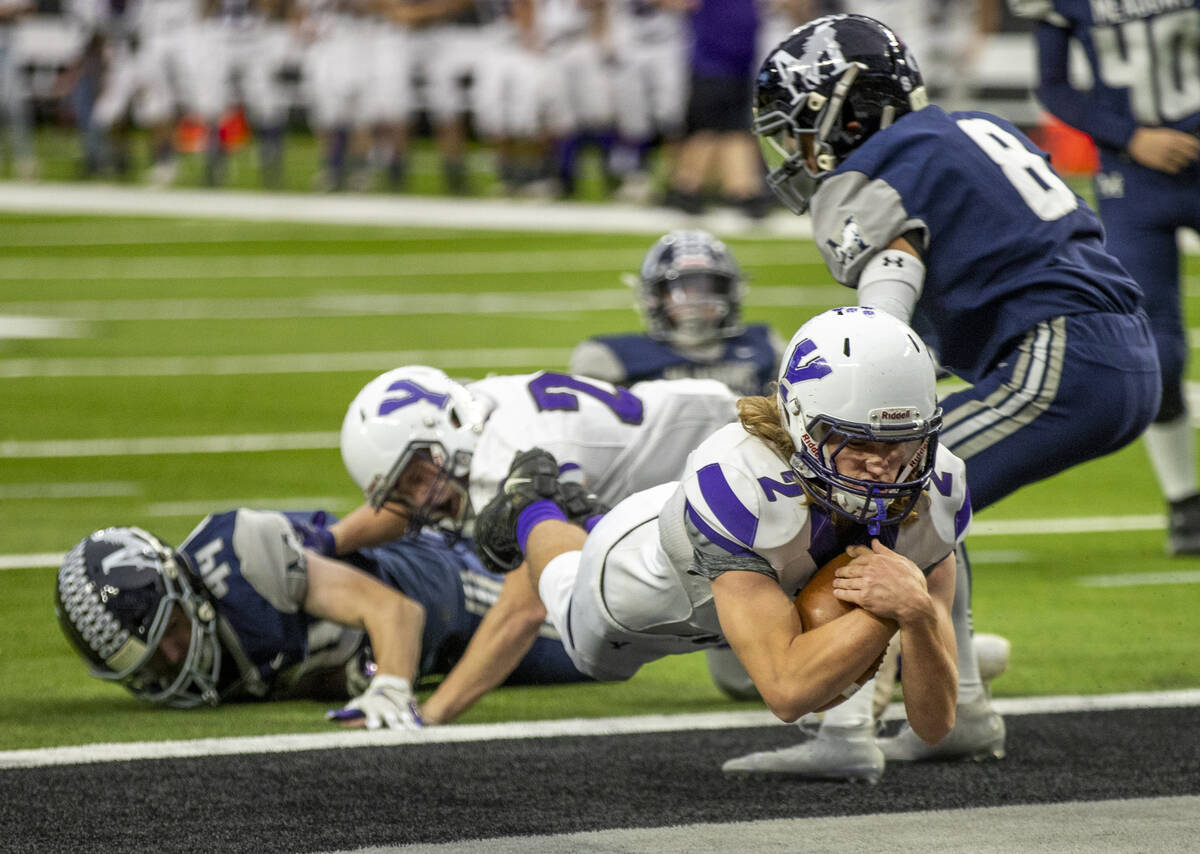 Yerington quarterback Cade Mushrush (2) dives over the goal line for a touchdown over The MeadowsÕ defense during the first half of their Class 2A football state championship game at Allegiant Stadium on Thursday, Nov. 18, 2021, in Las Vegas. (L.E. Baskow/Las Vegas Review-Journal) @Left_Eye_Images 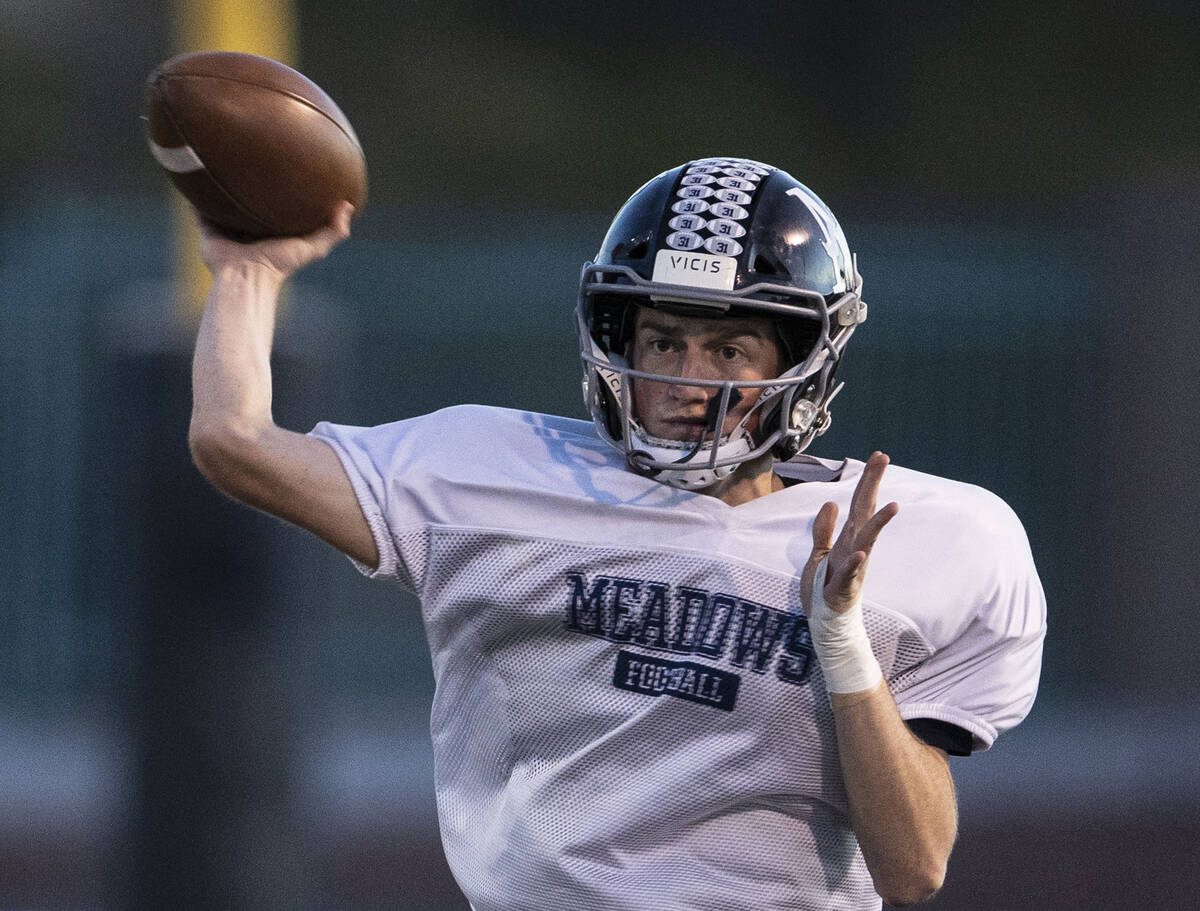 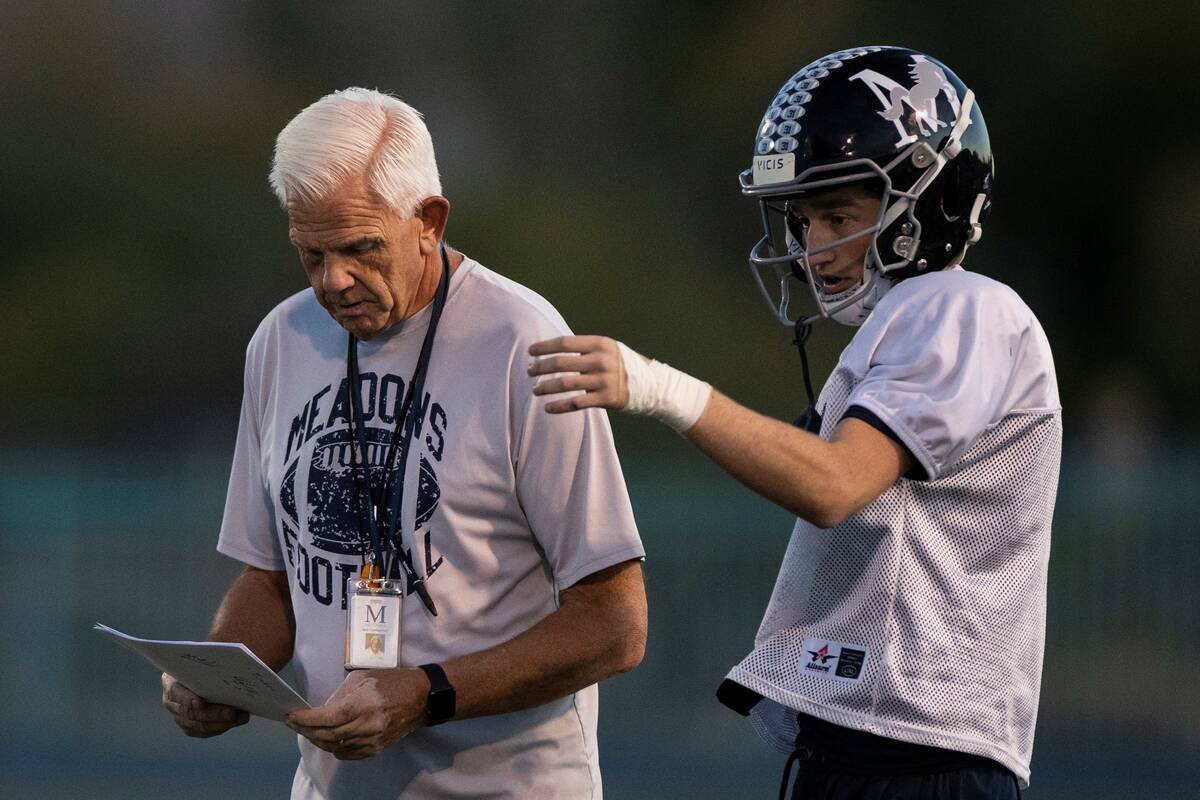 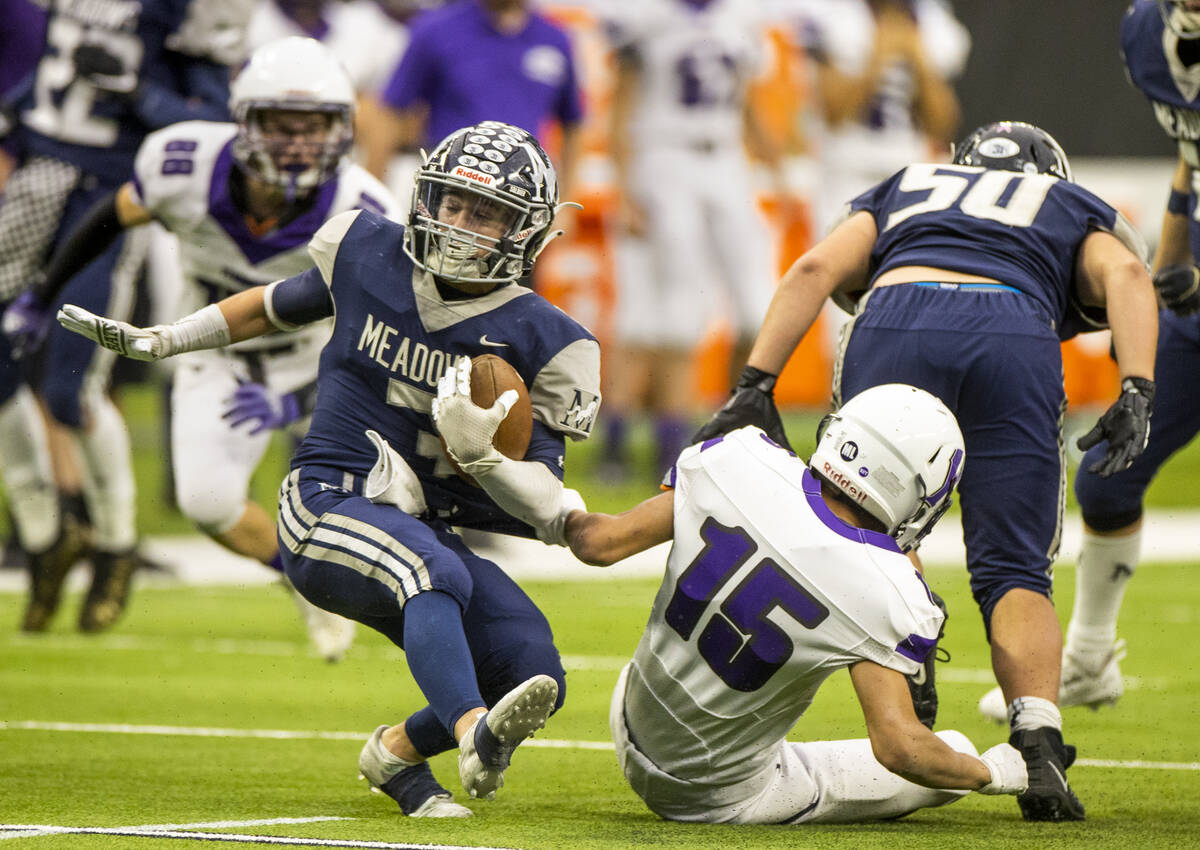 The Meadows running back Gage Rinetti (3) spins away from Yerington linebacker Luis Ramirez Martinez (15) during the second half of their Class 2A football state championship game at Allegiant Stadium on Thursday, Nov. 18, 2021, in Las Vegas. (L.E. Baskow/Las Vegas Review-Journal) @Left_Eye_Images

The 12 seniors who are instrumental in The Meadows mowing down opponents on a weekly basis were freshmen on an independent eight-man program when the thought of playing — and succeeding —at Class 2A seemed almost unreachable.

It’s been quite resurgence for the The Meadows, which enters Friday’s game at Democracy Prep (2-2, 2-1 Southern League) with a 6-0 record (3-0 league) and has outscored its opponents 300-57.

No result made more of a statement than last Friday’s 42-0 victory over previously undefeated Lincoln County. That performance made it clear that The Meadows is the team to beat in 2A and not only complete its return dominance, but also end Northern Nevada’s chokehold in the class that dates back to 2010.

The Meadows nearly ended it last season, but lost a fumble and failed to recover an onside kick that led to a pair of scores in Yerington’s 35-26 victory. Consecutive snaps over quarterback Sean Gosse’s head took the Mustangs out of a scoring opportunity near halftime.

“We talk about it all the time because we really thought we had that title after such a hard year,” senior center and linebacker Zack Ramsey said. “We lost that game, and I know all of us on the team has this unfinished business.”

Senior offensive and defensive lineman Costa Stamanis could only watch that day, having torn his ACL and a meniscus in that season against Lincoln County. The thoughts of what he could have done to reverse the result swirled in Stamanis’ head, and there was nothing he could do about it.

He and his teammates are doing something about it this season.

“We know we can get to it, and we know it takes just those extra nine points to win it,” Stamanis said. “Everyone’s been working their absolute hardest to try to get back to the state championship and win it this time.”

The seniors, in particular, remember what it was like to play eight-man football, a much more wide-open version that is closer to touch than tackle. Coach Jack Concannon said his players forgot the fundamentals of tackling that they had to reacquire. His players also made a year-round commitment to the weight room.

“We not only believe, but we know that when we go into a game we’re in better shape,” Concannon said. “From a coaching standpoint, when you’re able to tell them they’ve paid a bigger price than the other team has, you get your way with them.”

Now the Mustangs hope to capture the program’s first 2A title since it was the last Southern Nevada team to pull it off.

When will another team from the south have as good a chance after this season? It won’t be The Meadows, at least not in the near future. The Mustangs will move up to 3A next season.

They had prior chances to advance, but had appealed to remain in 2A. There was no appeal this time.

The Meadows is ready, and those 12 seniors are a major reason for it.

“Coming in freshman year, it was, ‘Let’s stick with the program and try to build it,’” said Gosse, the senior quarterback. “That’s always been our goal to not only to build this season … but it was built for underclassmen, built with support behind it and try to build a program so that when you leave, you may leave (where) something you made is still standing.”