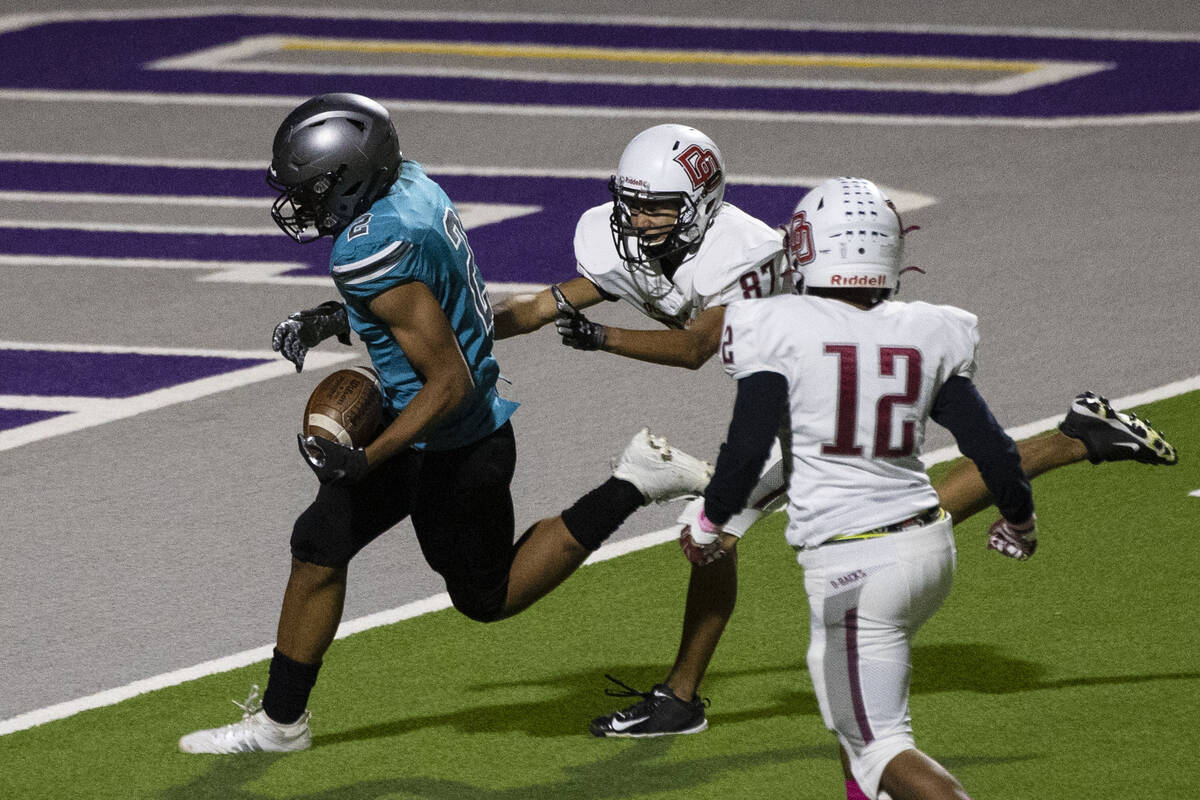 Silverado High running back Donavyn Pellot (2) runs past Desert Oasis slotback Zachary James (87) and Amare Norman (12) as he scores a touchdown during the first half of a football game at Silverado High School, on Friday, Oct. 22, 2021, in Las Vegas. (Bizuayehu Tesfaye/Las Vegas Review-Journal) @bizutesfaye 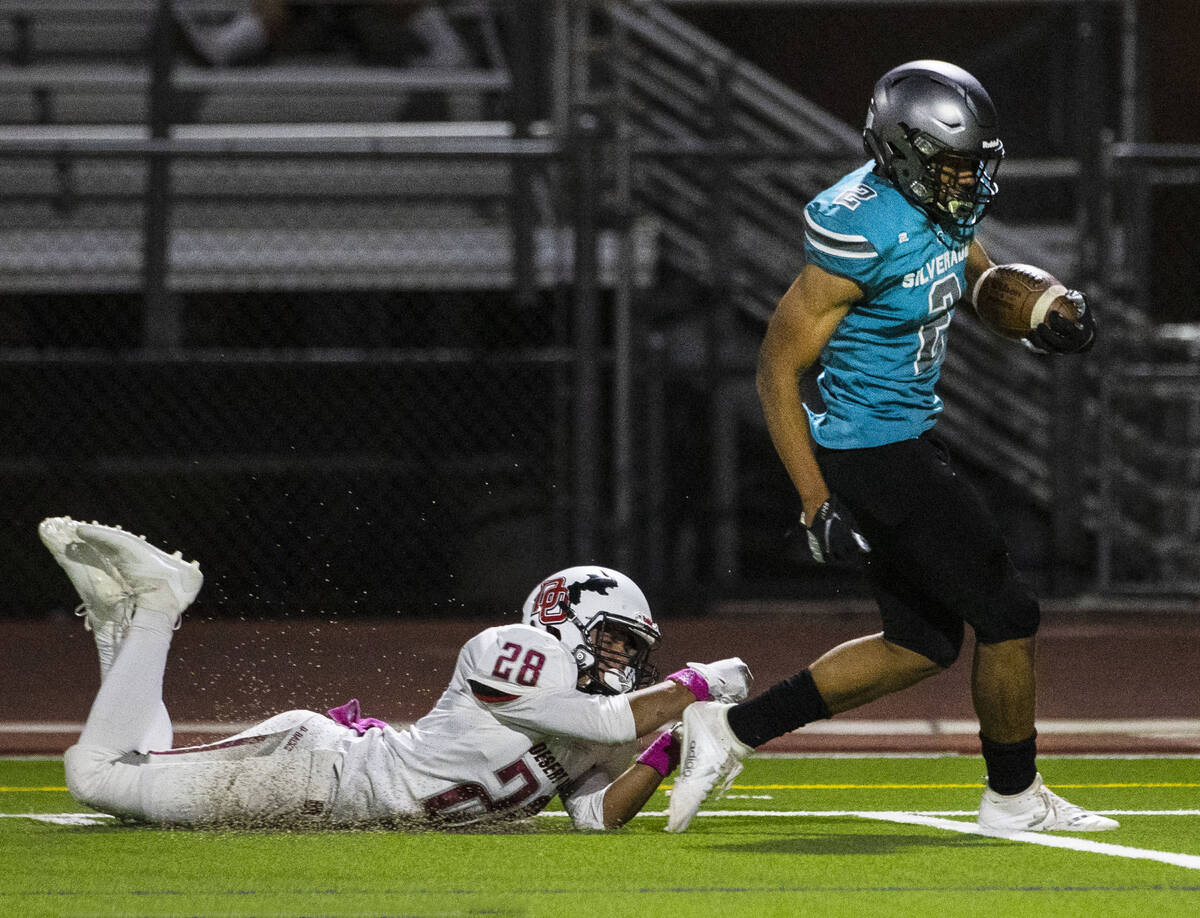 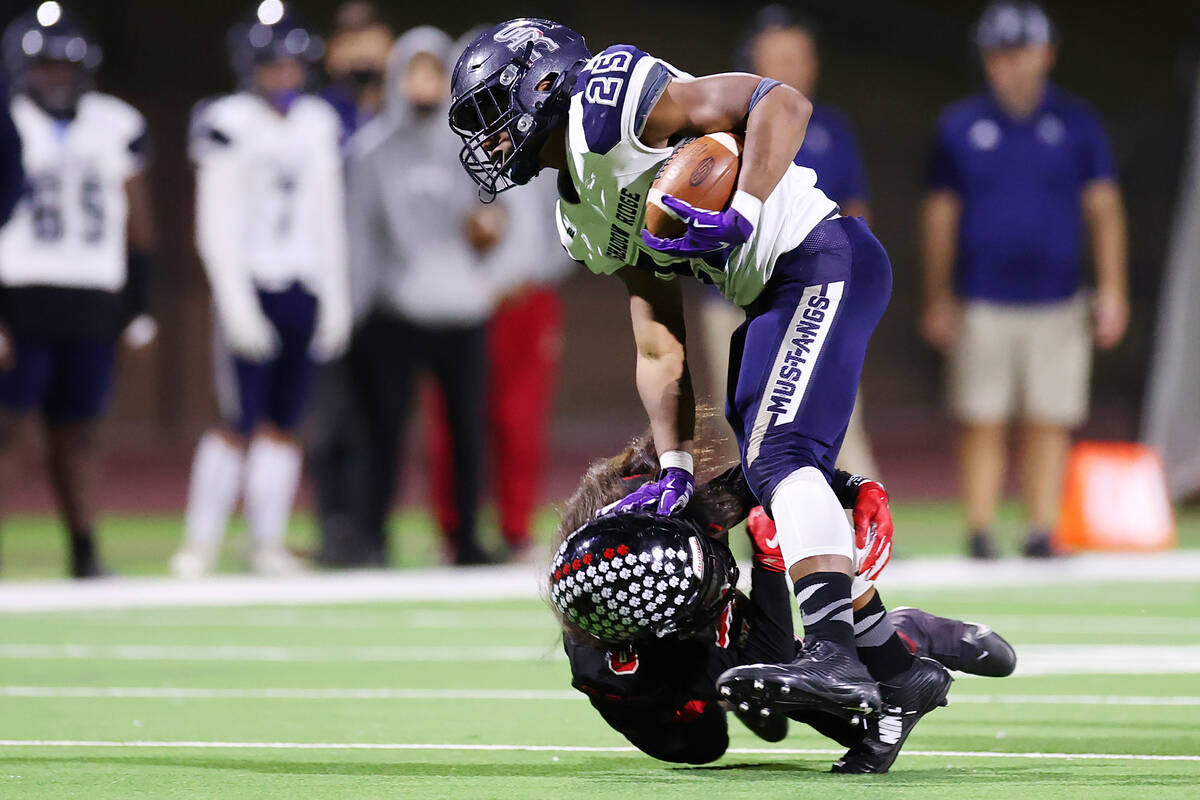 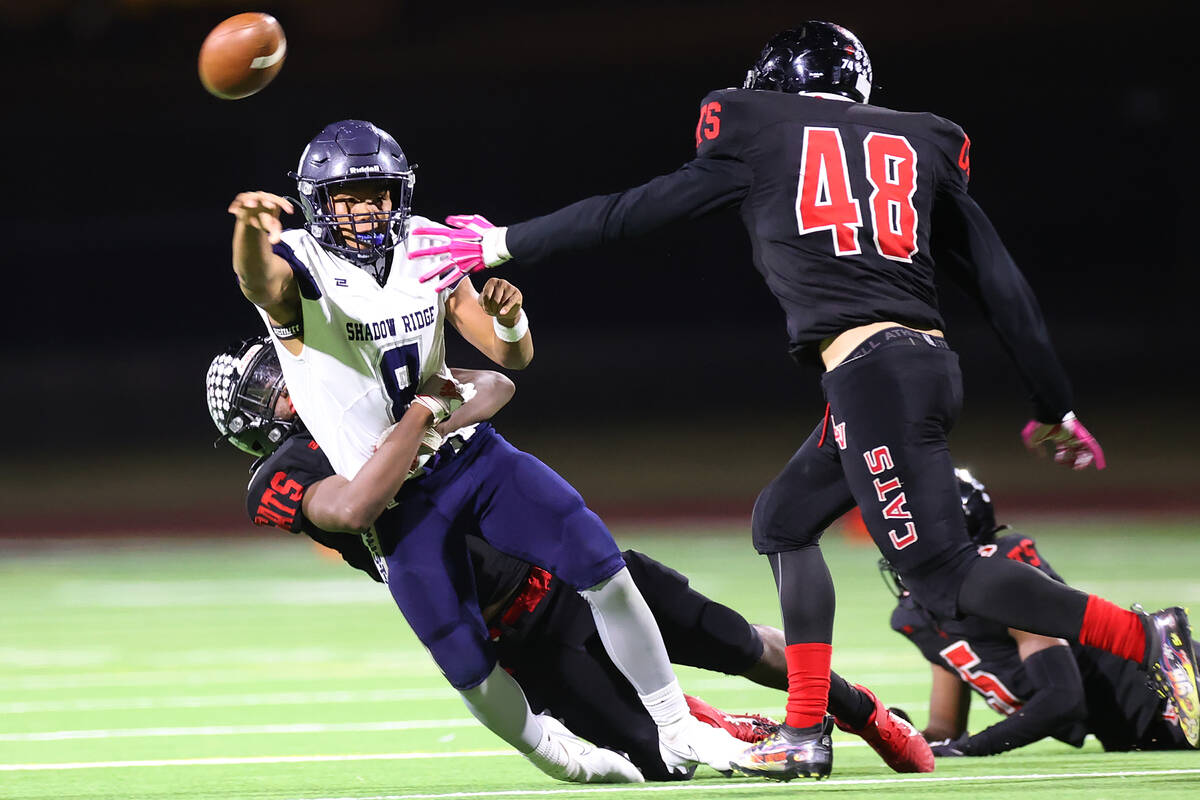 When Silverado defeated Shadow Ridge in the second week of the football season, it served notice to the rest of Class 4A that the Skyhawks were the team to beat.

It wasn’t just the decisive 50-29 score that made Silverado the clear favorite. It was that the Skyhawks, known for being a power running team, passed their way to victory.

Even Shadow Ridge coach Travis Foster acknowledged that Silverado surprised him by basically abandoning the run.

“My philosophy is a lot like Coach Foster’s,” Silverado coach Andy Ostolaza said. “We’re along the same lines about running the ball and being really physical up front on both sides of the ball. But we had a lot of things go our way in that game, and I think our kids understand that.”

The teams are preparing for a rematch — with the stakes much higher. They will meet for the state championship at 3:40 p.m. Thursday at Allegiant Stadium.

The Desert League champion Skyhawks (11-0) have outscored their opponents 567-101 in their undefeated run to the title game, and the 29 points Shadow Ridge scored were the most they have allowed in any game.

The only game Silverado played that was closer was a 32-14 win over Coronado in the regular season, and the Skyhawks dominated the Cougars 42-7 last week in the state semifinals.

“This season has been a blast,” said Silverado junior Donavyn Pellot, who is second on the team in rushing and receiving yards and has 15 touchdowns. “We put in a lot of hard work in the summer coming in, lifting, getting in condition and meshing as a team. We have great chemistry, and we all believe in each other.”

Shadow Ridge finished second in the Sky League before eliminating Durango 38-7 and Las Vegas 65-37 to reach the championship game.

The Mustangs (9-2) have used their double-wing attack to great effect, led by Jaquieze Holland’s 1,714 yards and 22 touchdowns rushing.

“How fast he hits the hole and the punishing running style he has at the second level have been remarkable,” Foster said. “He’s definitely taken us to a whole other level with his physicality, his work ethic, his attitude. It embodies all of us at this point.”

Shadow Ridge has made it no secret that it hopes to play keep-away from the Skyhawks by running the ball and controlling the clock.

In the regular-season meeting, the Mustangs turned the ball over twice on fourth down, fumbled on their second possession and threw a pick-six, which turned into 28 Silverado points, and “we lost by 21,” Foster said.

But there were issues on both sides of the ball.

“We didn’t do our jobs. We weren’t as physical,” Shadow Ridge linebacker Royasen Mokiao-Fa’agai said. “That was rough for us, but we’ve come really far. We have our personnel down and all of our line schemes, and I think we’ll be fine.”