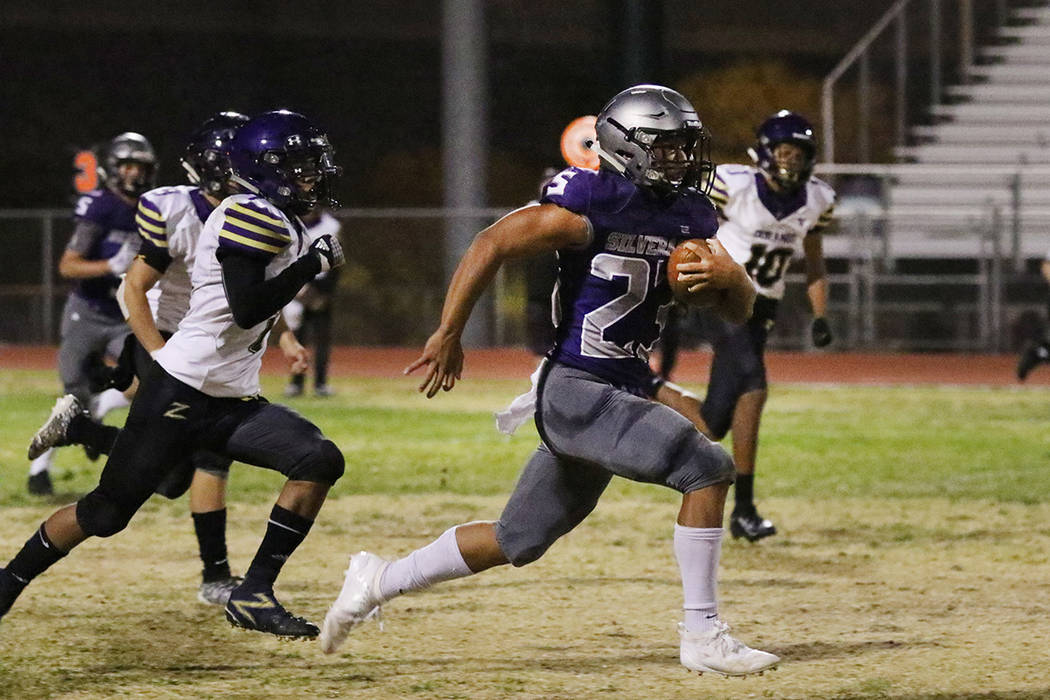 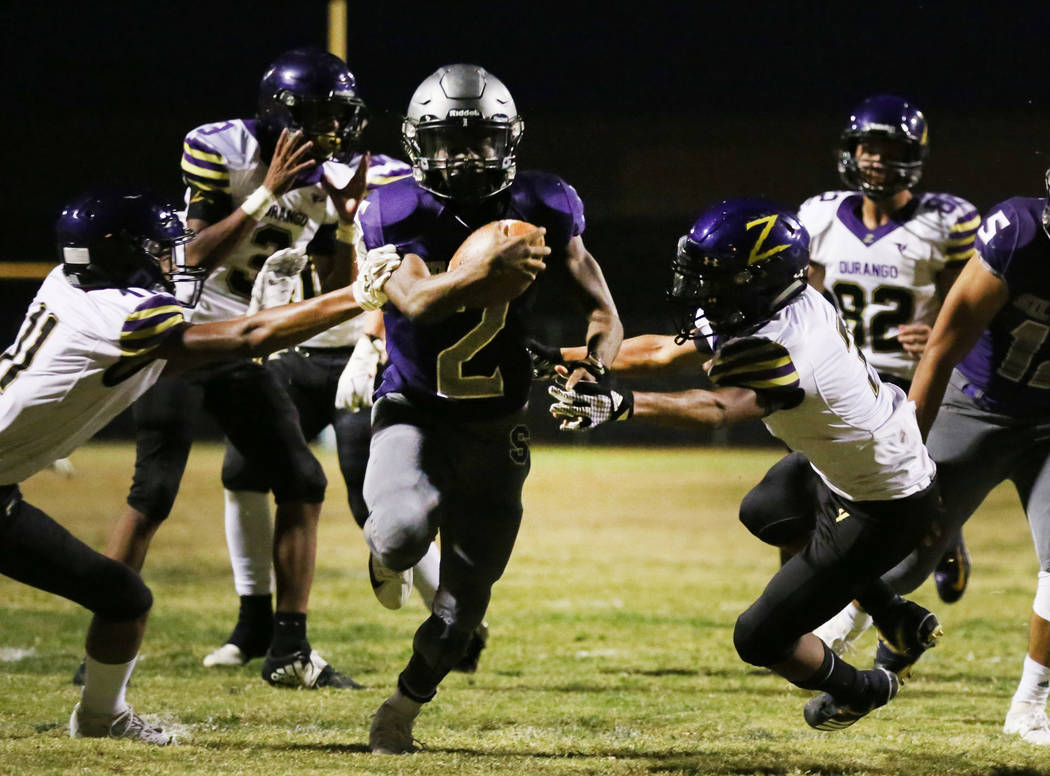 Silverado High's running back Aginae Cunningham (2) scrambles away from Durango High defense as he goes for a touchdown during the second quarter of their football game on Friday, Sept. 20, 2019, at Silverado High School in Las Vegas. Bizuayehu Tesfaye/Las Vegas Review-Journal @bizutesfaye 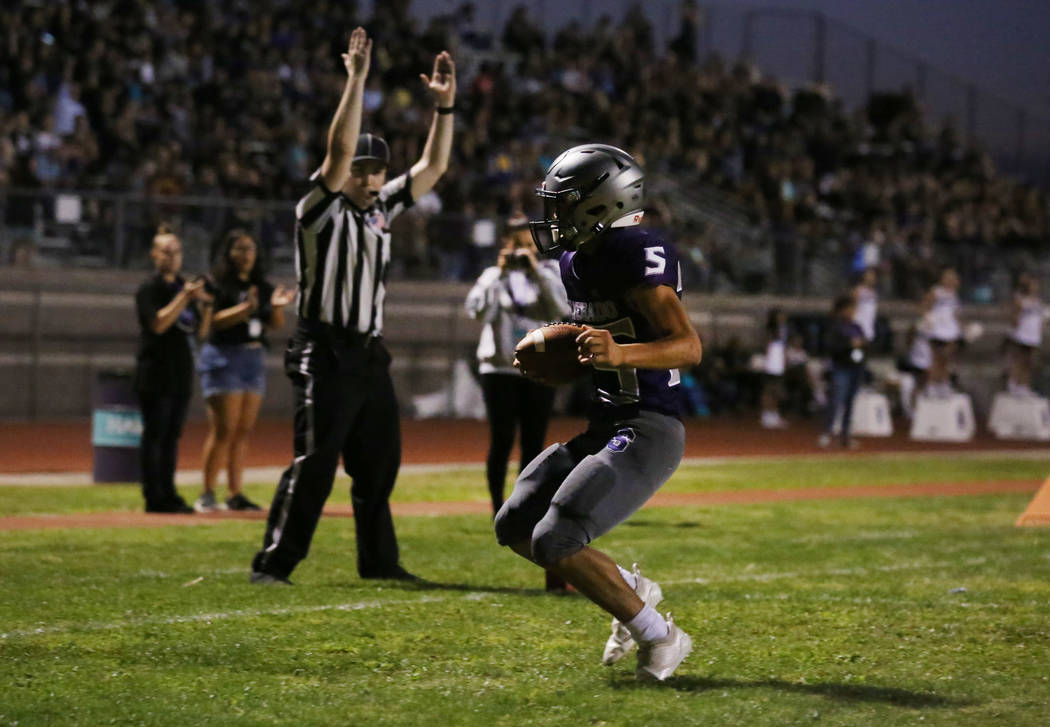 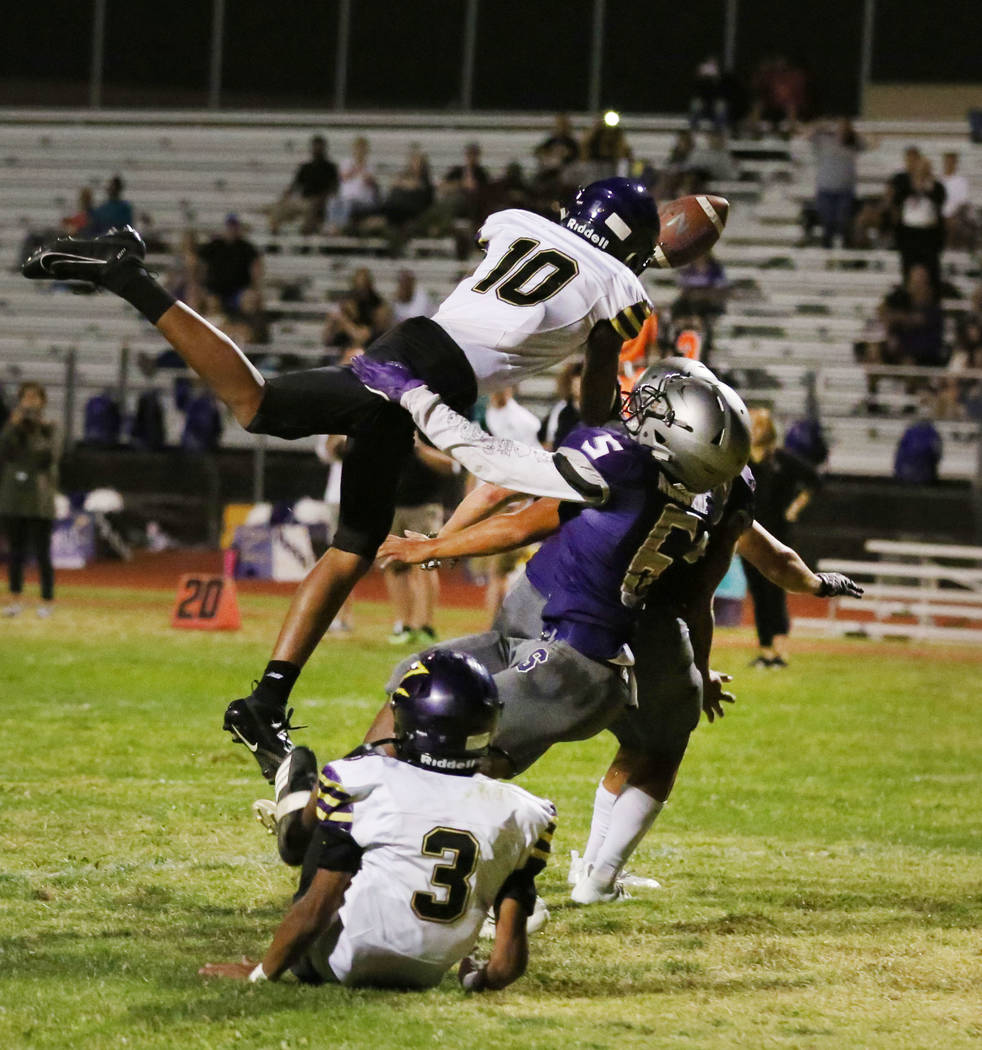 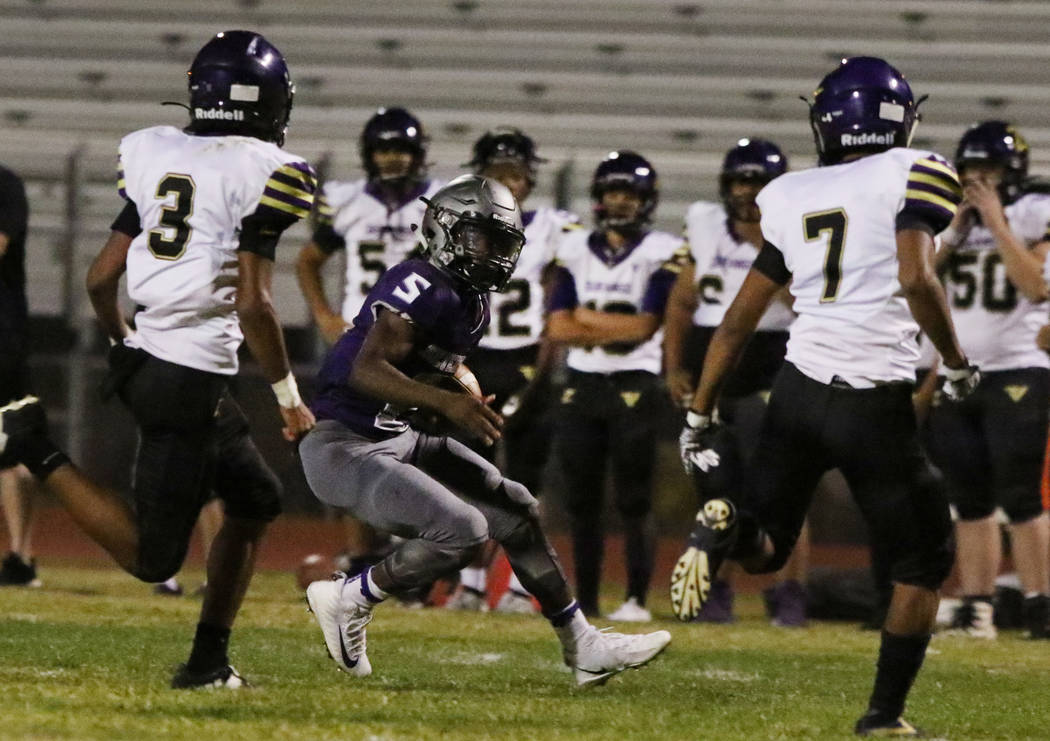 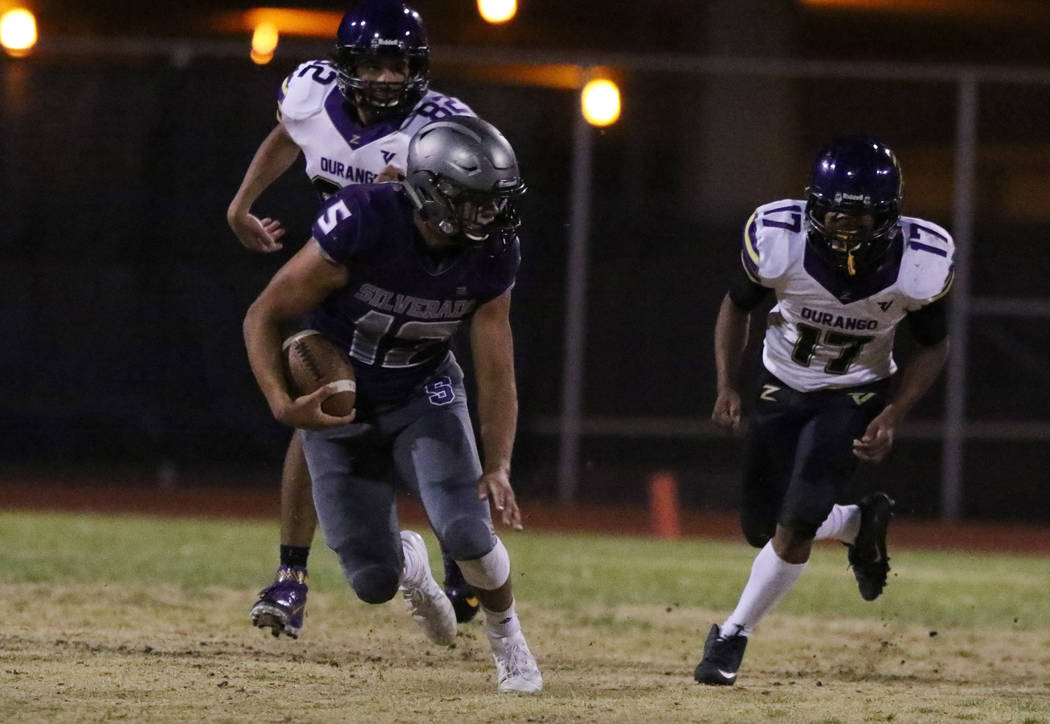 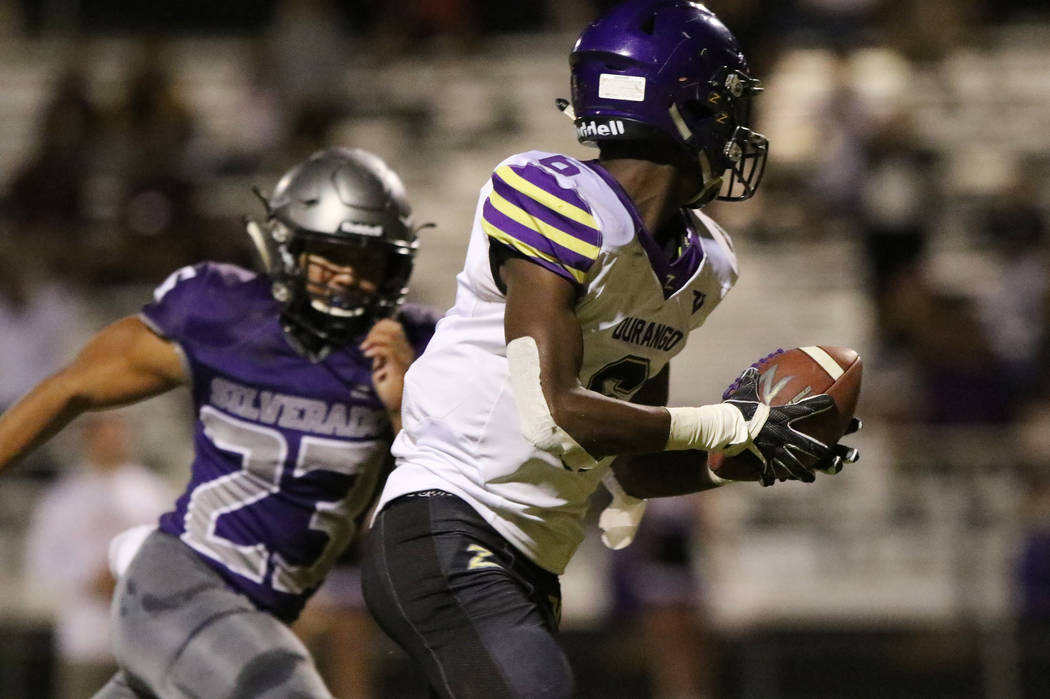 Durango High's Michael Hayword (6) runs with the ball for a touchdown as Silverado's High's running back Breven Palpallatoc (23) looks on during the second quarter of their football game on Friday, Sept. 20, 2019, at Silverado High School in Las Vegas. Bizuayehu Tesfaye/Las Vegas Review-Journal @bizutesfaye 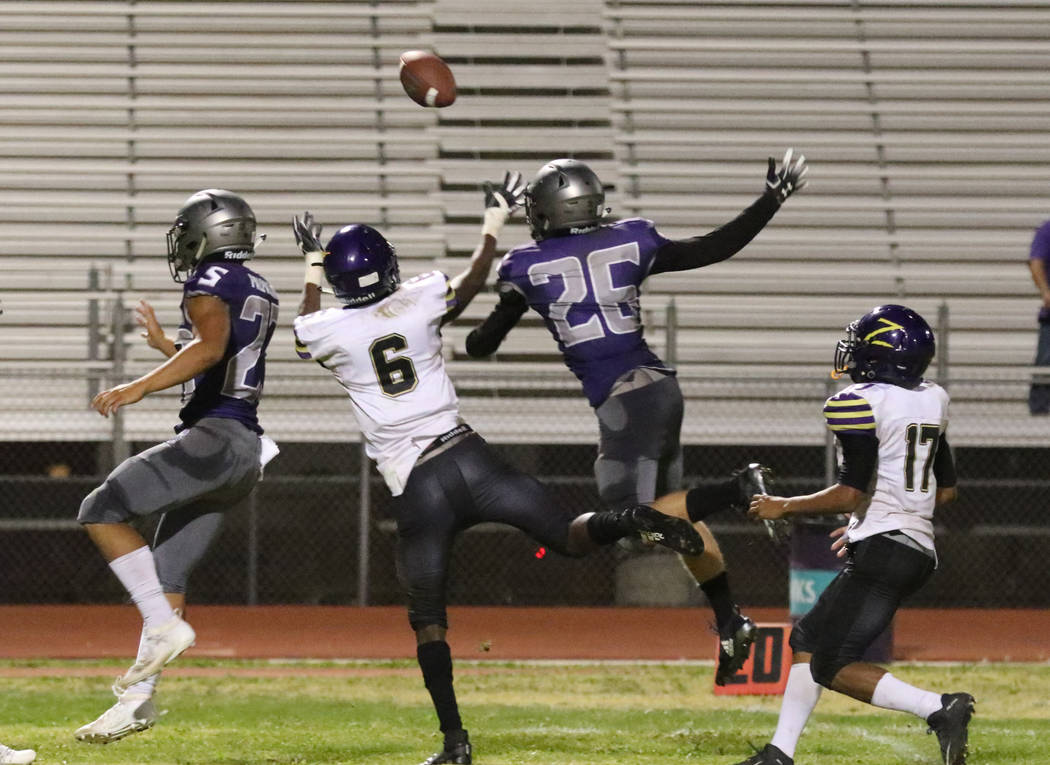 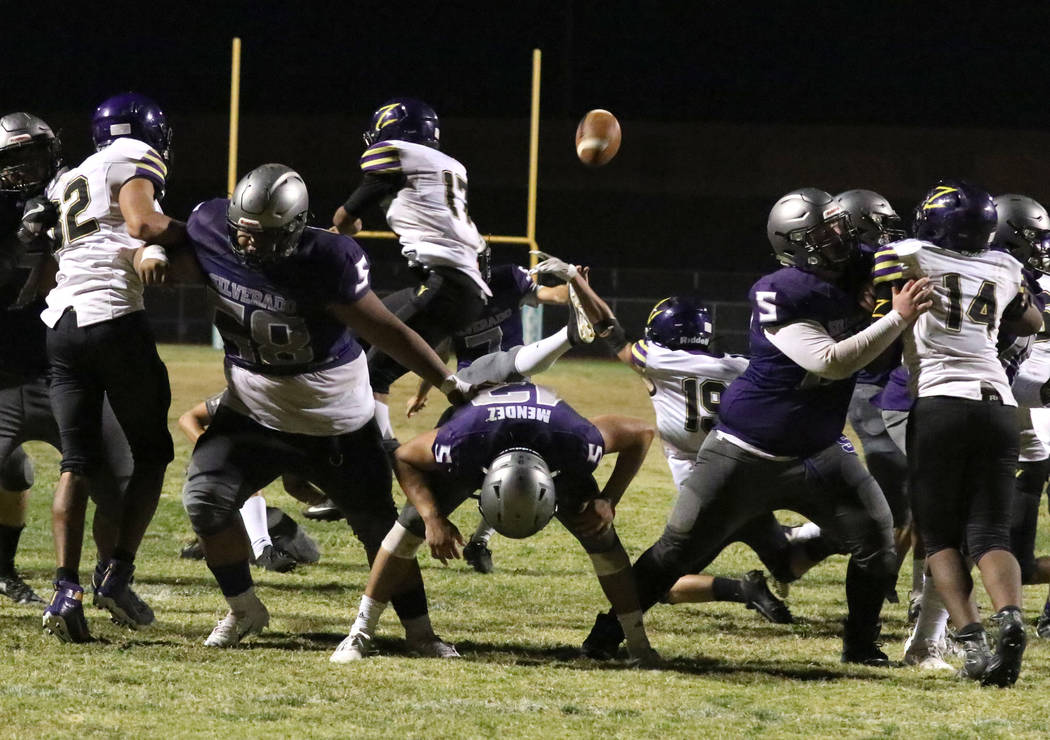 Silverado’s Breven Palpallatoc carried the ball just four times Friday night, but he definitely made the most of his few opportunities.

The senior running back, who finished with 141 yards and two key touchdowns, turned momentum in the second half to lead the Skyhawks to a 36-28 home victory over Durango in the Southwest League opener for both teams.

Palpallatoc’s 42-yard scoring sprint early in the third quarter gave Silverado (3-1, 1-0) the lead for good while awakening an offense that looked lethargic at times in the first half.

“Obviously, that long run to put us up was huge,” said Skyhawks coach Andy Ostolaza. “And he hit them twice with it.”

Palpallatoc did not touch the ball again until the first play of the fourth quarter, when he powered through the Trailblazers’ defense and sprinted to an 85-yard touchdown to put Silverado ahead 36-21.

Things didn’t look so promising early, as Silverado fumbled on its opening play, leading to a 1-yard TD plunge by Ryan Cabase to put Durango (1-4, 0-1) ahead 7-0.

The Skyhawks battled back, going ahead 8-7 on a Jeremy Alipio 2-yard fumble recovery. They stretched it to 15-7 on Aginae Cunnigham’s 2-yard TD run with 4:58 remaining in the first quarter.

But the Trailblazers took control from there with TD passes from Cabase to Dalin Knighten and Michael Hayword to take a 21-15 lead into the half.

“The big thing was that their quarterback was throwing the ball downfield to make big plays, and that caused us problems,” Ostolaza said. “At halftime we made some personnel changes.”

Palpallatoc turned things around for Silverado with his first TD early in the third quarter, and Cunningham rode that momentum for a 44-yard TD run just over two minutes later.

Costly penalties led to several squandered opportunities for the Trailblazers in the second half, including a 16-play, 75-yard drive late in the third that ended with a blocked field goal. They finally scored on a desperate drive when Cabase connected with Hayword for an 18-yard TD pass that made it 36-28 with 1:42 left to play.

Ostolaza said the win was a team effort and a display of depth that slowly wore the Trailblazers down.

“We grind on teams because our offensive linemen don’t have to go both ways,” the coach said.

Cunnigham carried 25 times for 166 yards to help the Skyhawks, and teammate Jacob Mendez racked up 73 yards on 10 carries.

Cabase completed 15 of 32 passes for 341 yards with one interception to lead Durango.