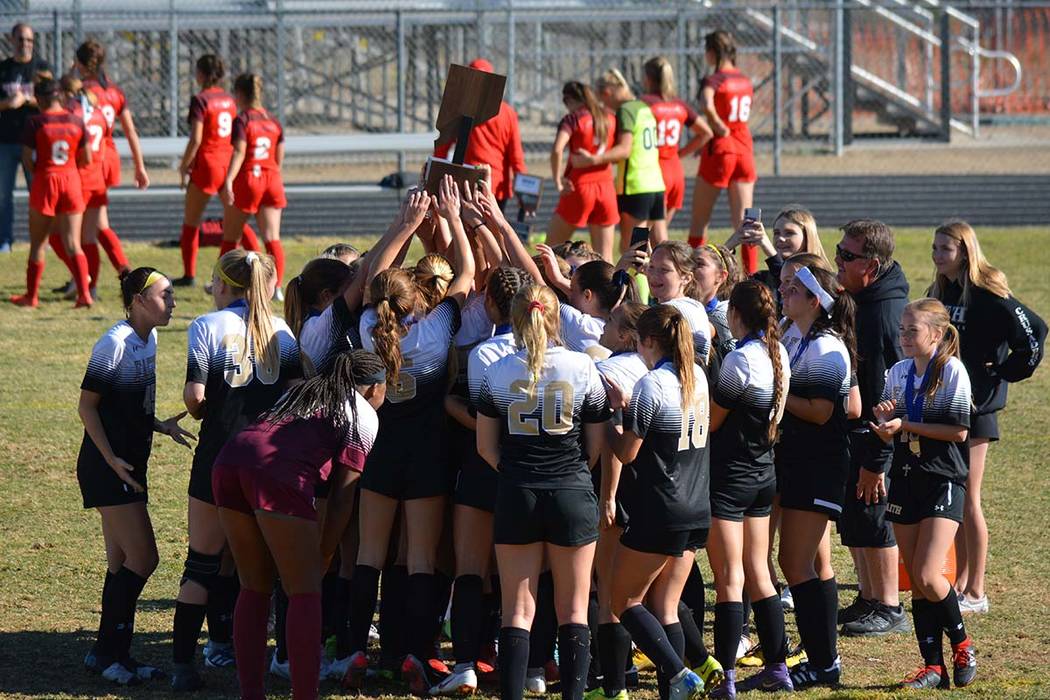 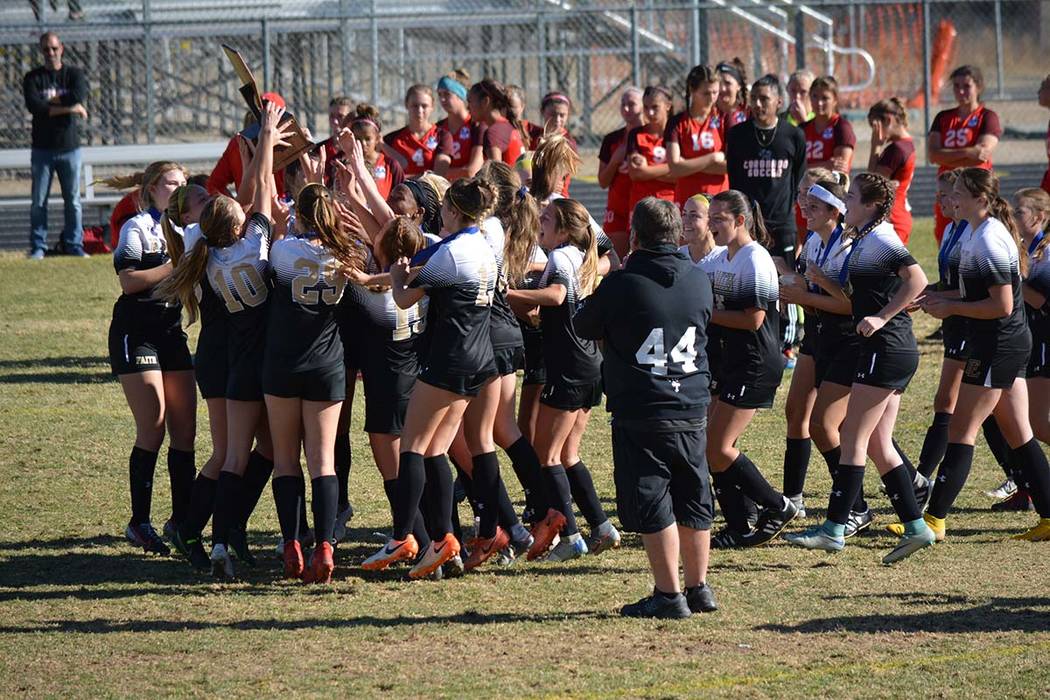 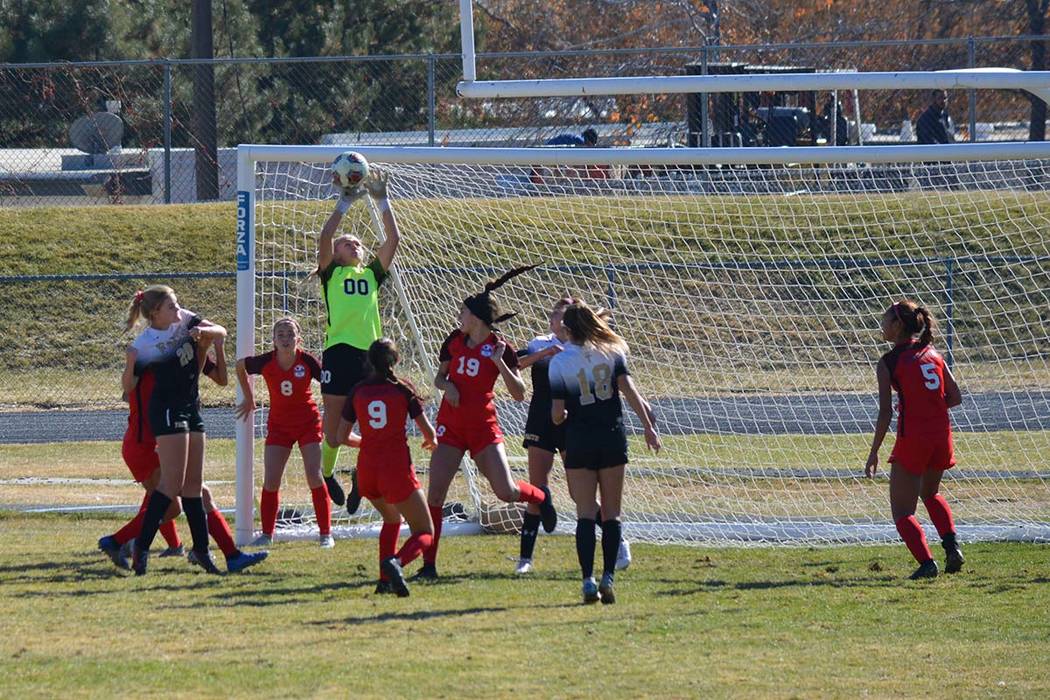 The Faith Lutheran girls soccer team attacks the Coronado goal during a 1-0 win in the Class 4A state championship game Saturday Nov. 15, 2019, at Hug High School in Reno. (Courtesy photo) 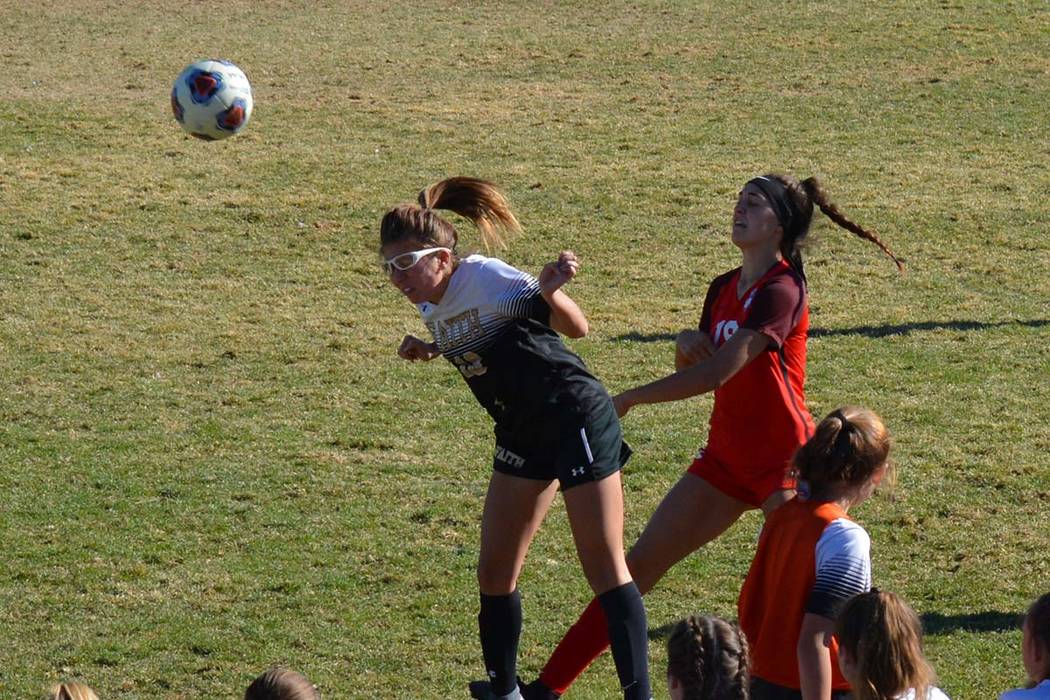 The Faith Lutheran girls soccer team gains possession during a 1-0 win over Coronado in the Class 4A state championship game Saturday Nov. 15, 2019, at Hug High School in Reno. (Courtesy photo) 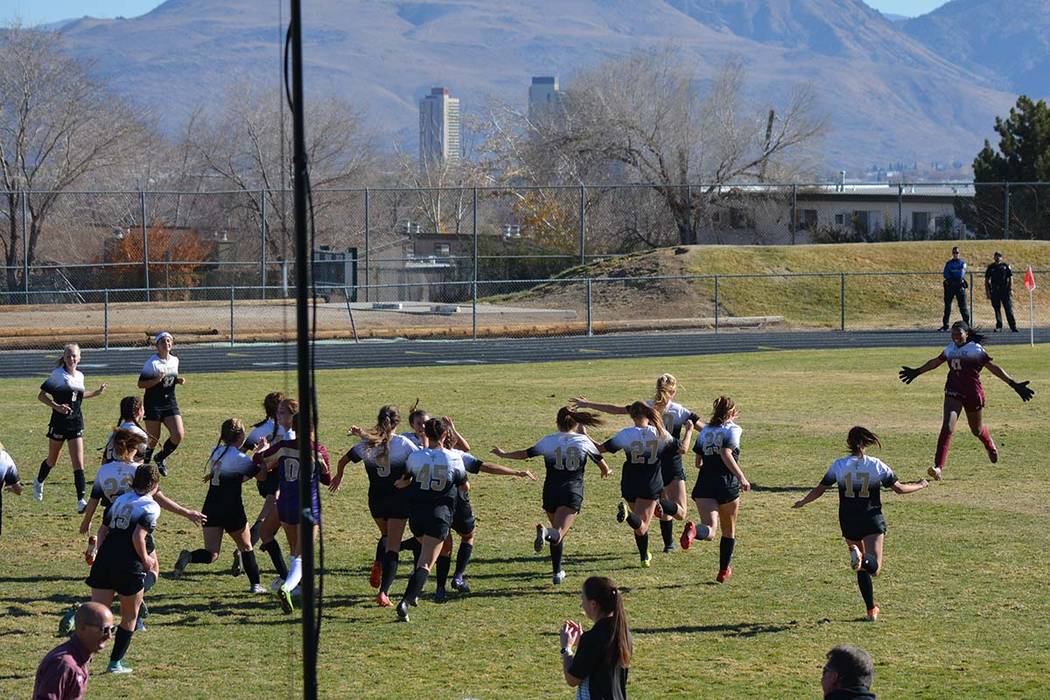 They were overlooked before the season as state contenders, both ascended to gain national recognition, both tied one game, and they finished the same way — with 1-0 victories that made them Class 4A state champions.

Faith Lutheran brought home the first Class 4A team title in school history in any sport and its second in girls soccer after a 3A crown in 2015. Gorman grabbed its sixth boys soccer title but its first since 2012.

“It couldn’t have been drawn up better,” Gorman senior Brophy Howard said. “I transferred in my sophomore year, and I didn’t know what to expect. We were like a little family, and we played the right way.”

The Gorman boys lost in the regional semifinals last season and were overshadowed by the team with which they shared the field, since the Gorman girls had won back-to-back state titles and entered the year with a 45-game unbeaten streak.

That streak reached 49 before Faith Lutheran ended it with a 2-0 decision. That early-season win sparked the Crusaders to believe they had a chance to reach the summit.

“That was a big win for us,” Faith Lutheran senior Amelia McManus said. “They had won state the last two years. Being around our team every day and seeing how much better we were getting, I thought we could actually do this.”

Gorman’s tie came early in the season, 2-2 against Arbor View. But the Gaels went unscathed the rest of the way. They got past Coronado 1-0 to win the Desert Region title, then blanked Spanish Springs 2-0 in the state semifinals.

That took Gorman (26-0-1) to the title game against Eldorado, and it was a “respectful game that didn’t have the grittiness high school games usually do,” Howard said.

The game also was scoreless until late, when Cole Malm was moved up from his left back spot to the midfield. He said coach Tommy Tate told him he would get one chance. He did, and he made the most of it. Caden Buckley won the ball in the midfield and sent a pass to Malm, who beat his man and put the ball in the corner of the goal.

“It was really special,” Malm said. “It was a really great way to end my senior year.”

The Gaels finished the season with a No. 12 ranking in the USA Today Super 25 national poll. That’s the same poll in which Faith Lutheran soared to as high as No. 3 before its only stumble, a scoreless draw with Centennial, and finished No. 8.

“We got a little too comfortable. That’s when that tie with Centennial happened,” Faith Lutheran junior Kennedy Lazenby said. “I think that was really our wake-up call for when we were going into those tougher games at the end of the season.”

The Crusaders (23-0-1) got another shot at Centennial in the Mountain Region final, but there was no comfort before that game. Five of their top players were away at a club tournament, so they had to dip into their bench for support.

Thanks to their usual stingy defense, which allowed only three goals all season, and two goals from McManus, they put away Centennial 2-0.

“There’s always a worry when you’re missing some of your best players,” Faith Lutheran junior Camille Longabardi said. “But the depth of this team made this season special and how we were able to pull off that victory.”

Faith Lutheran beat Douglas 3-1 in the state semifinals to set up a meeting with once-beaten Coronado for the championship. McManus scored late in the first half, and the defense did the rest. Goalkeeper Jordan Brown earned her 18th shutout of the season to help clinch the title.

“It’s definitely nice having (Brown) in the goal. It relieves a lot of pressure off me,” senior Bella Gutierrez said. “We have a strong midfield, and we’re strong all around. It’s not just one person or one position that’s good. Our midfield comes back and helps us keep the ball out of the back.”

Faith Lutheran and Gorman have a strong core returning and the opportunity to stay at the top for a while. But they’re also secure with the legacy they’ll have at their schools.

“It was crazy. It’s been seven years (since the last state title), and it’s nice to have it back,” Howard said. “There is pressure when you play at Bishop Gorman, and it’s great to win state and make history at the same time.”