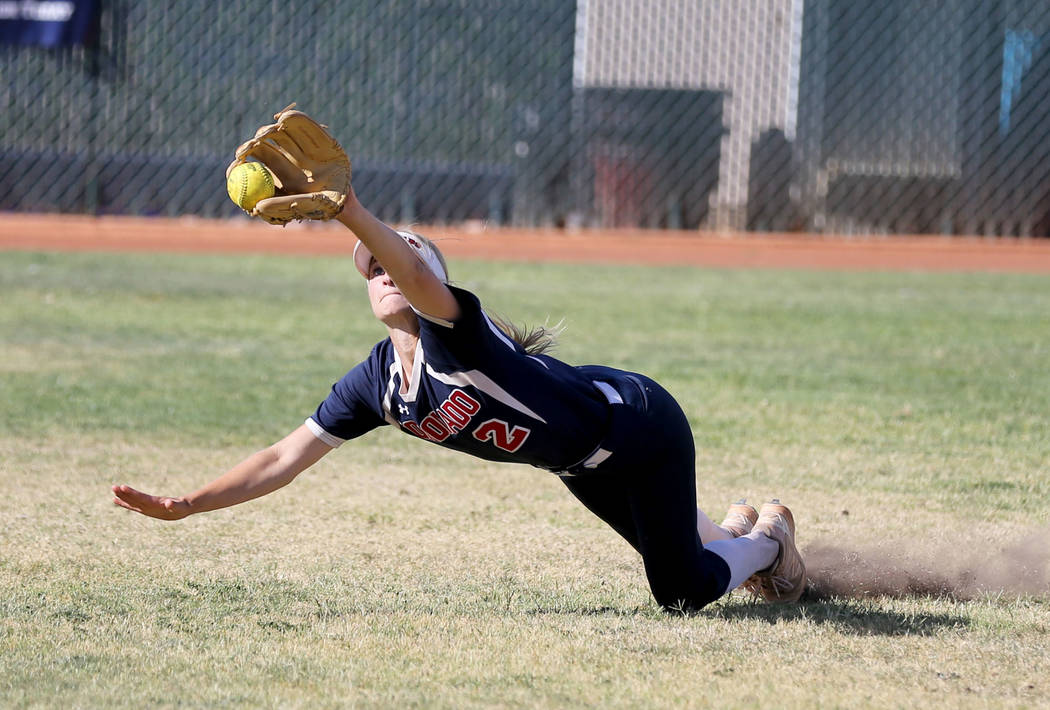 Coronado Veronica Jarchow (2) comes up short on a fly ball in the third inning of a softball game against Green Valley at Coronado High School Wednesday, May 9, 2018. K.M. Cannon Las Vegas Review-Journal @KMCannonPhoto 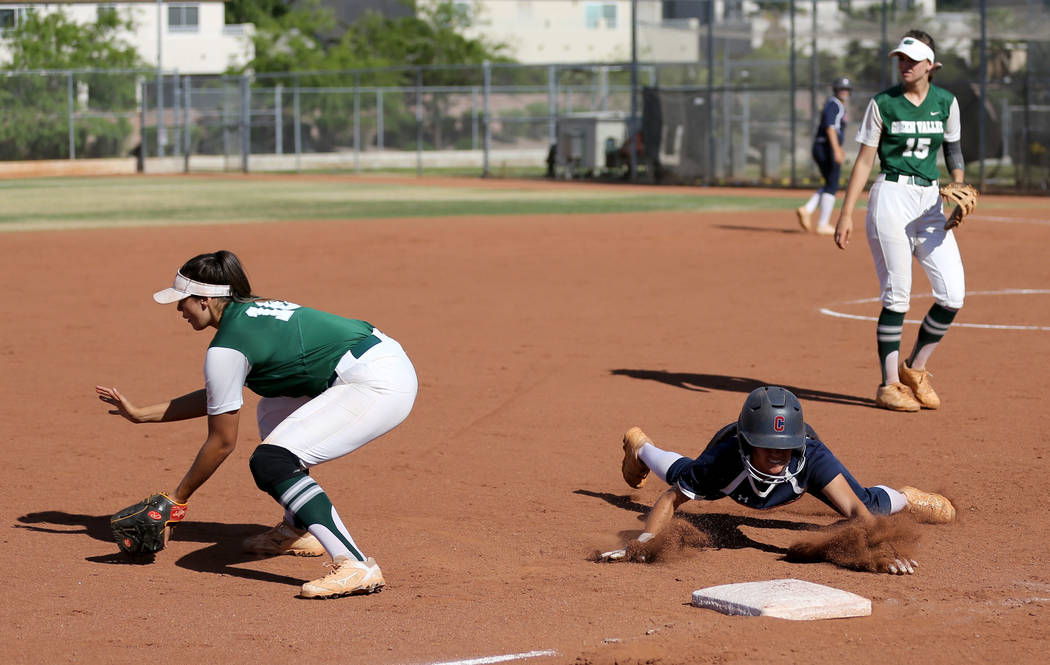 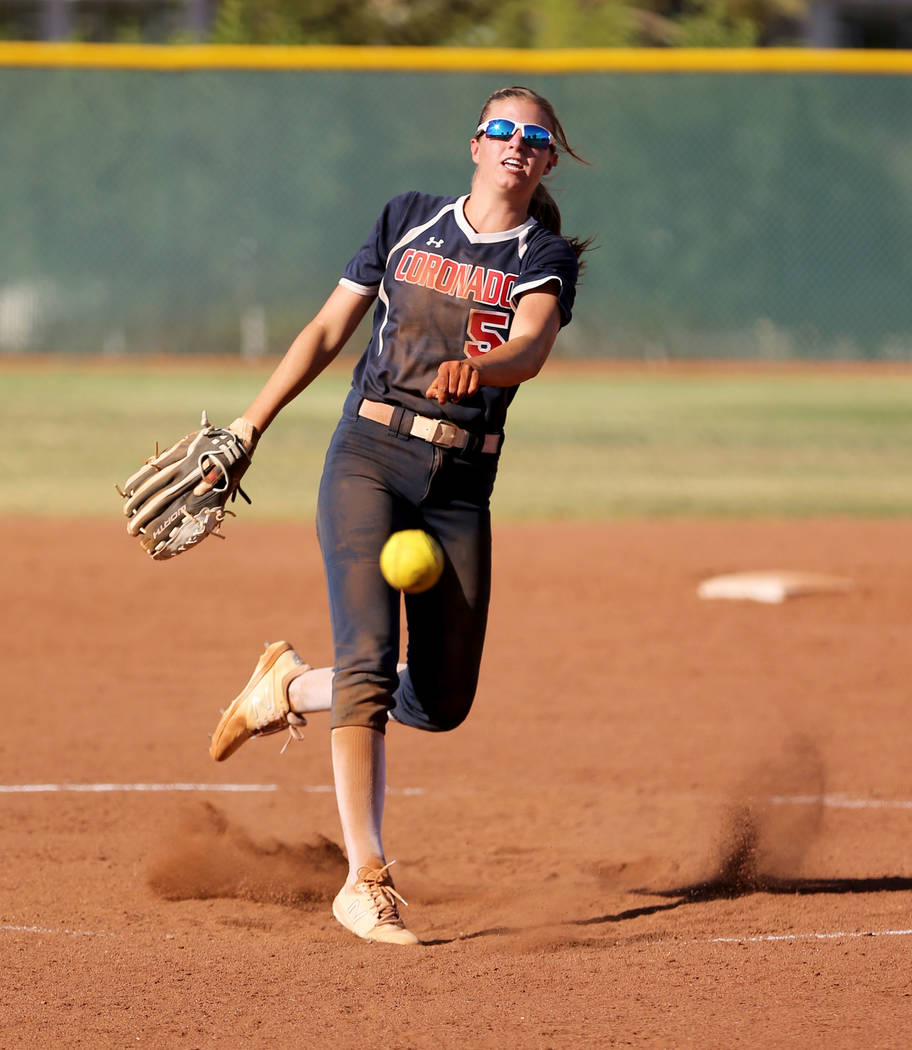 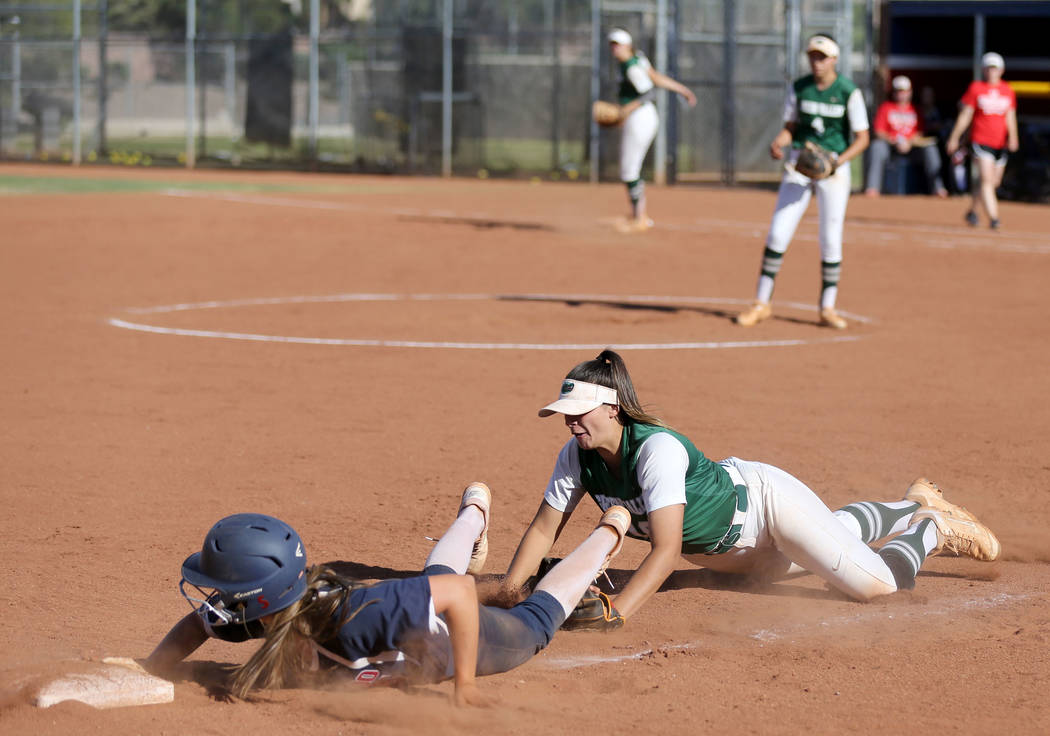 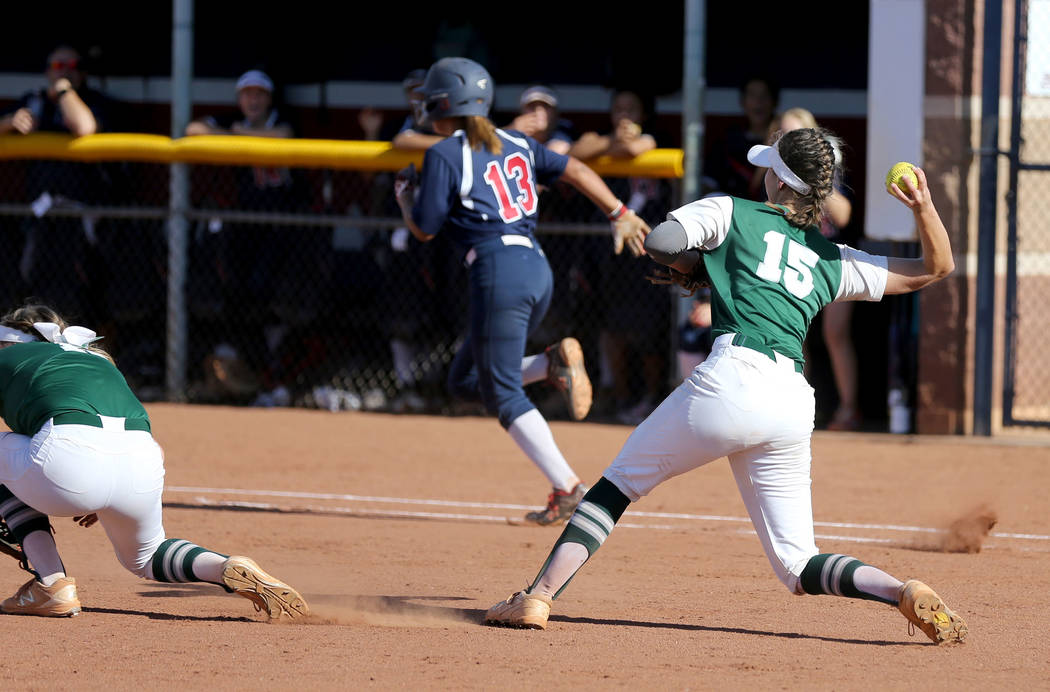 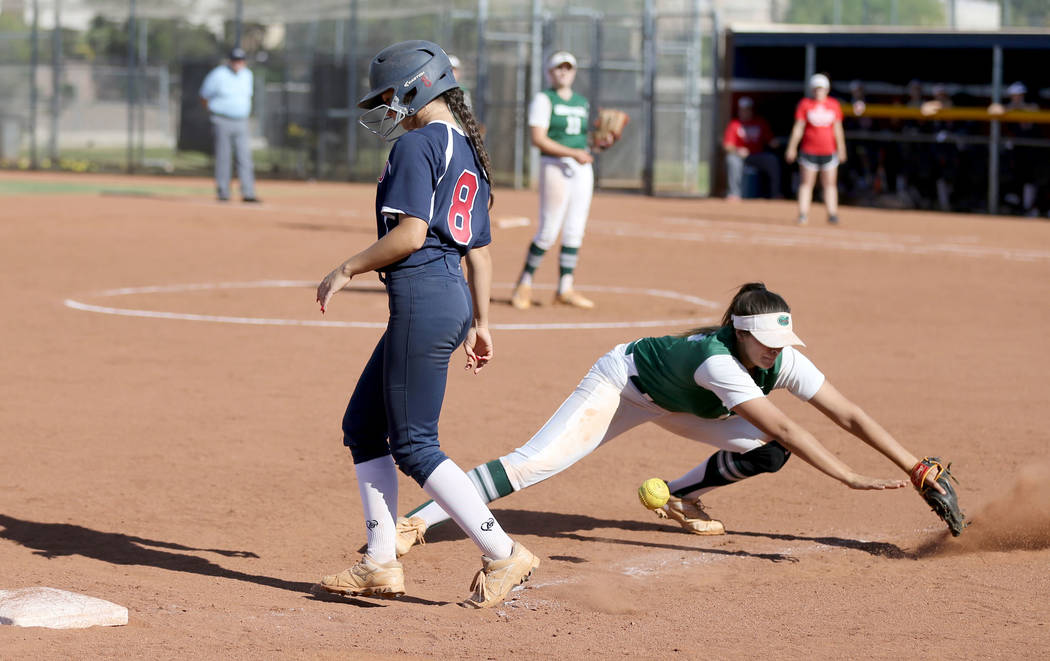 Green Valley Cristina De Los Angeles (18) bobbles the throw from home as Coronado baserunner Madi Stephens (8) goes back to third base in the second inning of a softball game against Coronado at Coronado High School Wednesday, May 9, 2018. Stephens was called out on the play due to interference. K.M. Cannon Las Vegas Review-Journal @KMCannonPhoto 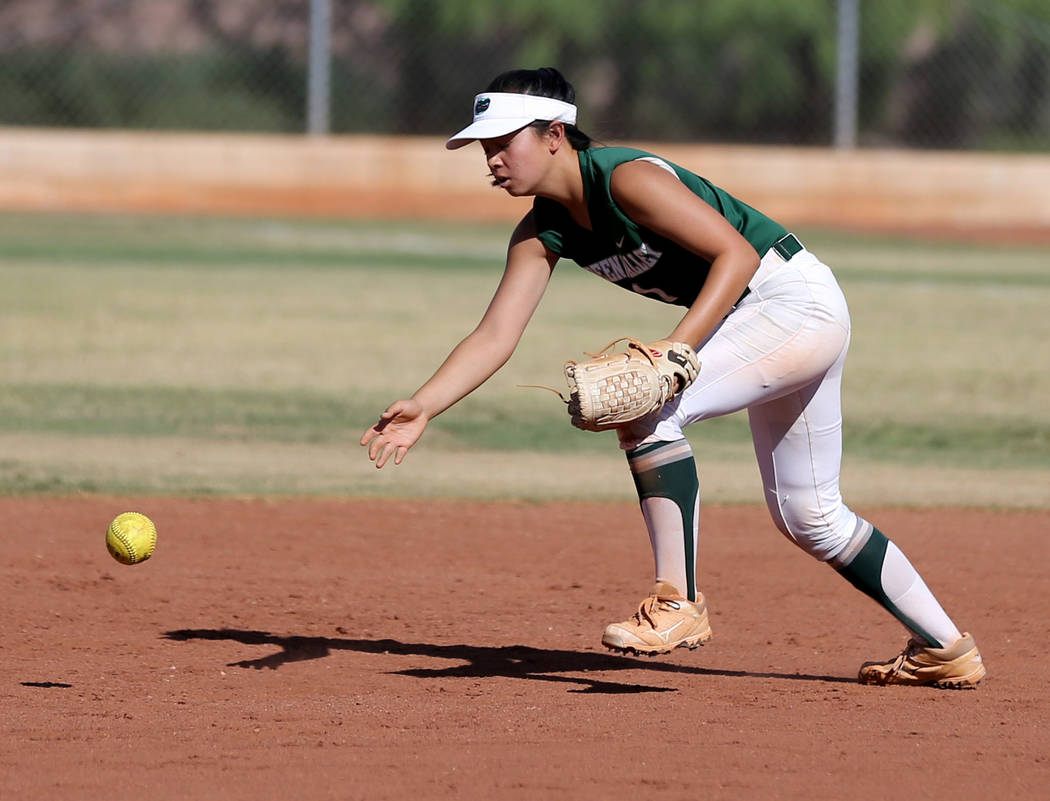 She had a lot of fun shutting down Basic.

Seumalo threw a complete game and propelled the Patriots to a 5-1 road victory in second round of the double-elimination Sunrise Region softball tournament.

Liberty lost to Basic twice — convincingly — during the regular season, making Wednesday afternoon all the more special given the circumstances.

“We reduced the errors, we had timely hits,” Patriots coach Jim Portese said.

And they had Seumalo.

The senior pounded the strike zone early in counts and let the Patriots make plays behind her. She cruised through Basic’s lineup, surrendering seven hits and one run while striking out four.

She had plenty of run support, too, as Liberty roughed up Basic star pitcher Shelby Basso in the middle innings. Sisters McKenzie and Morgan LaNeve both went 2-for-4 with two RBIs.

Shelby Carvalho went 1-for-4 with an RBI double.

“(We saw Basso) three times,” Portese said. “She’s one of the best … It was just a team effort. Give all the credit to my kids.”

Portese said he was proud of Seumalo, who also pitched in a victory over Rancho on Tuesday. She committed in the offseason to improving her conditioning, and it showed.

“Today, I prepared myself better — mentally and physically,” she said with a smile. “I love pitching, I love playing with this group of girls. It’s my senior year, and I want to keep winning.”

Coronado 15, Green Valley 0 — At Coronado, Tatum Spangler fired a four-inning, two-hit shutout with six strikeouts and went 2-for-3 with a double, two runs and two RBIs, leading the Cougars past the Gators (20-13).

Ashley Ward went 3-for-3 with a solo home run, two runs and two RBIs, and Isabel Rodriguez doubled, tripled, and drove in three runs for Coronado, which led 9-0 after three innings.

Madison Stephens supplied a triple, a run and an RBI for Coronado.

Rancho 12, Silverado 11 — At Rancho, Ayanna Potter was hit by a pitch with two outs in the bottom of the seventh inning to force in Kaitlyn Suarez with the winning run, as the Rams outlasted the Skyhawks in an elimination game.

Megan Johnson was 4-for-4 with a walk, two doubles, a triple, two RBIs, and three runs, and teammates Jessica Boothe and Megan Thomas each tallied three hits to lead Silverado (12-18).

Foothill 12, Eldorado 2 — At Foothill, Leah Becker went 3-for-4 with a home run, a triple, a double, two runs and three RBIs to lead the Falcons by the Sundevils in six innings in an elimination game.

Allie Fox tossed a six-hitter and struck out four for the Falcons.