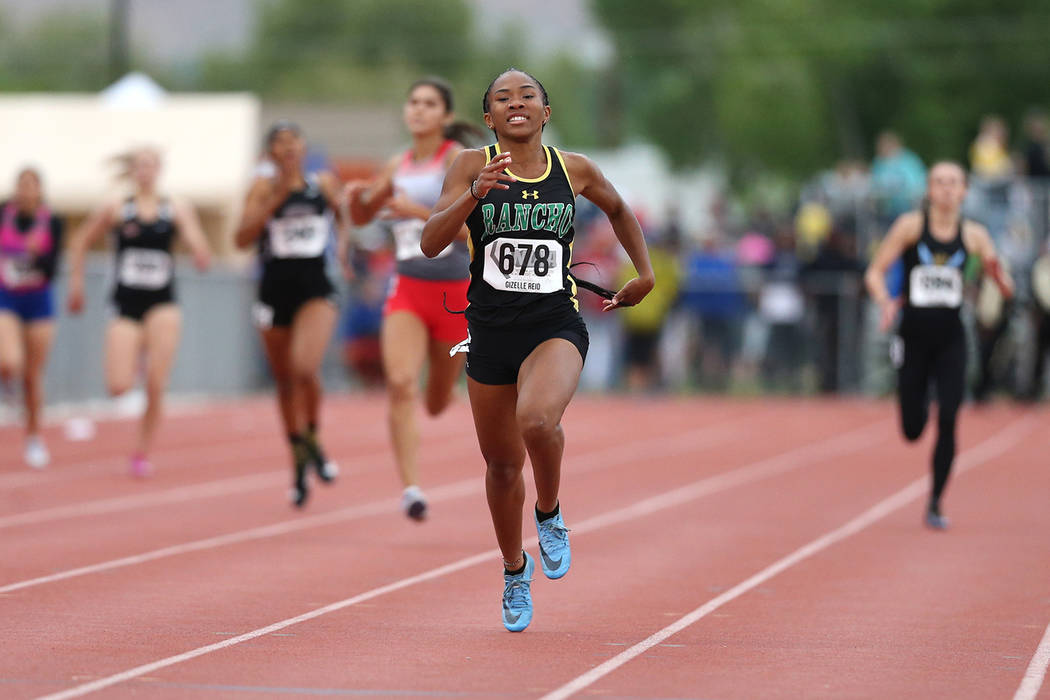 Rancho’s Gizelle Reid wins the 4A 400 at the NIAA Track & Field Championships at Carson High in Carson City, Nev., on Friday, May 18, 2018. Cathleen Allison/Las Vegas Review-Journal 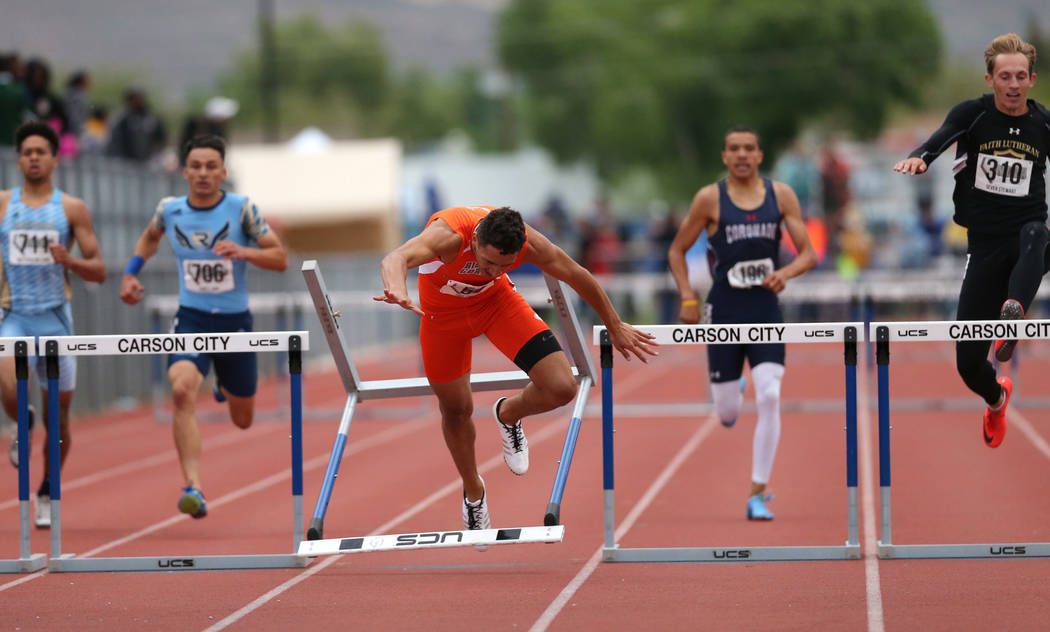 Bishop Gorman’s Jake Phillips crashes in the final stretch of the 4A 300 hurdles at the NIAA Track & Field Championships at Carson High in Carson City, Nev., on Friday, May 18, 2018. Cathleen Allison/Las Vegas Review-Journal 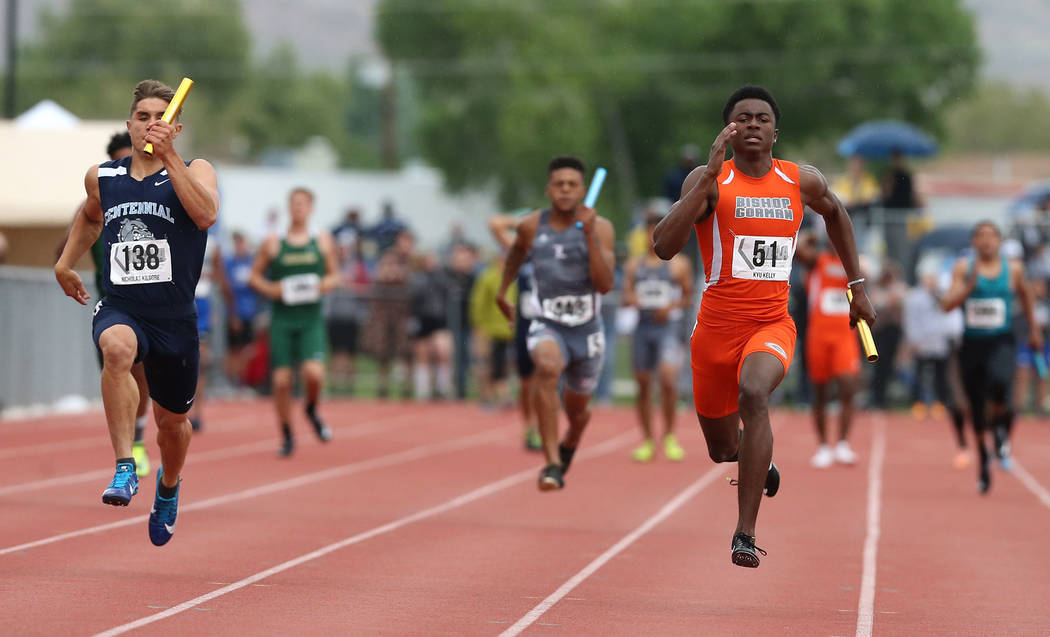 Kyu Kelly runs the anchor leg as Bishop Gorman wins the 4A 400 relay at the NIAA Track & Field Championships at Carson High in Carson City, Nev., on Friday, May 18, 2018. Cathleen Allison/Las Vegas Review-Journal 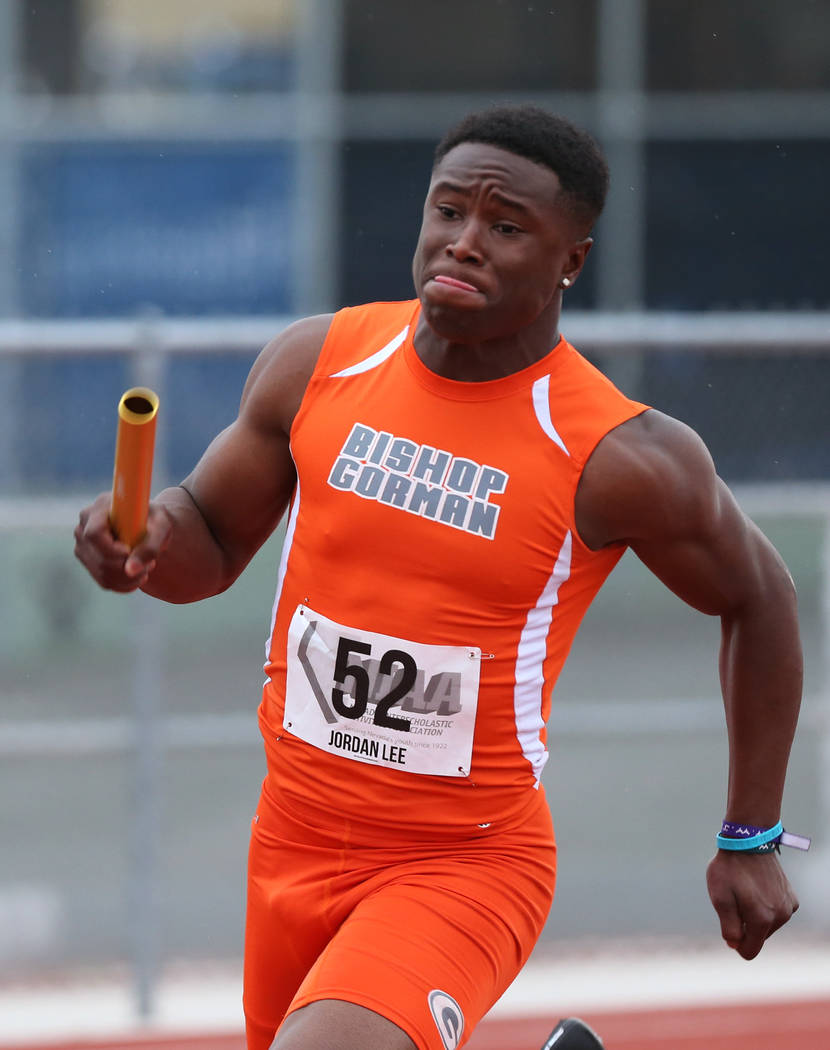 Jordan Lee runs the first leg as Bishop Gorman wins the 4A 400 relay at the NIAA Track & Field Championships at Carson High in Carson City, Nev., on Friday, May 18, 2018. Cathleen Allison/Las Vegas Review-Journal 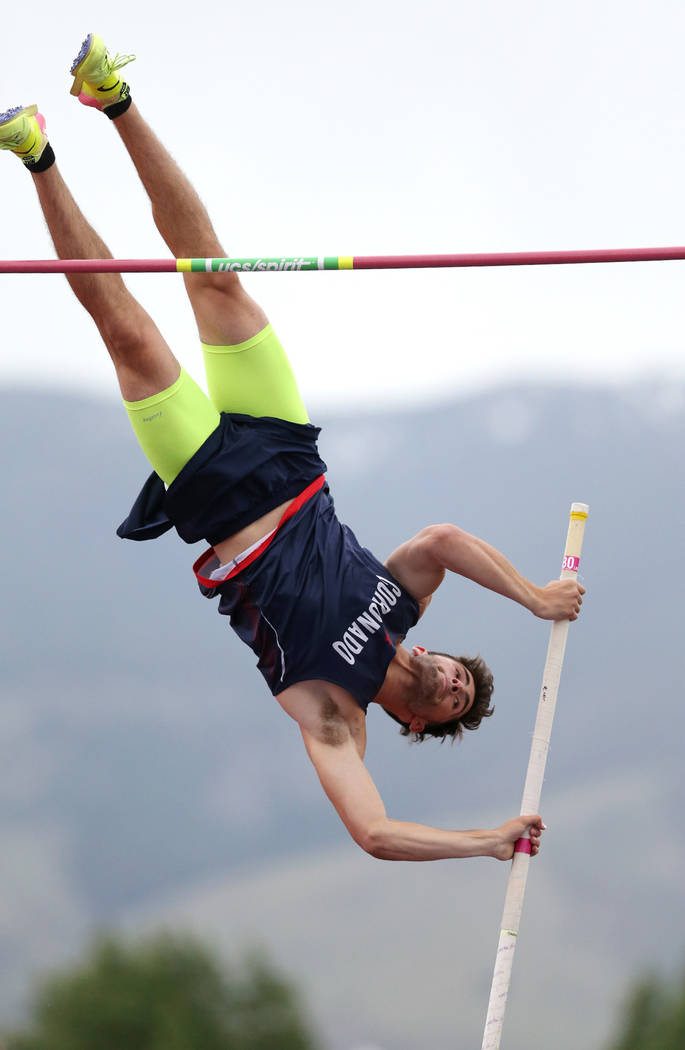 Coronado’s Edward Andrews clears 15-0 in the pole vault to tie for the title at the NIAA Track & Field Championships at Carson High in Carson City, Nev., on Friday, May 18, 2018. Cathleen Allison/Las Vegas Review-Journal 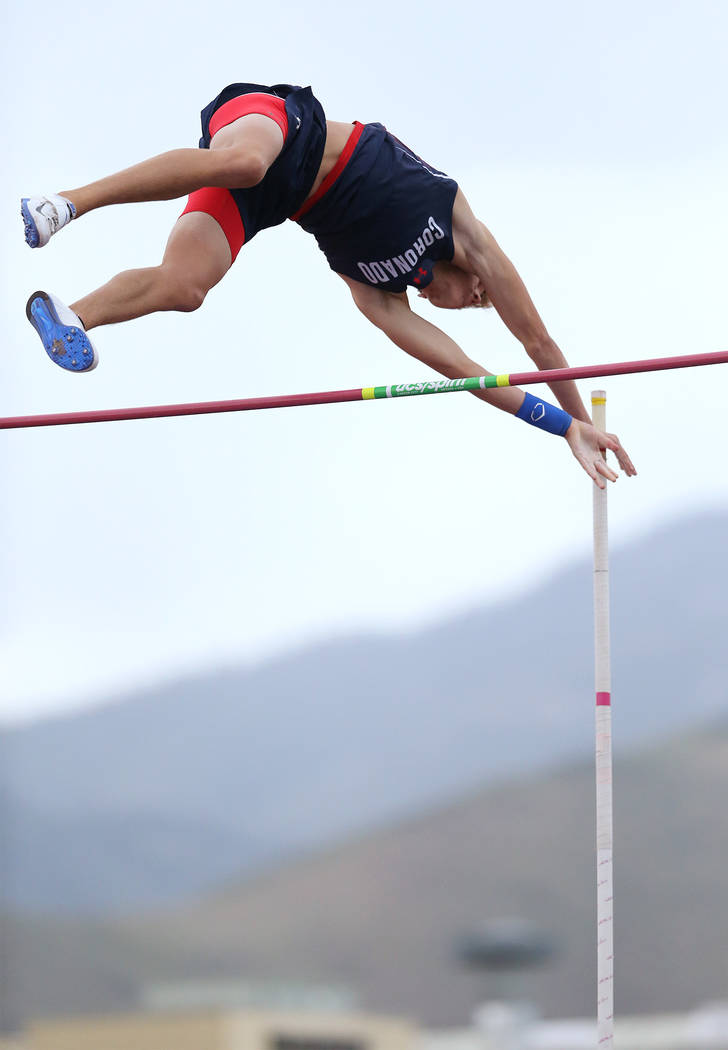 Coronado’s Keaton Daniel clears 15-0 in the pole vault to tie for the title at the NIAA Track & Field Championships at Carson High in Carson City, Nev., on Friday, May 18, 2018. Cathleen Allison/Las Vegas Review-Journal 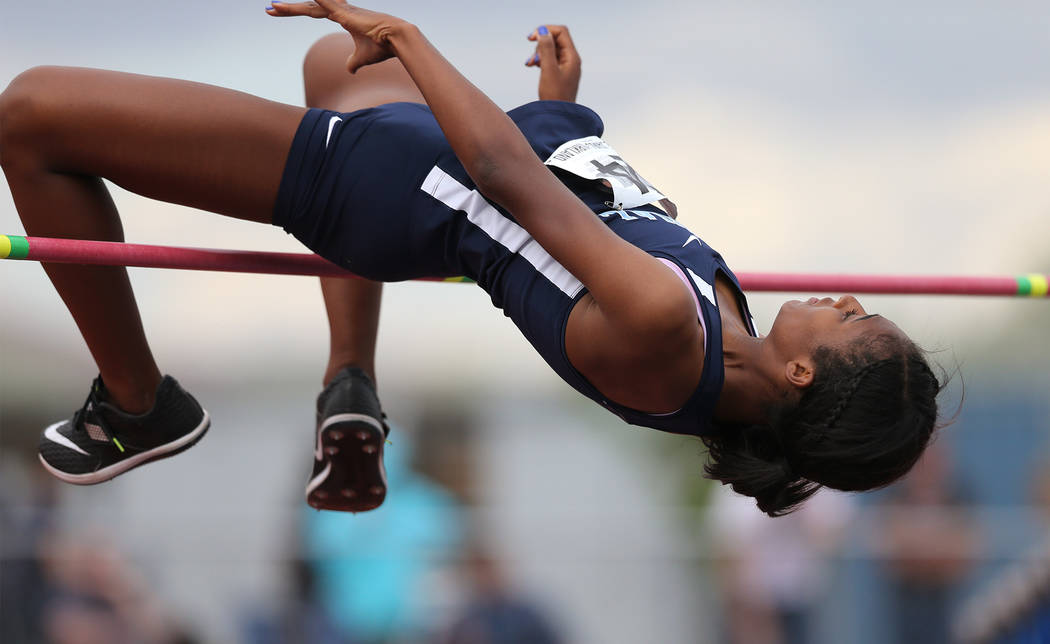 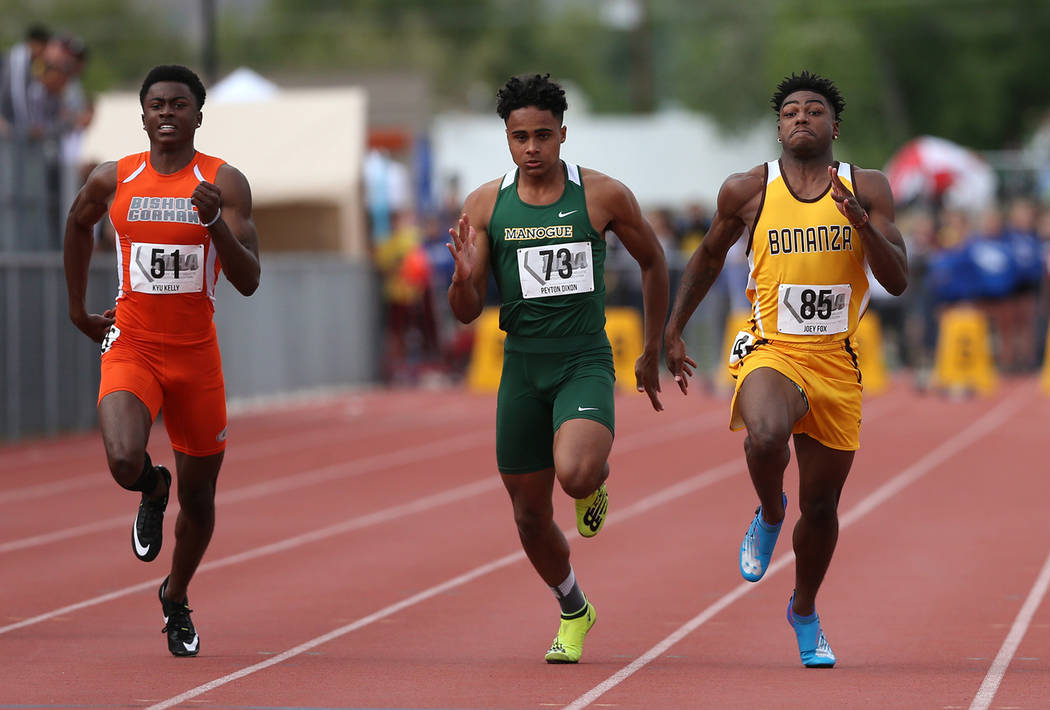 You wouldn’t know it.

The Rams foursome completed the race in 1 minute, 39.64 seconds to win the Class 4A state championship for the second consecutive year, and set a stadium record at Carson High School on Friday afternoon.

“This is the last time I’m probably ever going to run with this group, with these girls,” said senior Jordan Davis, who anchored the relay for the first time. “I’m really glad we got out here and set a new record.”

The new duo built a sizable lead, and regulars Edmond and Davis pulled away during the final lap to win by roughly 30 meters.

“They kind of surprised me. I didn’t predict that time,” Morrison said. “I guess they were ready. I’m proud.”

Reid and Williams sat out the relay to focus on their individual events. Reid won the 400-meter dash in 54.75 seconds, and Williams won the 200 in a meet record time of 23.85.

The Rams are in second place in the team portion of the meet behind Centennial, which has 46 points and has won the last seven Class 4A state championships.

Liberty, in fourth place, is the third among local programs.

Both the Bulldogs and Rams are in prime position to earn more points tomorrow with multiple athletes in multiple events.

One was close. One wasn’t.

Nailor completed the race in 10.7 — one hundredth of a second faster than Bonanza’s Joey Fox — to win the Class 4A state championship via photo finish.

An hour later, he teamed with JoJuan Claiborne, Jordan Lee and Kyu Kelly to win the 400 relay in a personal-record and stadium-record time of 41.46.

“We just were ready all along,” Nailor said. “By the time I handed it off, I was still running around the track because I knew we were flying. I was hyped.”

Nailor, running in the first lane during the 100, ran stride for stride with Fox and edged him by a nose. He didn’t know he had won, he said, and credited the victory to his technique.

He’ll run the 200 and 800 relay Saturday for the Gaels, who are leading the team portion of the meet with 51 points. They’ll have a chance to add to their lead Saturday in the sprints, the jumps and the throws, all of which feature top Gorman athletes.

Coronado, in fourth, is second among local programs thanks to a tie for first in the pole vault between Keaton Daniel and Edward Andrews (15-0)