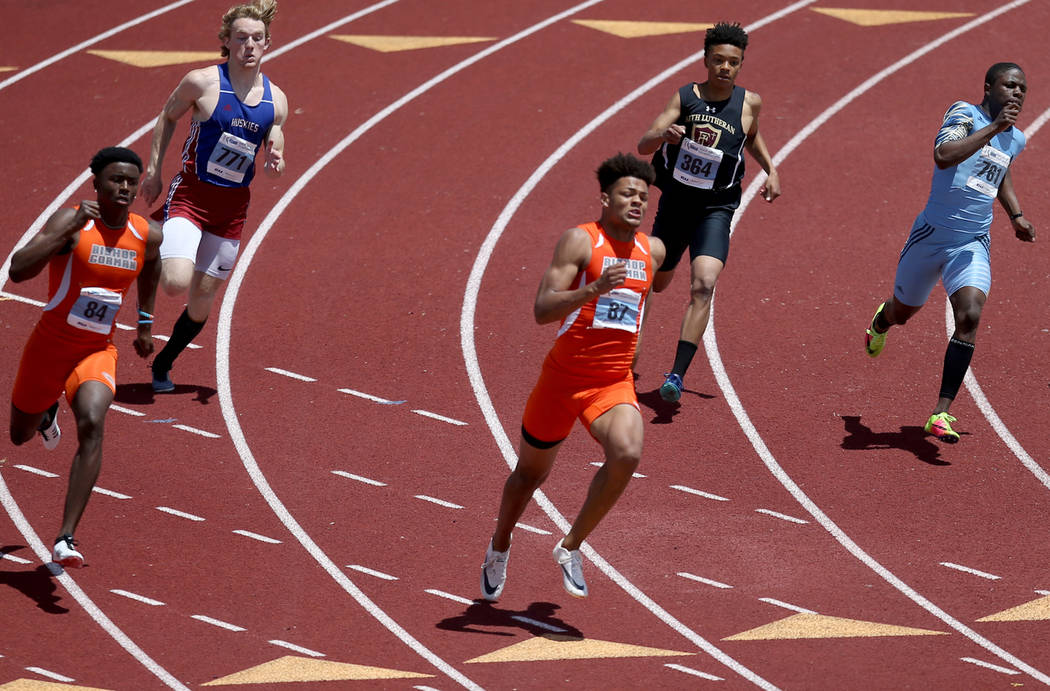 Rome Odunze Bishop Gorman, center, on his way to winning 200 meters with a time of 21.25 seconds in the state track meet at Desert Oasis High School in Las Vegas Saturday, May 18, 2019. Competing with Odunze are, from left, Kyu Kelly of Bishop Gorman, Benjamin Butler of Reno, Brian Dunn of Faith Lutheran and Malachi Bibbs of Reed. (K.M. Cannon/Las Vegas Review-Journal) @KMCannonPhoto 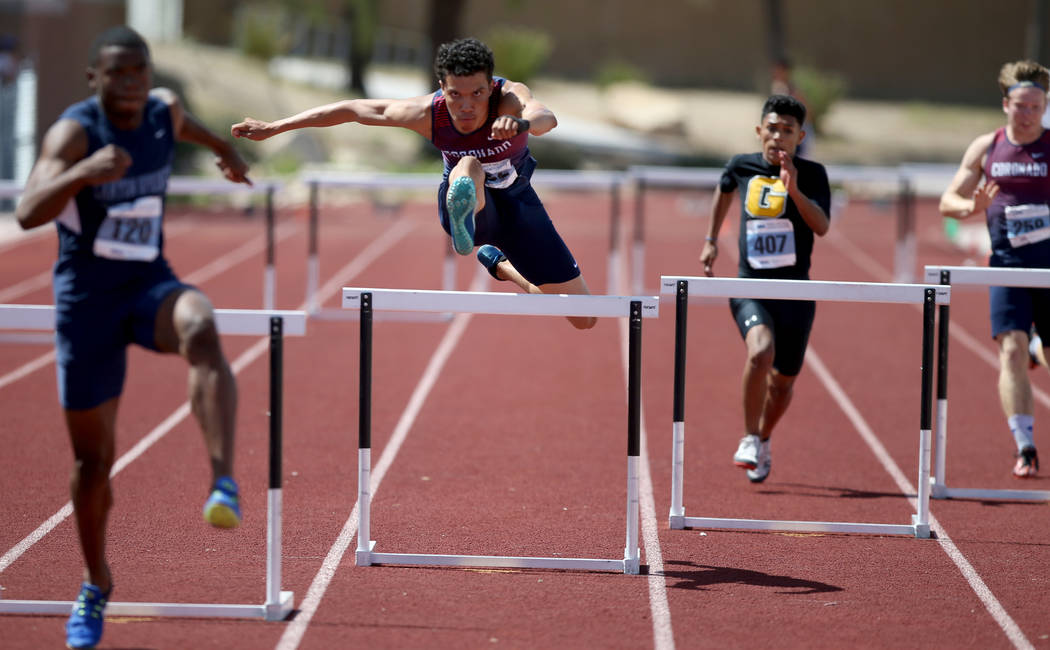 Justin Watterson of Coronado, second from left, on his way to winning Class 4A 300 meter hurdles in the state track meet at Desert Oasis High School in Las Vegas Saturday, May 18, 2019. Competing with Watterson, from left, are Torian Hammond Canyon Springs, Anthony Medina Medina of Galena and Reese Kimball of Coronado. (K.M. Cannon/Las Vegas Review-Journal) @KMCannonPhoto 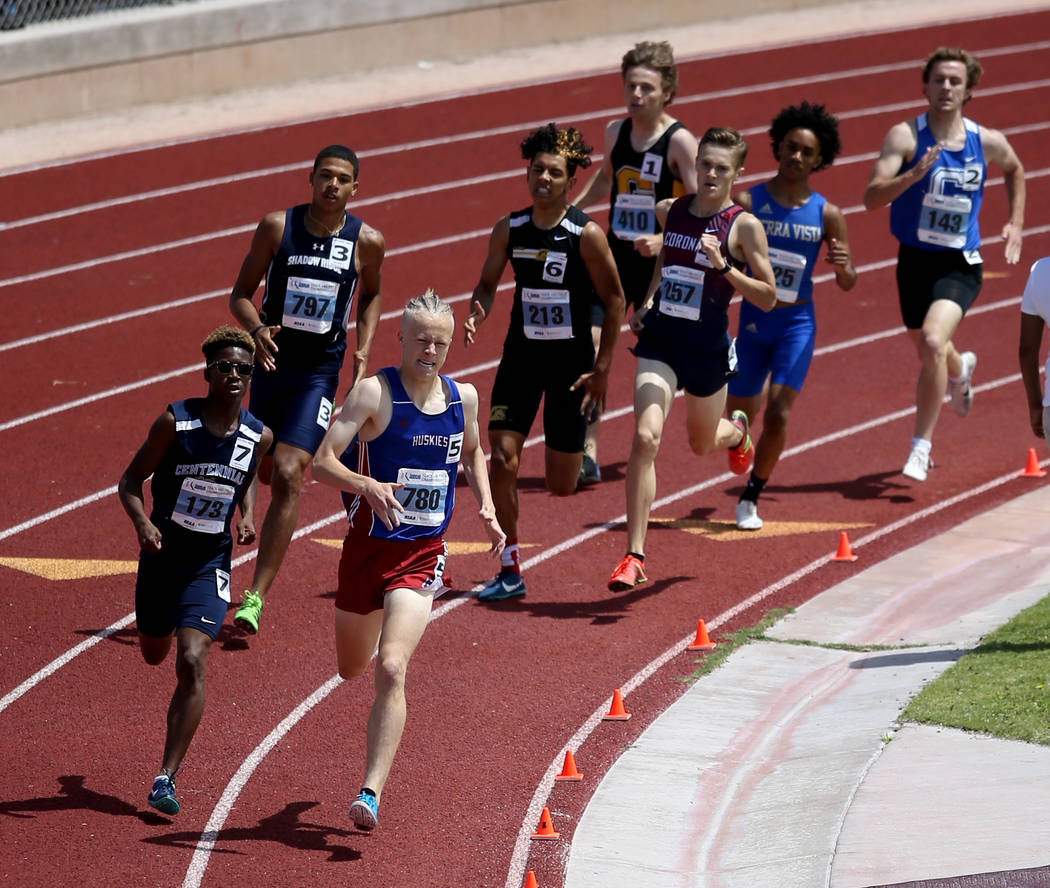 Noah Norris of Centennial, left, and Colby Thomas of Reno battle in the Class 4A 800 meters in the state track meet at Desert Oasis High School in Las Vegas Saturday, May 18, 2019. Norris went on to win with a time of 1:57.04. (K.M. Cannon/Las Vegas Review-Journal) @KMCannonPhoto

It didn’t take long to get a second one.

The Gaels took a sizable lead into Saturday’s final day of the Class 4A state championships at Desert Oasis and never let up.

Sparked by individual wins from Rome Odunze and Kyu Kelly, the Gaels wrapped up their second consecutive title by scoring 99 points. Centennial was second with 65 and Coronado third with 54½.

“Our kids really rose to the occasion,” said Gorman coach Scott Cooley, whose team led by 18 points at the midway mark of the meet. “This is a program that has just kept getting better every year. We had seven school records this week, and that’s just unheard of.”

“Kyu is such a special kid and such an amazing athlete,” Cooley said. “He’s the total package.”

Odunze won the 200-meter dash in 21.25 seconds, just ahead of Kelly. Both ran on the Gaels’ 400-meter relay team that was victorious Friday.

“Rome’s 200 was phenomenal,” Cooley said. “He has cleaned up a lot of things with his running technique. He is really committed.”

Coronado’s Justin Watterson had one of the meet’s feel-good moments.

After falling in the 110 hurdles Friday, Watterson won the 300 hurdles in 37.4, finishing off a race in which he was narrowly trailing Canyon Springs senior Torian Hammond before Hammond fell before the final hurdle.

“I honestly try not to focus on other runners,” Watterson said. “I still had to get over one more hurdle. I still had to finish the race.”

Watterson’s teammate, Elijah Hernandez, had to wait much longer to get his chance at redemption.

Hernandez won the 400 on Saturday, a year after he missed the state meet due to a badly bruised heel he suffered playing basketball with his family. Hernandez won in 48.19 seconds, holding off Las Vegas’ Miles Davis.

“He was getting a little close,” Hernandez said. “It was just the will to win. I had to give all I had left.”

Liberty’s Corey Moore finished off his domination of the throwing events, winning the discus (189-2) by nearly 30 feet and taking the shot put (55-4¾).

White Pine won the team title with 117½ points. Coral Academy Reno was second with 83, one point ahead of North Tahoe.

Zakari Tucker won the 110 hurdles in 16.08 and finished first in the triple jump with a mark of 41-7 to help Spring Mountain cruise to the team title.

The Golden Eagles scored 170 points. Sierra Lutheran was second with 98½, and Beatty was third with 62.