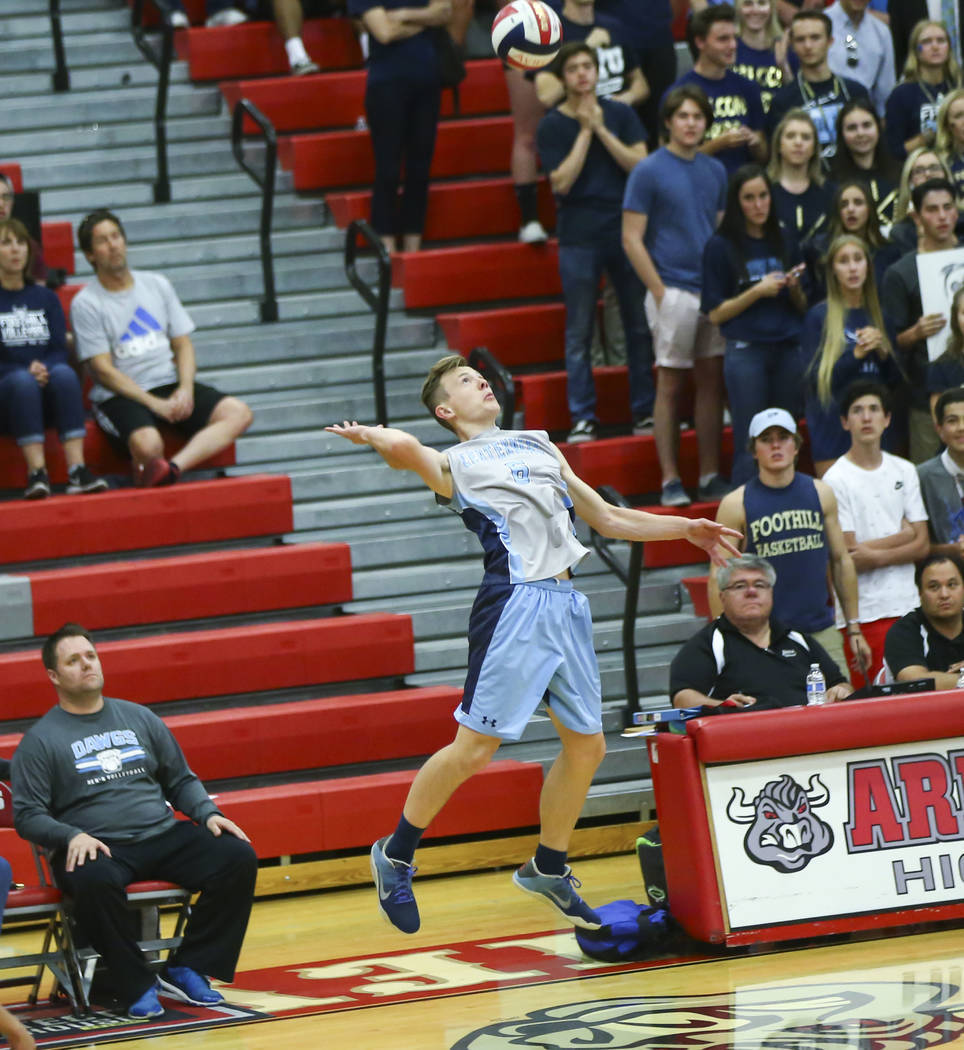 “We have five starters returning who are determined to make another deep run in the playoffs,” Clarke said. “The boys are ready to push each other each day to get better and reach the goals they have set for themselves this season.”

Outlook: Harvey takes over a squad that brings back only two starters after finishing fifth in the Sunrise League last year.

The Wolves have only four seniors on their roster.

Outlook: The Gaels bring back only three lettermen from last year’s squad.

“We are in the definition of a rebuilding year,” Nunley said. “We only have three returning varsity players. We have four freshmen on the team as well.

“We’re looking to learn during every match we play.”

Outlook: With only four lettermen returning, the Bengals will have plenty of new faces.

“We look to rebuild the team and be able to work together in a positive way,” Charles said.

Outlook: After playing as an independent last year, the Eagles officially join the Class 3A Southern League this year.

“We’re excited to be officially in the 3A region,” Rachelle Huxford said. “Our program is growing but has gained valuable experience in the past two years. We should be competitive with the teams in our region and look forward to the season.”

“We only return two starters but are reloading with talent as younger players have been working hard to fill some big shoes,” Davis said. “We are excited to see how this group responds coming off such a successful past season. Understanding how to master skill sets, develop mental toughness, and eliminate distractions from inherent expectations will be part of our process this season.”

Outlook: Sanders takes over a team that brings back only two starters.

“We will be a mixture of experience and youth,” Sanders said. “This balance should allow us to improve every day and compete in our division for a good playoff spot.”

Outlook: The Spartans bring back only two starters from last year’s squad.

“Our team will be relying on its younger talent to step up and work with the returners to build a team that exemplifies commitment, hard work, leadership, and resilience,” Khuon said. “We look forward to the challenge and work towards advancing to the playoffs.”

Outlook: The Cougars return five starters from a squad that advanced to the Class 4A state semifinals.

“We have a team with a ton of potential,” Johnson said. “Our expectation is to realize that potential, and improve upon it.”

Outlook: The Dragons return six starters from a team that advanced to the Class 3A state semifinals.

“We are excited by the group of players we have this season,” Tum said. “The Dragons will be led by a senior class that is hungry for success. The disappointment of losing in the state tournament two years in a row is a motivation enough for this group of players.

“Our aim is to be consistent in our performances and execute at a high level so that we can be competitive in tournaments, league and roar in the playoffs.”

Outlook: Cosgrove takes over a team that is lacking in varsity experience with only two lettermen back.

The Jaguars are hoping to improve as the season progresses.

“We hope to develop a young team and look forward for the opportunity to compete in 4A,” Cosgrove said.

Outlook: Topinio takes over a team that brings back four starters after finishing seventh in the Sunset League last year.

The Trailblazers have nine seniors on their roster.

“We have a core group of boys back from last year,” Miranda said. “The new boys are excited to step up and contribute. The expectations are high after the success we had last year, but we are taking things one step at a time, focusing on getting better mentally and physically.”

Outlook: Carpenter takes over a team that returns five starters from last season.

“With our core group of seniors infused with promising young talent, Gator men’s volleyball is committed to excellence and poised to have a stellar season,” Carpenter said.

Outlook: Hagan takes over a team that advanced to the Sunrise Region semifinals last year and brings back four starters.

“The program is working hard to continue the proud traditions established under coaches Sue Thurman and Justin Graham,” Hagan said. “The Wildcats will rely upon the leadership of a hungry senior class. With a very experienced team (11 returners, 11 seniors), we expect a very good season.

“The new region alignment will make it very difficult but returning our setter, our top two defensive specialists and two of our top three hitters from last season, it should make for a great season.”

“Jaelin Gray should be one of the top five players in the state and will be one of the most important players for us this year,” Hagan said. “With Coach Graham stepping down, there will surely be a dropoff in coaching, but the talent is there for a run at state.”

Outlook: The Patriots bring back the bulk of last year’s team that finished fourth in the Class 4A Sunrise League.

“I’m looking forward to the season ahead,” Agatonu said. “With 10 returning players hopefully we can improve on our 15-15 record from last year.”

Returning lettermen (starters): One (one)

Outlook: The Rattlers have finished as the state champion or runner-up each of their six years in Class 3A.

It will take some work to keep that streak alive this year as Blanchard-Davis, the league MVP last year, is the only returnee.

“Mojave will be looking to rebuilding after last season,” Engel said. “Mojave will build its team around outside hitter T.J. Blanchard-Davis, a two-year starter. T.J. will be taking on the leadership role this season, and I look forward to seeing how his game has improved from last year.

“We will be looking for Sebastian James and Taveon Alexander to add balance to our offensive and help our overall defense. Juniors Juan Carbajal and Shannon Paul will be counted on to improve from last year in order for us to be a championship team.

Sloan, a Pepperdine commit, who helped the U.S. Youth National team to a silver medal in the NORCECA U-19 Championships in Costa Rica last June, also is back and provides a big boost.

“It’s one of the more experienced groups that we’ve had after graduating just a couple of seniors,” Clarke said. “It’s a hard-working group of guys that want to improve on last year’s finish, and be playing as late into May as possible.”

Outlook: Vossen takes over a team that returns three starters and hopes to contend in the Mountain League.

“Even though we are an older team, we only have three players with substantial varsity court time,” Vossen said. “We are going to rely heavily on our outside hitters, Adlai Rodriguez and Sergio Delgado-Cardona, to guide our offense. Defensively we are going to look to Omar Abushanab to be our leader.

“We are hoping to be a competitive opponent for every team in the Mountain League.”

Outlook: The Mustangs had plenty of success last season, but bring back only two starters.

Wilson is hoping for another big year.

Outlook: The Mountain Lions bring back nine lettermen, including four starters, from a team that finished in the top half of the Class 4A Sunset League.

“Vista will be returning with quite a bit of experience this year,” McComas said. “The team is close-knit and hard-working. “The Lions are focusing on winning more first touches, decision making, and increasing the sheer physicality of their game.”

Outlook: Aquino (649 assists, 235 digs) and Francis (235 kills, 230 digs) return to guide a team that should also get a spark from Borla, who is back after missing much of last season with an injury.

“We have a good combination of senior leadership and young talent,” Drum said. “We hope to get good enough by the end of the season to make a strong playoff push.”

Outlook: Nothing may top winning a state title in the program’s inaugural season last year, but the Eagles are aiming for big things again this year.

“This year should be a good year for Sky Pointe,” Kristi Driscoll said. “Our serve receive should be strong with hopes for the execution by our front row.”

Outlook: Agustin hopes to continue a building process in his second year as head coach.

“Our program expectations are to more consistent with our fundamentals, execution and be more competitive overall,” Agustin said.

Outlook: The Miners bring back two starters from a team that finished seventh in the Class 3A Southern League.

“We want to improve from previous years,” Teague said.

Outlook: The Roadrunners return three starters as they shift back into Class 4A.

“I am looking forward to this season,” Solis said. “I know the competition will be tougher, but I have faith in these kids to do an excellent job.”

Outlook: The Vikings make the move to Class 3A with almost an entirely new squad.

“We are in rebuilding mode with only two returning players and no starters returning,” Porter said. “We begin our first season in 3A and hope to be a competitive team by the end of the season.”