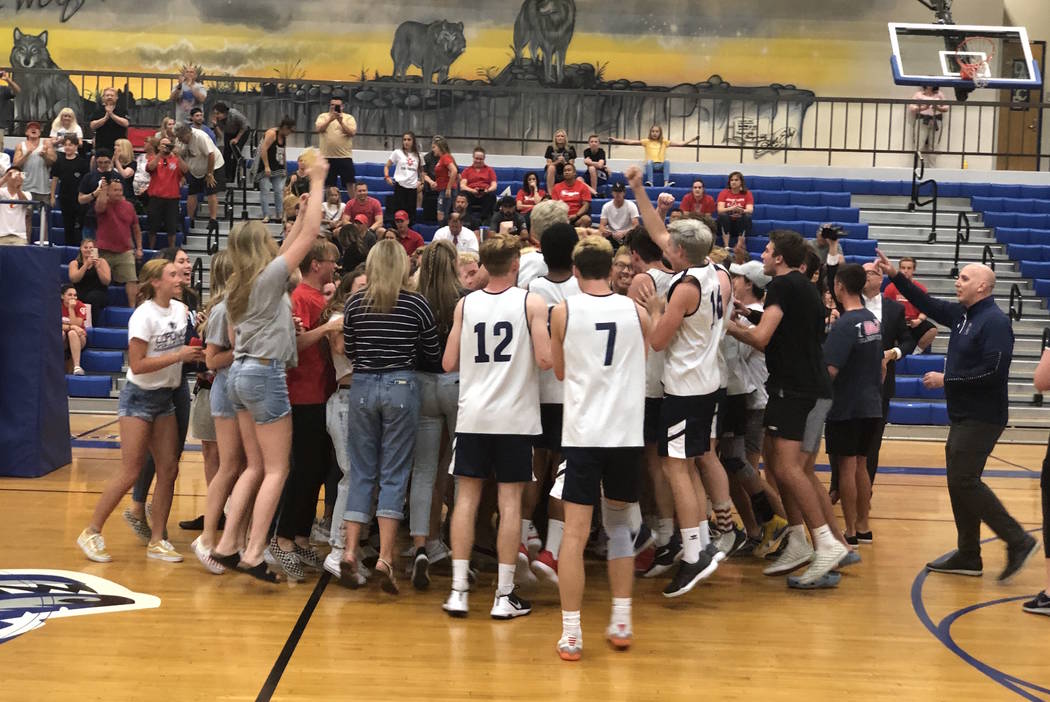 Coronado players celebrate with their fans after the Cougars defeated Arbor View, 19-25, 25-20, 25-20, 25-22 in the Class 4A boys volleyball state semifinals at Basic High School on Tuesday, May 14, 2019. Sam Gordon/Las Vegas Review-Journal

Setter Alex White knew Coronado’s boys volleyball team would be “good” ahead of his senior season. He didn’t know the Cougars would go undefeated in league play. Or win the Desert Region tournament.

Or advance to the Class 4A state championship.

“I didn’t think we were going to be able to take it (this far),” White said. “It was super intense in the first set … We had to bounce back and fight harder than ever to win. It’s just grit. That’s all it is. Just grit.”

Coronado was indeed sloppy in the opening set, and made several unforced errors amid brilliant play by Arbor View. Cougars coach Matt Johnson said his players were “too jacked” at the beginning of the match. But they settled in for the second set en route to a clinical victory.

The Cougars stormed out to a 20-14 advantage in the final set. But Arbor View, chock full of seniors, pulled within two points before Ceci ended the match with a kill.

“We came here tonight to let everybody know that we belong here,” Johnson said. “We play in just as strong a league as everybody else. We were the No. 1 seed on our side, but we played like underdogs. We played like we had something to prove tonight.”

He has the Panthers’ boys volleyball team one win away from a state championship in the spring.

“It’s really kind of one big program,” Clarke said of the school’s recent success. “The guys help out the girls, the girls come out to (help the boys). It kind of goes both ways. They have each other’s support. They’re definitely each other’s biggest fans. It makes it awesome.”

Clarke has established a winning culture within both programs and said a state championship was atop a list of goals to start the season. They welcomed back Pepperdine signee Scott Solan, who sat out last season, and haven’t lost to a local team this season.

Jace Roquemore, Brock Weaver and Caleb Stearman each had five kills for the Falcons (25-16).

“We have high goals and high expectations,” Clarke said. “We’re not done yet. Can’t win if you don’t get there.”