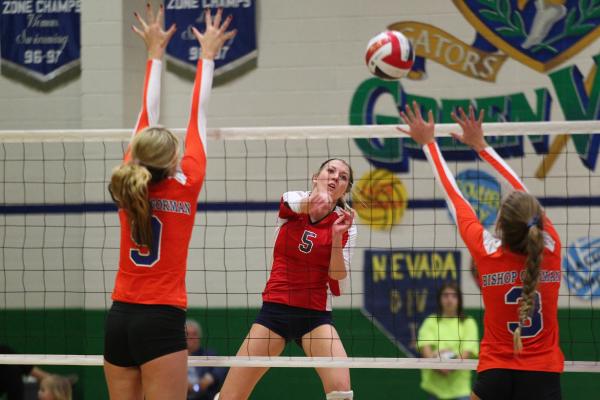 Coronado’s Taylor Jackson (5) attacks Bishop Gorman during the semifinals of the Division I girls state volleyball tournament on Friday. 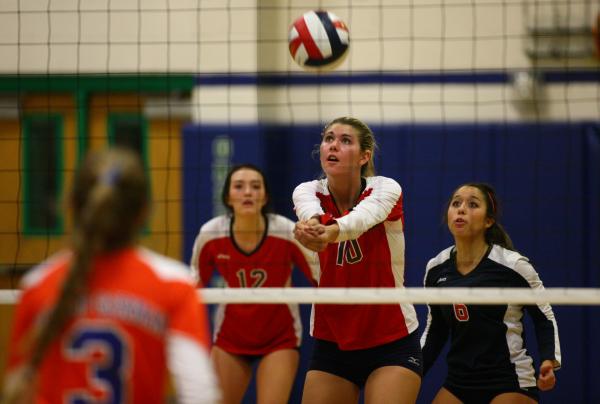 Coronado’s Berkeley Oblad (10) receives the ball during the Division I state semifinals on Friday. 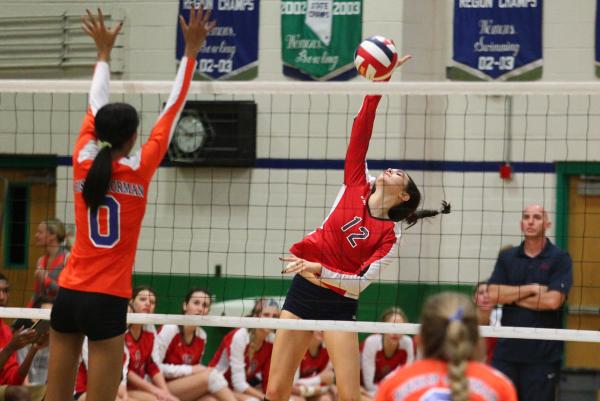 Coronado’s Brooke Garlick (12) tries to hit around the block of Bishop Gorman’s Vashti Cunningham (0) during the semifinals of the Division I girls state volleyball tournament on Friday. 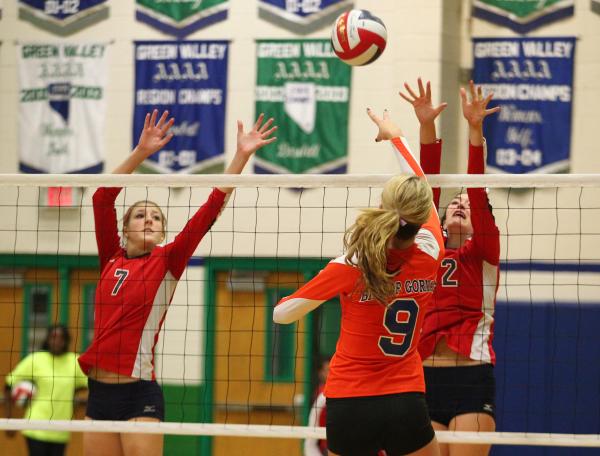 Bishop Gorman’s Emma Kirst (9) attacks as Coronado’s Nikki Jackson (7) and Kelli Wightman (2) reach to defend during the semifinals of the Division I girls state volleyball tournament on Friday. 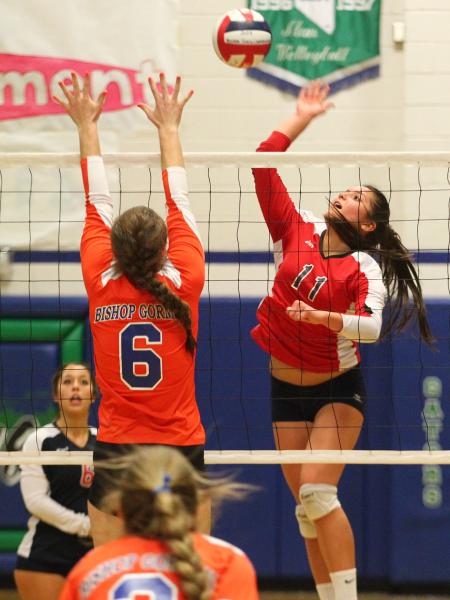 Coronado’s Carolyn Andrulis (11) attacks Bishop Gorman during the semifinals of the Division I state volleyball tournament on Friday. 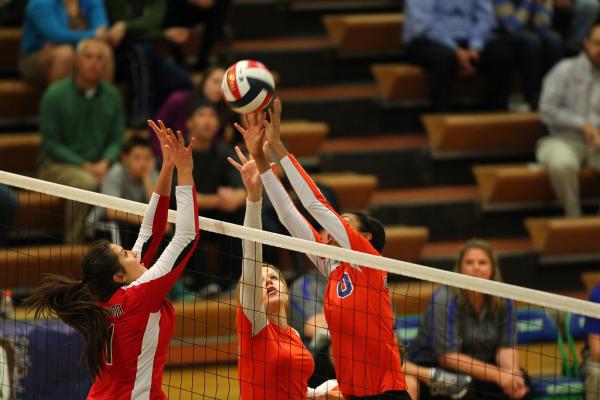 Bishop Gorman’s Vashti Cunningham (0) defends an attack from Coronado’s Carolyn Andrulis (11) during the semifinals of the Division I girls state volleyball tournament on Friday.

Just about, but not quite.

The win lifted the Cougars into Saturday’s championship match, where they will play Palo Verde at 4 p.m.

Brooke Garlick had 16 kills for Coronado, which was three points from elimination in the fourth set.

Cougars coach Matt Johnson said it was among the most impressive rallies he has ever witnessed.

“It’s the best one I can remember,” he said. “That’s the first time we’ve played five games all year so that was definitely an experience for us.”

Despite the close scores throughout the match, the Cougars made it surprisingly easy in the fifth set by jumping to a 7-1 lead. But momentum was on their side, and it showed itself when Carolyn Andrulis’ big hit caromed off a defender’s hand, bounced off her head and landed on the other side of the net for a point that put Coronado ahead, 9-3.

“Just before that, I told (Andrulis) to just swing away and see what happens,” Johnson said. “She made me look like a genius.”

The Cougars withstood Gorman’s late rally and fans stormed the court after Nikki Jackson put the match away with a final kill.

The Gaels appeared dominant in the first set, leading throughout. They were forced to hold off a late 6-0 Coronado scoring spurt in the second set, but exited with a 2-0 match lead.

“After that second game, we just kept our heads up,” Johnson said. “We knew we had to stick together, and if we didn’t hang our heads we could pull out of that hole. After that game, I told the girls we had them right where we wanted them.”

Coronado committed numerous errors midway through the third set, allowing Gorman to erase an early deficit to tie the score at 13. But several Cougars had timely kills down the stretch, and Brooke Garlick’s last kill of the set sent the match into a fourth set.

With a 23-22 lead, the Gaels had Coronado on the ropes in the fourth set. But Cali Thompson tipped one over the net to tie it at 23, Jackson had a service ace, and Garlick had a big kill to even the match, 2-2.

The Cougars carried that momentum into the final set, and never faced another serious threat.

“Momentum is always really important in the fifth set,” Johnson said. “To jump out and get a lead like that was huge.”

Francesca Manz led the Gaels with 20 kills and two aces, and teammate Gianna Ruggeroli had 16 kills.

After Palo verde cruised to an easy first-set win, Bishop Manogue began stealing momentum late in the second. The Panthers barely hung on, however, and took a 2-0 lead into the third set.

The Miners used a 13-4 run to win the first set, but Palo Verde recovered and used an 8-3 scoring spurt late in the fourth set to take control.

“We brought it together in that fourth game,” said Palo Verde coach Greg Siqueiros. “We played with more intensity and confidence, and that made the difference.”