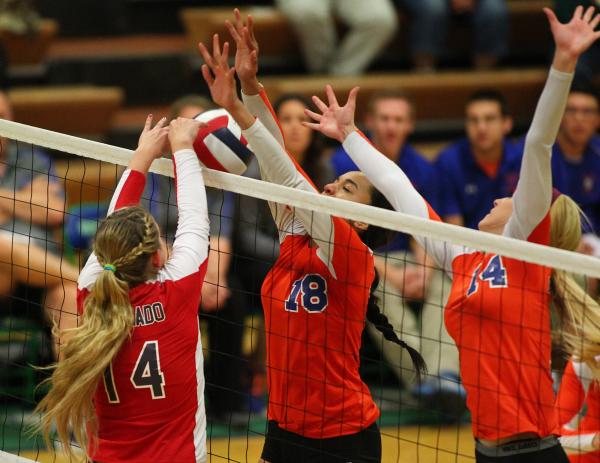 Coronado’s Cali Thompson (14) tips the ball over the net against Bishop Gorman during the semifinals of the Division I state tournament. Thompson was named the Southeast League’s Most Valuable Player.

Coronado girls volleyball coach Matt Johnson said there were times early this season when Cali Thompson’s competitiveness got the best of her.

By the time the playoffs came around, though, Thompson was one of the Cougars’ most selfless players.

Thompson, a 5-foot-10-inch sophomore setter, was named the Sunrise Region Player of the Year by the Southern Nevada Volleyball Coaches Association after helping Coronado to its first Division I state title.

“She’s a super competitive kid. She wants that leadership role, and she wants the ball in her hands, which is what you want as a coach,” Johnson said. “As the season went on, she began to understand how her success is not just what she does but how she makes other people around her better.”

Thompson, the Southeast League Most Valuable Player, had 38 assists, four aces, four blocks and three digs in a 3-0 sweep of Green Valley in the Sunrise Region final. She had 51 assists, 11 digs and six aces in a five-set, come-from-behind win over Bishop Gorman in a state semifinal.

“She’s definitely one of the best setters in the city, if not the state,” said Johnson, the Sunrise Region Coach of the Year. “She wasn’t one of our team captains, but she was an unofficial captain with the way she led our team out on the floor.”

The Cougars (31-6) featured a balanced offense, with five hitters capable of posting double-digit kills in any match. But Johnson said his team’s attack wouldn’t have been as effective without Thompson’s development and unselfish play.

“She is able to get the ball to the right people at the right time, and she has an understanding of who has the hot hand,” Johnson said. “She grew as a player understanding the nuances of being a setter.”

Foothill’s Krysta Ortiz was named Coach of the Year in the Southeast League.

Findlay Prep, which is 7-0 this season and features UNLV class of 2014 target Rashad Vaughn and Kansas signee Kelly Oubre, is ranked No. 2 behind Montverde Academy (Fla.), the reigning mythical national champion. Bishop Gorman, led by UNLV class of 2015 targets Stephen Zimmerman and Chase Jeter along with senior point guard Noah Robotham, is No. 9.

Desert Pines, the defending Division I-A state champion, is No. 18 in the West Region rankings.