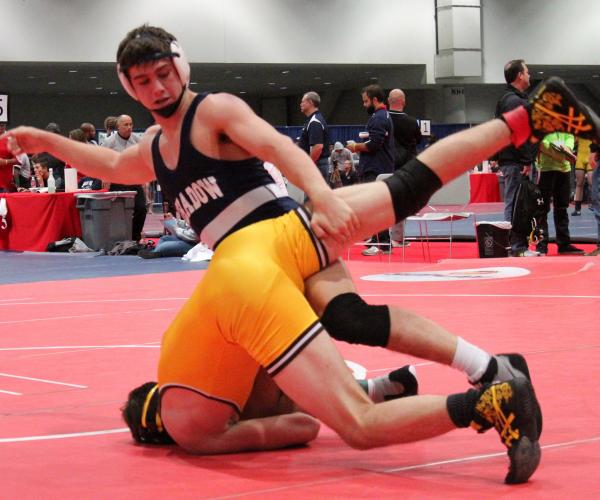 Shadow Ridge’s John Scarpati works Bonanza’s Jesus Hinojos in the second round of their match, just before scoring a pin, in the Las Vegas Holiday Classic on Friday 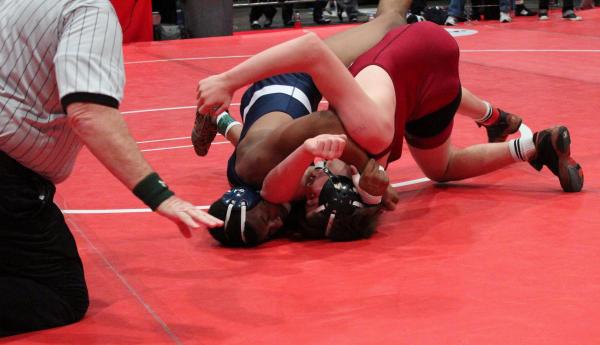 Shadow Ridge’s Elvin Cruz made an aggressive move and went for a pin, just before Mesa, Bryan Zobeck of Red Mountain (Ariz.) turned the tables and won by fall on Friday in the Las Vegas Holiday Classic.

Shadow Ridge coach Gus Gledhill insists it’s the best the school’s ever had.

Both are hoping the Mustangs can win their third Northwest League title in five years and avenge what Gledhill described as a bust in the 2013 state tournament.

“Last year’s team, we weren’t very good,” Gledhill said. “The team, we thought, would take fifth or sixth in the region and they totally shocked us (taking second at regionals). That was the best they wrestled all year. We end up qualifying eight to state; then we went up to Reno and just choked.

“But through all this past summer’s workouts these guys became a lot closer.”

Gledhill said his offseason program used to consist of about six to eight kids practicing three days a week. This past summer, he told his Mustang wrestlers they’d need to participate more in the offseason if they wanted to attend the Disney Duals in Florida from Dec. 26-31.

To travel to the Happiest Place on Earth, wrestlers were subjected to the most intense offseason schedule in Shadow Ridge history.

“We averaged between 25 and 30 kids in the room every practice,” Gledhill said. “Even going to tournaments, we were taking full teams, which we never did before. We really focused on weight training and the conditioning aspect of it, and I think they bought in. We’re winning a lot of matches this year.”

Going into this weekend’s Las Vegas Holiday Classic at the Las Vegas Convention Center, the Mustangs boasted a 22-3 overall mark in team duals, and were led by several returning state qualifiers like Scarpati, who was 3-0 with three pins Friday.

“Our goal, as a team — take it all,” said Scarpati, who’s now 26-1 with 15 pins headed into Saturday’s quarterfinals of the Holiday Classic. “Of all three years I’ve been here, this team now has been the closest, as a family.”

“That’s my biggest motivation coming into this year, was last year’s (loss) at state,” Scarpati said. “I still have that humbling me, how I go from winning regionals to going 0-2 at state.”

Other key upperclassmen for the Mustangs include seniors Juztis Yamane (106 pounds), Jonah McKee (138 pounds) and Elvin Cruz (182 pounds). All three took third place in the region tournament last year, but each went 0-2 at state.

Gledhill and Scarpati admit the team is young, but both are confident last year’s shortcoming and the offseason bonding will benefit the Mustangs in the end.

“We’ve had pretty good matches (so far), I’d say we just want to take it all,” Scarpati said. “If we get our technique up, our conditioning up, we can take it all.”

Said Gledhill: “They got a taste of what state’s like, and that every match is a tough match. I think this is the best team that we’ve had – ever.”

QUALITY OVER QUANTITY — Tournament director Larry Barnson conceded the Holiday Classic is down from 77 teams in 2012 to this year’s field of 66 teams — which registered a total of 698 wrestlers. But the longtime veteran of the sport also said the competition is far superior this year.

“We have fewer teams for various reasons — whether it was finances or disciplinary issues — but I think the quality is much better this year,” said Barnson, who coached at Chaparral for 21 years, before opening Silverado as the school’s athletic director. “And until we get down to the final evening, this is a great opportunity for local wrestlers to see some of the best out-of-state wrestlers.”

That would include a pair of powerhouse teams from Oklahoma — Lawton’s MacArthur High and Tulsa Union — Red Mountain from Mesa, Ariz., and several respected California programs, including Victor Valley, Irvine and Rancho Bernardo.

The highest local team was Foothill, which is in 10th place with 89 points. Shadow Ridge is the next local team in 12th with 85 points. Defending state-champion Green Valley is 22nd with 64 points.

HARD-LUCK WRESTLING — While the double-elimination event sends wrestlers to the stands as spectators for the championship and consolation brackets once they’ve lost two matches, Barnson added a Hard Luck Tournament for all the wrestlers who went 0-2 or 1-2 on Friday.

Those wrestlers are re-bracketed for Saturday and are placed into exhibition matches at the back of the exhibit hall, so they can get benefit from additional mat time. Barnson said out-of-state coaches don’t have to worry about their wrestlers with idle time, while their teammates are still competing.

“Otherwise these kids are sitting out and doing nothing,” Barnson said. “The coaches who keep coming back every year, they love it.”

COMING OF AGE — Boulder City High School’s wrestling program has always earned respect in its classification, and beyond. Though the Eagles are Division I-A, they are never afraid to compete with the big boys.

Boulder City, which is currently tied with Pahrump in 27th place with 54.5 points, is 9-1 overall this season. The Eagles are slowly getting into shape after 10 of their regulars played football or soccer in the fall.

“This is the tourney we’re looking for them to turn the corner,” assistant head coach Kevin Ruth said. “We wouldn’t change it for anything. We support multi-sport athletes.”

Ruth, along with head coach Jim Cox, qualified 17 wrestlers to the state tournament (10 seniors) last year. This season is the first time in Ruth’s 17 years with the program the Eagles have no returning wrestlers who placed at state.