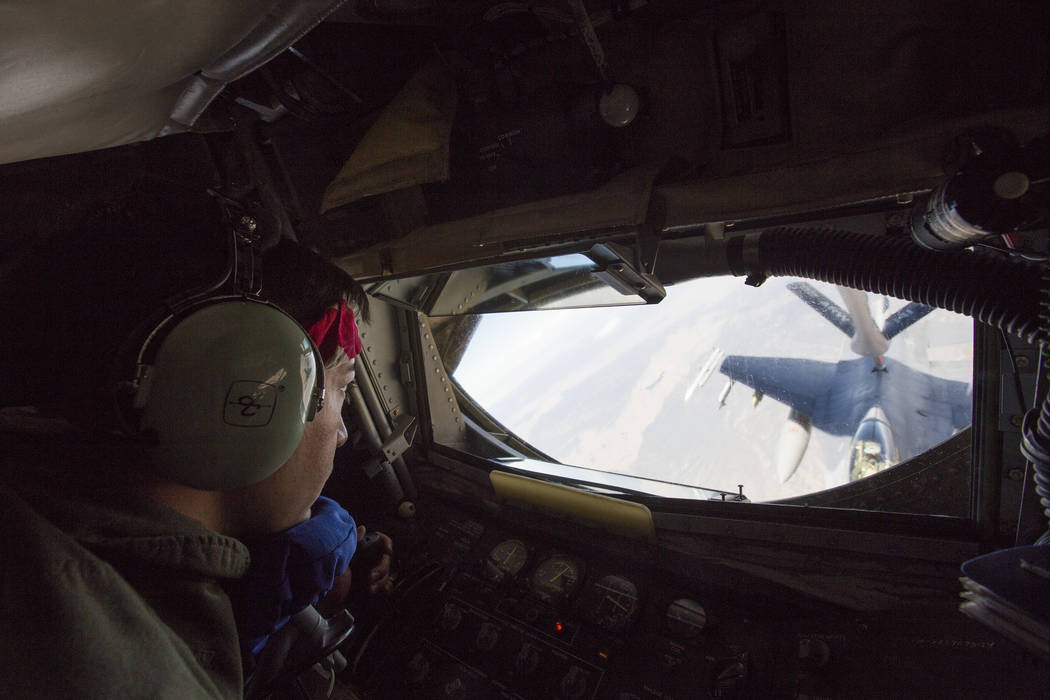 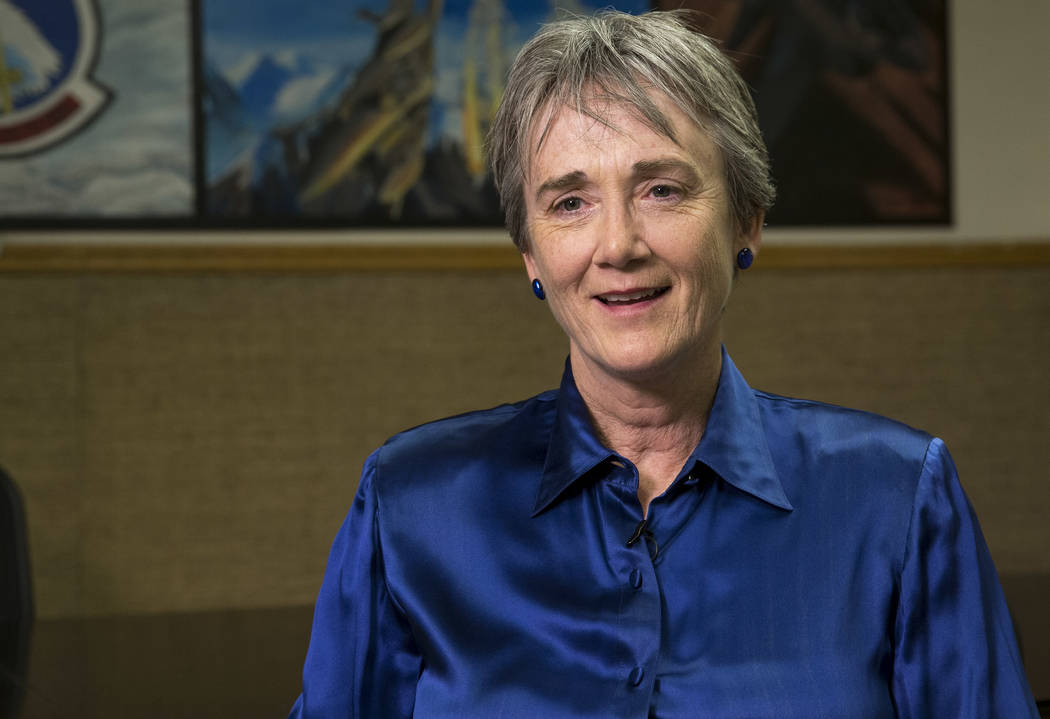 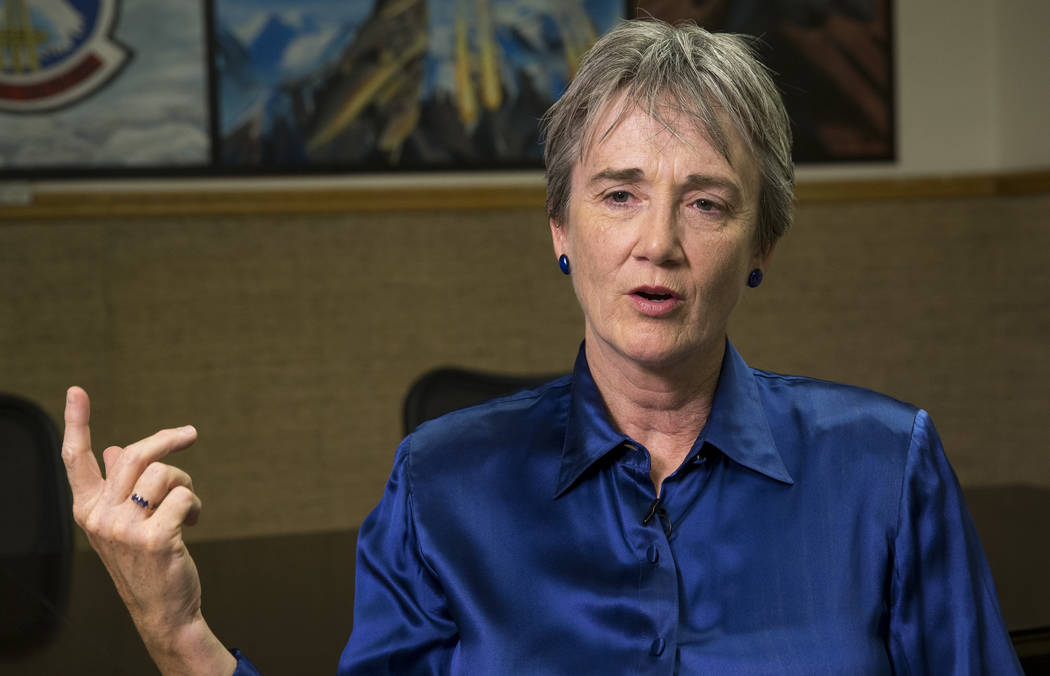 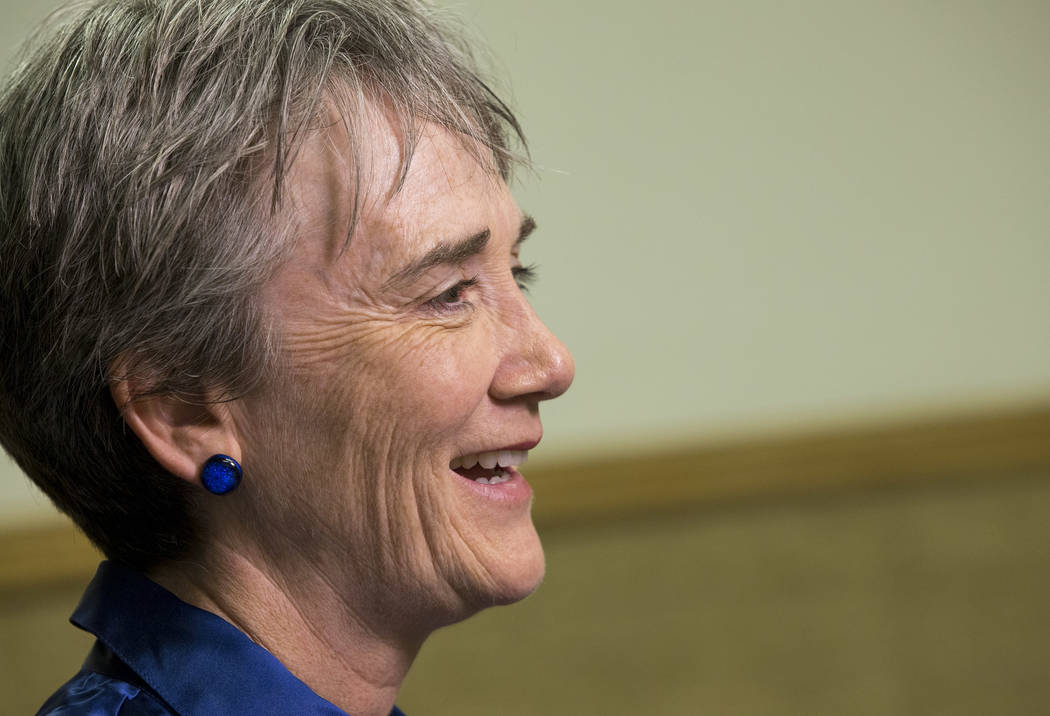 Air Force Secretary Heather Wilson sees a need to protect the space frontier and envisions bolstering the ranks of drone warfare all while preserving the vast Southern Nevada range that shrinks as fighter jets zip faster across it.

What she doesn’t see in her crystal ball is a nuclear-waste train rolling across the 2.9-million-acre Nevada Test and Training Range to reach the Department of Energy’s planned repository at Yucca Mountain, 100 miles northwest of Las Vegas.

“If Yucca Mountain becomes a storage area it needs to operate without impacting the ability of the country to defend itself,” Wilson said Friday in an exclusive interview with the Las Vegas Review-Journal. “There is no route across the range that would not impact testing and training.”

Even a rail corridor that closely parallels the range’s boundary in Nye County could raise encroachment issues, she said, comparing what Nellis Air Force Base has dealt with balancing jet noise complaints and national security as urban Las Vegas sprawled closer to it over the decades.

“We do night operations. We train people to go to war,” she said after wrapping up her first visit as secretary of the Air Force to the Nellis and Creech bases.

If the Trump administration follows through with its blueprint to restart the Yucca Mountain Project that was dormant and funding-starved during the Obama administration, she will stay the course previously posed by the Air Force.

“I don’t think my concerns are any different than what has already been expressed by my predecessors. … We still have a very high need to be able to use the Nellis training area for both training and tests,” she said.

In 2003, Air Force Secretary James Roche and Chief of Staff Gen. John P. Jumper wrote the House Armed Services Committee objecting to the Energy Department’s proposed Chalk Mountain route across the range. They said it would impact “mission-critical systems evaluations” as well as air combat training. They noted that 75 percent of all Air Force live munitions stateside are employed there.

The range’s role in testing of how new generation aircraft perform and can be detected or not by radar is also vital to the readiness.

Roche and Jumper also expressed concern for the fringe of the range citing “any modified routes into portions of the NTTR (Nevada Test and Training Range). Additionally, any overflight restrictions on aircraft operating in NTTR-associated airspace will negatively impact our readiness activities.”

The Chalk Mountain route, a short-cut option for rail shipments of spent nuclear fuel assemblies from the Midwest and eastern U.S., was later downgraded to “nonpreferred” by the Energy Department but is still part of the routes evaluated for the license application submitted to the Nuclear Regulatory Commission in 2008.

Wilson’s four-day trip included a helicopter journey through part of the 12,000 square miles of restricted air space — the largest contiguous air-and-ground space for military training in the free world.

Despite its size, the Air Force wants to expand it because it has shrunk relative to its purpose as military jets have gotten faster and faster. The F-22 Raptor supercruiser, for example, can zip across it in seven minutes, flying at roughly 17 miles per minute.

Wilson, a 56-year-old U.S. Air Force Academy graduate, Rhodes scholar and former Republican Congress member from New Mexico, spoke on a wide range of topics from Yucca Mountain to performance of new Block-5 remotely piloted Reapers at Creech Air Force Base to issues with F-35 joint strike fighter jets to her call for a larger cadre of airmen devoted to protection and use of space and cyberspace.

She oversees 660,000 active-duty, National Guard and reserve airmen and a budget of $132 billion.

On the space frontier

In June, she wrote that “the Air Force and the nation are at a critical crossroads” when it comes to “getting space operations right.”

While calling for a 20 percent space funding increase, she told a House Armed Services subcommittee along with Air Force Chief of Staff Gen. David Goldfein that a new “space corps” service branch is not warranted because it would only create another layer of bureaucracy and “the Pentagon is complicated enough.”

On Friday, she said the Air Force is “the institution in the federal government that has taken the threat to space more seriously.”

The Air Force has dominated space not just for war fighters but also for “individuals, business and industry” who depend on the global positioning satellite system operated by a squadron of airmen in Colorado Springs, Colorado, who “run GPS for a billion people every day.”

“The space domain until recent years was always considered benign. We had the high ground, you could look from there, communicate there, navigate from there,” she said. “It’s no longer benign and our adversaries know we are more dependent upon space than they are and they are preparing capabilities to deny us access to space and deny us use of space.

“We have to prepare for that,” she said.

She wouldn’t elaborate what methods are being explored to protect space assets but said the Air Force stood up “an experiment” in the last 18 months that’s now the National Space Defense Center in Colorado.

“We have come up with a common operating picture to see what’s going on in space instead of just kind of cataloging things,” she said. “If somebody moves, we need to know why, what they’re getting close to and then have the ability to do something about it. “

Wilson said development of techniques and strategies to protect space assets is “a very high priority.”

She said infrared sensors operated by the Air Force from space are used to detect North Korea missile tests “and we calculate not only that there has been a launch, but where that launch is headed, how fast it’s going, what angle it’s going at and within minutes we communicate that information to people on the ground so they can make decisions. That’s pretty amazing.”

Since 80 percent of U.S. space operations are conducted by the Air Force, she also serves as principal adviser to Secretary of Defense Jim Mattis for the military space endeavors that include special Navy systems and a few from the Army. Even timing signals for automated teller machines and the New York Stock Exchange come from Air Force space operations, she noted.

Wilson said the F-35 joint strike fighter jets “are ready for combat. If we went to war tonight the F-35s would go.”

Meanwhile, pilots continue to develop capabilities for the pricey stealth fighter jet in Red Flag air combat exercises while engineers and scientists troubleshoot a problem that surfaced last month with oxygen systems in some F-35s at Luke Air Force Base in Arizona.

She said the problem is being probed at Wright-Patterson Air Force Base in Ohio with simulators and data from the affected aircraft. “We will fly those profiles and see if we can replicate the problem and then fix it.”

Wilson said a new “dwell time” goal under a “get well” policy has been welcomed by remotely piloted air crews who were stressed out by continuous missions in the war on terrorism, first from flying Predators armed with laser-guided missiles and now Reapers that can fire missiles and make precision air strikes with bombs.

“As we brought on these aircraft, the demand for them just went through the roof,” she said.

The “surge for the fight hurt our readiness” when ISIS became an adversary in 2014, she said. “We’ve been increasing numbers of people to get to a dwell time. It’s not perfect yet. It’s not the goal yet but it’s getting better. … I would say we’ve got a ways to go, but I was very pleased at what I saw at Creech and the commitment there.” 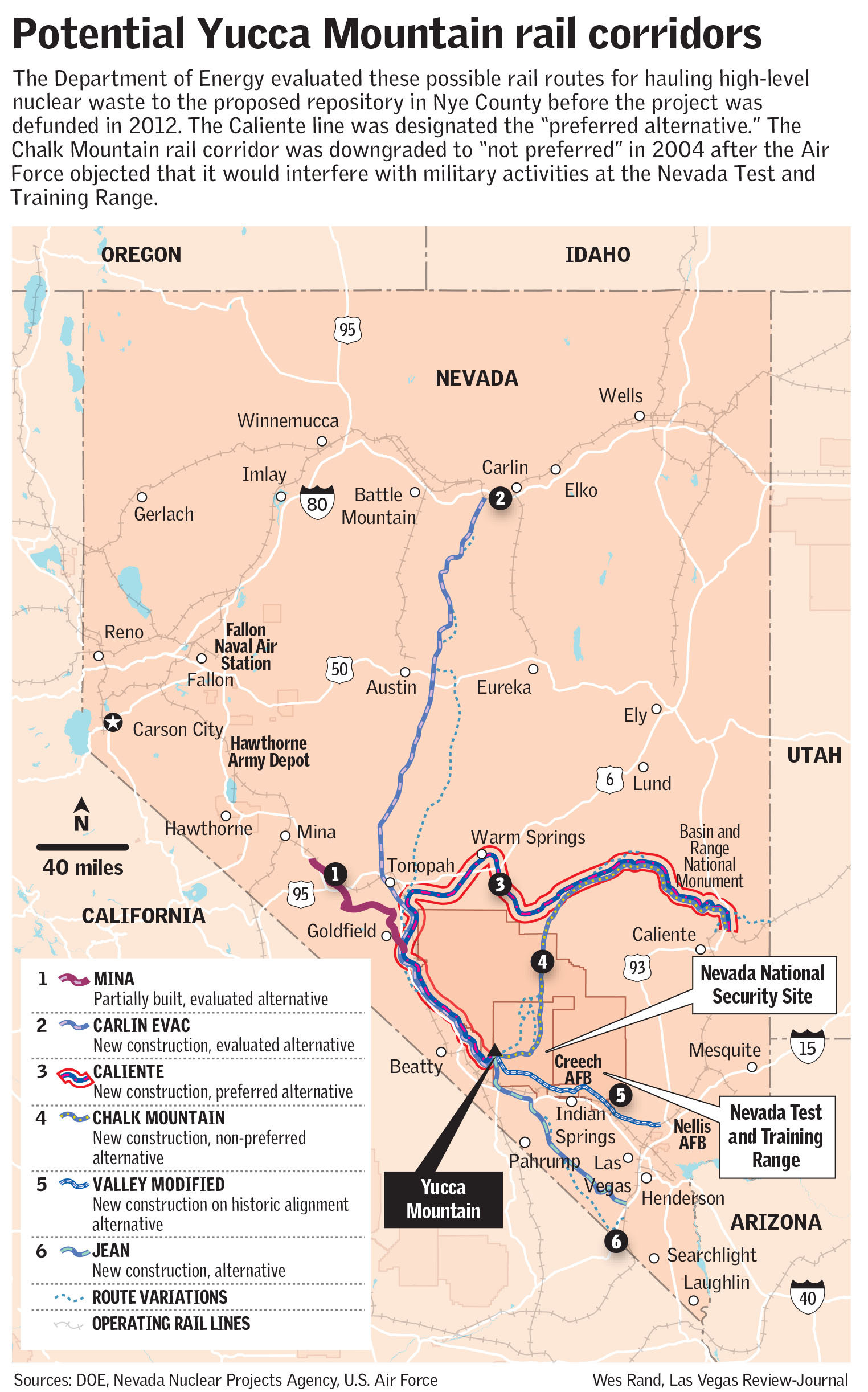