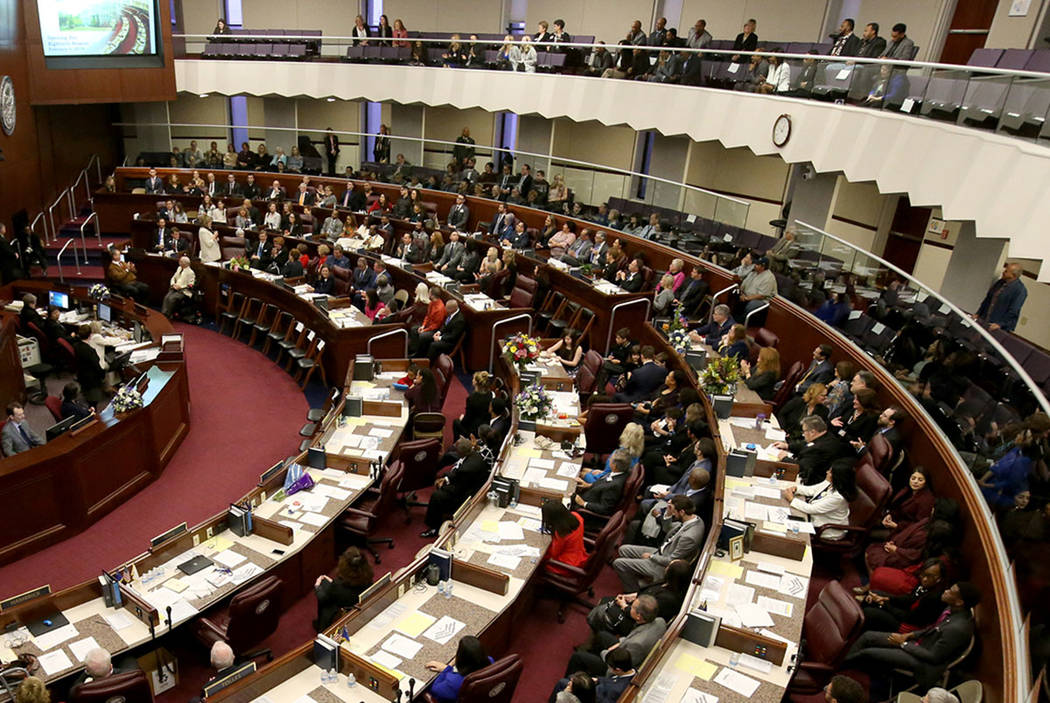 Lawmakers are seen in the Legislative Building in Carson City on the first day of the 80th session of the Nevada Legislature Monday, Feb. 4, 2019. (K.M. Cannon/Las Vegas Review-Journal)

CARSON CITY — Lawmakers took the executioner’s sword to bills that would have banned the death penalty in the state, let police issue tickets with automated red-light cameras, and more as a key deadline for bills came and went Friday night.

Friday marked the last day that bills could either be moved out of their first committee or get thrown onto the trash heap of dead bills. In 2017, more than 200 met a similar fate.

Here’s a a look at some of the notable bills that died Friday:

Assembly Bill 143 and Senate Bill 246 would have ended capital punishment in Nevada.

Assembly Bill 187 would have required bicyclists, scooter riders and skaters under 17 to wear a helmet.

Assembly Bill 118 would have capped interest on payday loans at 36 percent.

Assembly Bill 200, the “Textalyzer” bill, would have allowed officers to scan a driver’s mobile device for recent usage in the case of a crash.

Assembly Bill 213 would have allowed some under-16 charter school students to get restricted driver’s licenses to go to and from school.

Assembly Bill 470 would have raised the legal age to buy cigarettes from 18 to 21.

Senate Bill 229 would have barred hotels and motels from divulging to law enforcement details on the immigration status, citizenship or nationality of guests without a warrant.

Senate Bill 294 would have limited public disclosure of internal police reviews of critical events, such as officer-involved shootings.

Senate Bill 413 would have criminalized prostitution in Nevada.

Assembly Bill 74 would have required anyone who sold antler sheds from deer and elk in Nevada to get a license from the state.

Senate Bill 107 would have required elected officials to resign from their seats if they ran for a higher office in the middle of their term.

Senate Bill 249 would have required all public schools in Clark and Washoe counties to have libraries.

Assembly Bill 114 would have added a 10 percent tax at electric vehicle charging stations.

Senate Bill 369 would have prevented pharmacy benefit managers and manufacturers from increasing a prescription drug’s cost during a patient’s plan year.