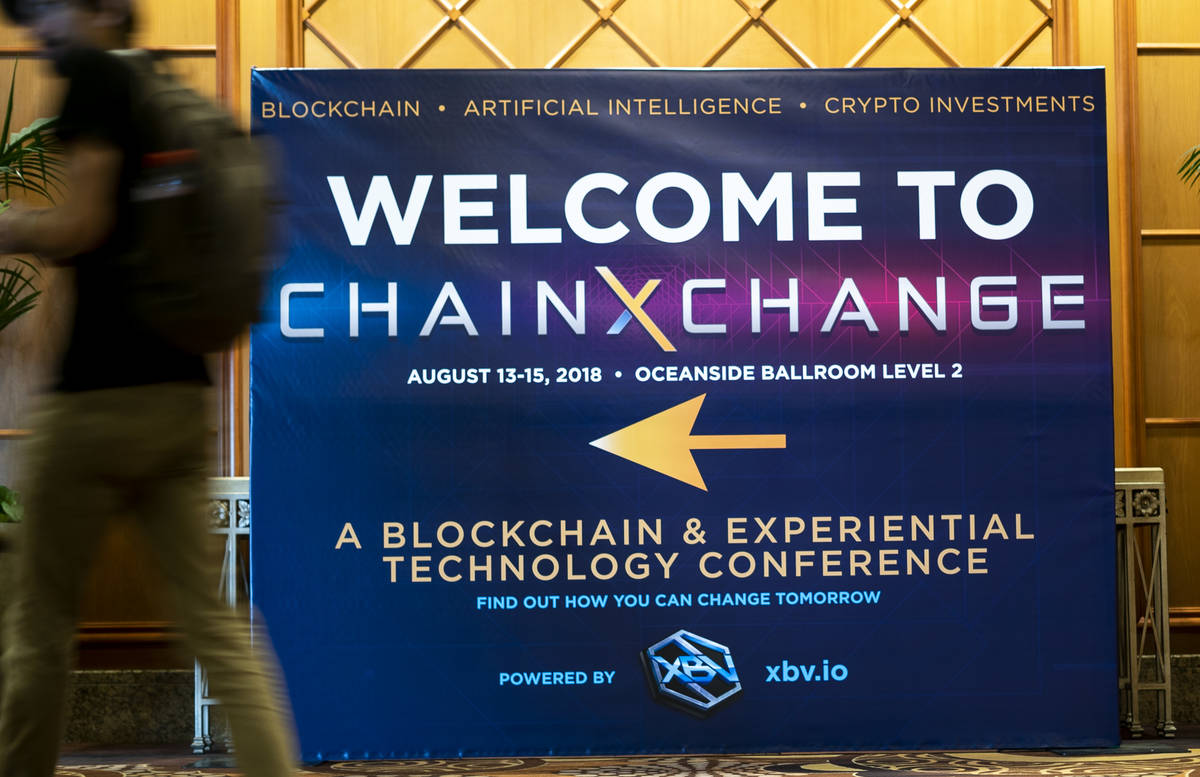 A ChainXChange sign photographed outside of the conference room at ChainXChange at Mandalay Bay Convention Center in Las Vegas, Tuesday, Aug. 14, 2018. ChainXChange is a blockchain and AI technology convention in Las Vegas. (Las Vegas Review-Journal/File) @MarcusVillagran

CARSON CITY — If you’ve got enough money, acres upon acres of undeveloped land and an “innovative technology,” you soon could form a new local government in Nevada.

When Gov. Steve Sisolak last month announced his plan to launch Innovation Zones in Nevada to jump-start the state’s economy by attracting new tech companies, the details of how those zones would operate proved scarce.

According to a draft of the proposed legislation, obtained by the Review-Journal but not yet introduced in the Legislature, Innovation Zones would allow tech companies like Blockchains, LLC to effectively form separate local governments in Nevada, governments that would carry the same authority as a county, including the ability to impose taxes, form school districts and justice courts and provide government services, to name a few duties.

Sisolak pitched the concept in his State of the State address as his plan to bring in new companies that are at the forefront of “groundbreaking technologies,” all without the use of tax abatements or other publicly funded incentive packages that had previously helped Nevada bring companies like Tesla to the state.

During his speech last month, Sisolak specifically named Blockchains, LLC as a company that had committed to developing a “smart city” in the area east of Reno that would run entirely on blockchain technology, once the legislation passes.

The draft, which could change before it’s unveiled as a formal bill, provides the first look into the details behind the concept.

The draft language of the proposal says that the traditional local government model is “inadequate alone to provide the flexibility and resources conducive to making the State a leader in attracting and retaining new forms and types of businesses and fostering economic development in emerging technologies and innovative industries.”

It adds that this “alternative form of local government” is needed to aid economic development within the state.

The Governor’s Office of Economic Development would handle the applications for the Innovation Zones. Those zones would be limited to specific “innovative technology,” which includes blockchain, autonomous technology, the internet of things, robotics, artificial intelligence, wireless technology, biometrics and renewable resource technology.

A spokeswoman for Sisolak’s office said in a statement Wednesday that the governor “looks forward to rolling out more information on Innovation Zones and other items from his State of the State speech in the future.”

“The Governor’s Office has not submitted a bill draft request related to this initiative so we will not be commenting on any language at this time,” the statement said.

GOED did not respond to questions about the zones Wednesday.

The zones would initially operate within the local county where they are located but would eventually be able to take over the duties of those counties and become an independent governmental body.

The zones would have a three-member board of supervisors that would carry the same powers as a board of county commissioners. And the company or firm applying for the zone would have significant say over who would sit on that board.

The draft proposal lays out the requirements for the zone, including the applicant owning 50,000 acres of undeveloped land, all within a single county but separate of any city, town or tax increment area. And the area would have to be uninhabited. The company would also need to have $250 million, and a plan to invest an additional $1 billion over 10 years into the zone.

The zone would be required to report to the Legislature during the biennial session to detail its capital investments, physical progress on developing infrastructure, an estimate of the number of people employed in the zone and the economic impact from the zone itself.

In 2018, Blockchains, LLC, the tech firm owned by lawyer and cryptocurrency millionaire Jeffrey Berns, purchased roughly 67,000 acres — about the same size as the city of Henderson — of undeveloped, uninhabited land in Storey County at the Tahoe Reno Industrial Center for $170 million.

Since then, the firm has given heavily to political candidates and PACs.

Blockchains, LLC gave $50,000 to a Home Means Nevada PAC, which managed Sisolak’s transition into office, in January 2019, according to campaign finance records. The company also donated $10,000 to Sisolak’s campaign in the 2018 election cycle. Sisolak’s opponent, Republican Adam Laxalt, also received $10,000 from the firm that year.

Berns himself gave $50,000 to the state Democratic Party in 2019, and various donations ranging between $1,000 and $5,000 to various state lawmakers from both parties.

Blockchains, LLC did not respond to requests for comment Wednesday.

Storey County Commissioner Lance Gilman, one of the industrial center’s developers, said that the Blockchains Innovation Zone is “going to have an impact on Storey County, and the jury is still out on whether that will be positive or negative.”

Gilman said that the county is staying open-minded about the idea, but there needs to be some sort of incentive to compensate for ceding the land to the zone itself.

“We’re going to want to know that Storey County gets the benefit of the bargain,” he said.

Gilman said that if that isn’t the case, and the negative consequences outweigh the positives for Storey County, then he doubts the legislation would move forward.

Senate Minority Leader James Settelmeyer, R-Minden, whose district includes Storey County, echoed Gilman’s thoughts when reached by phone Wednesday evening, saying that it could be “fantastic” for the state and especially Northern Nevada. But he said he’s concerned that it leaves Storey County high and dry.

“The legislation seems to be rather one-sided, that the Innovation Zones get to make determinations and the county has to go along with them,” Settelmeyer said.

Settelmeyer added that he was “not impressed” about finding out the details of a bill that would affect part of his district “so far into the process.”

“It is disrespectful,” he said.