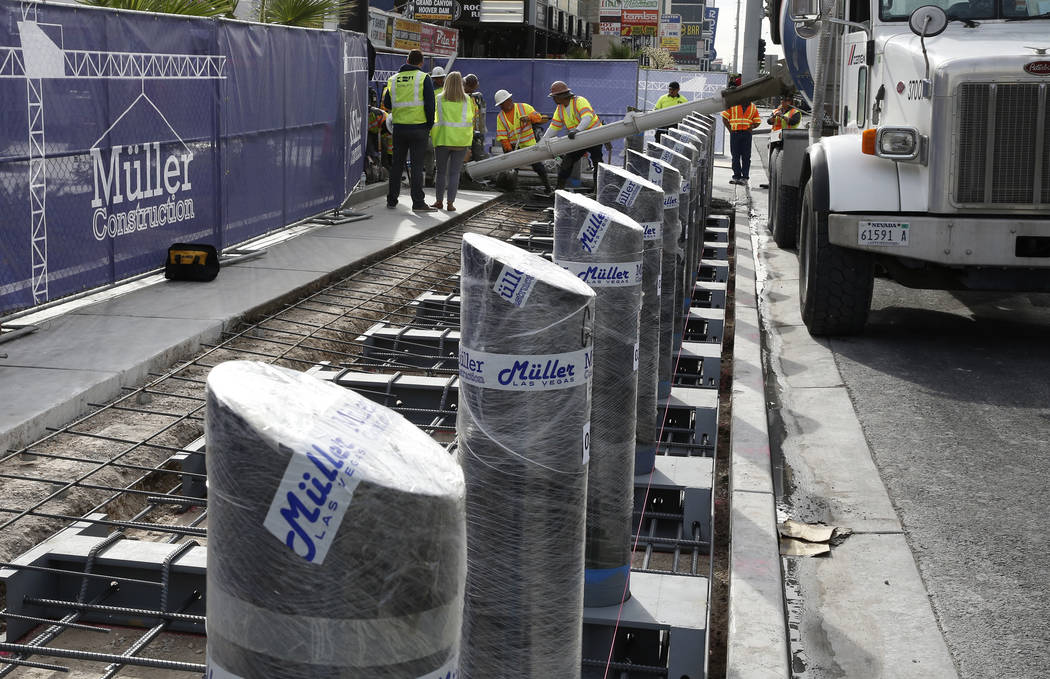 Clark County commissioners on Tuesday postponed approving the installation of more steel posts along Strip sidewalks because of a dispute over whether some workers have been fairly paid.

“They told me that for weeks they’ve been performing carpentry work, laborer’s work, ironworker’s work, finisher’s work, but they’ve been being paid the lesser of a rate,” DeSalvio said after the meeting.

The county is unable to continue working with the company until the pay dispute is resolved.

Mueller Construction Vice President of Marketing and Sales J.D. Calhoun said DeSalvio’s announcement at Tuesday’s meeting was the first he had heard of the complaint.

“If this an issue we will be addressing it with Clark County,” he said.

Local police would prefer there be no delay, but have no control over the situation, Metropolitan Police Department spokesman Larry Hadfield said.

“Although it would be optimal for these to be installed on time the LVMPD is not part of the construction of the bollards,” he said.

Commission Chairman Steve Sisolak said he hopes to get the dispute resolved within two weeks so workers can begin installing the next set of posts. Muller Construction installed 800 posts along the Strip late last year to improve pedestrian safety by preventing vehicles from traveling onto sidewalks.

“That’s just the beginning, the next 500,” Sisolak said after the meeting. “We’ve got thousands coming after that, and I want to make sure the company is doing the right thing by paying their workers at the appropriate rates.”

In Nevada, workers completing government contracts are guaranteed a prevailing wage — the minimum a worker completing a certain trade will be paid.

DeSalvio said during November and December the three workers were paid the prevailing wage corresponding with their titles as concrete finishers even though they were doing work outside of that trade.

“They basically got cheated who knows how many hundreds of dollars,” he said.

Laborers International Union Local 872 business manager and secretary-treasurer Tommy White, who attended the commission meeting, said it was important that workers receive the correct wage for their work.

“We don’t look at this as a union thing. We look at this as a worker issue,” he said after the meeting. “And when you have companies that come in from out of town and they open up a business here … we want to make sure that the residents are getting paid correctly.”

Commissioners were set to vote on whether to pay Muller Construction $2.5 million more to install 500 steel posts between Tropicana Avenue and Spring Mountain Road.