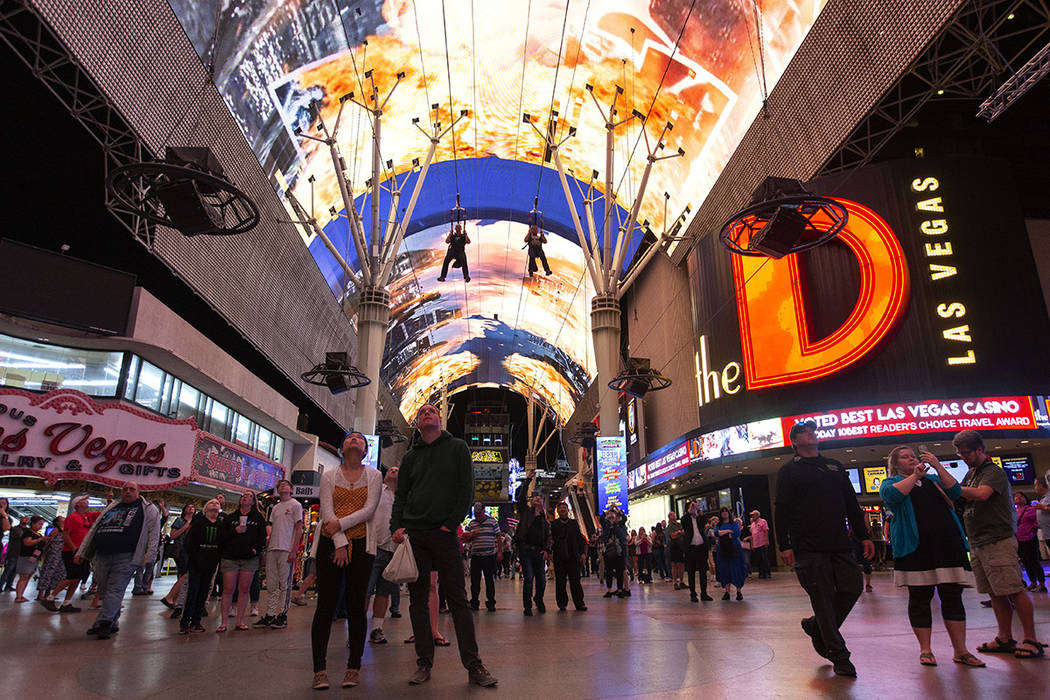 Displaying a firearm in downtown Las Vegas’ tourist-popular Fremont East district is now illegal — if the gun is fake.

The City Council on Wednesday unanimously passed a bill to ban toy and replica firearms in the city’s hallmark entertainment district and on the public sidewalks bordering the area.

In doing so, it becomes the latest valley jurisdiction to bar imitation guns in a state where it is legal to carry the real deal unconcealed.

“It’s just one of those weird, twisted ironies,” said Christiane Brown, co-president of the Northern Nevada chapter of the Brady Campaign to Prevent Gun Violence.

Local policymakers do not have regulatory authority over real firearms — an issue left to state lawmakers.

Don Turner, president of the Nevada Firearms Coalition, said the reason that local governments may even regulate fake guns is because an actual firearm is well-defined in state statute, and “that’s how they skirt the state pre-emption law.”

But Turner suggested regulation of imitation guns would be unnecessary if they were treated with care and not as flamboyantly or haphazardly as he said he saw with some street performers in Fremont East.

“It’s the irresponsible use I think that’s creating the problem,” he said, adding how there were also laws on the books to restrict behavior with authentic guns like brandishing or pointing. “If you treated a toy gun like a real gun, you wouldn’t have an issue.”

Councilwoman Olivia Diaz, a former assemblywoman who represents Fremont East, introduced the bill that passed Wednesday, but she was not available to speak after the council meeting. City spokesman Jace Radke said the bill was spurred by the city’s Public Safety Department, which sought to improve safety in the corridor by making the laws consistent with existing prohibitions on the Strip.

In October 2012, the Clark County Commission, which has authority over the Strip, unanimously passed a bill that outlawed display or use of any toy, imitation or replica firearm in county territories including the Strip.

The city of Henderson also outlaws pointing, brandishing, concealing, using or attempting to use a fake firearm, according to its municipal code.

Las Vegas’ new regulation expands beyond just fake firearms — as did the county’s ordinance seven years earlier — to ban display and use of actual weapons including swords, knives, bows and arrows and flame-emitting devices.

Violators can be charged with a misdemeanor punishable by up to six months in jail and a $1,000 fine, according to the bill’s language.

Brown, the gun violence prevention advocate, concluded that she would prefer city policymakers use their influence to lobby state lawmakers to act against Nevada’s open-carry laws, saying the new city bill could be a teaching moment on the difference between perceived and actual danger.

“I understand that if you have a toy and someone thinks that’s a real gun, that could cause grave concern,” she said. “However, people are out there with real guns legally, and I think that should be of grave concern.”