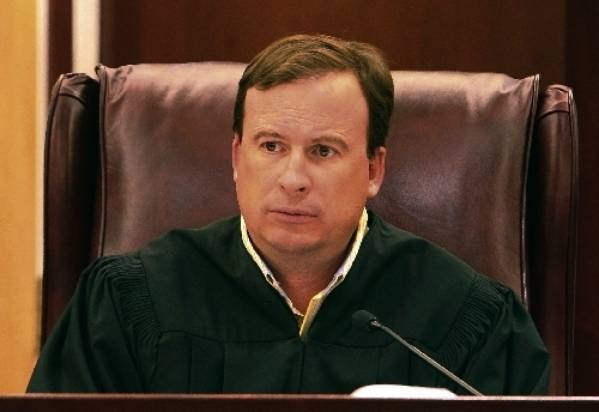 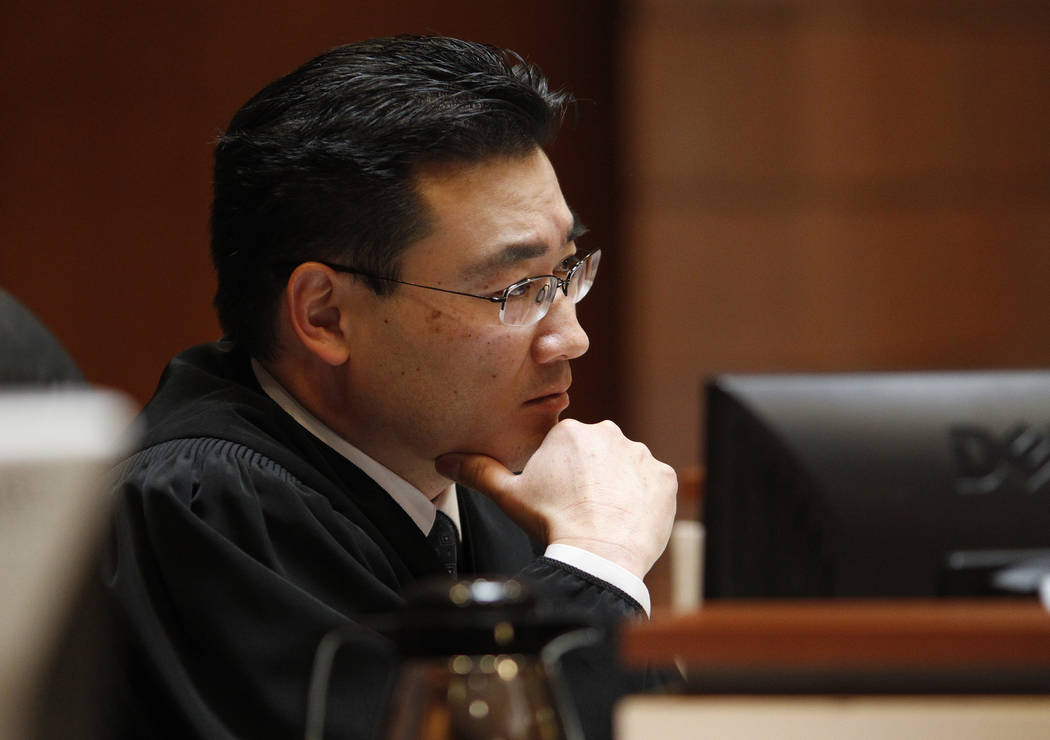 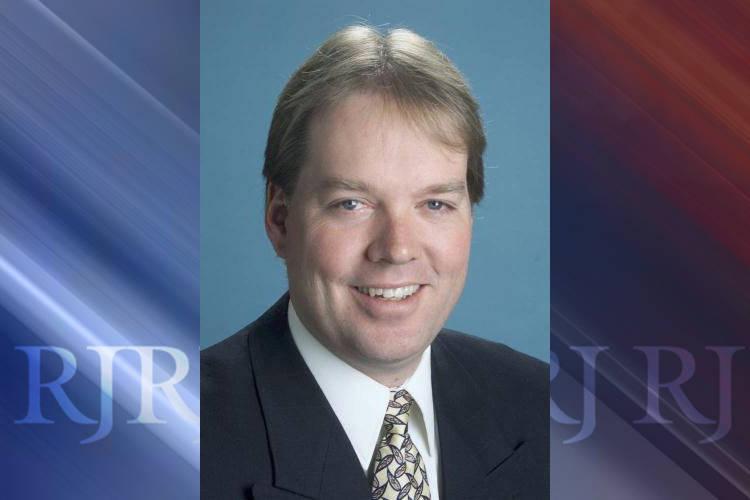 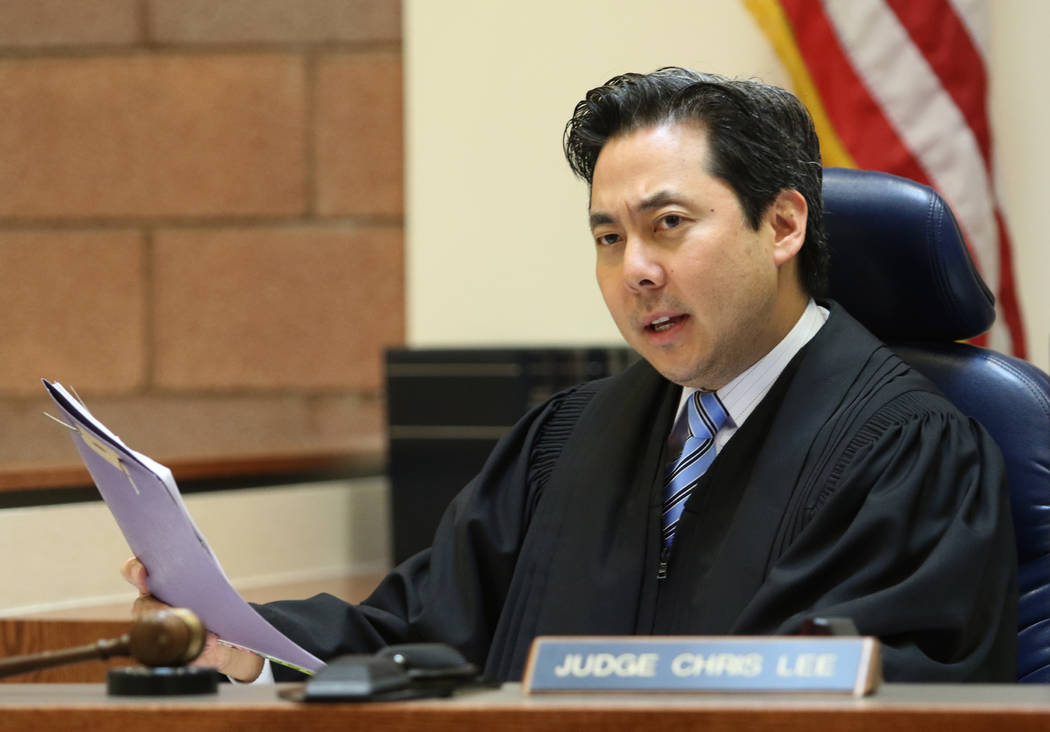 Justice of the Peace Chris Lee presides over a case in North Las Vegas Justice Court on May 21, 2015. (Ronda Churchill/Las Vegas Review-Journal) 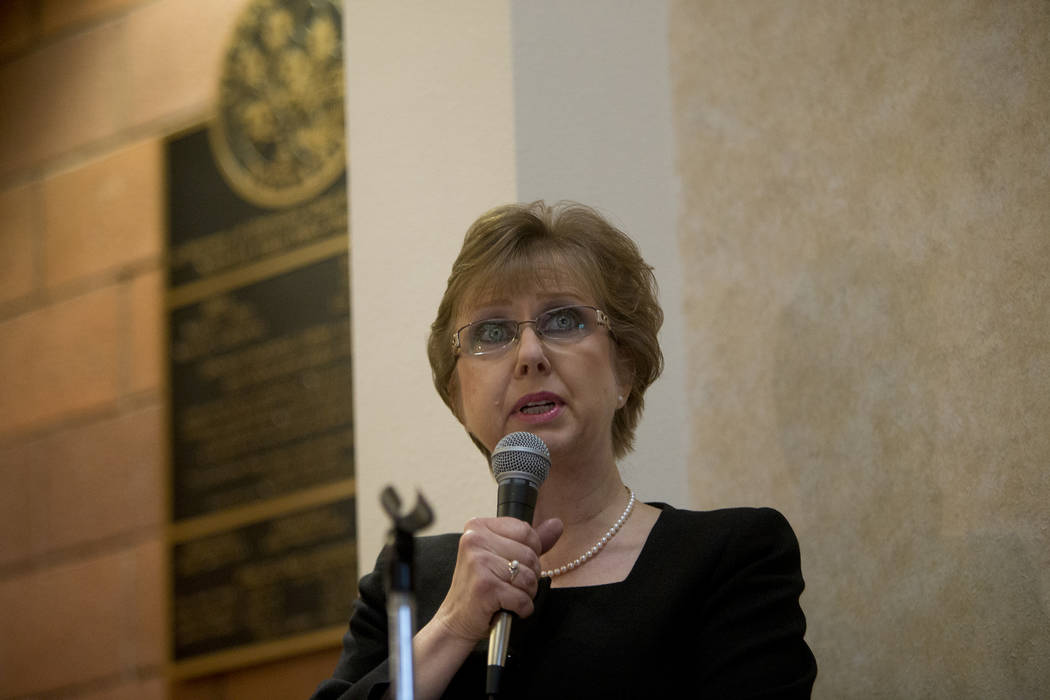 North Las Vegas Justice of the Peace Natalie Tyrrell speaks to the crowd about the qualities of Detective Chad Parque at a memorial on Jan. 9, 2018. Parque was killed in a car accident while on duty. (Rachel Aston Las Vegas Review-Journal @rookie__rae) 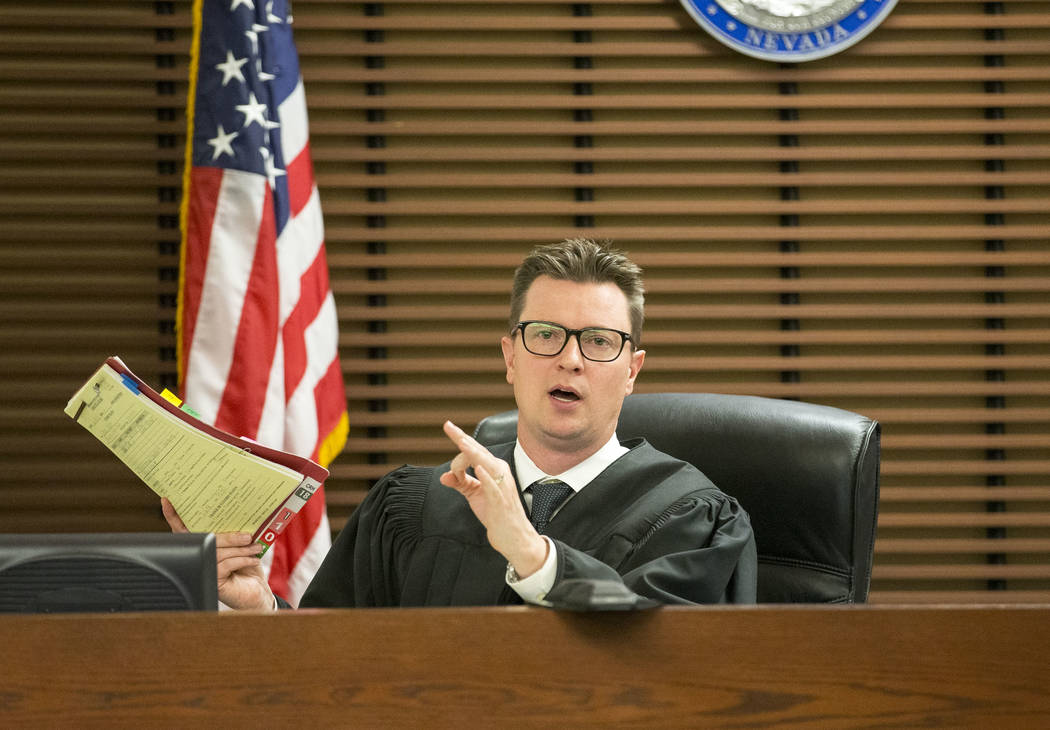 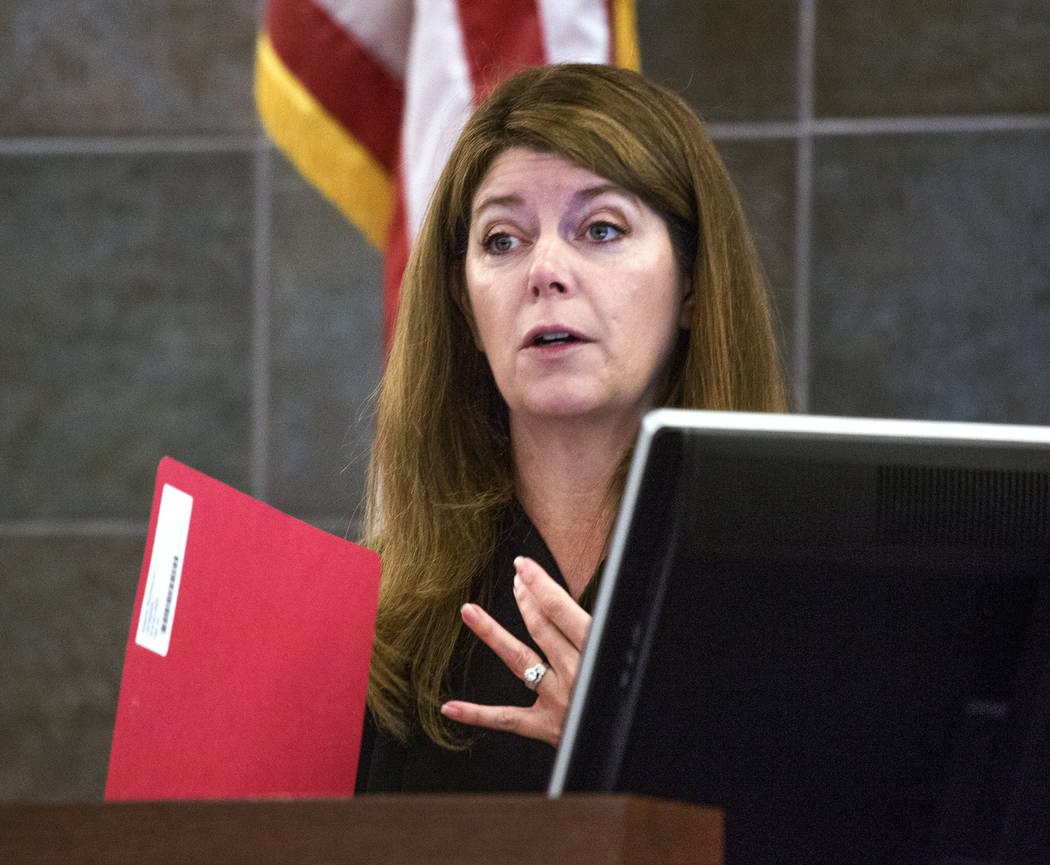 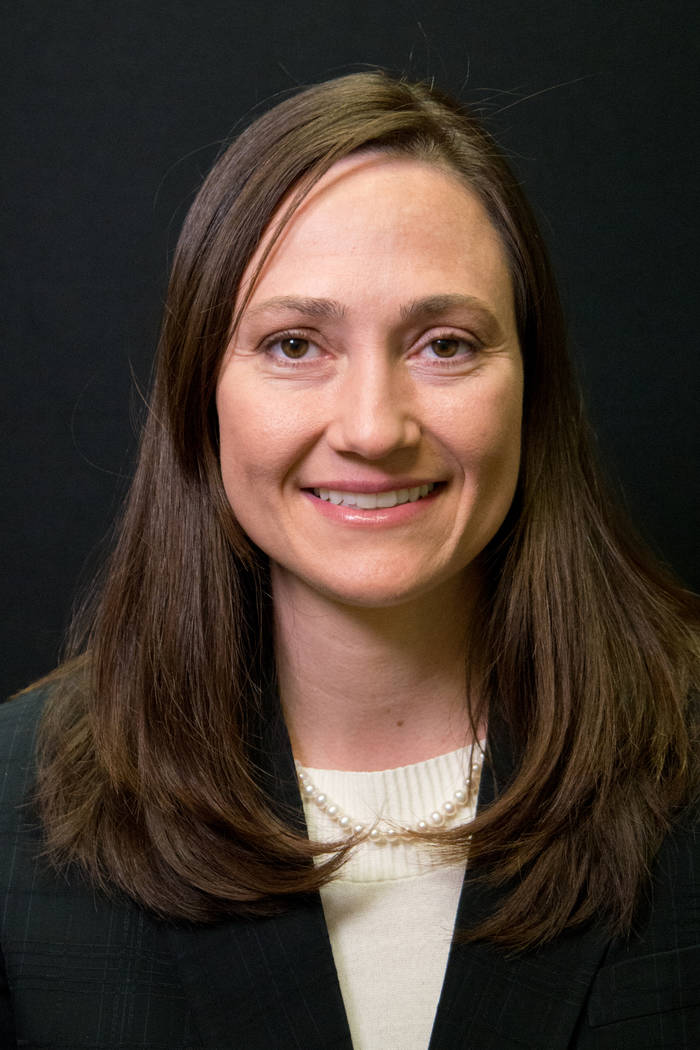 Rebecca Kern, then a candidate for Las Vegas Justice Court, in 2016. 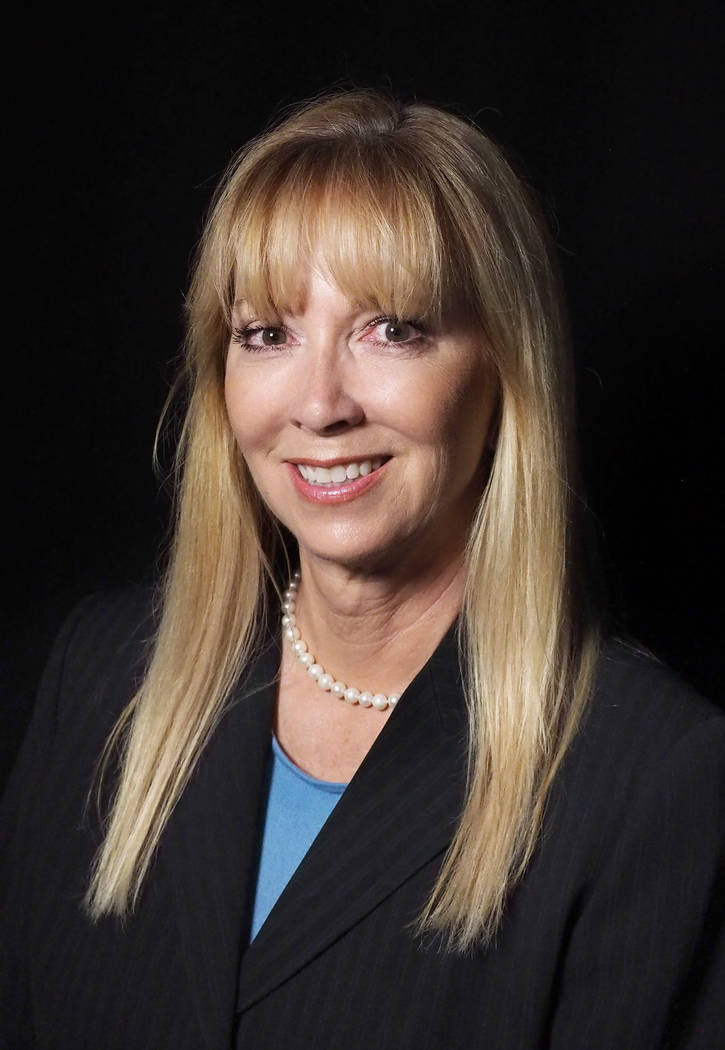 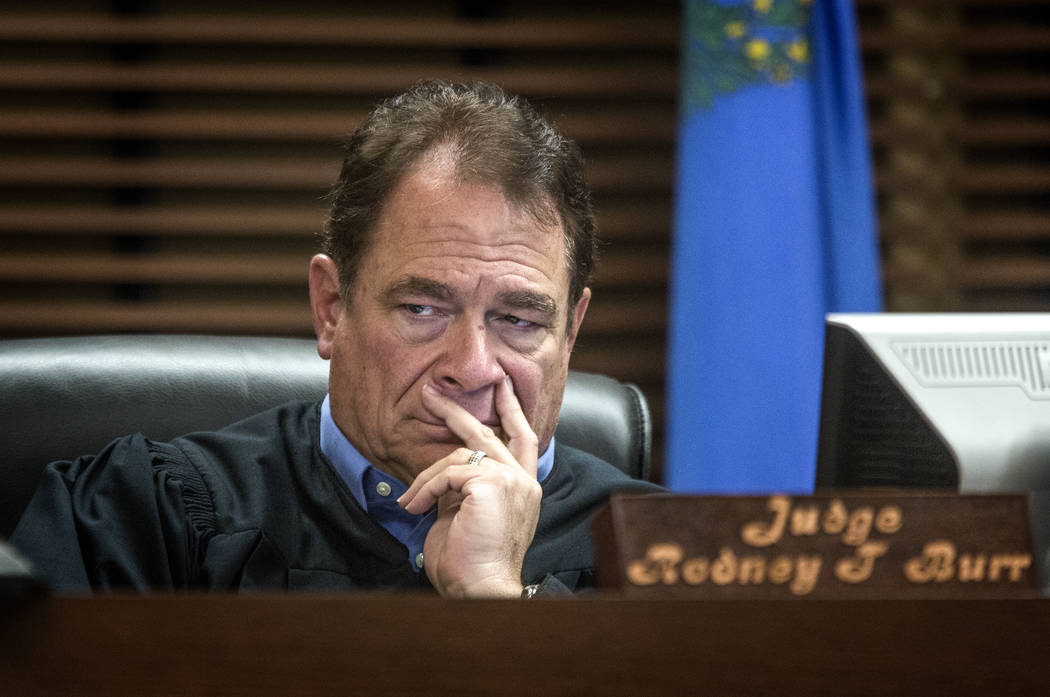 Then-Henderson Justice of the Peace Rodney Burr on Nov. 25, 2013. He is now a Henderson municipal judge. (Jeff Scheid/Las Vegas Review-Journal) 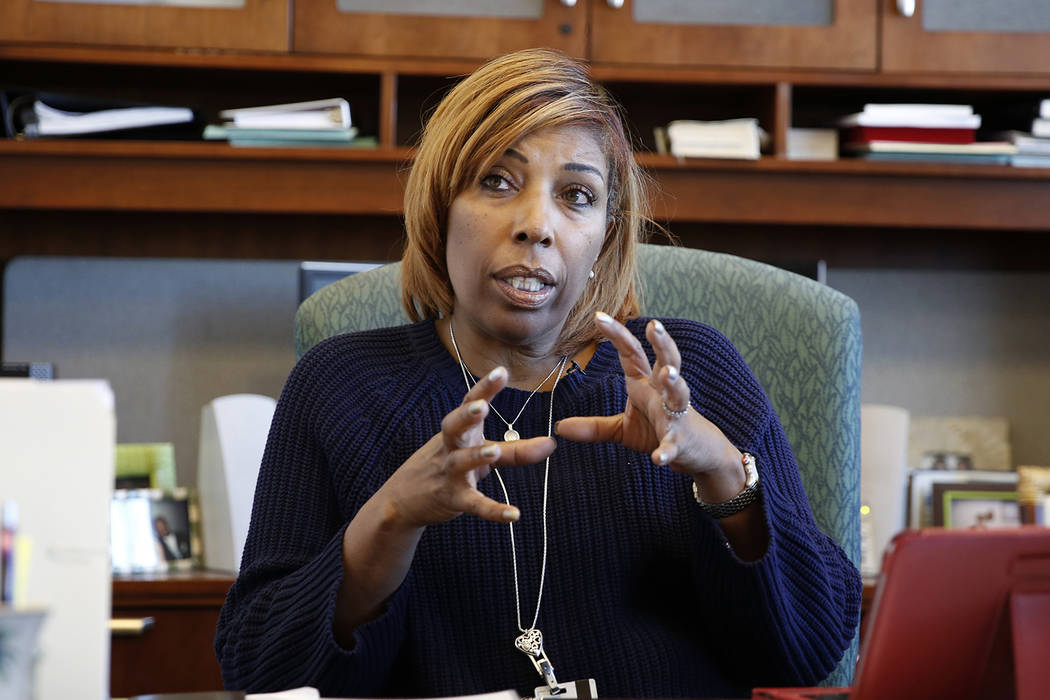 Las Vegas Justice of the Peace Karen Bennett-Haron speaks during an interview with the Review-Journal at the Regional Justice Center on March 28, 2018. Bizuayehu Tesfaye/Las Vegas Review-Journal @bizutesfaye 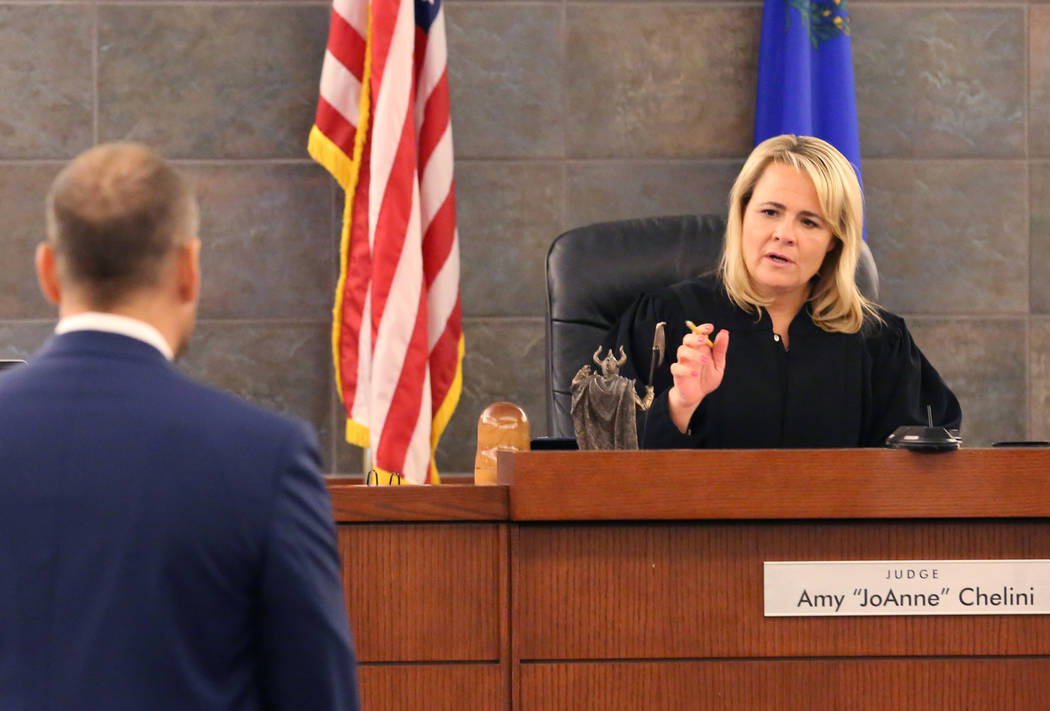 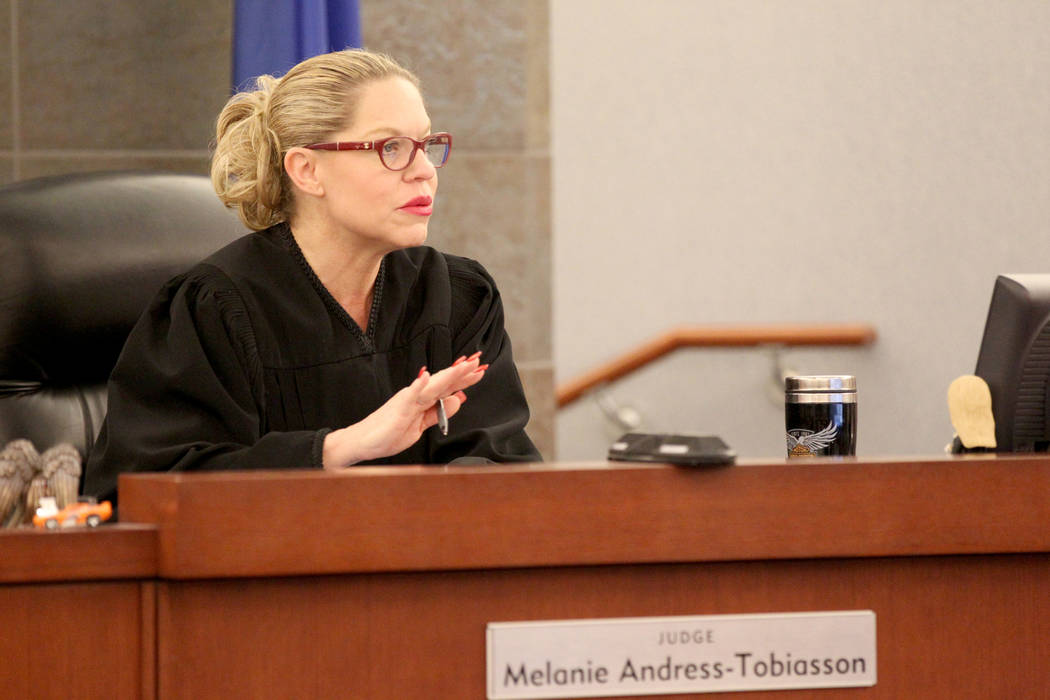 Only one municipal judge serves all of North Las Vegas, and he is tasked with handling cases that range from traffic violations to the collection of unpaid utility bills.

His name is Sean Hoeffgen, and survey results show he may be failing.

Only 41 percent of 29 respondents think he should stay on the bench, according to the Las Vegas Review-Journal’s latest Judicial Performance Evaluation, which asked Clark County attorneys to anonymously evaluate judges with whom they have had recent case-related experience.

The number of attorneys who evaluated Hoeffgen is small. Comparatively, more than 200 attorneys evaluated some of Nevada’s Supreme Court justices.

But the survey is still a valid way to measure how that anonymous group feels Hoeffgen is doing, according to Rebecca Gill, a UNLV professor and the survey’s project director.

According to the results, 36 percent of responding attorneys strongly disagreed and 21 percent disagreed that Hoeffgen accurately applied the law, rules of procedure and rules of evidence. Comparatively, 14 percent strongly agreed and 18 percent agreed.

The results also showed that, while about 50 percent of attorneys generally felt that Hoeffgen was unbiased in terms of race, gender and religion, about 30 percent disagreed. And while 40 percent generally felt he was courteous and respectful, 47 percent did not.

Hoeffgen did not respond to an interview request but was permitted to review his results ahead of the survey’s release.

He has been on the bench since 2005 and is up for re-election in 2022. In the Review-Journal’s last Judicial Performance Evaluation, in 2013, 66 percent of attorneys recommended that he stay on the bench.

In Henderson, attorneys thought each of the city’s three municipal judges should be retained. Judge Rodney Burr, who previously served as a Henderson justice of the peace, saw 95 percent of 39 attorneys recommend that he stay on the bench.

In Las Vegas, attorneys thought all six of the city’s municipal judges should keep their seats. Ninety-two percent of 51 attorneys recommended that Judge Bert Brown be retained.

North Las Vegas Justice of the Peace Kalani Hoo, who has been on the bench since 2013, received a 94 percent retention score, meaning most of the 50 respondents thought he should stay on the bench.

More than 90 percent of respondents also felt that Hoo was courteous and respectful — qualities that he attributes to his wife, an elementary school teacher, who taught him how to maintain decorum through respect rather than intimidation.

Hoo said he loves being a judge in “the people’s court,” where he is able to provide direct action for regular people on a regular basis.

In Henderson Justice Court, attorneys also thought each of the court’s three judges should be retained, according to the survey. Ninety-three percent of 67 attorneys recommended that Justice of the Peace Sam Bateman, a former Henderson city councilman, stay on the bench.

In Las Vegas Justice Court, the largest justice court in Clark County, attorneys felt that all but two of the court’s 15 evaluated judges should stay on the bench.

Those two are Justices of the Peace Cynthia Cruz and Rebecca Kern, who received retention scores of 48 percent and 47 percent, respectively.

Less than half of the responding attorneys felt Cruz, who has been on the bench since 2013, was consistently courteous and respectful.

Cruz did not respond to an interview request from the Review-Journal but was permitted to review her results ahead of the survey’s release. She is up for re-election in 2024.

And while most respondents generally felt Kern was kind and respectful, about half felt she did not accurately apply the law and did not weigh all evidence fairly before rendering decisions.

Kern has been on the bench since 2017 and is up for re-election in 2022. She also did not respond to an interview request but was permitted to review her results ahead of the survey’s release.

The retention question is meant to mock an election, and the results suggest that Justices of the Peace Suzan Baucum and Karen Bennett-Haron could keep their seats. But Baucum’s 54 percent retention score and Bennett-Haron’s 51 percent score also suggest they are vulnerable.

Attorneys felt that most of the Las Vegas Justice Court’s 11 other evaluated judges were performing generally well, the survey results show.

Justice of the Peace Amy Chelini saw 92 percent of 79 responding attorneys recommend that she stay on the bench, which Chelini has been on since 2017. Ninety percent of respondents also felt Chelini was courteous and respectful.

“You get people in there with no light on a bicycle, sleeping in public, trespassing,” Chelini said of her courtroom. “These are human beings, and I never want to lose sight of that.”

Chelini, who said she loves her job and is grateful to have it, said she works every day to avoid “black robe syndrome,” where judges, once elected, suddenly carry themselves as if they’re the most important person in the room.

“It’s important to realize that we’re no better than anyone else,” Chelini said, “and to treat people how we want to be treated, and how we would want our loved ones to be treated.”

Her positive results came in October, a few weeks ahead of a Nov. 8 filing in which the Nevada Commission on Judicial Discipline announced its intent to suspend her and another Las Vegas justice of the peace, Melanie Andress-Tobiasson, with pay for unknown reasons. A public hearing on the matter is slated to begin Dec. 16.

The judges, through their attorneys, have denied they engaged in improper conduct.

Andress-Tobiasson, who was appointed in 2009, is up for re-election in 2024. She received a 74 percent retention score on this year’s Judicial Performance Evaluation, down from 85 percent in 2013.