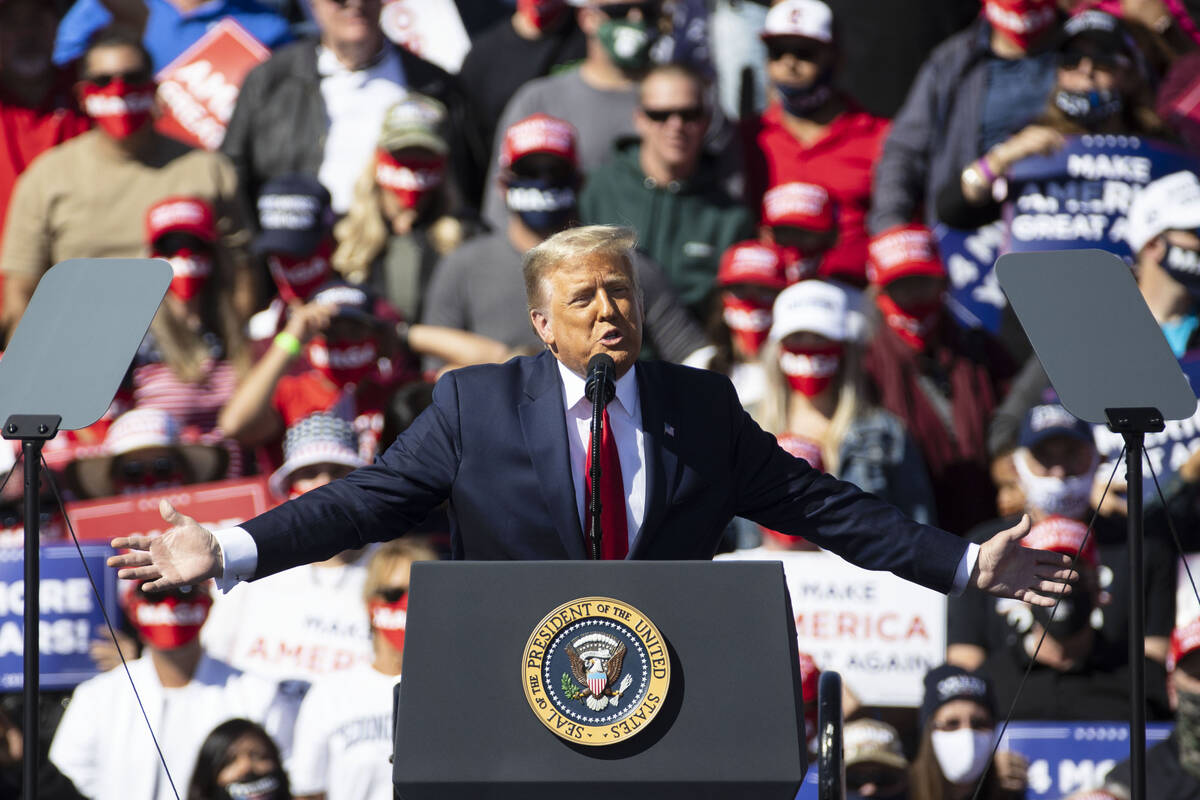 Former President Donald Trump said this month that he will visit Nevada soon.

Trump briefly mentioned the trip in an interview with My Pillow CEO Mike Lindell, a staunch supporter of the former president.

“We’re going to Nevada soon,” Trump said during the interview, recorded on Nov. 4. “We’re going to (have a) massive field and it’s going to be packed instantly.”

Trump spokesman Taylor Budowich said in a text message that the former president is looking forward to returning to the state “very soon to rally the (Make America Great Again) movement in support of Adam Laxalt, who continues to be a champion for the President’s America First agenda.”

Details about the visit will come later, he said.

He reaffirmed his support last month after Don Ahern, a major backer of GOP causes with ties to Trump, told the Las Vegas Review-Journal he had encouraged the former president to switch his endorsement in the race.

Laxalt has to win a primary race next year before he can take on incumbent U.S. Sen. Catherine Cortez Masto, a Democrat, in the general election.

Nevada’s U.S. Senate race is of national importance because the outcome could determine which party will control the evenly divided Senate.

“It is an honor to have President Trump’s endorsement and we can’t wait to have him back in Nevada to fire up our voters,” Laxalt said in a statement. “President Trump knows that the path to winning the majority in the Senate runs through Nevada and I am proud to stand by his side as we fight to restore our shared, America First principles. Together, we will take our country back from radical leftists like Joe Biden, Chuck Schumer and Senator Masto for the people of Nevada and the United States.”

In response, Andy Orellana, a spokesman for Nevada Democratic Victory, said the state is set to create thousands of jobs and fight drought and wildfires through the recently signed infrastructure package that Cortez Masto backed.

“Meanwhile, Adam Laxalt has said he would have killed that bill and the thousands of new jobs it will create because he is only focused on serving Trump, not Nevada.”

Laxalt, a Trump loyalist, was the former president’s campaign co-chair in Nevada last year. He became one of the state’s most prominent voices in the effort to overturn the results of the 2020 election by promoting unfounded claims of widespread voter fraud.

Nevada’s Republican secretary of state said her office found no evidence of widespread fraud in the election.