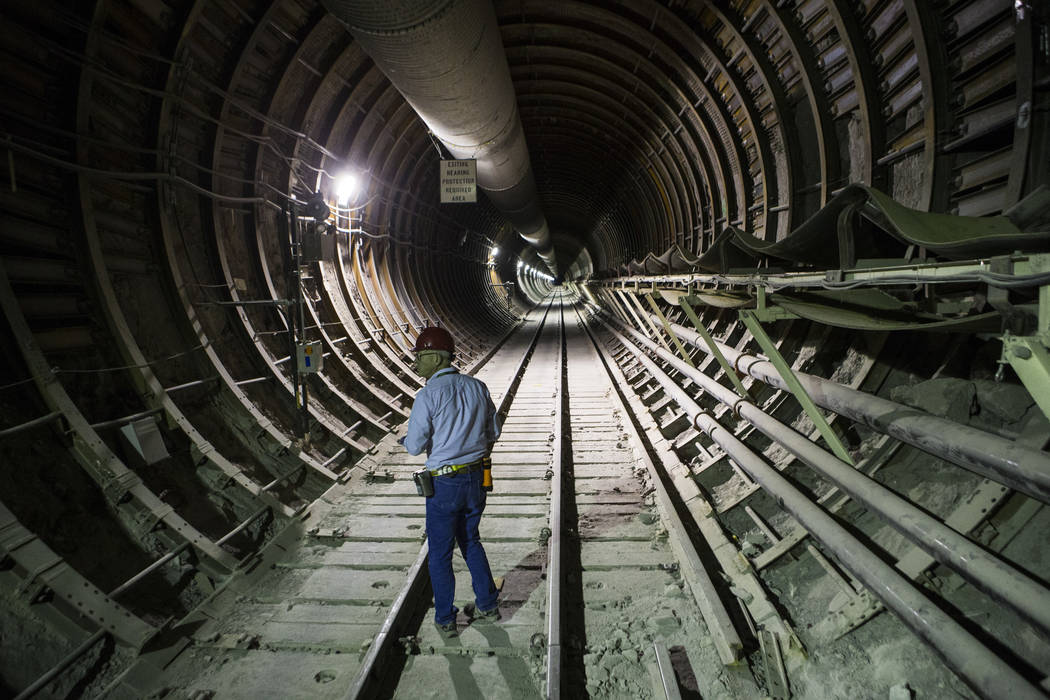 WASHINGTON — Despite the president’s election-eve comments suggesting a change in his stance on nuclear waste storage in Nevada, the state and political opponents are preparing for another push to revive the Yucca Mountain licensing process.

President Donald Trump has proposed funding for Yucca Mountain licensing in his past two budget requests — both approved by the House but killed by the Senate.

Then last week, in a campaign swing in Elko with Sen. Dean Heller, R-Nev., Trump said in a Reno television interview that he was “inclined to be against” storing nuclear waste at Yucca Mountain.

State officials, who have been fighting the administration for the past two years, were encouraged but wary of the presidential conversion as they prepare for new battles after the election.

“Our marching orders are to do what we were doing before these remarks were said,” noted Bob Halstead, executive director of the Nevada governor’s Agency for Nuclear Projects in Carson City.

Halstead said the state is watching how the administration prepares departmental budgets for the next fiscal year, and whether the president further elaborates on his most recent comments, which were made during the heat of a tight Senate election in Nevada.

“It would be game changing if the president came out and endorsed the bipartisan legislation the Nevada delegation has put forward,” Halstead said.

That hasn’t happened, and Nevada opponents of nuclear waste storage in the state are moving ahead.

Heller also attended the Eggs and Issues breakfast with the Las Vegas chamber of commerce, and the business leaders, Titus and Heller discussed bipartisan bills by the Nevada delegation in the House and Senate that would require consent of state and local officials prior to building a nuclear repository.

Only the state’s rural counties, including Nye, where Yucca Mountain is located, support the licensing process.

Nye County officials said the licensing process would determine whether the Yucca Mountain site would be safe, and with it an economic boon in high-paying federal jobs and contracts for local businesses providing tax revenue for schools and other needs.

Former Sen. Harry Reid, Gov. Brian Sandoval and the current state congressional delegation have effectively blocked development of Yucca Mountain since it was designated by Congress in 1987 as the sole site for permanent nuclear waste disposal.

The government has spent more than $15 billion researching the site. The licensing process under the Nuclear Regulatory Commission was underway when President Barack Obama killed funding seven years ago.

Trump has sought to revive the process and push forward with development of Yucca Mountain since he took office in 2017.

Then, last week, in Elko, he appeared to shift position.

“We will be looking at it very seriously over the next few weeks, and I agree with the people of Nevada,” Trump said.

Sen. Catherine Cortez Masto and Rep. Jacky Rosen, both Democrats, immediately urged Trump to back up his words and keep funding for Yucca Mountain out of his next budget request for fiscal year 2020.

Cortez Masto, who sits on the Senate Energy and Natural Resources Committee, with oversight over the Energy Department, also fired off missives to Energy Secretary Rick Perry and White House Budget Director Mick Mulvaney asking them not to include Yucca Mountain funding in their 2020 budgets.

Titus voiced suspicion about Trump’s election-eve reversal in a swing state where the Republican senator, Heller, is in a tight race for re-election for a seat the GOP needs to retain control of the Senate.

Heller has made Yucca Mountain a campaign issue, touting his effectiveness at getting the funding stripped from Senate appropriation bills, which have kept the project from advancing. Heller also has lobbied the administration to abandon plans to open Yucca Mountain.

After Reid retired, Heller picked up the lead on the Nuclear Waste Informed Consent Act, co-sponsored by Cortez Masto, which has languished in a Senate committee.

Identical legislation was filed in the House by Titus, co-sponsored by Rosen, who is challenging Heller, and Rep. Ruben Kihuen, D-Nev.

The bills would require the governor of a state and local governments to sign off on a federal proposal to build a nuclear repository.

Titus, who has led the House fight against permanent nuclear waste storage in Nevada, offered her legislation as an amendment to a bill by Rep. John Shimkus, R-Ill., to streamline the licensing process on Yucca Mountain and increase the amount of nuclear waste stored there when construction is completed.

The Titus amendment failed to be adopted and the Shimkus bill was passed by the House Energy and Commerce Committee by an overwhelming, bipartisan majority, and ultimately by the full House.

The Senate has yet to take up the Shimkus bill, and Sen. Lamar Alexander, R-Tenn., said he plans to introduce different legislation that would emphasize temporary storage sites until the political stalemate over Yucca Mountain is resolved.

Without action before year’s end, the Shimkus bill would die and need to be reintroduced and passed in a new Congress, one that may possibly have a Democrat-majority House.

Nevada officials hope the Nevada-backed consent bills may prove to be the consensus legislation needed to move forward on any plan to address the growing stockpile of nuclear waste being held at sites in nearly three dozen states nationwide.

A White House spokeswoman noted that the administration would be “very seriously” considering the issue in coming weeks.

“Congressman Shimkus appreciates the Trump administration’s budget requests in support of Yucca Mountain, and he encourages everyone to look at this issue ‘very seriously’ as the president said he would do over the next few weeks,” spokesman Jordan Haverly said.

“The reality is when people look at the repository site in the Nevada desert, and when they hear the world-class scientific evidence supporting its safety, most come away realizing it is the best location available for a national repository,” Haverly said.

Meanwhile, state officials are watching what happens inside the Beltway after the election.

“Every time you think you’ve seen everything in Washington, you realize you’ve seen nothing,” said Halstead, who referenced a song by the British rock band The Who in explaining the state’s position.

“As the song said, ‘We won’t get fooled again,’ “ Halstead said.