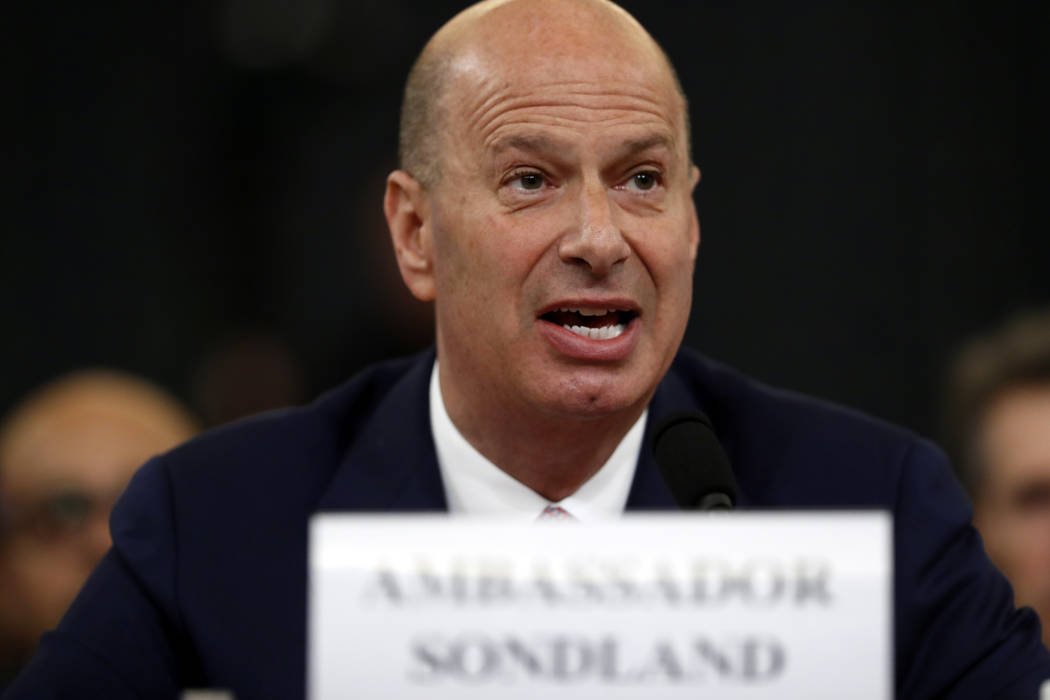 U.S. Ambassador to the European Union Gordon Sondland gives his opening statement as he testifies before the House Intelligence Committee on Capitol Hill in Washington, Wednesday, Nov. 20, 2019, during a public impeachment hearing of President Donald Trump's efforts to tie U.S. aid for Ukraine to investigations of his political opponents. (AP Photo/Andrew Harnik) 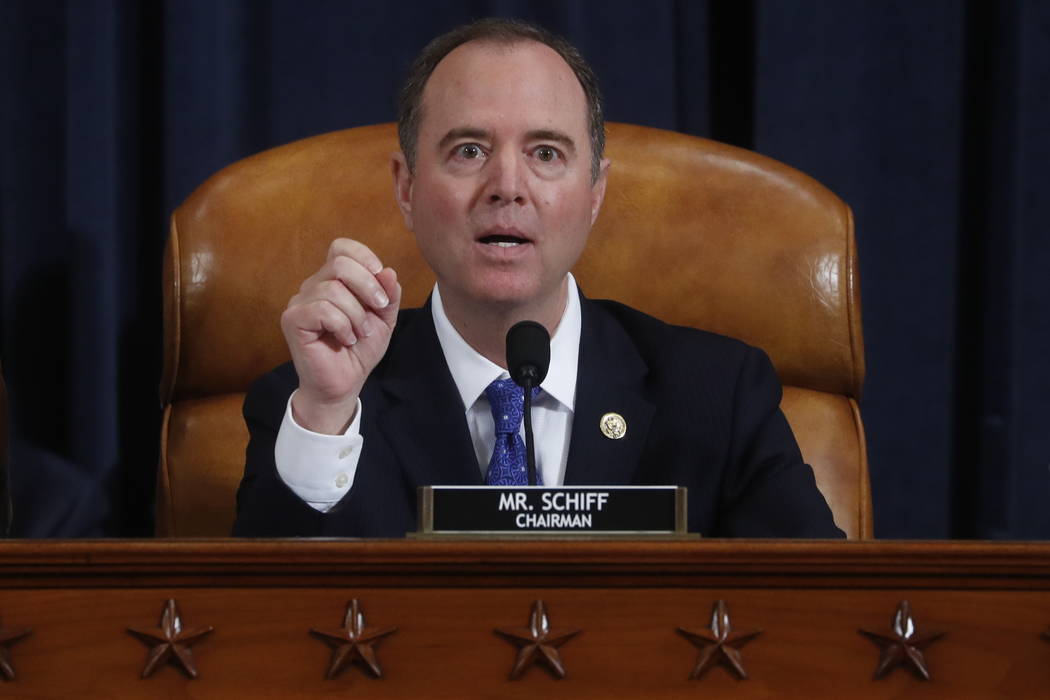 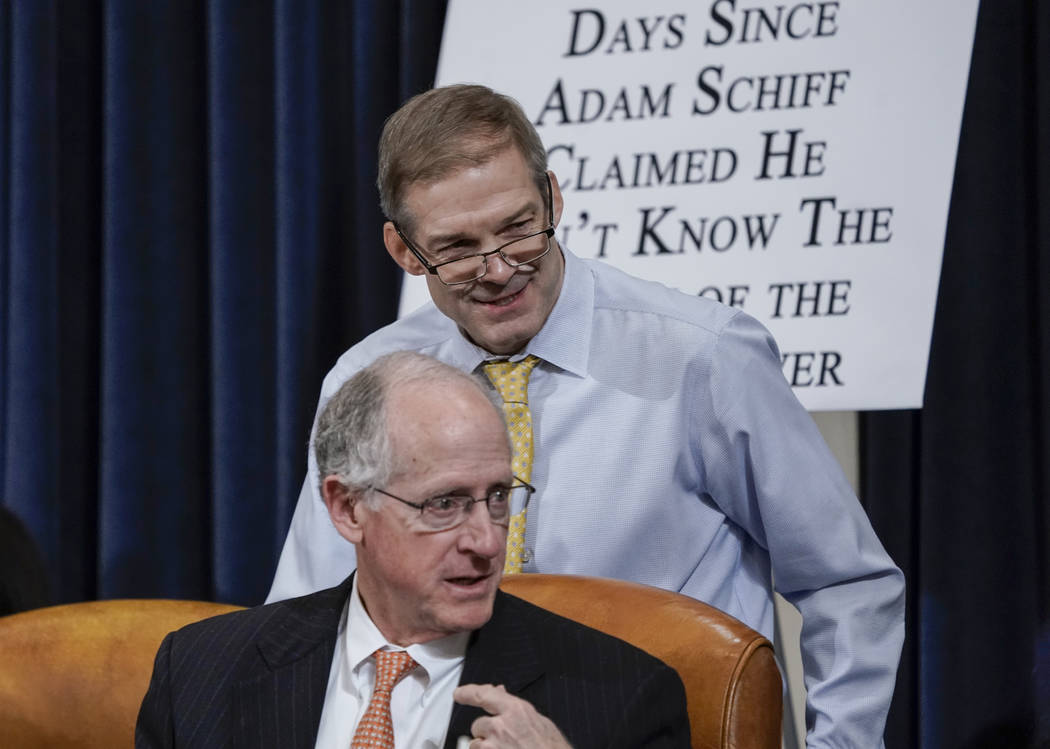 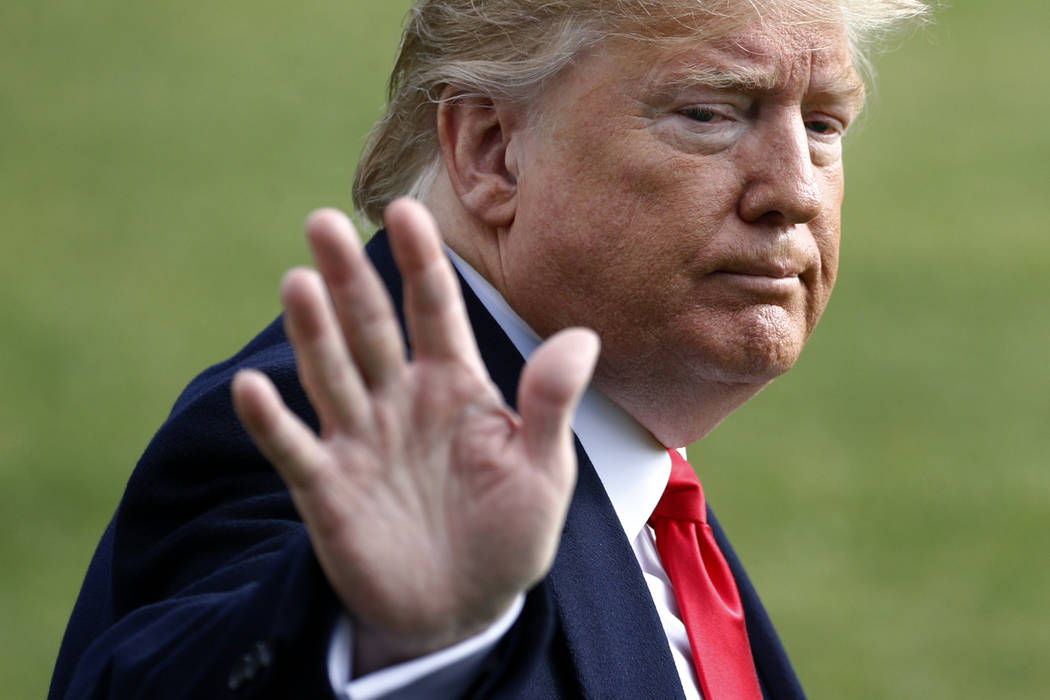 President Donald Trump walks to the Marine One helicopter after speaking to the media, Wednesday, Nov. 20, 2019, as he leaves the White House in Washington, en route to Texas. (Patrick Semansky/AP) 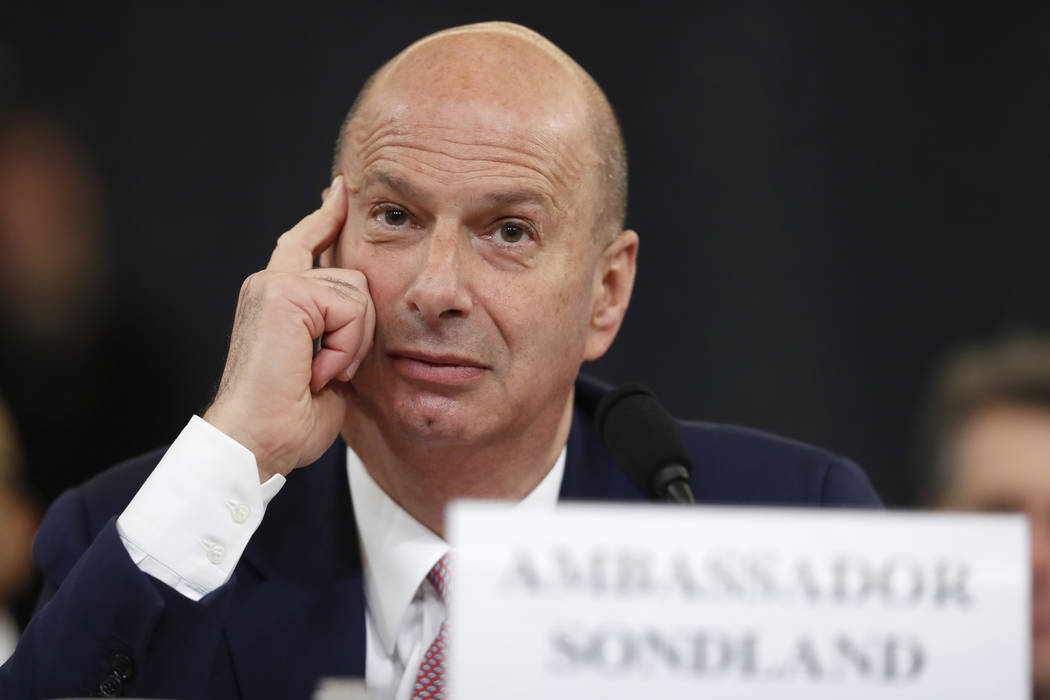 U.S. Ambassador to the European Union Gordon Sondland listens as he testifies before the House Intelligence Committee on Capitol Hill in Washington, Wednesday, Nov. 20, 2019, during a public impeachment hearing of President Donald Trump's efforts to tie U.S. aid for Ukraine to investigations of his political opponents. (AP Photo/Andrew Harnik) 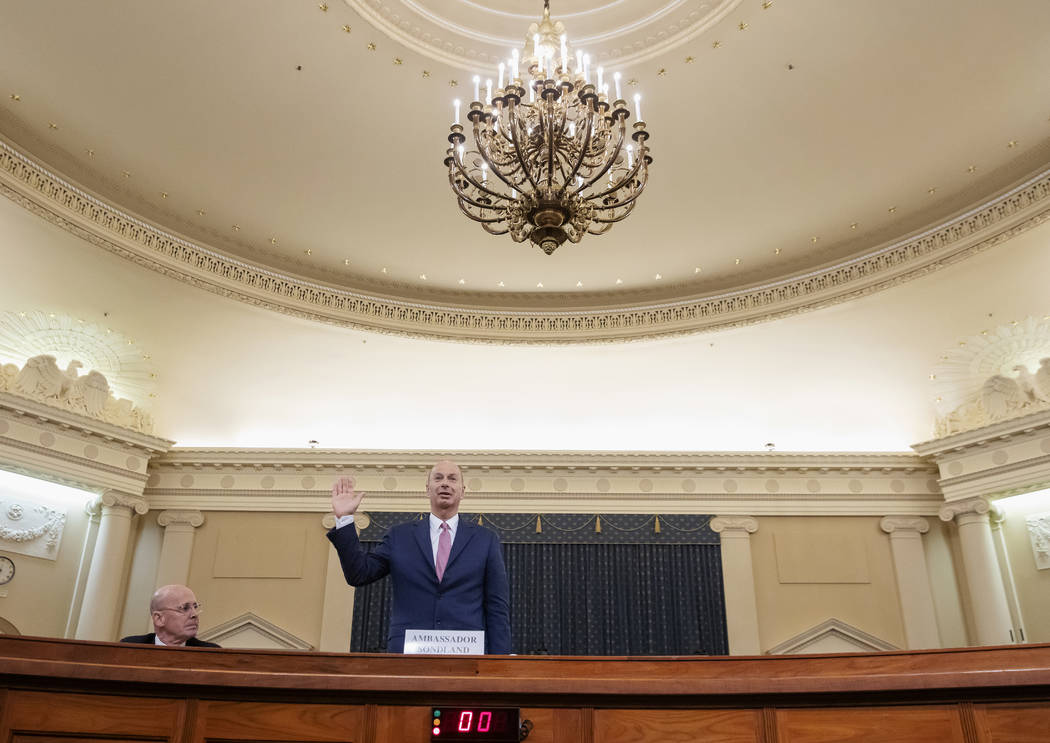 U.S. Ambassador to the European Union Gordon Sondland is sworn in to testify before the House Intelligence Committee on Capitol Hill in Washington, Wednesday, Nov. 20, 2019, during a public impeachment hearing of President Donald Trump's efforts to tie U.S. aid for Ukraine to investigations of his political opponents. (Erik S. Lesser/Pool Photo via AP) 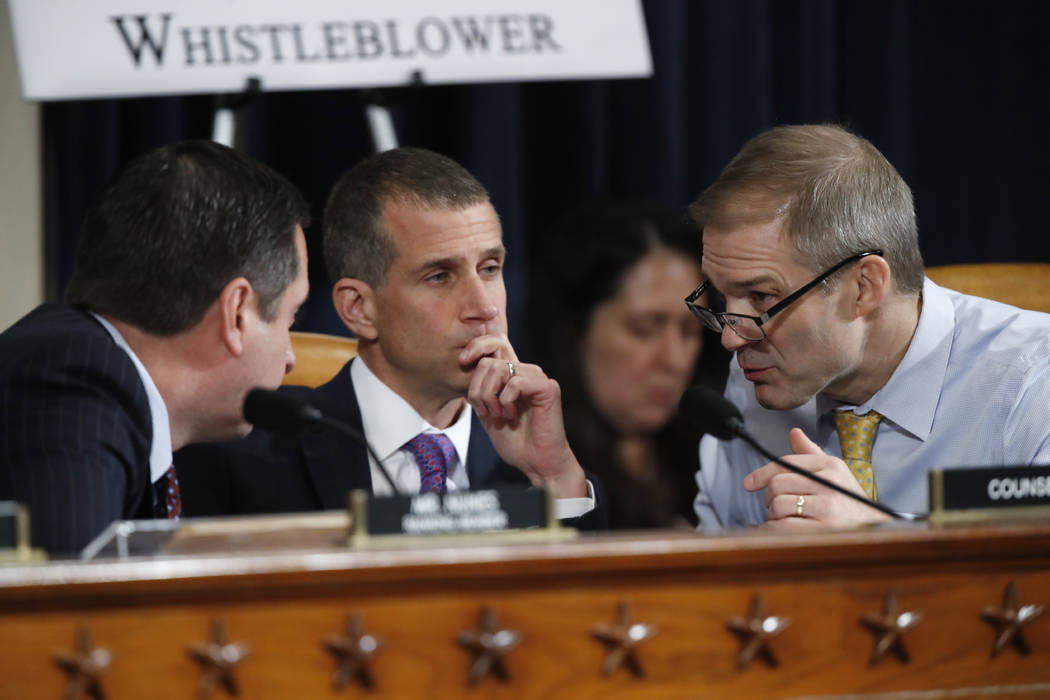 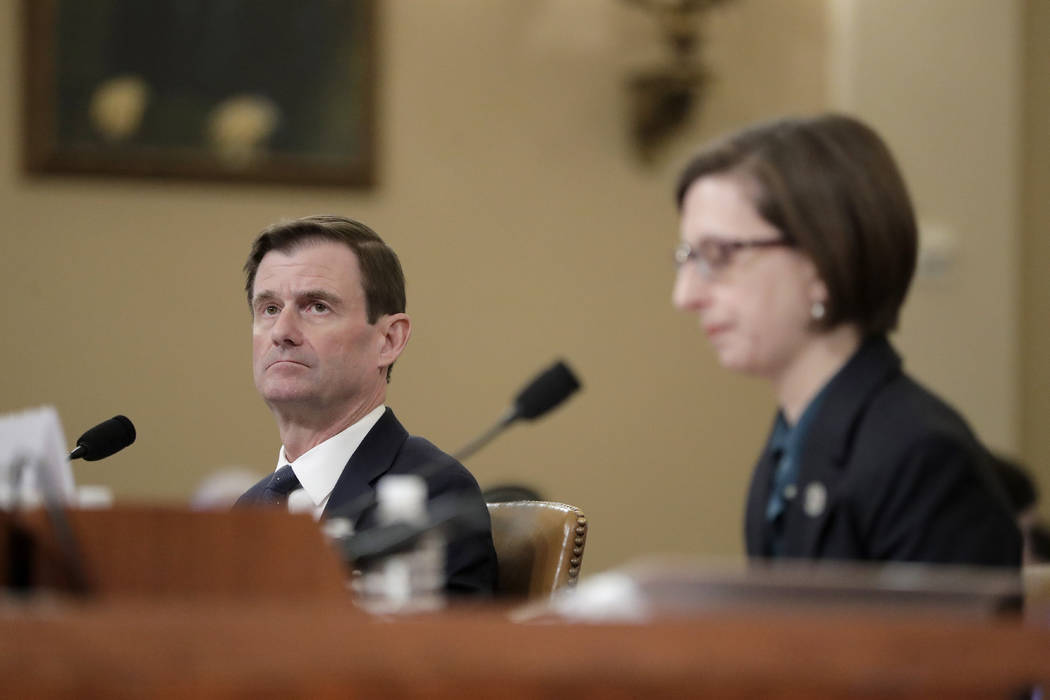 WASHINGTON — Ambassador Gordon Sondland told a House impeachment hearing Wednesday that he worked “at the express direction” of President Donald Trump and pushed the Ukrainian government for results that included an investigation into one of the president’s political rivals.

Sondland conceded that Trump never told him directly the security assistance was blocked for the probes, a gap in his account that Republicans and the White House seized on as evidence the president did nothing wrong.

The testimony was a bombshell for Democrats and Republicans, who saw Sondland as a pivotal witness in the impeachment inquiry to determine whether Trump abused his office in allegedly seeking a foreign investigation into former Vice President Joe Biden.

Intelligence Committee Chairman Adam Schiff, D-Calif., said Sondland’s testimony advanced the investigation, which is likely to result in the drafting of articles of impeachment and a House vote.

“This is a seminal moment in our investigation,” Schiff said at the fifth public hearing in the impeachment inquiry.

The testimony rippled across the nation’s capital to the White House, where Trump told reporters he wanted nothing from Ukraine.

“Not only did we win today, it’s over” for the impeachment proceedings, Trump said.

The president sought to distance himself from Sondland, a hotelier who donated $1 million to Trump’s inaugural committee, according to the Center for Responsive Politics, which follows money in politics.

Trump appointed Sondland as U.S. ambassador to the European Union.

“I don’t know him very well,” Trump told reporters Wednesday outside the White House, reading from notes. “I have not spoken to him much. This is not a man I know well. Seems like a nice guy, though.”

But Sondland and witnesses said he was in communication with Trump regularly.

Sondland said he, Energy Secretary Rick Perry and Ambassador Kurt Volker worked “with Mr. Rudy Giuliani on Ukraine matters at the express direction of the president of the United States.”

“We did not want to work with Mr. Giuliani,” Sondland said of Trump’s personal lawyer, but they “followed the president’s orders.”

Sondland said that as he was trying to arrange a White House visit for Ukrainian President Volodymyr Zelenskiy, Giuliani was demanding a quid pro quo — that Ukraine make a public statement announcing investigations into meddling in the 2016 U.S. elections and Burisma, a gas company where Hunter Biden, the former vice president’s son, was on the board of directors.

It was only later that Sondland said his group of Perry and Volker, working with Giuliani, learned that the White House had suspended security aid to Ukraine. Sondland said he was opposed to withholding the aid but never got a clear answer.

“I later came to believe that the resumption of security aid would not occur until there was a public statement from Ukraine committing to the investigations of the 2016 election and Burisma, as Mr. Giuliani had demanded,” Sondland testified.

“I shared concerns of the potential quid pro quo regarding the security aid with Sen. Ron Johnson,” Sondland said, referring to the Republican lawmaker from Wisconsin.

Sondland told Republican counsel Steve Castor that he never communicated directly with Trump about the arrangement.

“President Trump never told me directly that the aid was tied to the meeting,” Sondland said. “The aid was my own personal guess.”

The envoy appeared prepared to fend off scrutiny over the way his testimony has shifted in closed-door settings, saying, “My memory has not been perfect.” He said the State Department left him without access to emails, call records and other documents he needed in the inquiry. Republicans called his account “the trifecta of unreliability.”

Still, he did produce new emails and text messages to bolster his assertion that others in the administration were aware of the investigations he was pursuing for Trump from Ukraine.

Sondland insisted, twice, that he was “adamantly opposed to any suspension of aid” for Ukraine. “I followed the directions of the president.”

Republicans downplayed the testimony, saying nothing was said to directly implicate the president.

“This guy didn’t have any direct communication with the president about the aid,” said Rep. Jim Jordan, R-Ohio.

The top Republican on the committee, Rep. Devin Nunes of California, decried the inquiry and told the ambassador, “Mr. Sondland, you are here to be smeared.”

Nunes renewed his demand to hear from the whistleblower whose complaint about Trump’s July 25 phone call with Zelenskiy led the House to open the impeachment inquiry.

Sondland’s hours of testimony didn’t appear to sway Trump’s GOP allies in the Senate, who would ultimately be jurors in an impeachment trial.

Sen. Mike Braun of Indiana said the president’s actions “may not be appropriate, but this is the question: Does it rise to the level of impeachment? And it’s a totally different issue, and none of this has.”

Sondland said he kept the National Security Council, the State Department, acting White House chief of staff Mick Mulvaney and the Ukrainians informed of what was going on before the call between Trump and Zelenskiy.

“Everyone was in the loop. It was not secret. Everyone was informed via email on July 19, days before the presidential call,” Sondland testified.

Sondland also said he told Vice President Mike Pence about the delay in aid to Ukraine tied to the investigations while attending a meeting with Zelenskiy in Warsaw.

“As my other State Department colleagues have testified, this security aid was critical to Ukraine’s defense and should not have been delayed,” Sondland told the committee. “But my goal, at the time, was to do what was necessary to get the aid released, to break the logjam.”

Pence’s office put out a statement immediately refuting the claim.

In the statement, Marc Short, the vice president’s chief of staff, said Pence “never had a conversation with Gordon Sondland about investigating the Bidens, Burisma, or the conditional release of financial aid to Ukraine based upon potential investigations.”

Short added that Sondland was “never alone” with Pence during the Sept. 1 trip to Poland.

Later in the day, Pence told a Wisconsin television station that he has no recollection of a conversation described by Sondland.

“I don’t recall any discussions with Ambassador Sondland before my meeting with President Zelenskiy that had to do with investigations,” Pence said.

At first, Sondland said he didn’t know the investigation into Burisma was an indirect reference to Hunter Biden and the former vice president, who is seeking the Democratic presidential nomination.

It was only after the July 25 phone call between the two leaders was made public that he learned of the Biden connection with the investigations, he said.

“Looking back, I find it very odd that neither I, nor Ambassador Taylor, nor Ambassador Volker ever received a detailed readout of that call with the Biden references,” Sondland said.

Sondland told lawmakers in an earlier deposition that he arranged the agreement that freed aid for the investigations that Trump sought. Since then, Sondland reversed his testimony, making him a target Wednesday for both Democrats and Republicans.

A State Department official, David Holmes, testified before the committee behind closed doors, and will publicly testify Thursday, that he overheard a cellphone call between Trump and Sondland in Ukraine.

In that call, Sondland told Trump that the Ukrainians were going to launch the investigations.

Sondland said he didn’t remember specifics of the conversation, but he didn’t discount the testimony.

When asked if he remembered telling Trump that Zelenskiy “loves your a—” and would do anything for him, the ambassador smiled and said: “That sounds like something I would say. That’s how me and President Trump communicate.”

Sondland also recalls Trump saying he “was not a big fan of Ukraine” and felt that officials in that country worked against him in the 2016 election. An investigation by special counsel Robert Mueller, however, identified Russia as the culprit in 2016 election meddling.

Also testifying before the committee Wednesday was Laura Cooper, a deputy assistant secretary of defense, and David Hale, a State Department undersecretary for political affairs.

In previous closed-door testimony, Cooper told lawmakers that Trump directed freezing military aid to Ukraine through the Office of Management and Budget over corruption concerns.

Hale spoke out about the smear campaign launched by Trump loyalists to remove U.S. Ambassador to Ukraine Marie Yovanovitch, who testified last week about threats against her.

Republicans have requested the testimony of Hunter Biden and the whistleblower — a request Schiff has yet to grant.