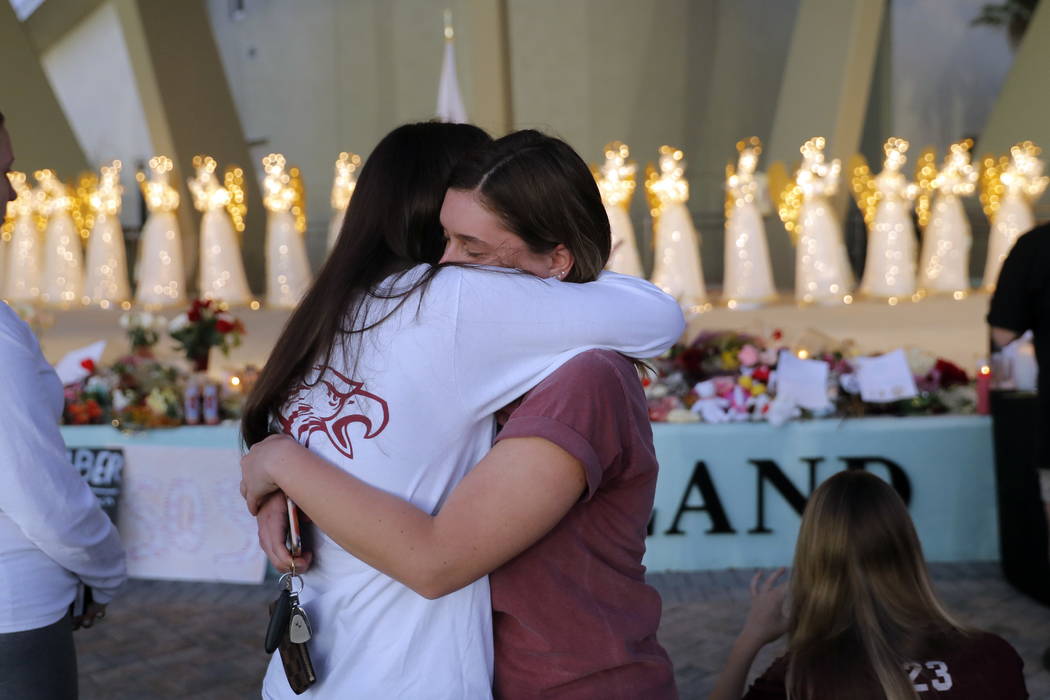 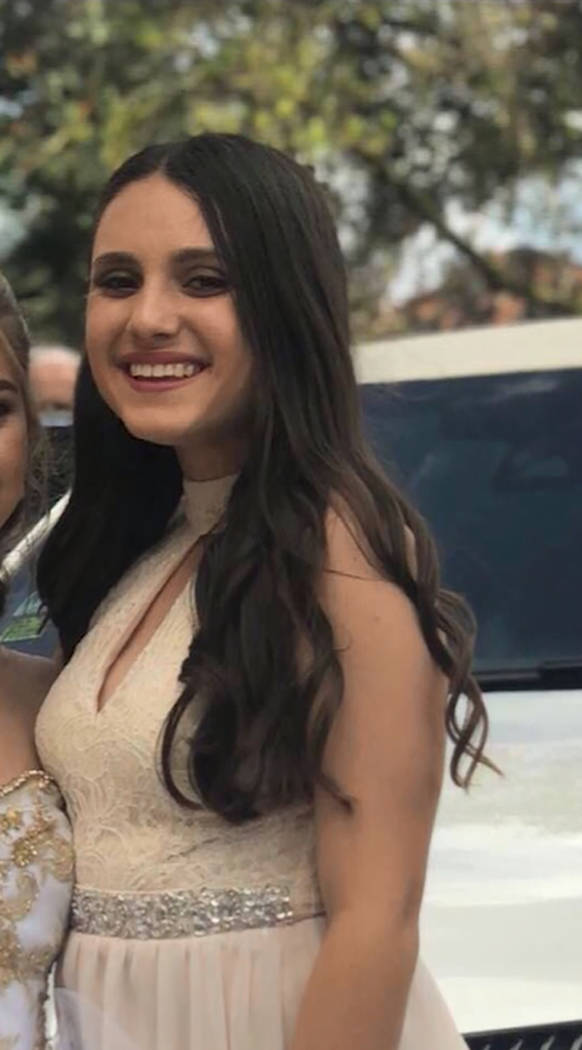 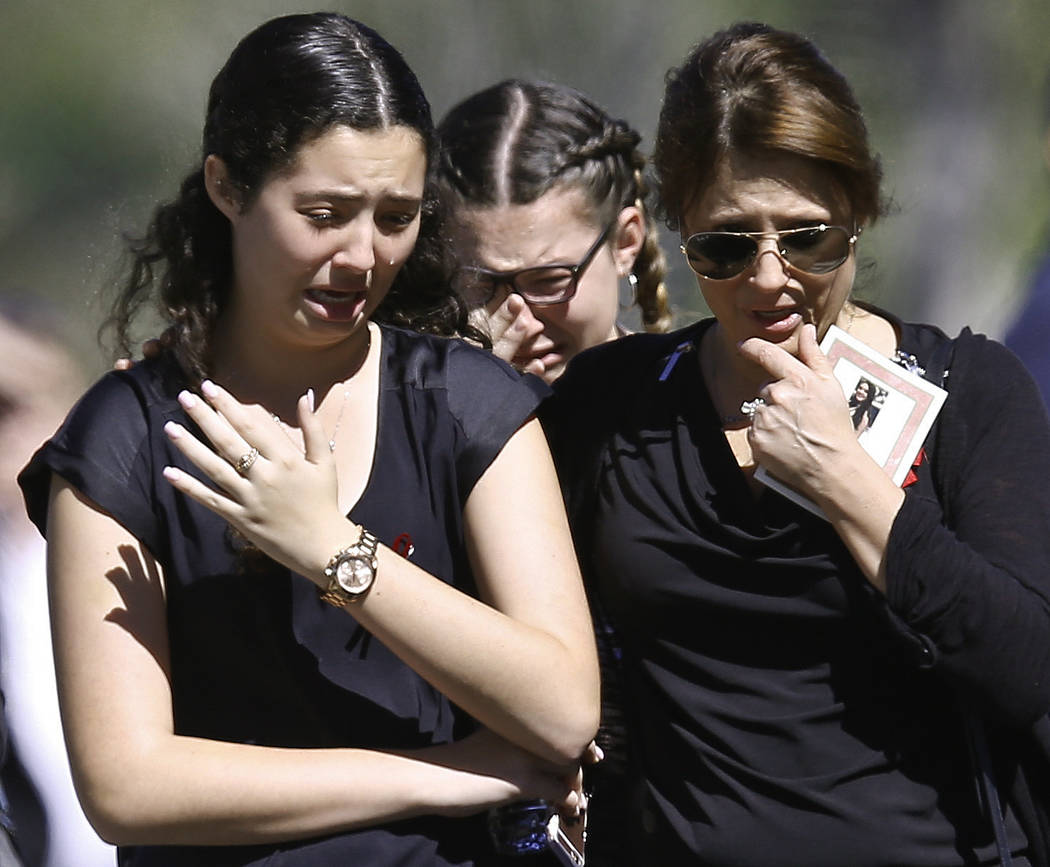 People weep as they leave a funeral service for Alyssa Alhadeff at the Star of David Funeral Chapel in North Lauderdale, Fla., Friday, Feb. 16, 2018. Nikolas Cruz, a former student, was charged with 17 counts of premeditated murder on Thursday. (AP Photo/Brynn Anderson) 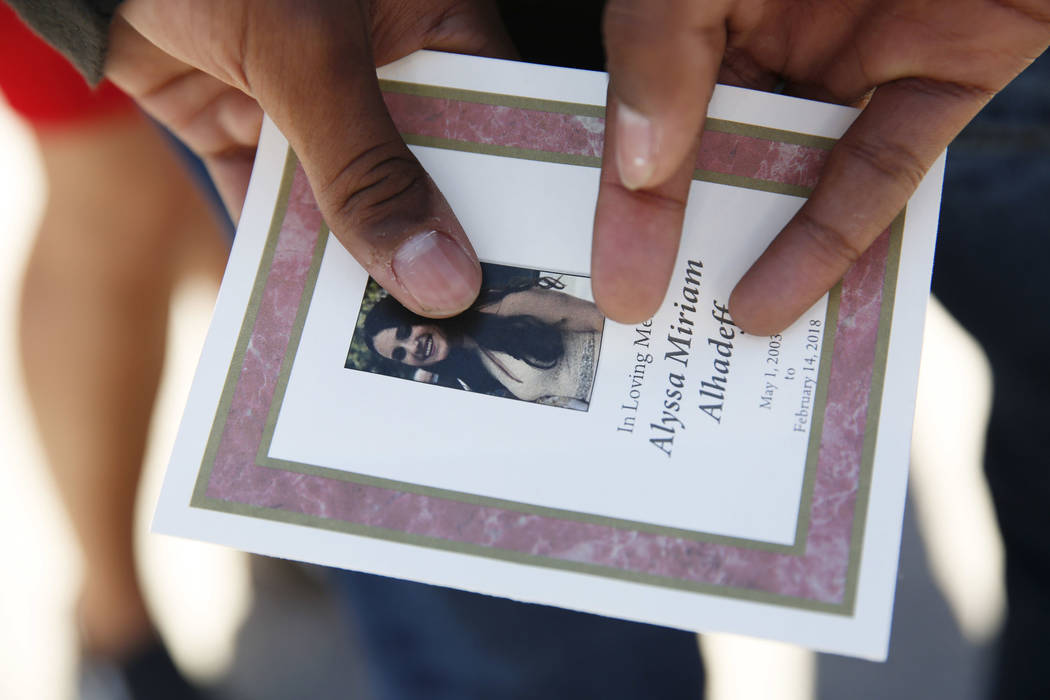 Louis Rodrigues, 14, a classmate of Alyssa Alhadeff, holds her funeral program in his hand at the Star of David Funeral Chapel in North Lauderdale, Fla., Friday, Feb. 16, 2018. Alhadeff was one of the victims of Wednesday shooting at Marjory Stoneman Douglas High School. Nikolas Cruz, a former student, was charged with 17 counts of premeditated murder. (AP Photo/Brynn Anderson) 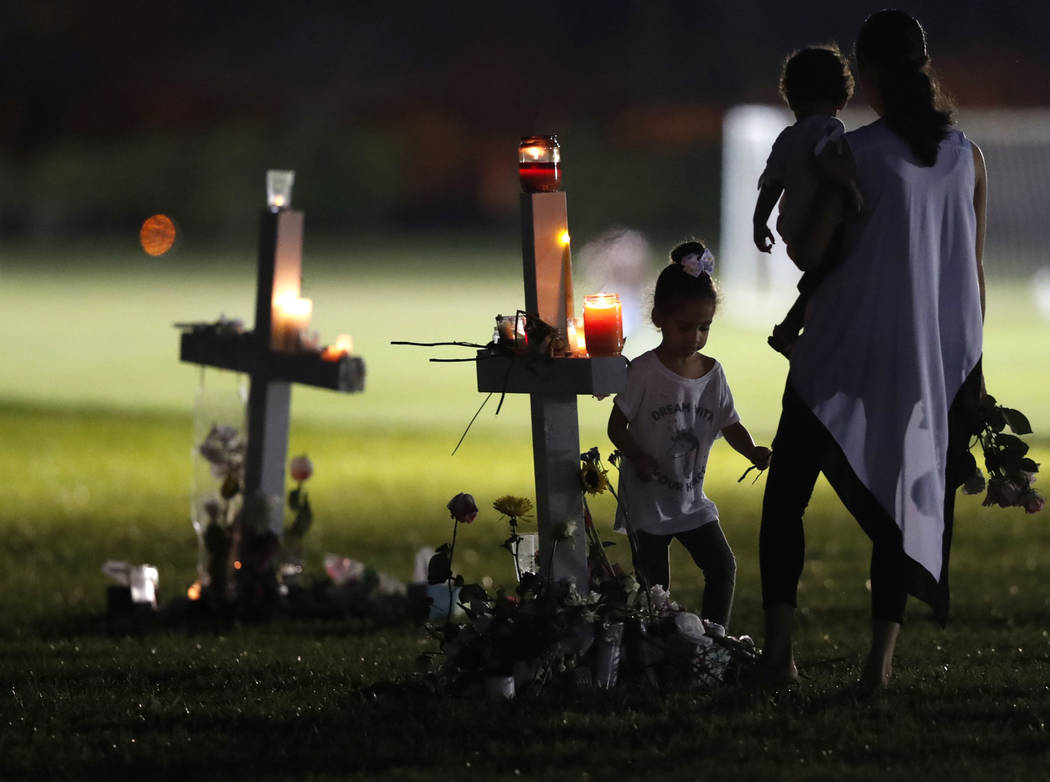 People pay homage at the memorial crosses, for the 17 deceased students and faculty from the Wednesday shooting at Marjory Stoneman Douglas High School, in Parkland, Fla., Friday, Feb. 16, 2018. Nikolas Cruz, a former student, was charged with 17 counts of premeditated murder on Thursday. (AP Photo/Gerald Herbert) 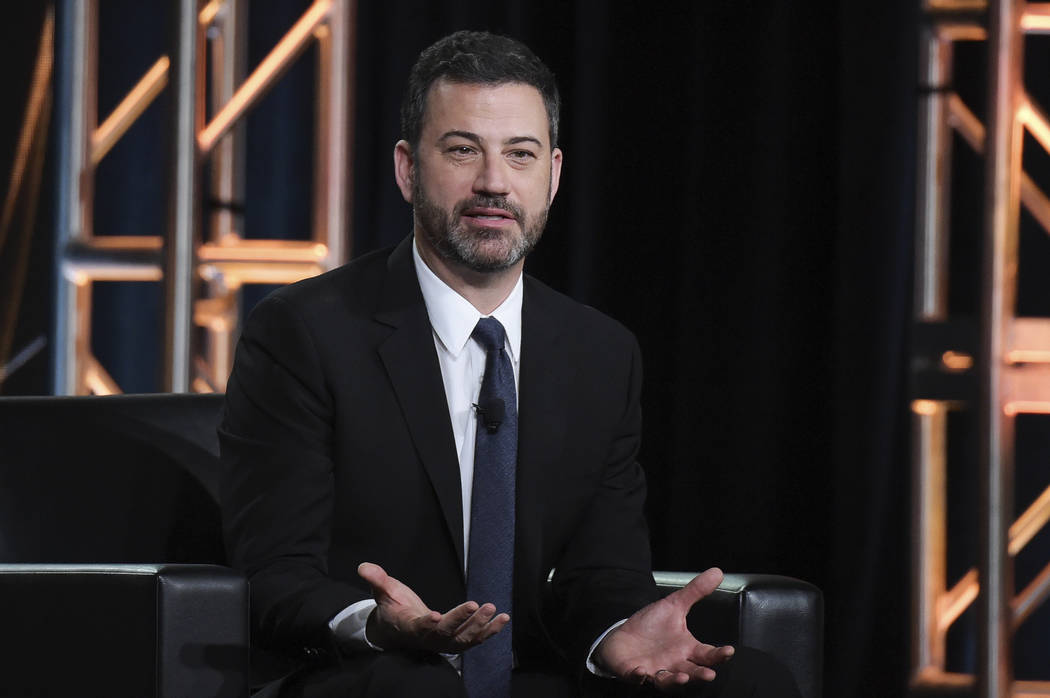 Trump had taken a different approach. A supporter of the Second Amendment, Trump delivered remarks designed to calm the fears of parents and children, and he promised to tackle school safety and “the difficult issue of mental health.”

The host of “Jimmy Kimmel Live” was enraged that Trump offered no specific proposal to limit gun ownership, and he had no patience for those who argued it was too soon to talk about gun politics.

“If you don’t think we have to do something about it,” Kimmel said to the camera as a way of addressing Trump, “you’re obviously mentally ill.”

Victims’ families demanded more. Lori Alhadeff, whose daughter Alyssa was killed at Marjory Stoneman Douglas High School, shouted at Trump on CNN. “You can stop the guns from getting into these children’s hands,” she said.

“I just spent the last two hours putting (together) the burial arrangements for my daughter’s funeral, who’s 14,” Alhadeff added. “President Trump, please do something. Do something. Action. We need it now. These kids need safety now.”

House Minority Leader Nancy Pelosi, D-Calif., shared Alhadeff’s mindset. She argued Thursday that Democrats needed to win the majority in Congress to bring about change — such as setting up a select committee on gun violence and passing expanded background check legislation.

“I’d rather pass gun safety legislation than win the election,” she told reporters, “because people die from this.”

Trump proposed no such changes. “We are committed to working with state and local leaders to help secure our schools” and address mental health issues, he said in his remarks Thursday.

However, Trump’s budget request for the 2019 fiscal year, issued two days before the shooting, calls for cuts in Medicaid, the major source for treating mental health problems, and school safety programs.

After the Oct. 1 mass shooting in Las Vegas that killed 58 people, the National Rifle Association shocked Beltway insiders by coming out in favor of additional regulations for bump stocks, devices used by the Mandalay Bay shooter to accelerate his rate of fire.

Observers wondered if the moment had arrived when both parties could work together to pass a modest but common-sense reform.

Sen. Dianne Feinstein, D-Calif., filed a bill to ban the devices. Although her measure initially had Republican support, GOP lawmakers backed away when the NRA clarified its position that bump stocks would be best regulated administratively by the Bureau of Alcohol, Tobacco, Firearms and Explosives.

The ATF twice had ruled that it does not have legal authority to restrict production or purchase of the devices, but it vowed to review the matter again.

GOP leadership signaled its reluctance to toughen current gun laws on Dec. 6 when the House voted 231-198, mostly along party lines, to pass the Concealed Carry Reciprocity Act. The bill, a top NRA legislative priority, would require states to recognize concealed carry permits issued in other states.

Tucked into the bill is a provision ordering the U.S. attorney general to study the use of bump stocks and report back to the House Judiciary Committee. Also in the bill is a provision to bolster federal and state reporting to the National Instant Criminal Background Check System to close gaps in the system exposed after the Sutherland Springs, Texas, church shooting that left 26 dead in November.

In that case, the shooter had a history of domestic violence that spanned years before the attack but was able to buy weapons because the Air Force did not submit his criminal history to the FBI.

That bill is still pending in the Senate, where it is not expected to pass.

‘A little bit of hope’

Retired NASA astronaut Mark Kelly, who is married to Gabby Giffords, the former Arizona Democratic congresswoman seriously injured by a mass shooter in 2011, spoke Thursday on a conference call sponsored by the Giffords Law Center to Prevent Gun Violence.

As he watched the aftermath of the Parkland shooting, Kelly said he experienced “a little bit of hope” because he saw “not just thoughts and prayers and grievance and mourning, but what possibly could turn into effective policy.”

Kelly focused on federal law that prohibits licensed firearms dealers from selling handguns to those younger than 21. His group has called for a ban on sales of all firearms to those under 21.

Florida law exempts the purchase of long guns, including the AR-15, from a three-day waiting period that applies to handgun purchases. The Giffords center argues that “waiting period laws should apply to assault weapons as well.”

Public opinion can work both ways on these issues. After the Oct. 1 shooting, the Politico/Morning Consult poll found that 65 percent of registered voters, including a majority of gun owners, supported a ban on bump stocks.

As it reconsiders its treatment of bump stocks, the ATF has received more than 50,000 public comments on the issue — and the overwhelming majority of them are anti-regulation, according to The Trace, a nonprofit news organization.

Erich Pratt, executive director of Gun Owners of America, said in a statement, “If bump stocks are regulated, then triggers, magazines and semi-automatic firearms that allegedly ‘increase the rate of fire’ are at risk of regulation or bans as well.”

For every push for more gun regulation, it seems, there is a commensurate reaction against more rules. When Kimmel called for laws that “take assault rifles out of the hands of people who are going to shoot our kids,” his remarks had the potential to drive up gun sales, as researchers have documented after some previous mass shootings.

“The conversation gives people the bunker mentality of ‘Let’s stock up on guns and ammo’” before the government takes them away, said GOP consultant and CNN contributor Alice Stewart.

Such horrors drive up gun sales for two reasons, Studdert said. People buy guns because they don’t feel safe, and some fear the government might take away their ability to buy firearms and ammunition.

While that may have been true during the years President Barack Obama was in office, Studdert told the Las Vegas Review-Journal, that motivation “has disappeared” under the Trump administration. “We shouldn’t expect to see any substantial gun legislation in the next three years.”

In a 2000 book, “The America We Deserve,” Trump criticized the GOP for walking the NRA line. He also wrote, “I generally oppose gun control, but I support the ban on assault weapons and I support a slightly longer waiting period to purchase a gun.”

But last year, Trump told the NRA, “the eight-year assault on your Second Amendment freedoms has come to a crashing end.”

Even still, the gun industry has little cause for celebration. According to the FBI, background checks for gun purchases dropped 8 percent, from 27 million in 2016 to 25 million in 2017. Gun manufacturers have reported declining revenue, and Remington Outdoor Co. has filed for bankruptcy.

If Washington hasn’t changed, perhaps Americans are beginning to.