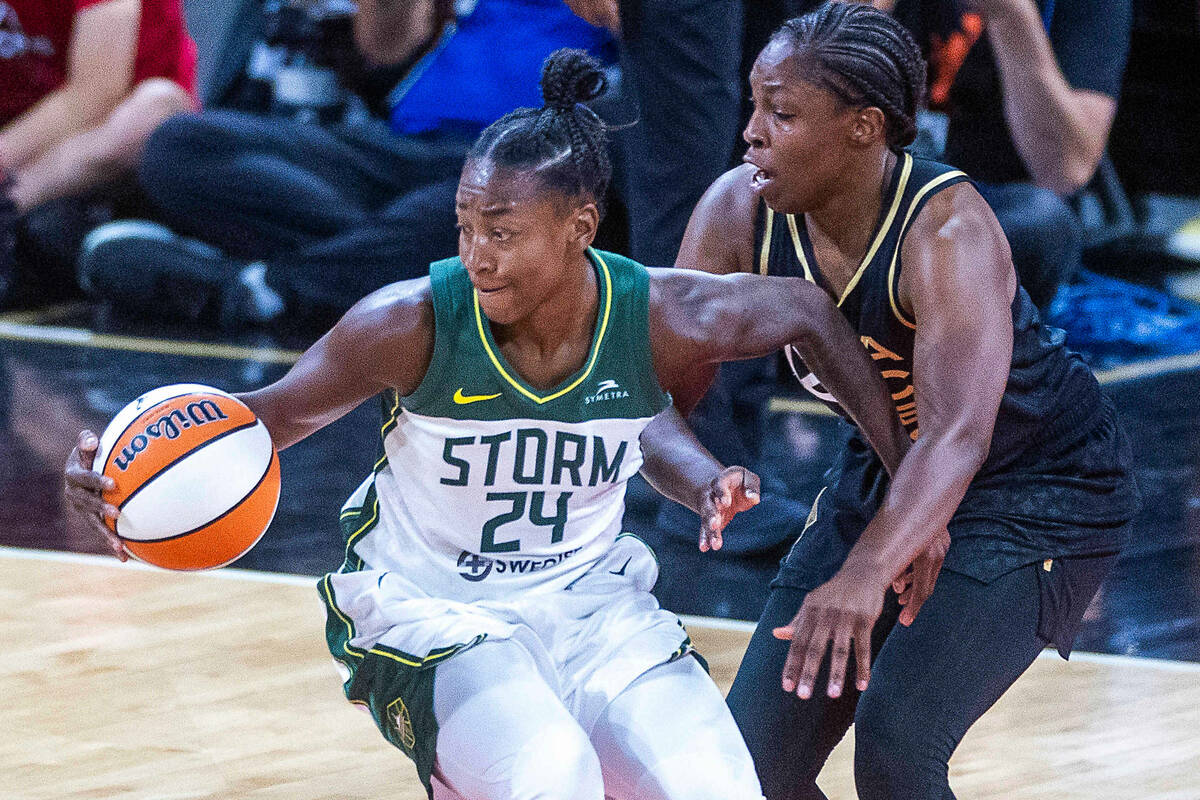 The No. 1-seeded Aces played three quarters of solid defense in Sunday’s 76-73 Game 1 loss to the No. 4 Seattle Storm. One quarter of poor defense cost them the game.

“We gave up 26 in the first quarter and then were basically digging out of a hole for the rest of the game,” Aces coach Becky Hammon said.

The Aces trailed 26-15 after the first quarter, as a bad start on defense combined with a rough shooting stint for Hammon’s squad. The 11-point deficit was too much for the Aces to overcome, despite outscoring the Storm 58-50 in the final three quarters.

Game 2 of the WNBA semifinals between the Aces and the Storm is scheduled for 7 p.m. Wednesday at Michelob Ultra Arena. Seattle currently leads the series 1-0. Teams leading a best-of-five playoff series 2-0 are 15-0 in WNBA history, making Game 2 a crucial one for the Aces.

During Game 1, Seattle shot 43.5 percent from the field and 50 percent from 3 during the first quarter. It exposed some flaws in the Aces’ defensive approach.

The Aces spent the first 10 minutes trying to trap Storm guards in the pick-and-roll. But Seattle’s All-Star backcourt of Jewell Loyd and Sue Bird — who broke the WNBA’s all-time playoff assist record Sunday after a 12-assist, zero-turnover performance — passed out of the trap well and found short-rollers like Breanna Stewart or Tina Charles.

Hammon’s adjustment for the second quarter was simple. “Took the trap off,” she said, “That’s it.”

The Aces’ trapping scheme was effective in their final two regular-season games against the Storm because it forced Seattle wing and 2022 All-Defensive second-teamer Gabby Williams to make shots.

However, Williams missed Game 1 with a concussion and Seattle announced she will still be out for Game 2 on Wednesday. Her replacement, Australian wing Stephanie Talbot, is a career 37.6 percent shooter from 3. Her spacing made it difficult for the Aces to play 4-on-3 behind the trap.

“You’re concerned about her,” Hammon said. “You don’t want to give her too many free looks at the basket.”

Instead of trapping, the Aces went to a switch-heavy scheme after the first quarter, but that presented some issues, too. In particular, it allowed the 6-foot-4 Stewart to hunt advantageous matchups with smaller players like 5-foot-8 guard Kelsey Plum and 6-foot wing Jackie Young. The 2018 WNBA MVP went 7 of 13 from the floor in the final three quarters and scored 18 points.

The Aces missed the versatile defensive presence of All-Star forward Dearica Hamby, still out with a right knee bone contusion, and will have to get creative on defense for Game 2.