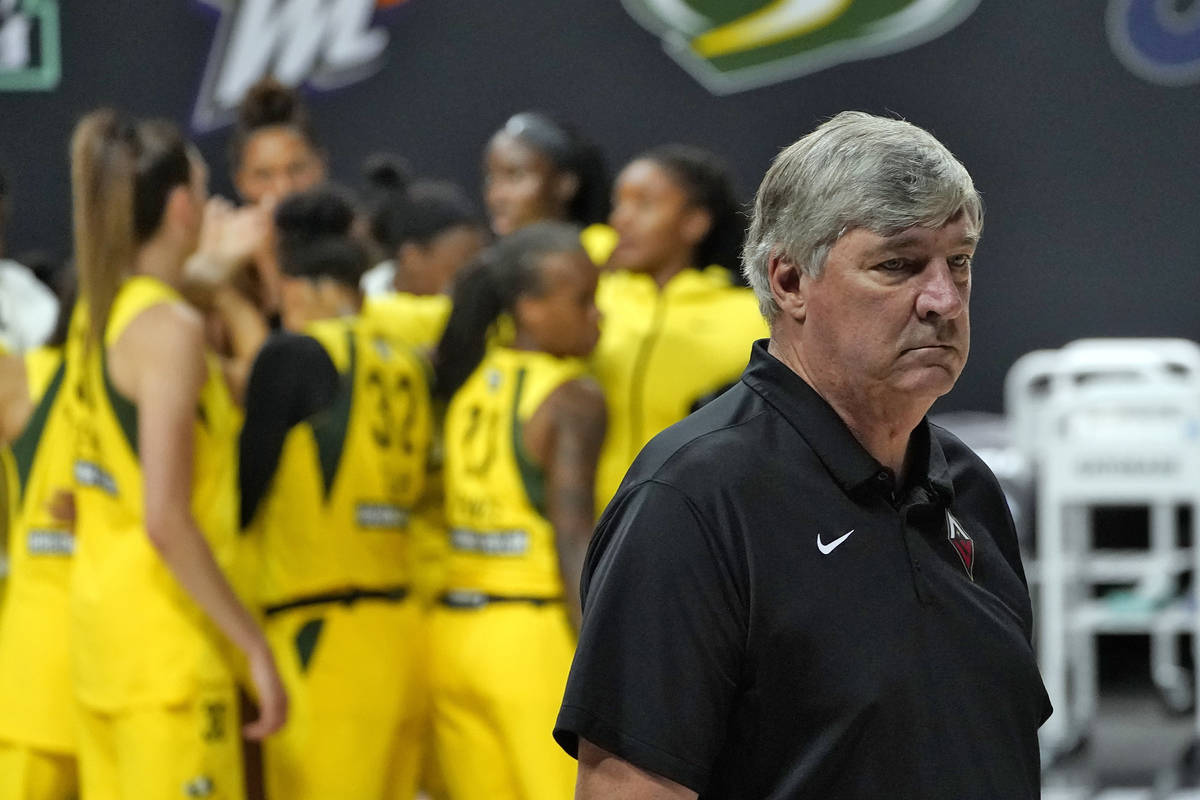 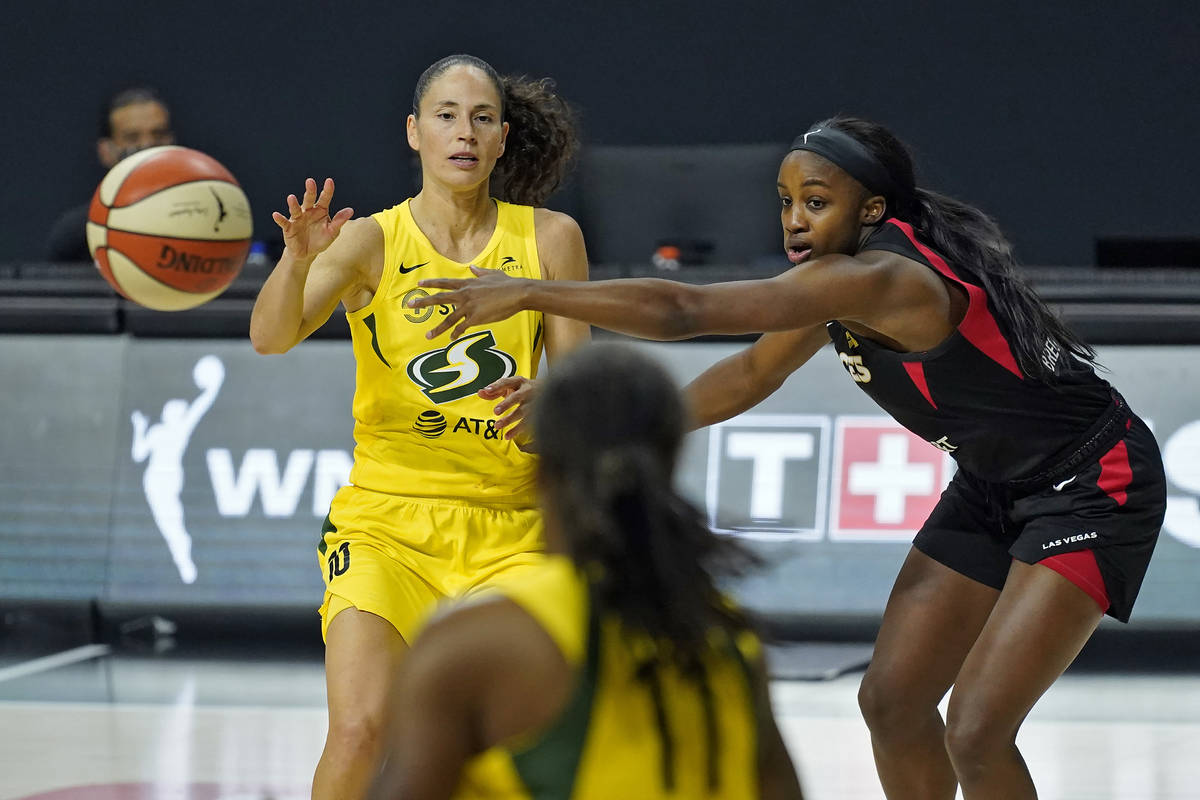 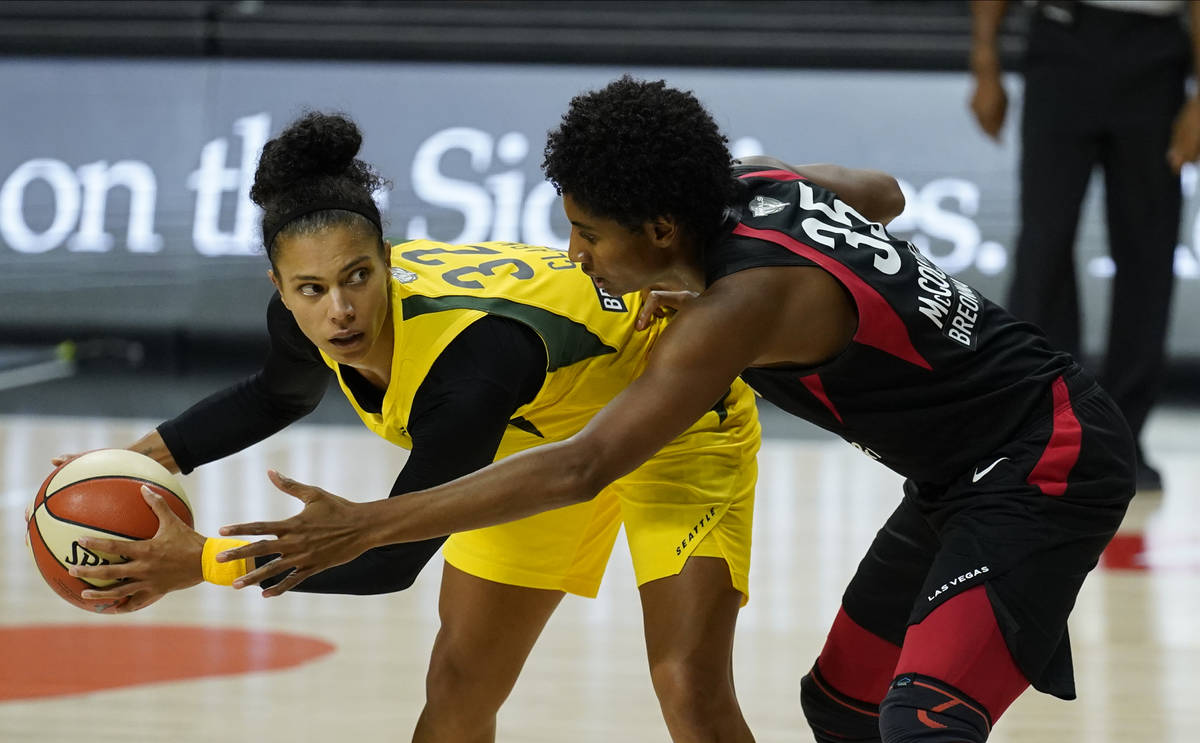 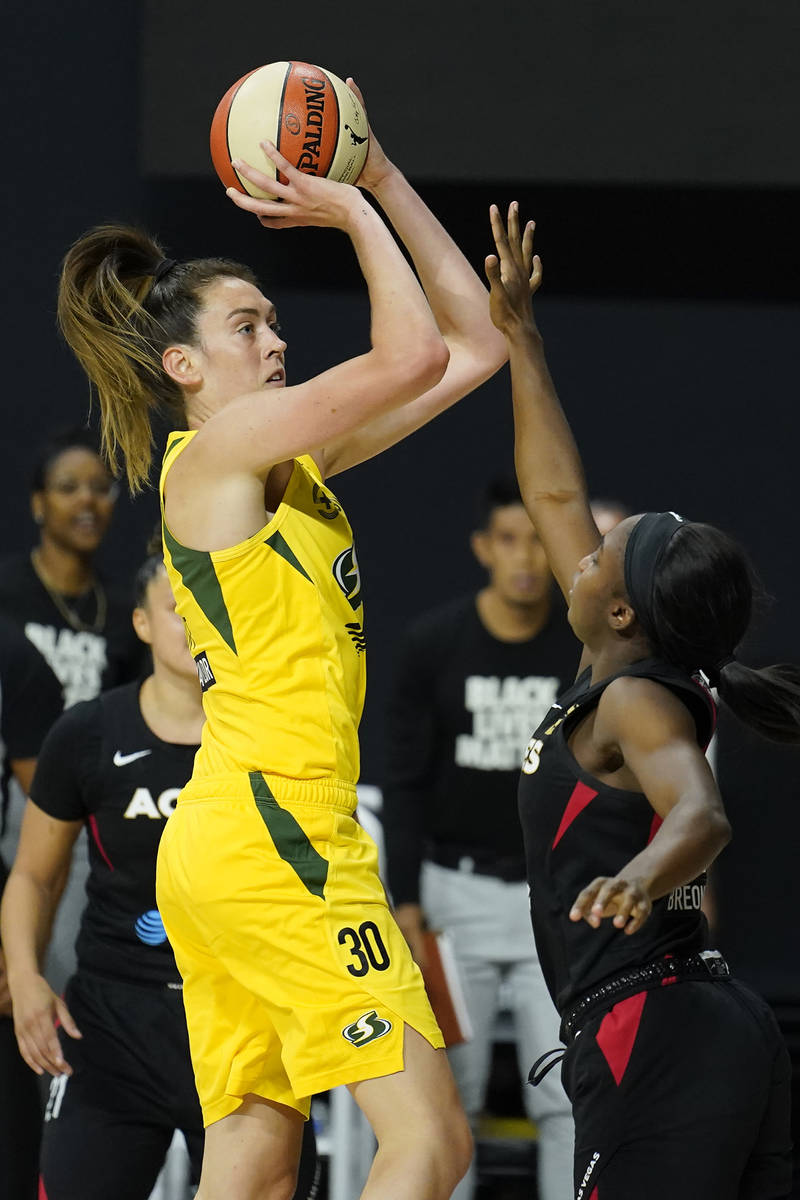 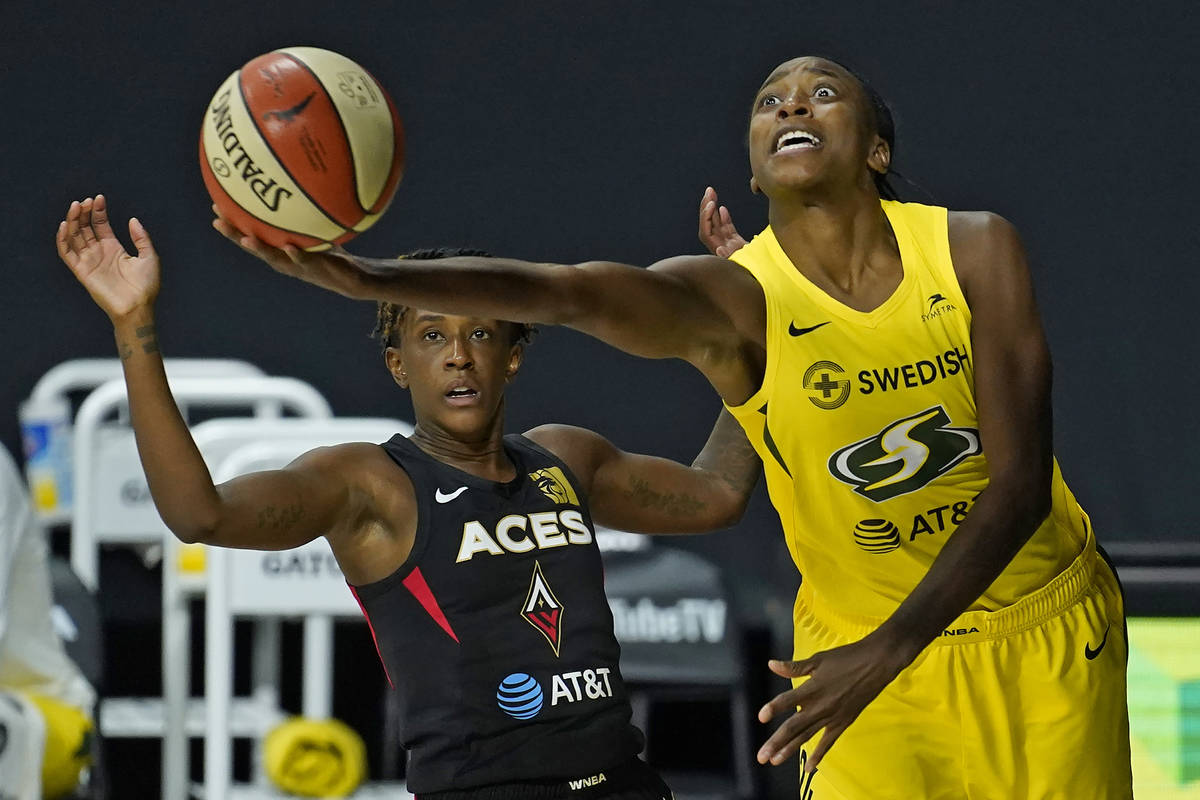 Seattle Storm guard Jewell Loyd (24) goes up for a shot after getting around Las Vegas Aces guard Danielle Robinson (3) during the second half of Game 1 of basketball's WNBA Finals Friday, Oct. 2, 2020, in Bradenton, Fla. (AP Photo/Chris O'Meara) 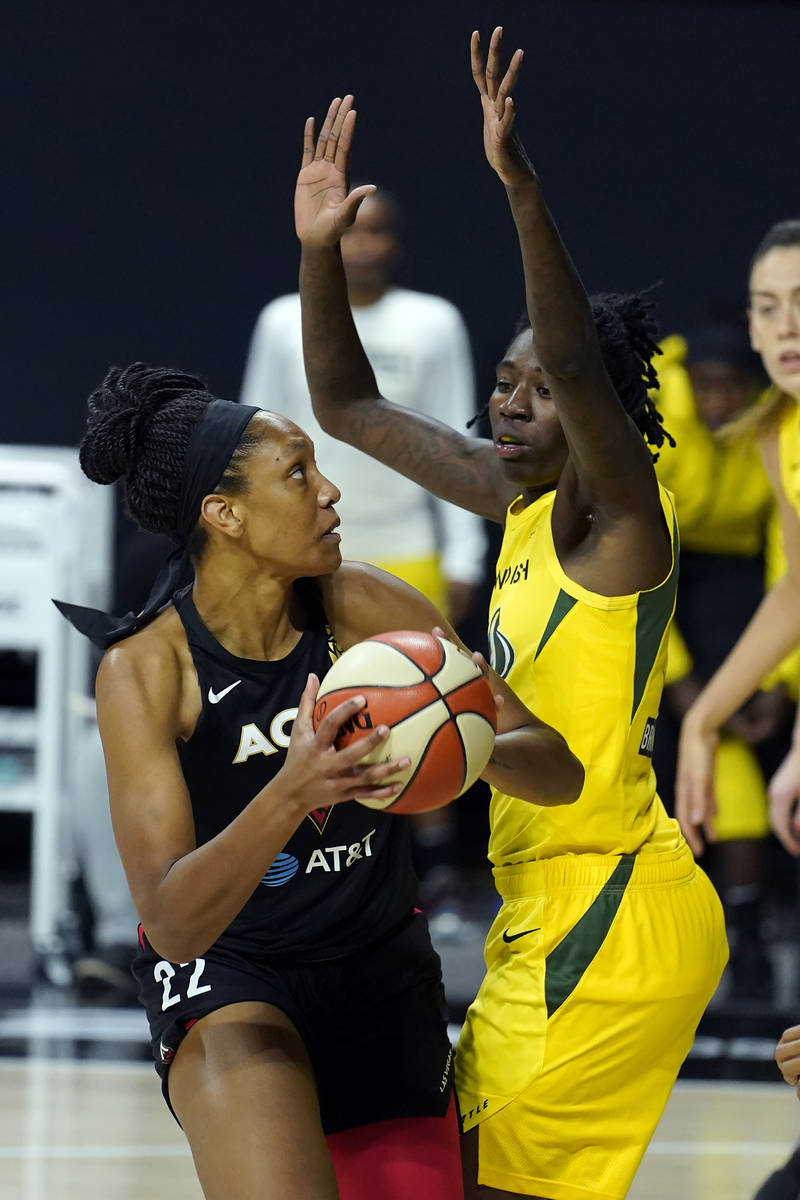 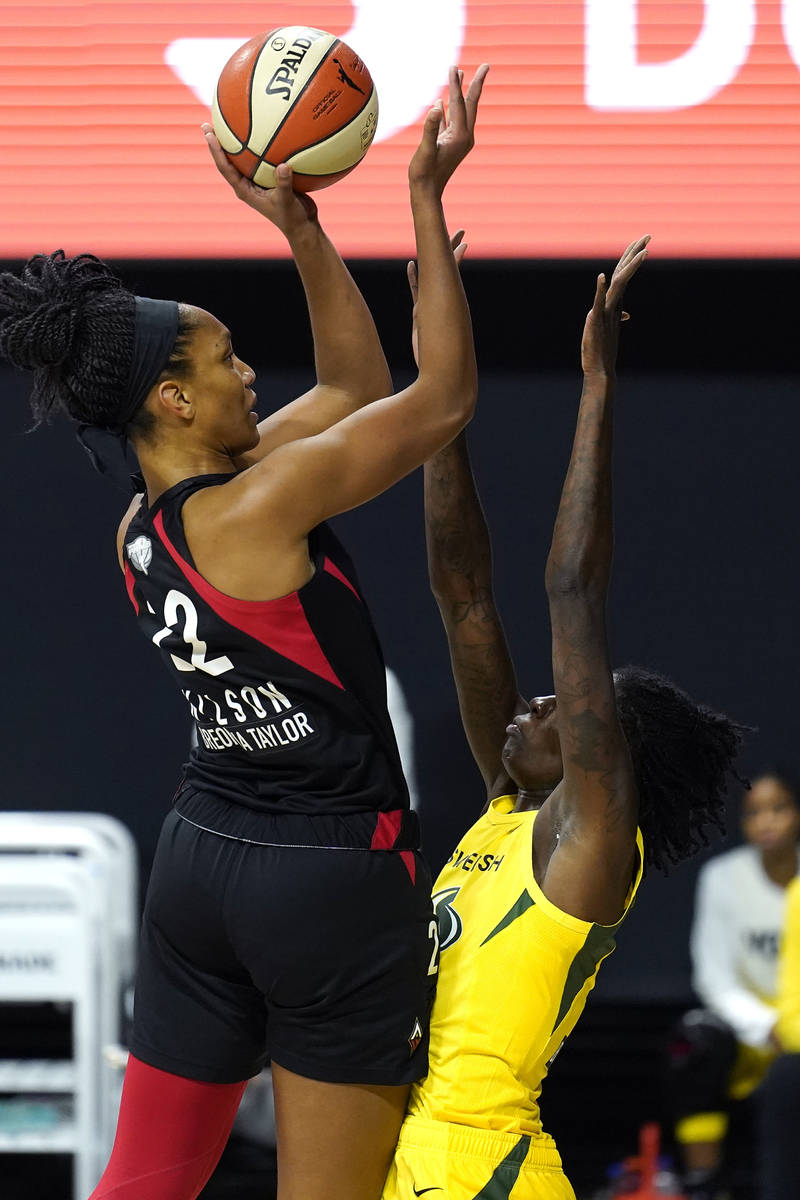 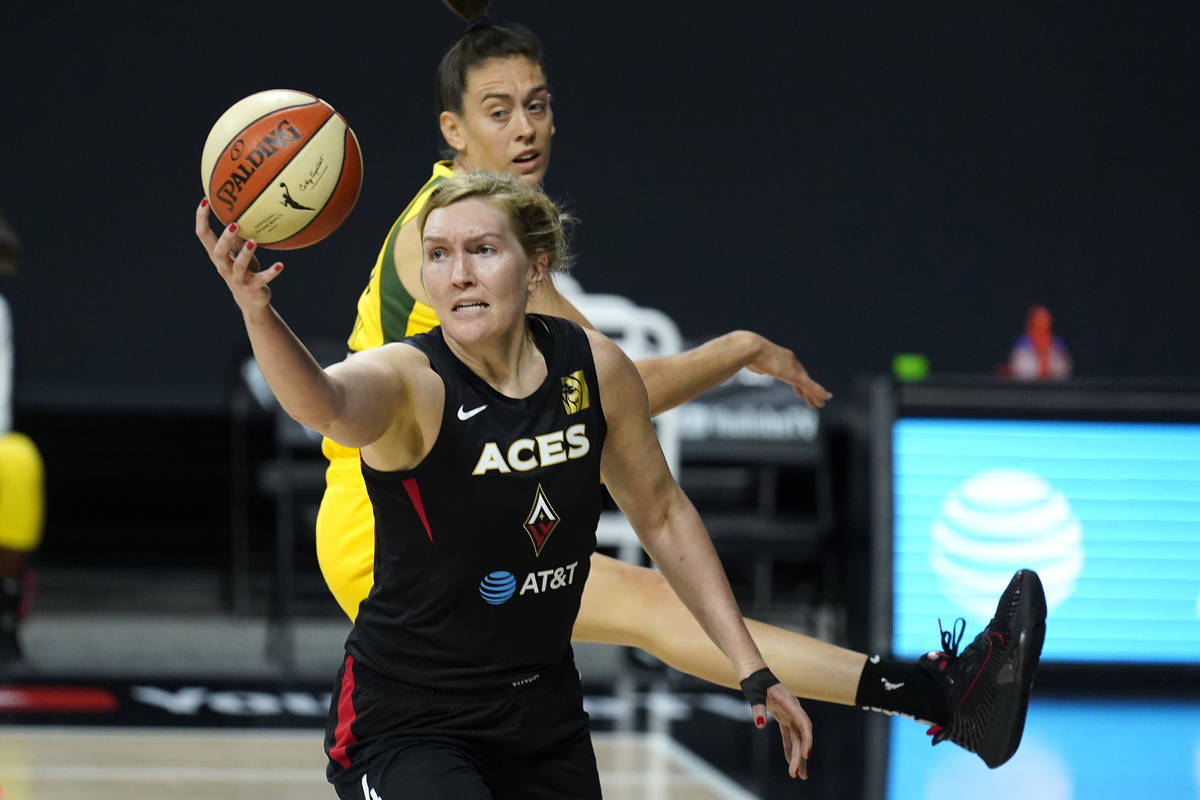 The Aces hope they learned some lessons after watching the game film of their 93-80 loss to the Seattle Storm on Friday in Game 1 of the WNBA Finals.

That’s especially true on the defensive end, where they saw Breanna Stewart getting too many wide-open shots on her way to a 37-point, 15-rebound night and Jewell Loyd getting behind them for easy transition baskets in a 28-point performance.

They also watched Sue Bird pick them apart and find open teammates on her way to a playoff record 16 assists as the Storm raised their playoff average to 90.5 points per game.

The Storm played faster than the Aces and outscored them 48-18 in the paint, mostly off those transition opportunities. Aces guard Danielle Robinson put it succinctly: “They beat us at our own game, transitionwise.”

The Aces will try to adjust in Game 2 at noon Sunday at IMG Academy in Bradenton, Florida.

It’s the first trip to the finals for many of the Aces, and coach Bill Laimbeer and some players acknowledged that was a factor in Game 1.

“We talked about how important every play, every possession is, and how this is the first time for a lot of them and they may not get back here again,” Laimbeer said. “Enjoy the moment but be collectively focused on the task at hand.”

The Aces’ problems on defense can be traced to their offense.

While they were 10-for-21 from 3-point range, more than double their averages during the regular season, they couldn’t find the mark from inside the arc.

They were 17-for-56 on 2-point tries, many of which were open looks they usually make. A’ja Wilson was 6-for-20, but she said Saturday she isn’t going to change anything because the shots came in the flow of the offense.

All told, the Aces shot 35.1 percent, a far cry from their regular-season number of 47.6 percent, while allowing the Storm to shoot 50 percent.

“The mere fact of us getting away from our system and our game plan is what annoys me the most about their points in the paint,” Wilson said. “The majority of their points were in transition, and when you see they’re uncontested, of course they’re going to make those shots. But it’s a lot of things we could fix.”

The Aces dominated the offensive boards 11-3 — including seven from Carolyn Swords, whose six in the first half tied a finals record — but only outscored the Storm on second chances 7-6.

“Offensive rebounds are there against them,” Laimbeer said. “Two things happened last night. One is their defense rotates a lot, so it leaves the offensive boards open for some opportunities. But the second thing is we missed so many shots that it creates more opportunities for second shots. By nature, we’re going to get more.”

The Aces should be over their first-game jitters, and few coaches rebound better than Laimbeer. He’s 9-1 in the playoffs after his team loses by 10 or more.

That includes Game 2 of the semifinals, when the Aces defeated the Connecticut Sun 83-75 after losing Game 1 87-62.

“Even though you lose one game, so what?” Laimbeer said. “You’re disappointed for the moment, but you have to come back the next day more determined. You have to create a mindset of they got one, now it’s our turn.”