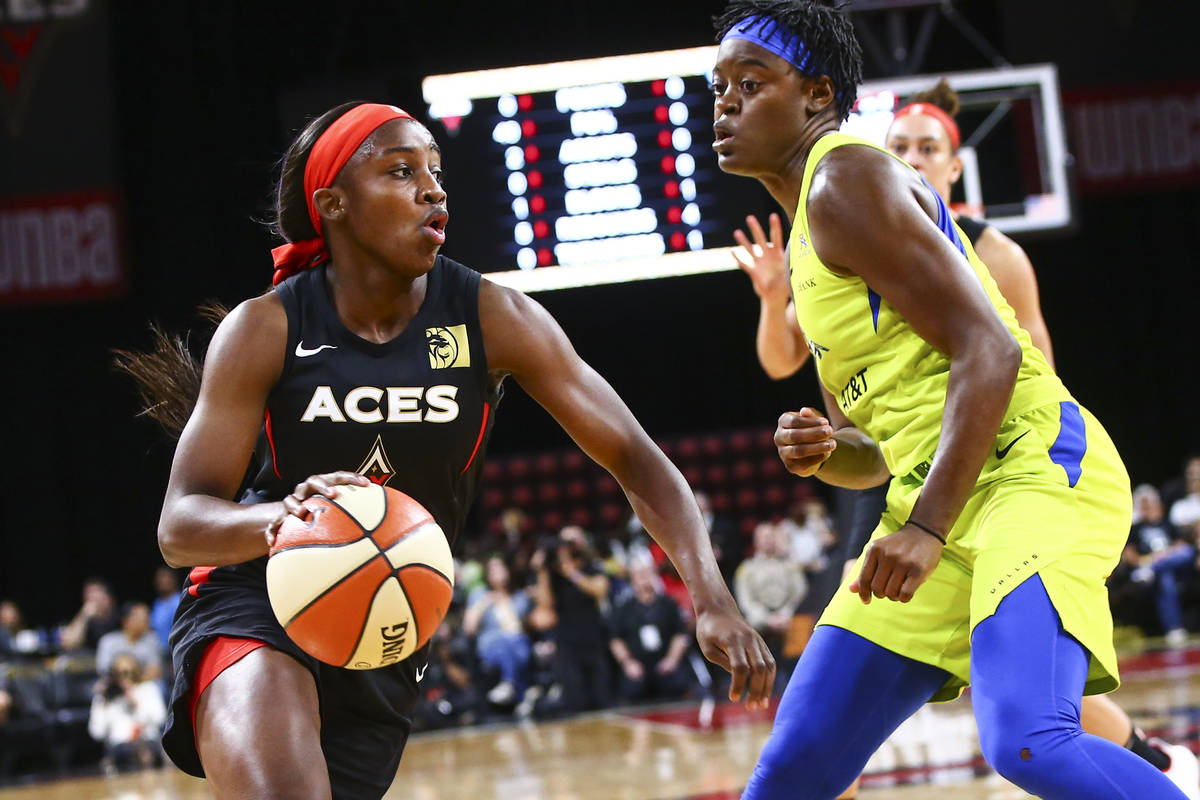 Las Vegas Aces' Jackie Young (0) drives to the basket against Dallas Wings' Kaela Davis (3) during the first half of a WNBA basketball game at the Mandalay Bay Events Center in Las Vegas on Tuesday, July 30, 2019. (Chase Stevens/Las Vegas Review-Journal) @csstevensphoto

“She played well last year, but it wasn’t statistically what you’d expect from a No. 1 pick,” he said.

That was somewhat to be expected. Rookies always have a learning curve when they get into the WNBA. Young came out of Notre Dame after her junior season and was asked to not only get accustomed to playing professional basketball, but to do so as a point guard, a position she’d never played full-time.

She was also joining a team that included the two previous No. 1 picks in forward A’ja Wilson (2018) and guard Kelsey Plum (2017). The Aces had also added Liz Cambage, who was coming off a season with Dallas in which she was second in MVP voting.

With that kind of star power all around her, Young found her niche in setting up her teammates more than looking for her shot.

“It was very obvious I played a little bit timid, a little bit hesitant,” Young said. “I wasn’t taking open shots. I was really just not being who I was, not living up to my potential. It’s just having the confidence in myself to take open shots and to help lead the team. That comes with a year under my belt.”

Even playing out of character, Young still managed a solid rookie campaign. She was eighth in the WNBA with 153 assists and proved to be a strong and versatile defender.

But she struggled to put the ball in the basket, making only 32.2 percent of her shots from the floor and averaging 6.6 points per game.

That wasn’t normal for Young, who is the all-time leading scorer in Indiana high school basketball history — boys or girls. As a junior at Notre Dame, she scored 14.7 points per game despite sharing the ball with the rest of a star-studded starting five that is now playing in the WNBA.

But Laimbeer sees a different Young in this year’s training camp in the bubble at IMG Academy in Bradenton, Florida.

“I think the burden of being the No. 1 pick in the draft and coming into a quality team like we had last year now is gone,” Laimbeer said. “She didn’t know what to expect coming in, both what was expected of her and what she could do in this league after coming out as a junior. She has a good handle on what she can do now and what’s expected of her. I expect a big breakout from her.”

The Aces will need it.

Plum tore an Achilles tendon in June and will be out for the season, and Cambage won’t join the team in the bubble in Bradenton, Florida, because of medical concerns. Young has the physical attributes to help make up for those losses as a strong 6-footer who is quick and can jump.

Young’s teammates have encouraged her to be more aggressive — more selfish, even — when it comes to taking her shot.

“Jackie is a perfectionist. She wants to do everything right,” Wilson said. “I guess that’s that Notre Dame in her. She just really wants everything to be right all the time. You’re going to mess up, but the biggest thing is how you recover. Everything’s not going to be crisp and clean. It might be a little muddy in the game but know and trust your instincts.”

Wilson and Young are close friends, despite their divergent personalities. While Wilson is boisterous and outgoing, Young is more subdued and introspective. But Wilson said once Young opens up, “she’s a mess.”

“Jackie is absolutely the little sister I absolutely did not want,” Wilson said with a chuckle. “I absolutely hate her music taste. She likes, like, Luke Combs,” Wilson said. “Nothing against him, but I’m like, Jackie, we need to get pumped for the game. I’m not going to listen to country music right now.”

For her part, Young insists she listens to several different kinds of music and that Wilson needs to “open up and let me give her some good music.”

While that argument might never end, Young hopes there is no debate about her ability after this season.

“Her growth from last year to this year, I’m like, ‘Wow,’” Wilson said. “Later in her career she’s going to be one of the best at what she does because she’s so pinpoint on everything. I love having her on this team and watching her grow.”