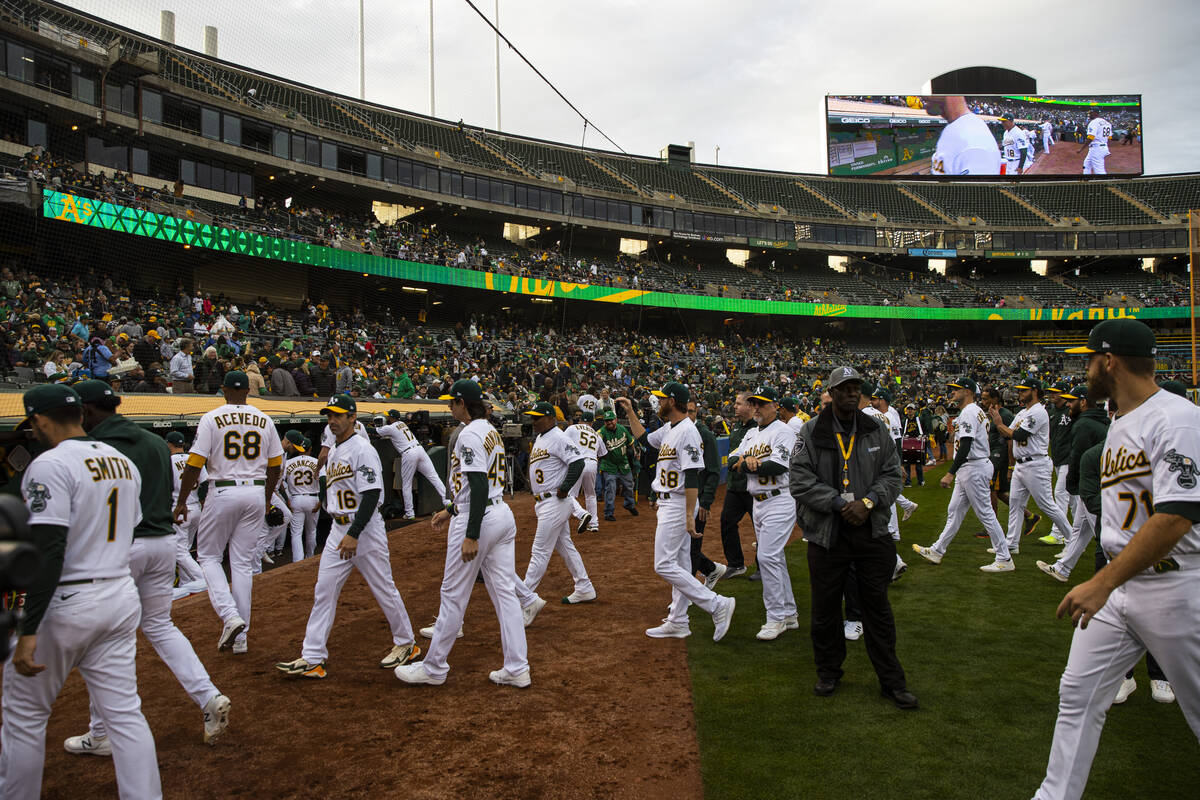 Oakland Athletics players head to the dugout before the start of the opening night game against the Baltimore Orioles on Monday, April 18, 2022, at Oakland Coliseum in Oakland, Calif. (Chase Stevens/Las Vegas Review-Journal) @csstevensphoto

The A’s have been researching the Las Vegas Valley for more than a year now tied to a potential relocation to the area. The team began that search after MLB commissioner Rob Manfred gave the green light to begin looking outside of Oakland, California, for a potential landing spot for a new ballpark for the organization.

The only market the A’s have looked at is Las Vegas, where the team is down to choosing between two potential ballpark sites, both located around the resort corridor. With that, Manfred has made it clear that the league is impressed with what they’ve seen in the desert.

“We like Las Vegas as a market,” Manfred said to reporters last week after the MLB owners meetings in New York.

Manfred noted that he has pushed for a resolution with not only the A’s ballpark search but also the Tampa Bay Rays.

The A’s lease at RingCentral Coliseum expires in 2024, and the Rays’ lease at Tropicana Field in St. Petersburg, Florida, ends in 2027. Both markets are among the league’s worst attendance-wise and, with the process of building a new ballpark taking several years, Manfred appears to want answers in the near term.

“We need a solution in both those markets, and the time has come for that solution,” Manfred said.

A’s President Dave Kaval was in New York last week for the team owners meetings. He said it’s no secret that MLB officials are very interested in what Las Vegas has to offer as far as its reputation as a professional sports city.

“I think you can see from the commissioner’s comments that they’re very positive on Vegas as a market,” Kaval told the Review-Journal last week.

“I think that’s a big change when you look back 10 years. It just shows the maturation of the local fan base, the success of the other teams and really the importance for all these major leagues sports to be in the entertainment capital of the world.”

Rays executives did not respond to a request for comment.

Aside from MLB poking around Las Vegas, Major League Soccer entered into an exclusive negotiating agreement with billionaires Wes Edens and Naseef Sawiris to land a potential expansion team in Southern Nevada.

The NBA is also no stranger to Las Vegas rumors, with speculation heating up as of late. LeBron James and boxer Floyd Mayweather have expressed interest in landing a NBA team in Las Vegas, and there are plans for a $1 billion, NBA-ready arena in the works.

“It’s very exciting,” Kaval said of Las Vegas. “It actually has benefits beyond just the teams that are there.”

Those benefits include the Strip and the dining, shopping, gaming and nightlife that Las Vegas has to offer.

Those benefits would be especially beneficial when it comes to baseball and its 81 home games per season.

“Especially with baseball changing its schedule and going to more of a balanced schedule over time, where you basically play every team in the league,” Kaval said. “That is what I think is a great setup for Las Vegas because you could have so many of these visiting fan bases fly in, and obviously that would increase the tourism and people in the hotels and really just create a great dynamic. So, I think there are a lot of positive things in how baseball plays out (in Las Vegas), and I think people saw that in the meetings.”