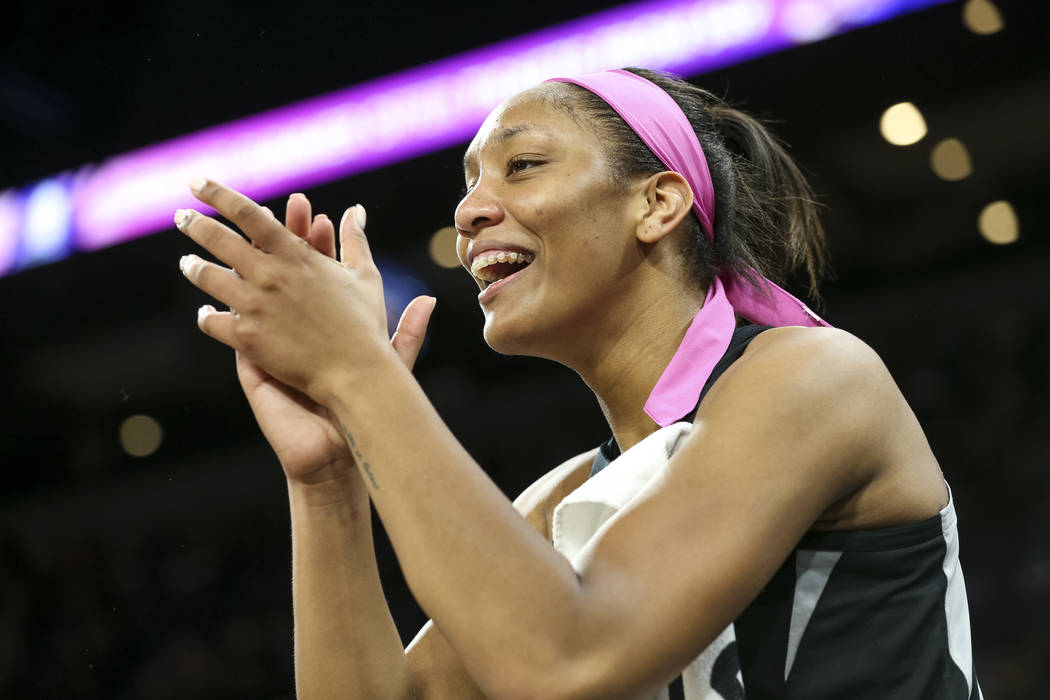 Las Vegas Aces center A'ja Wilson (22) reacts to a play by Aces guard Moriah Jefferson (4) during the first half of a WNBA basketball game against the Indiana Fever at the Mandalay Bay Events Center on Saturday, Aug. 11, 2018. Richard Brian Las Vegas Review-Journal @vegasphotograph

Another day, another accolade for A’ja Wilson.

The Aces’ prized rookie was the unanimous choice to win the Associated Press WNBA Rookie of the Year award, the AP announced Tuesday. The award was chosen by a 14-member media panel.

The WNBA has separate awards and Wilson is considered the favorite to win the league’s top rookie honor when that announcement is made at a later date.

Wilson was the top pick in April’s draft and led all rookies — and the Aces — with averages of 20.7 points, 8 rebounds and 1.6 blocks to help the Aces to 14 wins this season. She scored in double figures in all 33 games to surpass the Los Angeles Sparks’ Candace Parker for most consecutive double figure scoring games to start a career. 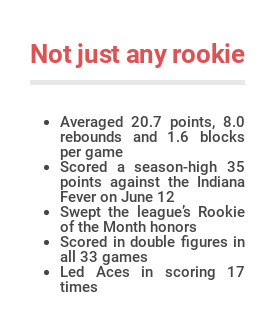 Houston Comets star Cynthia Cooper has the record with 92.

Wilson’s 682 points are the second-most by a rookie in league history behind Minnesota’s Seimone Augustus, who scored 744 points in 2006. The South Carolina native also led all rookies in minutes and free throw attempts.

Wilson called it a “great honor” Tuesday, and said she plans to increase size and strength to her 6-foot-4-inch frame for next season.

“I still have the body of a college player, and I really don’t like that,” said Wilson, who will be at USA Basketball’s team training camp in South Carolina next month. “It’s tough coming straight from college, especially with the season we had, it was so condensed that we really didn’t have time. … I really want to gain more muscle.”

Seattle’s Breanna Stewart earned Player of the Year honors. She averaged 21.8 points, 8.4 rebounds and shot 52.9 percent from the field to help the Storm earn a bye until the semifinals of the playoffs. She received 12 of the 14 votes with Dallas’ Liz Cambage earning the other two.

Atlanta’s Nicki Collen was chosen as the AP’s Coach of the Year, receiving 13 of the 14 votes. In her first season as a head coach, she guided the Dream to a second place finish in the standings despite a multitude of injuries, including a season-ending one for star wing Angel McCoughtry. The team finished the season with seven wins in its final eight games.