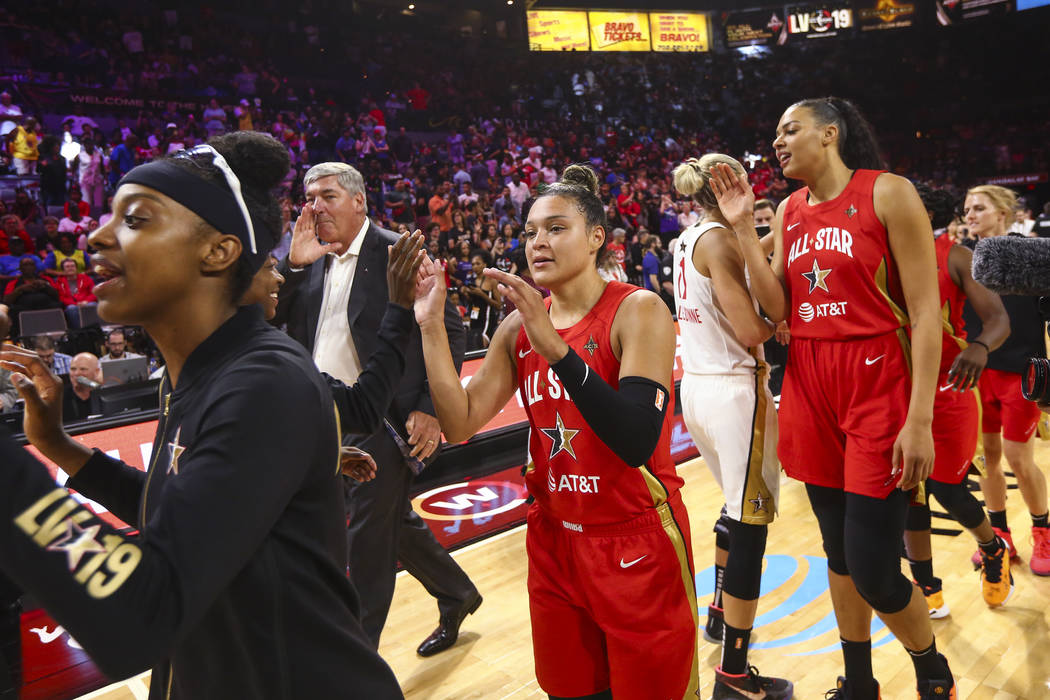 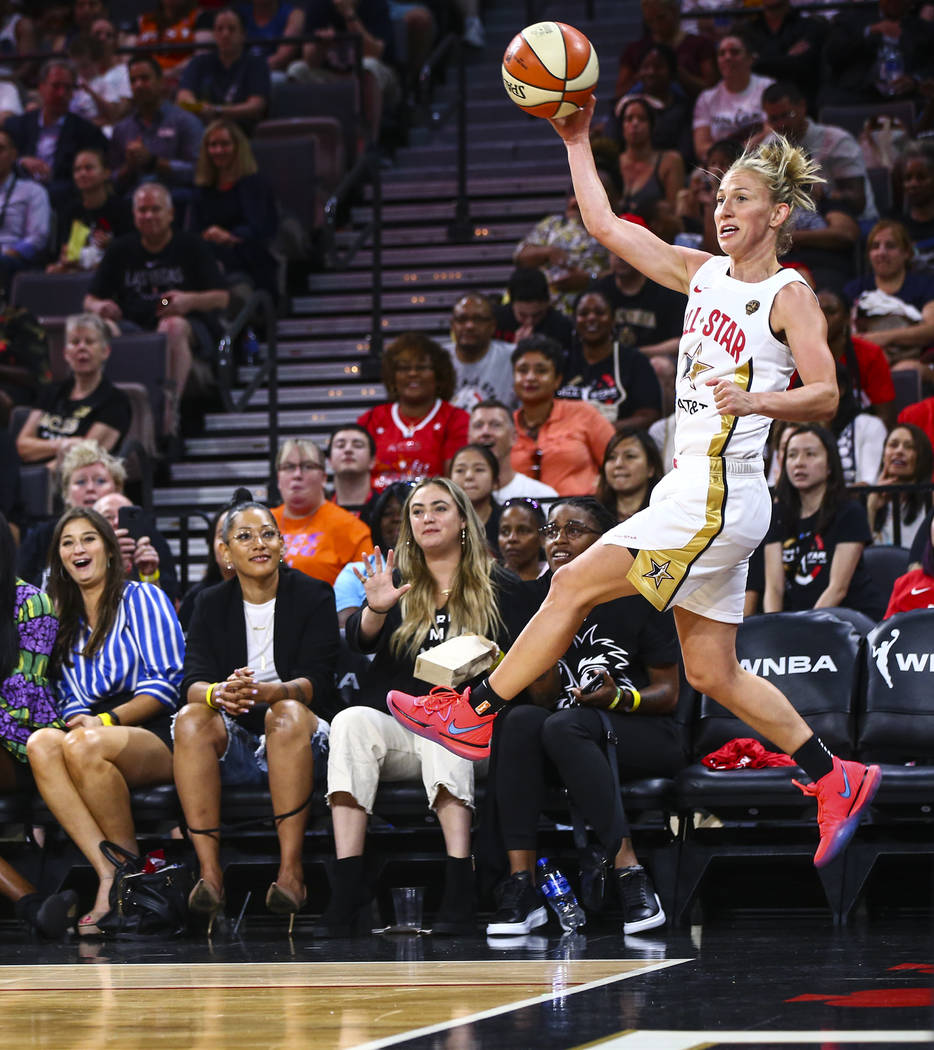 Chicago Sky's Courtney Vandersloot jumps to keep the ball in during the second half of the WNBA All-Star Game at the Mandalay Bay Events Center in Las Vegas on Saturday, July 27, 2019. (Chase Stevens/Las Vegas Review-Journal) @csstevensphoto 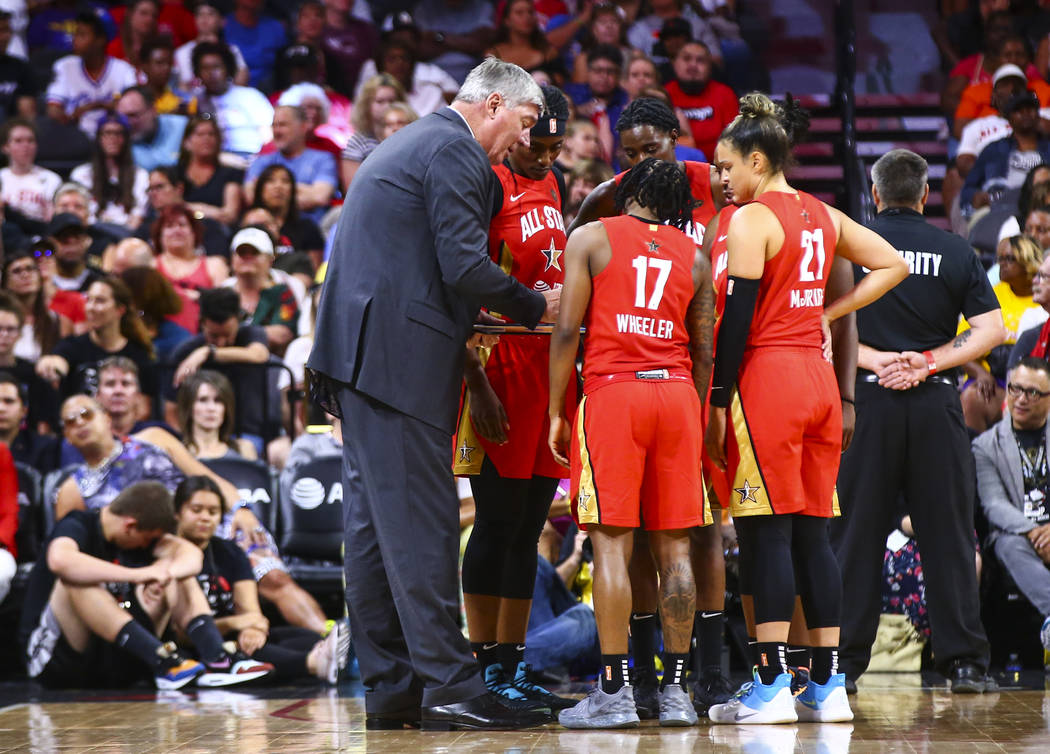 Coach Bill Laimbeer talks with his team during the second half of the WNBA All-Star Game at the Mandalay Bay Events Center in Las Vegas on Saturday, July 27, 2019. (Chase Stevens/Las Vegas Review-Journal) @csstevensphoto

Courtney Vandersloot’s face lit up as she was tagged in by Elena Delle Donne before excitedly running out on the floor and joining her teammates in the middle of a possession as if she was getting away with something.

It was the first live-ball substitution of Saturday’s WNBA All-Star Game at Mandalay Bay Events Center under an experimental rule implemented for the exhibition.

“I was pretty excited about that,” said Vandersloot, a guard for the Chicago Sky. “I didn’t really know how to get her attention to tell her I was coming in for her. I was just waving and jumping up and down.

“I feel like it’s a little weird, but it was fun. I think it should be an All-Star thing. I don’t know if they’re thinking this will be a real game thing, but I hope not. I was excited to be the first one, though.”

Under the rule, each team was allowed one live ball substitution per quarter that only could be used on offense and couldn’t involve the player in possession of the ball.

The Aces’ Bill Laimbeer, who coached Team Wilson to a 129-126 victory over Team Delle Donne, said he doesn’t see any future for the experimental rule.

“I don’t see how it would work because you can’t get somebody off the floor fast enough some times,” he said. “I don’t know about that one at all. If it was a real game, I don’t think live subbing would ever work.”

Laimbeer was far more receptive to the other rule that the WNBA experimented with Saturday, but the shortened shot clock — from 24 to 20 seconds — didn’t necessarily come into play in a game in which defensive intensity was nonexistent.

“The 20-second shot clock I understand,” Laimbeer said. “That could be a possibility for the future to speed the game up. Going from 30 to 24 was like pulling teeth for some of the franchises, but I think overall 20 seconds isn’t too bad. These players are really good and move the ball really fast, so I think it’s possible.”

Vandersloot understands the premise of both ideas is to find ways to generate more action and have less down time, but she thinks there are better ways.

“Tell them to stop calling so many fouls,” she said.

USA Basketball used WNBA All-Star weekend to announce an expanded training program for the women’s national team’s preparations to challenge for a seventh straight gold medal at the 2020 Olympics in Tokyo.

Eight WNBA stars have committed to five training segments from November to April and will receive additional compensation to forgo international competition and use the time to prepare for the Olympics.

Other players will be added to the pool as the WNBA season wraps up.

The training program will include competing in the 2019 FIBA AmeriCup and exhibition games against top college teams.

— Team Wilson set a record for points in a half with 77 in the first half, as well as the highest-scoring quarter with 39 in the first.