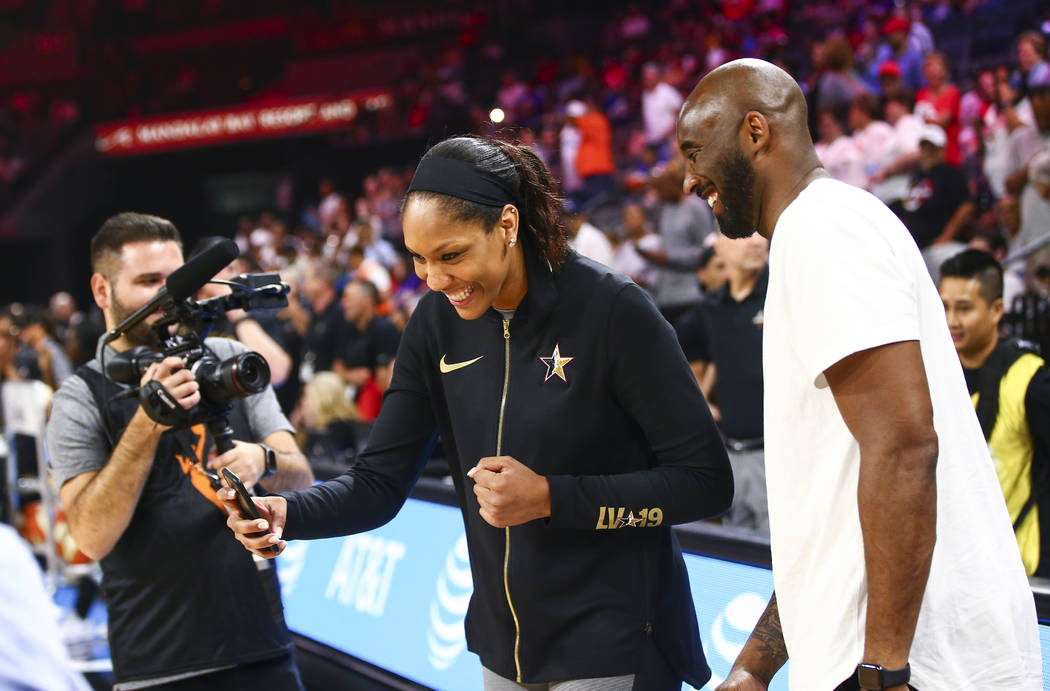 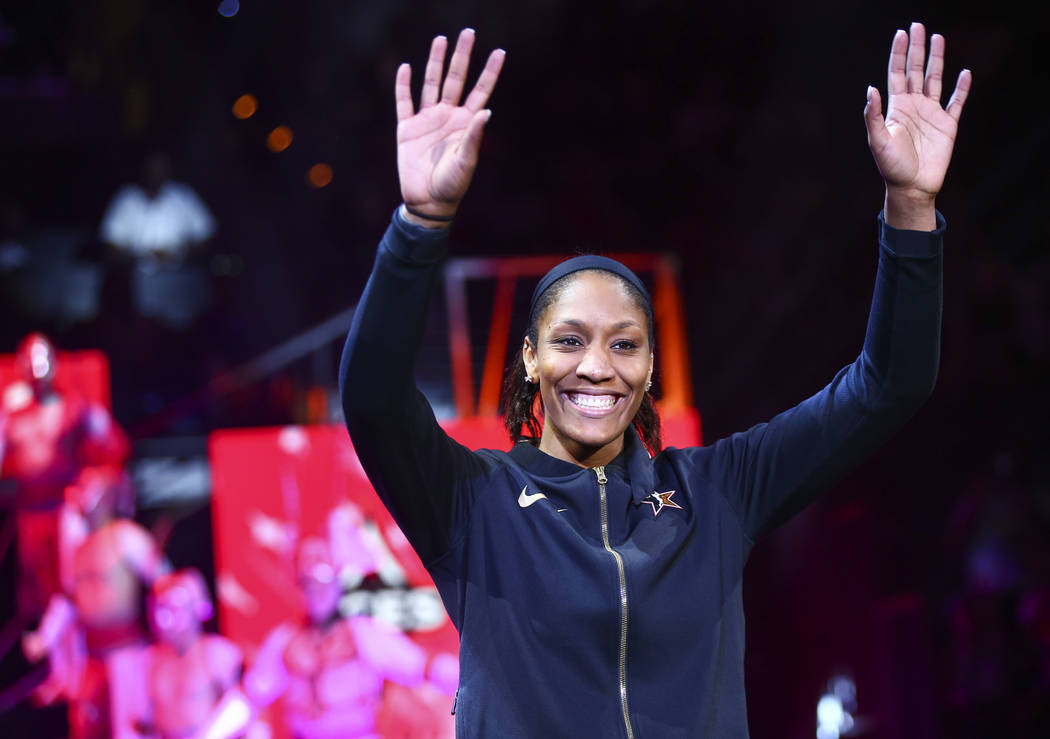 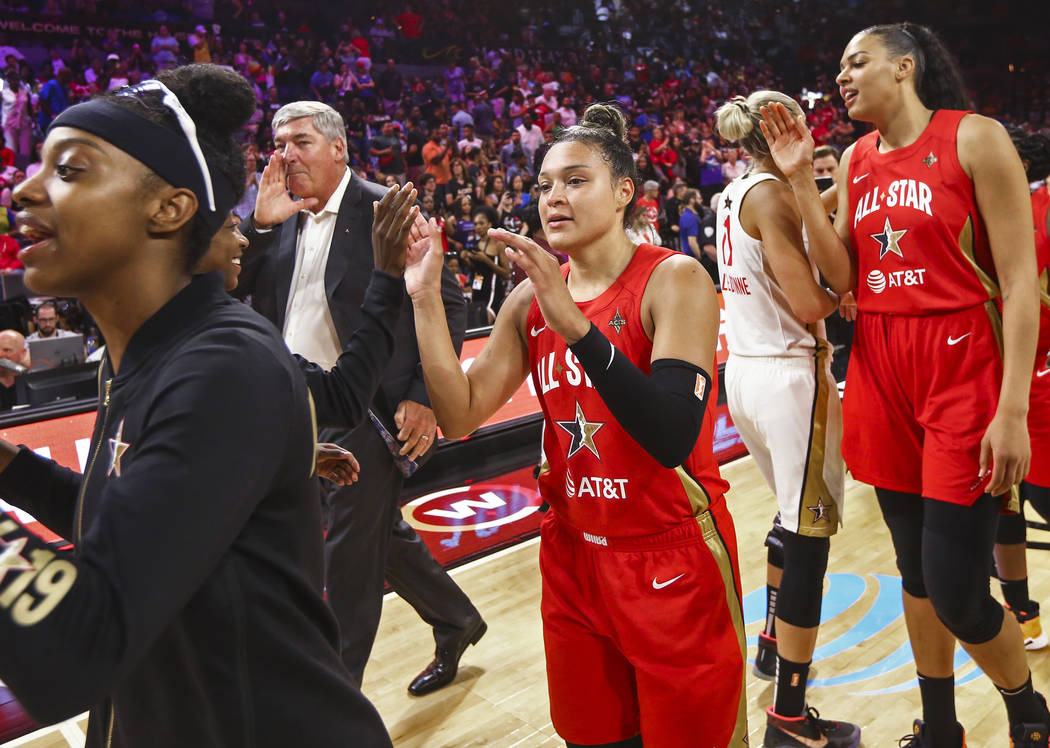 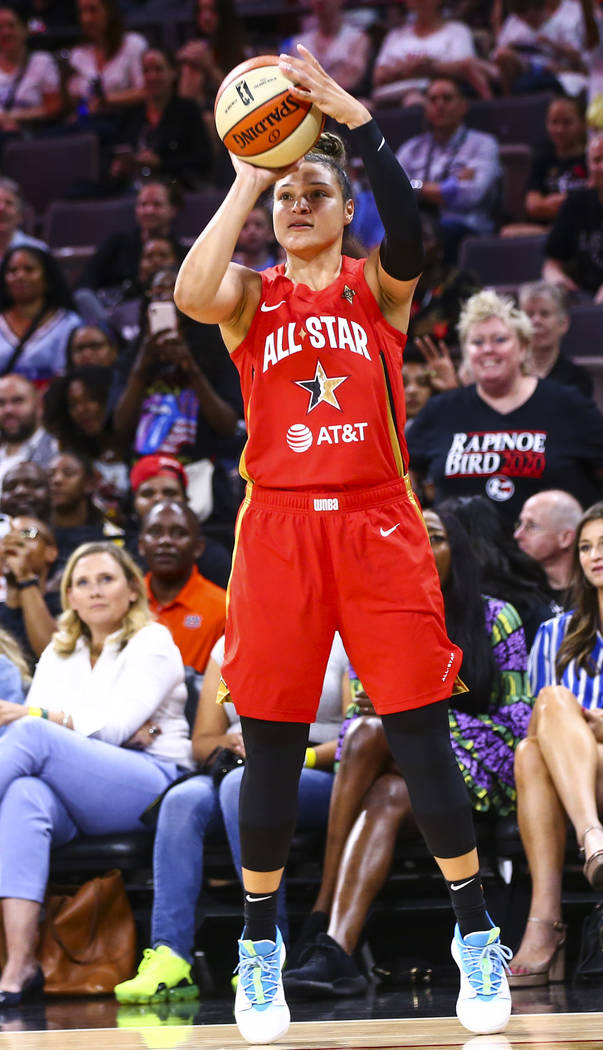 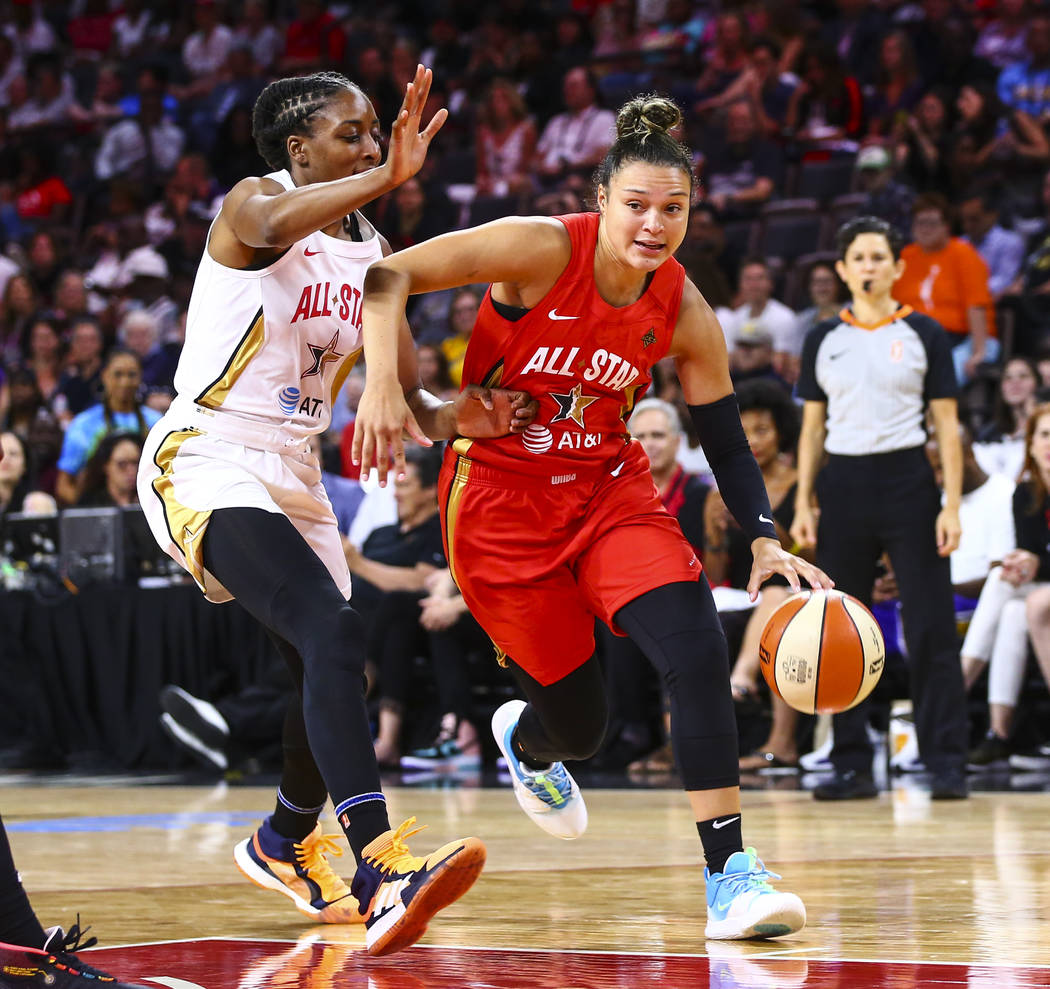 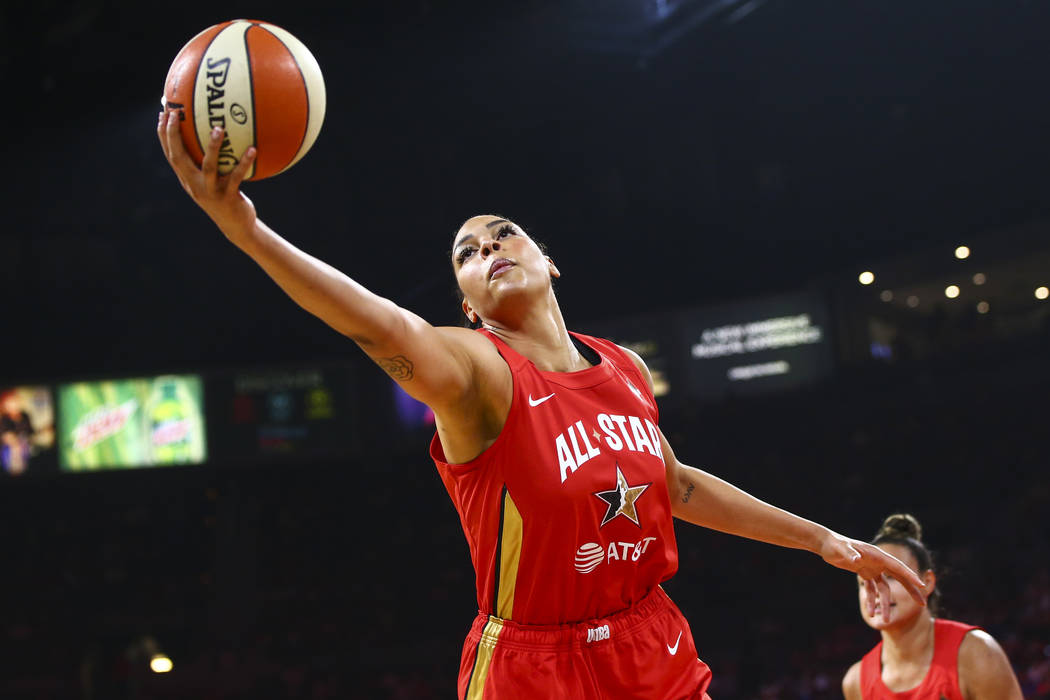 Las Vegas Aces' Liz Cambage gets a rebound during the first half of the WNBA All-Star Game at the Mandalay Bay Events Center in Las Vegas on Saturday, July 27, 2019. (Chase Stevens/Las Vegas Review-Journal) @csstevensphoto 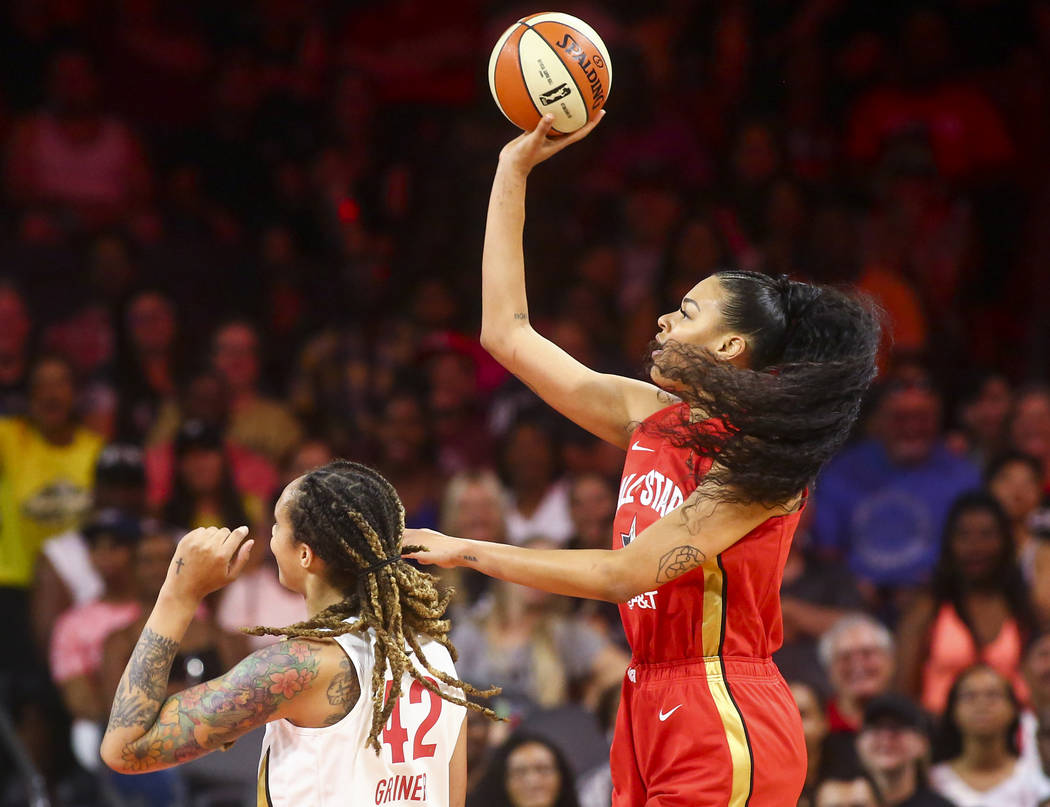 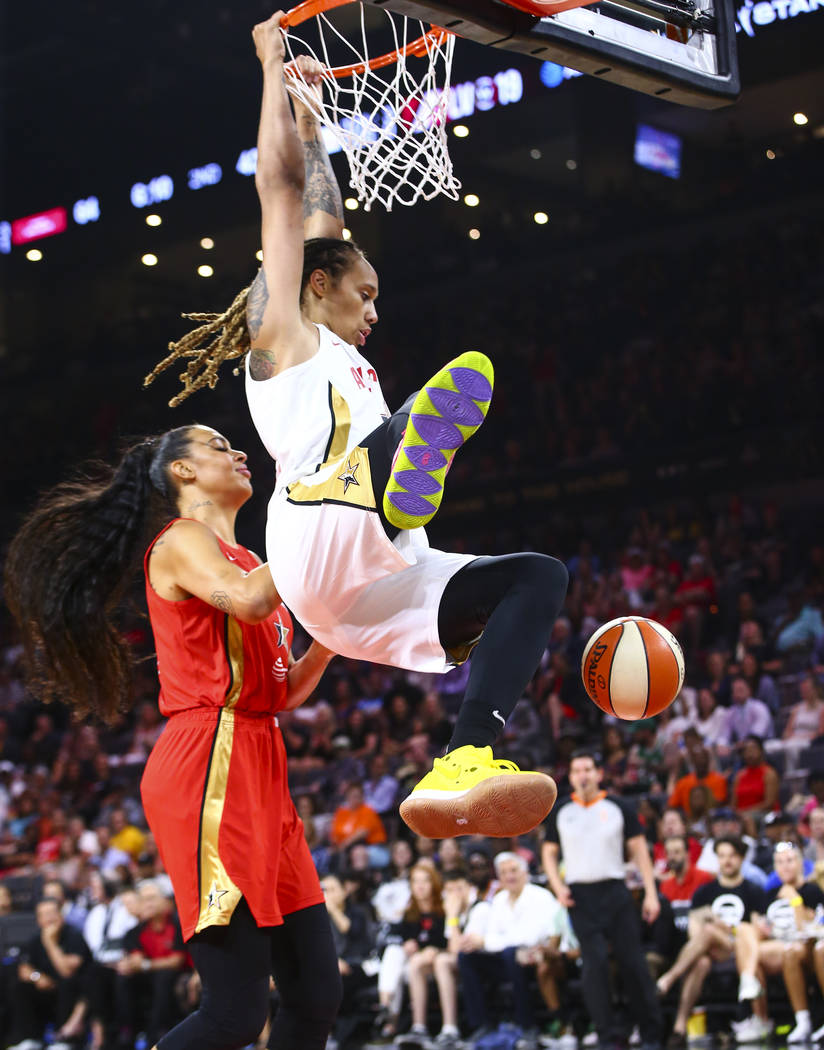 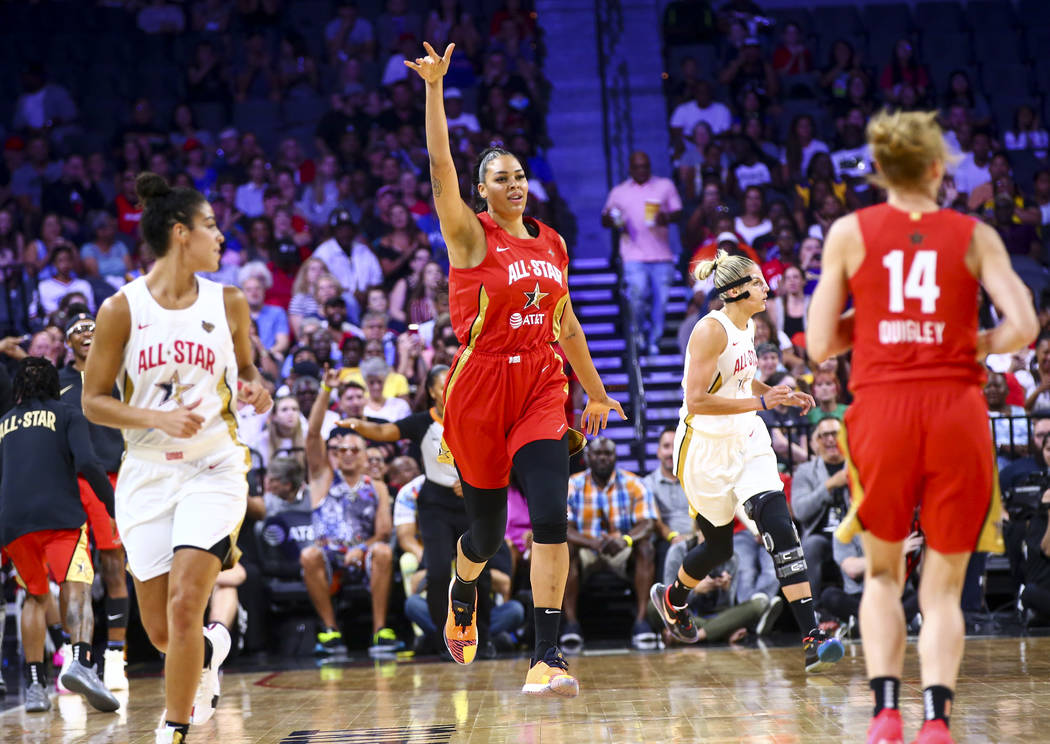 Aces forward and All-Star captain A’ja Wilson could hardly talk Saturday, her voice hoarse and raspy from the excitement of the weekend. But she cheered and cheered as she captained her first WNBA All-Star Game victory.

All the while, her teammates stood beside her.

McBride finished with 13 points in 24 minutes, and Cambage had eight points and six rebounds in 22 minutes.

“To get my first win as a captain is super special,” said Wilson, flanked by McBride at a postgame news conference. “I’m glad I drafted them correctly. … It was just fun. It was great energy around the town.”

Wilson finished second in All-Star voting to earn captain honors opposite Elena Delle Donne, but injured her ankle last week against the Seattle Storm and missed the game. But the injury didn’t dampen her gregarious personality, and she served admirably as an ambassador for the league throughout the weekend.

She also thanked the crowd during a short speech before the game, her raspy voice on full display for the cheering fans.

Her teammates handled the rest en route to the victory.

McBride, who finished second in the 3-point contest Friday, made three 3-pointers and roused the crowd with her crisp ballhandling at the top of the key. Cambage, a 6-foot-8-inch center, played a little point guard and initiated several possessions by bringing the ball up the floor and shooting the perimeter shots typically reserved for guards.

“We love playing here — along with Liz and Bill. The (fans and the city) embraced us since Day One,” McBride said. “The fan base has been amazing. The community has embraced us and loved us no matter what happened.”

The three players were eager to flaunt their franchise for the rest of the WNBA and emphasized how special they believe it is.

The league finally found out firsthand, much to Wilson’s delight.

“The vibe was electric. It was positive. I think we should have it here every year,” she said. “We’re all coming together and watching the game and playing the game that we love. I just had so much fun — granted I didn’t have to travel far.”