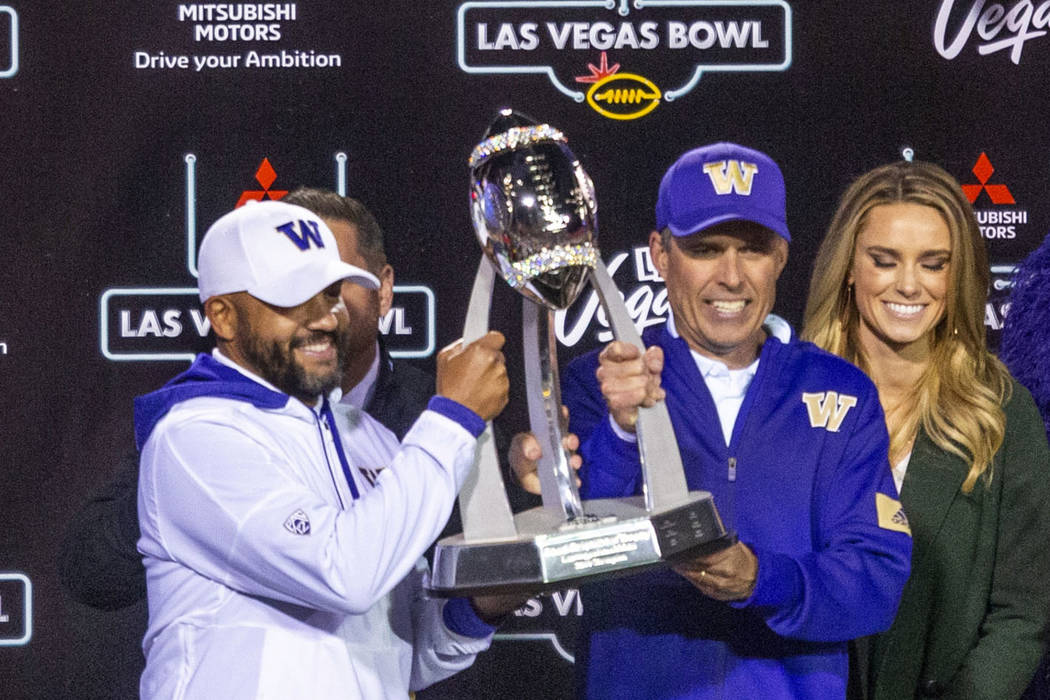 Washington ended the Chris Petersen era on a high note Saturday in the Las Vegas Bowl. And defensive coordinator Jimmy Lake showed why he was chosen to take over the program.

Lake’s defense was stellar at Sam Boyd Stadium, overpowering Boise State in a 38-7 victory. Petersen’s successor had an excellent game plan for the No. 18 Broncos, limiting them to one touchdown in 10 drives. The Huskies forced three turnovers and had no defensive penalties.

It seemed only fitting that Lake lifted the trophy with Petersen after the game.

“When we get turnovers on defense, it changes everything,” Petersen said. “We got turnovers tonight.”

Washington didn’t conduct a search when Petersen announced he was stepping down as the Huskies’ coach on Dec. 2. Lake, 43, was immediately tabbed for the job.

Lake has been immersed in Petersen’s “Built For Life” coaching philosophy since 2012, when he was hired to become Boise State’s defensive backs coach and passing game coordinator. He moved with Petersen to Washington in 2014, became the Huskies’ co-defensive coordinator in 2016 and was promoted to sole DC in 2018.

Saturday showed why Lake kept rising up the ranks. His players were prepared for Boise State’s motion-heavy attack and rattled freshman quarterback Hank Bachmeier until he was pulled in the third quarter.

Defensive back Myles Bryant intercepted a Bachmeier pass on the first drive of the game. The Broncos punted on their other four first-half drives, including two three-and-outs. It was the first time Boise State didn’t score in a first half since Sept. 27, 2014 at Air Force.

“Nothing that we threw today was — other than one early on to (redshirt junior tight end John) Bates — really wide open,” Broncos coach Bryan Harsin said. “It was contested.”

Lake’s defense didn’t let up in the second half. Washington allowed a third-quarter touchdown but held Boise State well below its scoring average of 36.8 points per game. That mark was 14th-best in the FBS entering Saturday.

The victory should help Lake step into his new role with momentum after the Huskies finished this season with fewer than 10 wins for the first time since 2015.

The cupboard certainly isn’t bare at Washington. Despite the pending coaching transition, the Huskies signed 23 players to national letters of intent Wednesday. Their class is 14th overall and first in the Pac-12 in 247Sports’ composite rankings.

That kind of talent should make for a smooth transition. And if Lake can keep coaching like he did Saturday, Washington will be OK as it adjusts to life without Petersen.

“I feel probably the best out of everyone because I’ve seen what he’s done for (defensive backs) in my class and the class before me,” Bryant said. “He’s learned a lot from coach (Petersen) like he’s said so many times. We’re going to carry on the tradition (of this program).”