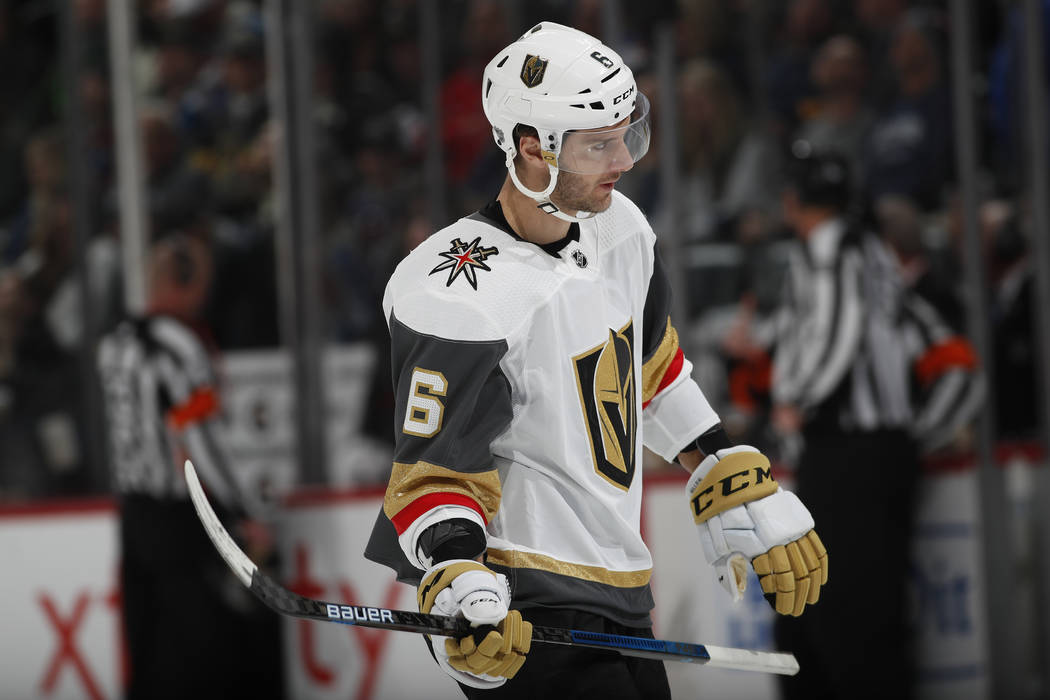 With the Golden Knights set to shed salary this offseason, it was only a matter of time before other clubs started putting out feelers for potential trades.

One name that continues to be mentioned is Colin Miller.

The defenseman struggled through injuries and multiple stints in coach Gerard Gallant’s doghouse this past season and now is on the trading block, according to multiple reports.

“I think (my season) had ups and downs, just like our team did,” Miller said during his exit interview with the media last month. ” I think with our quick turnaround last year, it was definitely a little harder to get ready for the season. I guess in one sense it’s good to have a little bit more time to get ready for next season.”

Miller led the Knights’ defensemen in scoring during the team’s inaugural season, but he couldn’t match that level of consistency throughout 2018-19.

He has three years remaining on his contract that carries a $3.875 million salary cap hit per season and is valued across the league for being a right-shot defenseman. Interest in the 26-year-old is expected to pick up ahead of the NHL draft, which takes place June 21-22 at Vancouver, British Columbia.

Miller never appeared comfortable in the shutdown role alongside Brayden McNabb during the first 20 games while Nate Schmidt was serving his suspension and missed 13 games from Dec. 20 to Jan. 15 with an upper-body injury.

Miller then fell out of favor with Gallant during the second half and was a healthy scratch for two games on two separate occasions. He also sat for Game 1 of the Western Conference quarterfinal against San Jose.

“When Colin plays real solid hockey, it doesn’t matter who he’s playing against,” Gallant said April 15. “It’s not against the opponents, it’s the way he gets ready mentally. We were a little disappointed, obviously, he didn’t start Game 1, but since then he’s played real strong hockey.”

The Knights currently are over the projected $83 million salary cap, and Sportsnet’s NHL insider Elliotte Friedman reported in a column on May 12 that Miller could be moved for the right price.

TSN’s Bob McKenzie was asked about a Miller-to-Toronto deal on his podcast last week and said, “He’s eminently available.” TSN ranks Miller No. 14 on its most recent Trade Bait Board.

Miller and pending unrestricted free agent Deryk Engelland were the Knights’ only right-hand shots on the blue line this past season; Zach Whitecloud and Dylan Coghlan are the lone right-handed defensemen in the minors.

The Maple Leafs remain in the market for a right defenseman, and general manager Kyle Dubas is familiar with Miller from their time together in Sault Ste. Marie of the major-junior Ontario Hockey League.

However, Toronto also is looking to cut salary and may not be in position to make a deal for Miller.

Another possibility to consider is the Knights hold five picks in the opening three rounds of next month’s draft and could include Miller as part of a package to move up from the 17th pick in the first round.

Miller had three goals and 29 points in 65 games, down from his 10-goal, 41-point effort in his first season with the Knights.

Despite strong possession metrics (56.01 Corsi For percentage at 5-on-5), Miller’s shooting percentage dipped to 2.3 percent from his previous career average of 5.9 percent.

Miller was fourth on the team in average ice time (19:39) but also ranked third overall with 22 minor penalties.

“We didn’t expect to be having summer this early and it’s frustrating, but there’s always things you can learn,” Miller said. “We have the right pieces in place, and hopefully the future’s very bright.”