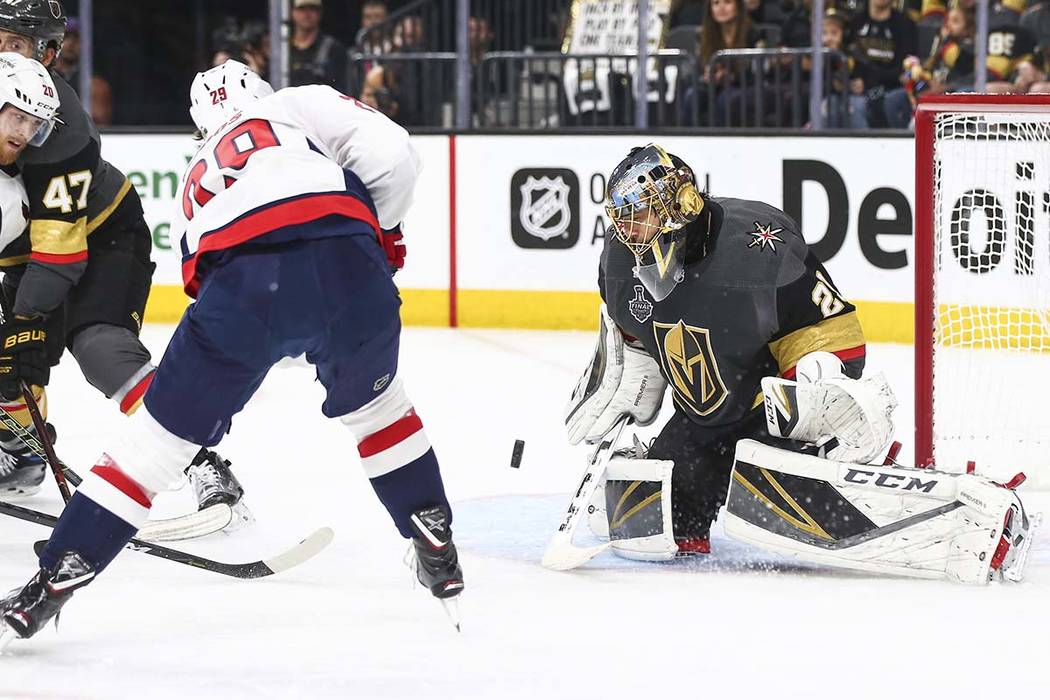 WASHINGTON — The final decision is out of Marc-Andre Fleury’s control. But his choice is clear.

With the Golden Knights set to play back-to-back games against Washington and Pittsburgh, Fleury’s preference isn’t to start against his former club. He’ll leave that to backup goaltender Malcolm Subban.

Fleury wants another crack at the Stanley Cup champions.

“Both teams mean a lot to me,” Fleury said Tuesday. “Obviously playing in Pittsburgh for so long, it would have been nice to be there. But this is a team that beat us in the finals, and I just want to get back on the ice against them.”

Barring something unforeseen, Fleury will get his wish when the Knights meet Washington at 5 p.m. Wednesday at Capital One Arena in a rematch of the Stanley Cup Final.

But aside from Fleury’s comments, the Knights are focused on turning around their slow start rather than revenge for last season’s postseason loss.

“I’m not worried about because Washington beat us in the Final last year we’re playing them game four of the regular season,” coach Gerard Gallant said. “It means no more to me. Do we really want to beat them? We want to win because we want two points. Besides that, it has nothing to do with what happened last year in the playoffs.”

As a painful reminder of what happened in June, the Knights dropped four straight after winning Game 1 and were forced to watch the Capitals celebrate on the ice at T-Mobile Arena.

Capitals goaltender Braden Holtby’s diving save to deny Alex Tuch late in Game 2 swung the momentum in favor of Washington, which won both games at home in the Final and doused the Knights’ dreams of hoisting the Cup in their inaugural season.

The Knights practiced Tuesday at Capital One Arena with Washington’s Stanley Cup champions banner hanging from the rafters.

“I missed that,” Knights forward William Karlsson said when asked if he noticed. “I’ve put all that behind me. I just want to look forward. They won last year, but now it’s a new season. There’s two points to play for.”

Fleury has a long personal history against the Capitals, including Game 7 victories in 2009 and 2017 en route to winning the Stanley Cup with Pittsburgh.

He is 22-12-2 with a 2.54 goals-against average and .914 save percentage in 38 career regular-season appearances against Washington.

The Knights limp into Wednesday’s matchup after losing two of their first three games. They allowed five goals in the opener against Philadelphia, four goals on 17 shots in a loss at Buffalo on Monday, and now face the highest-scoring team in the league.

Washington, which hasn’t played since Thursday, is averaging 6.5 goals through its first two games while going 1-0-1. T.J. Oshie leads the Capitals with three goals and two assists.

“I don’t think this game is any different than the first three we played,” Knights wing Reilly Smith said. “I don’t think it’s a grudge-match game or anything that the media wants to make it. We’re focused what we can bring to the table (Wednesday) night.

“I just think we have to stick to our game and play a little smarter on the defensive side and put some more focus on them to try to beat us instead of us beating ourselves like we’ve done in two of the three games so far this year.”

^More Golden Knights: Follow all of our Golden Knights coverage online at reviewjournal.com/GoldenKnights and @HockeyinVegas on Twitter.