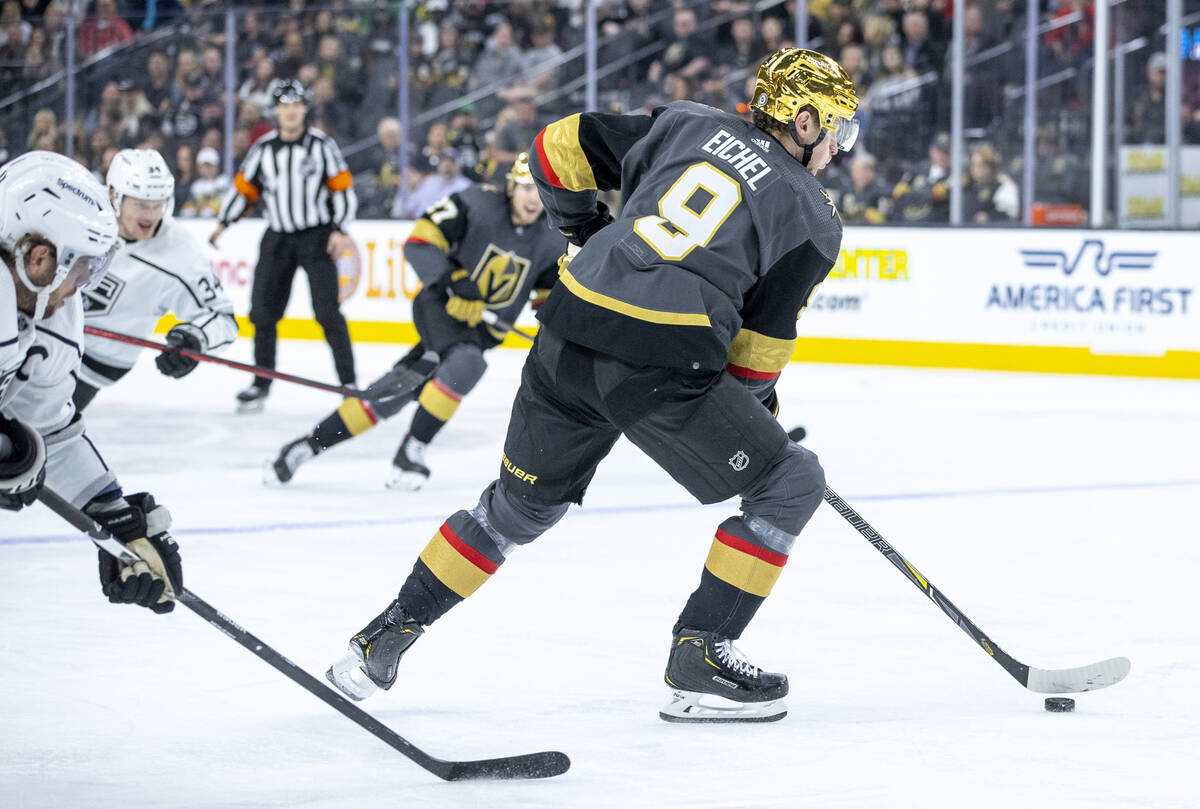 Golden Knights center Jack Eichel (9) moves the puck up the ice versus the Los Angeles Kings defense during the first period of their NHL game at T-Mobile Arena on Saturday, March 19, 2022, in Las Vegas. (L.E. Baskow/Las Vegas Review-Journal) @Left_Eye_Images 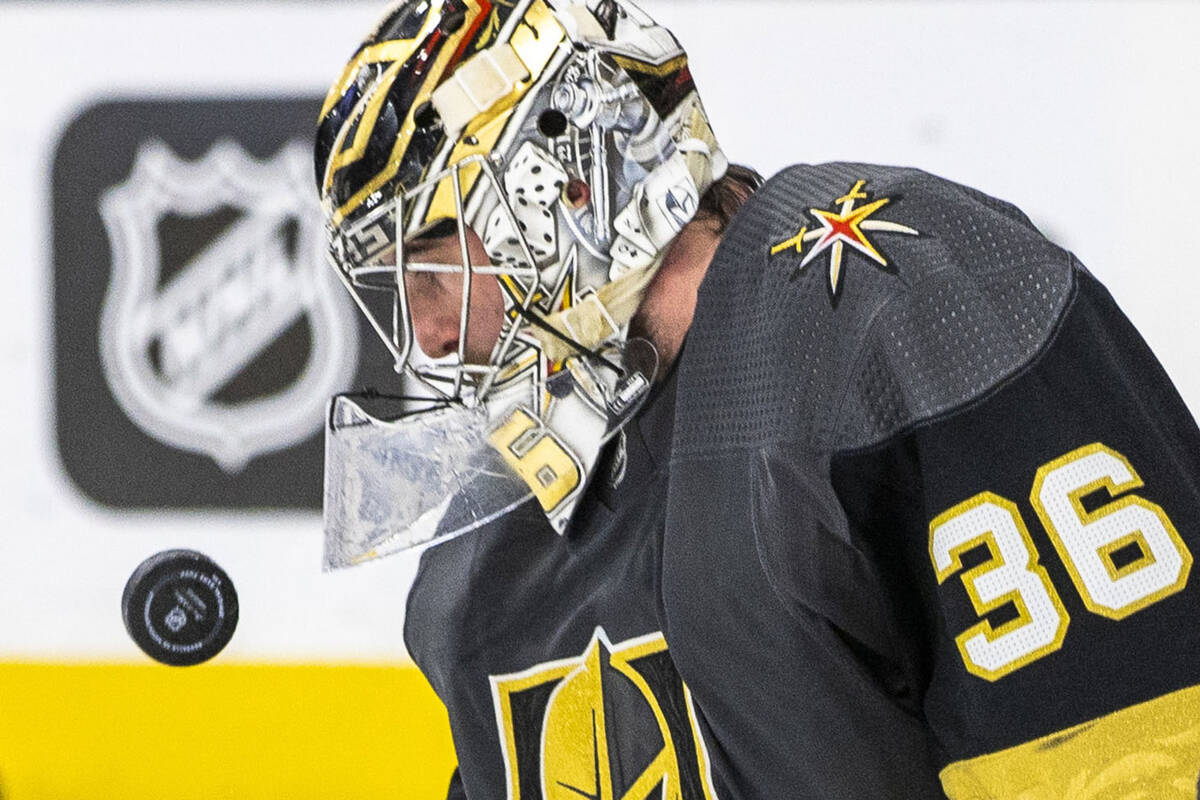 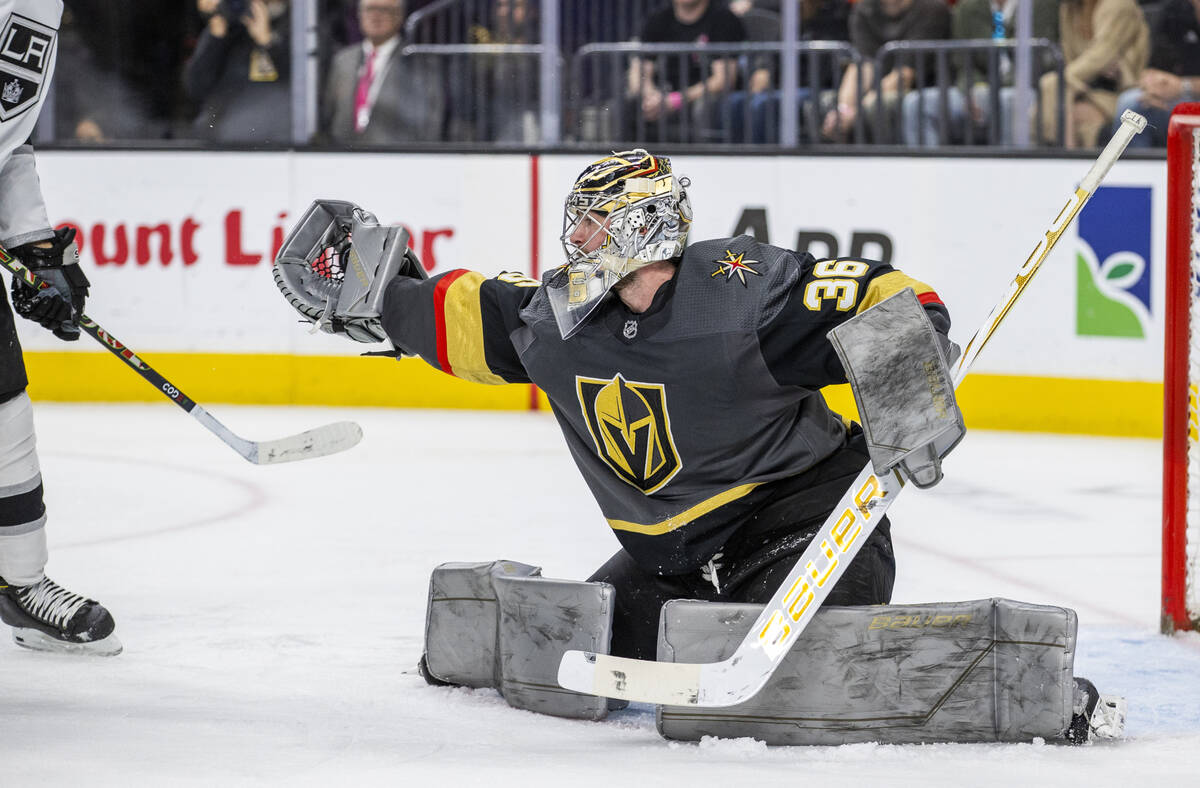 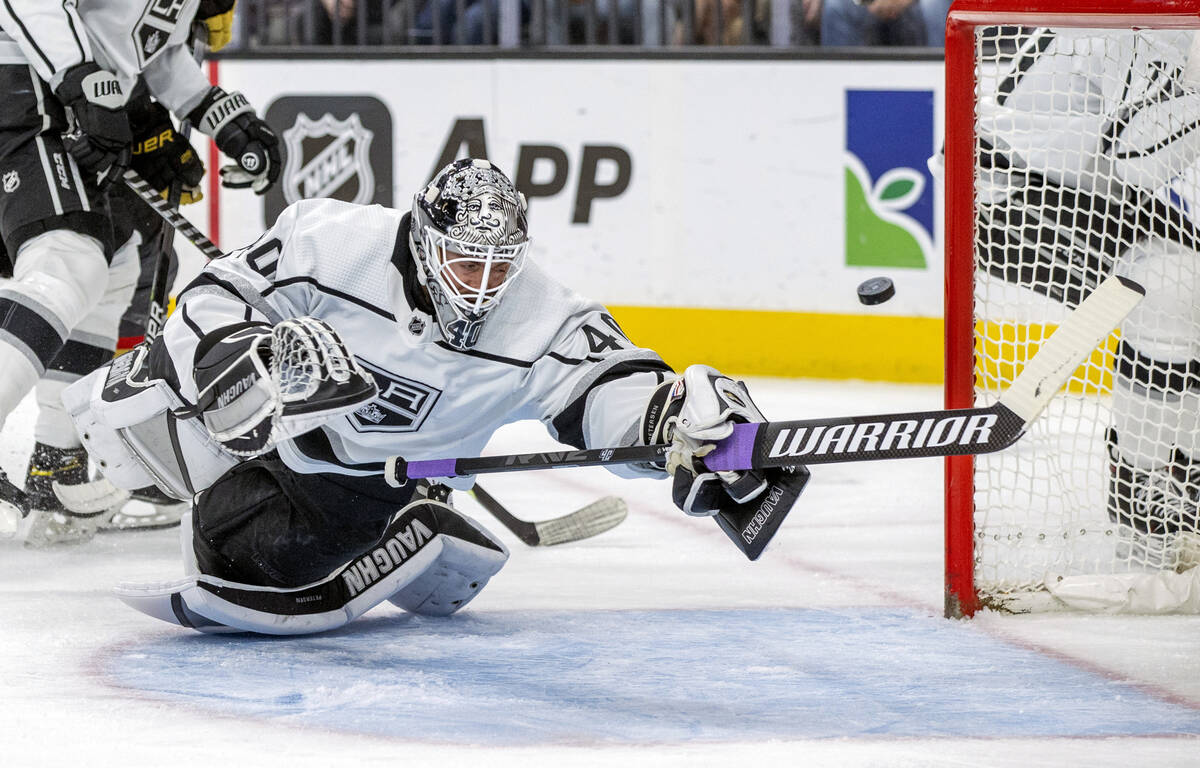 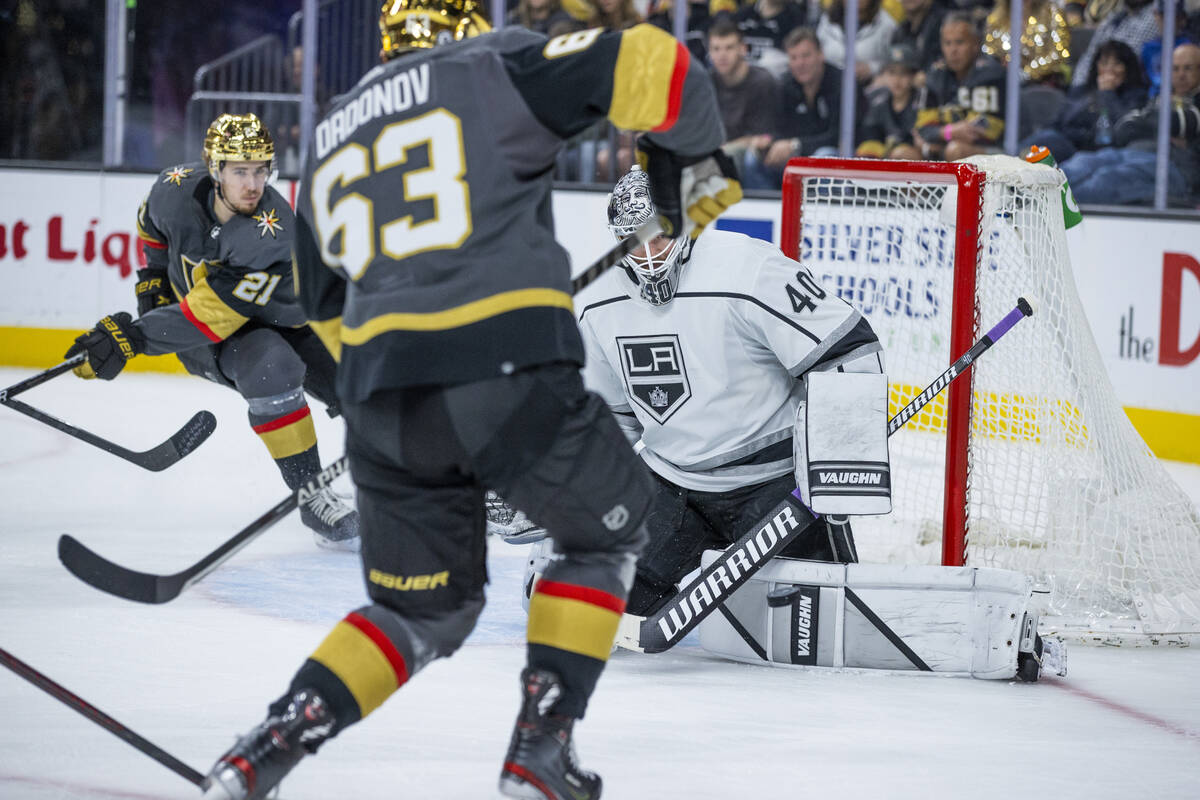 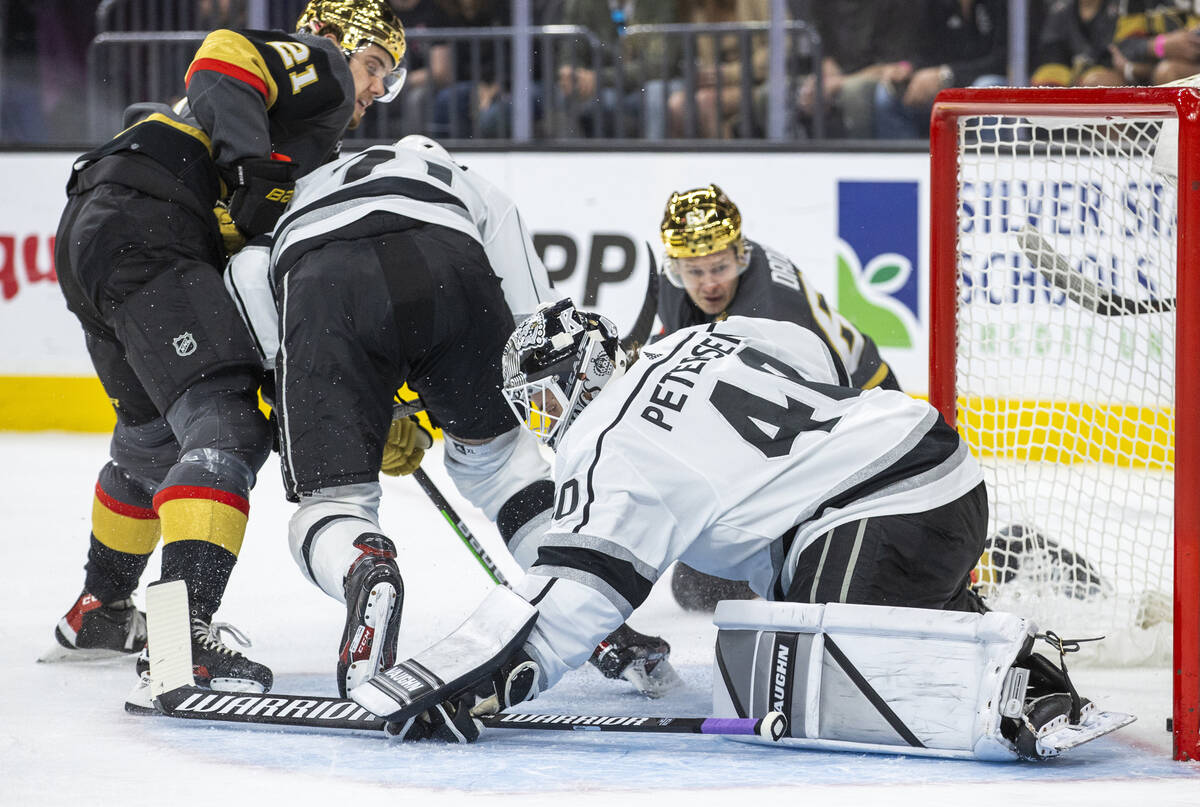 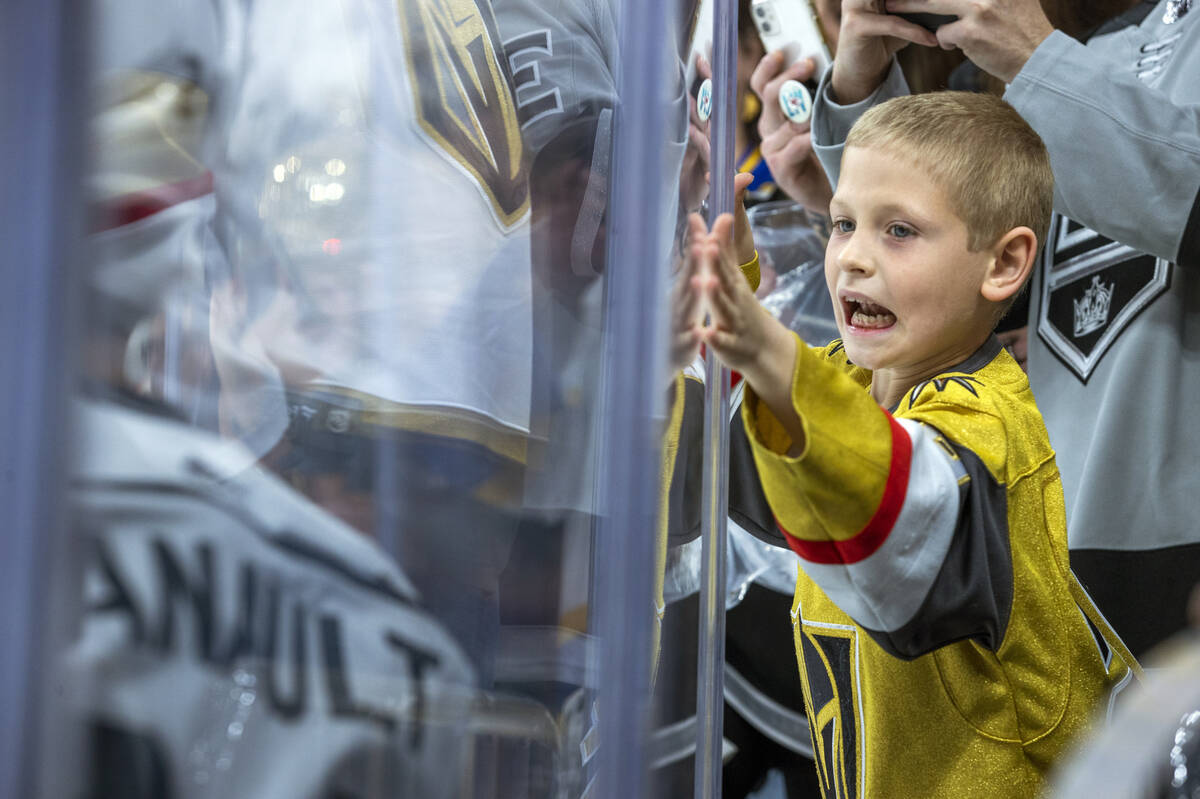 A Golden Knights fan pounds on the glass at Los Angeles Kings players during the first period of their NHL game at T-Mobile Arena on Saturday, March 19, 2022, in Las Vegas. (L.E. Baskow/Las Vegas Review-Journal) @Left_Eye_Images 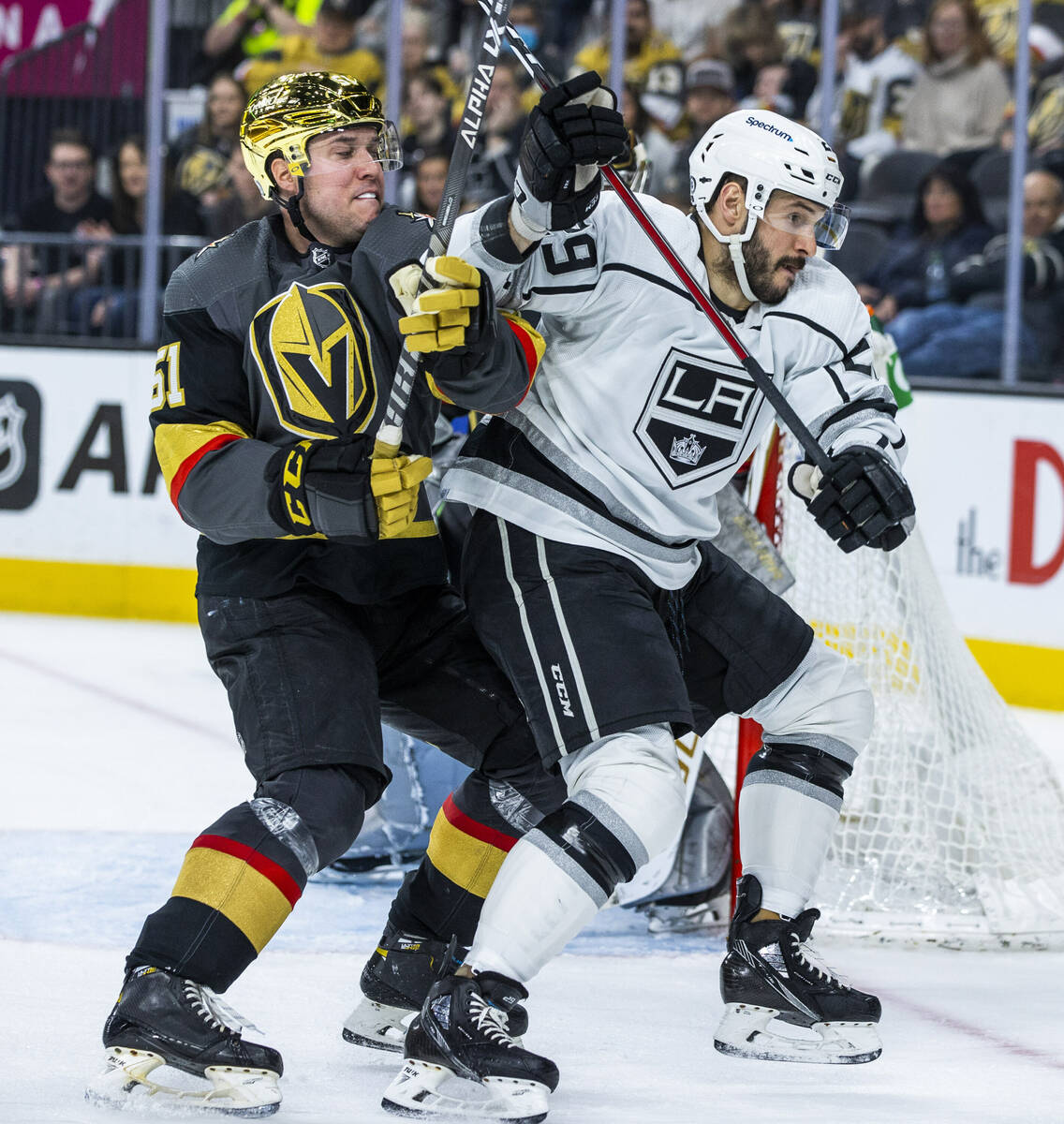 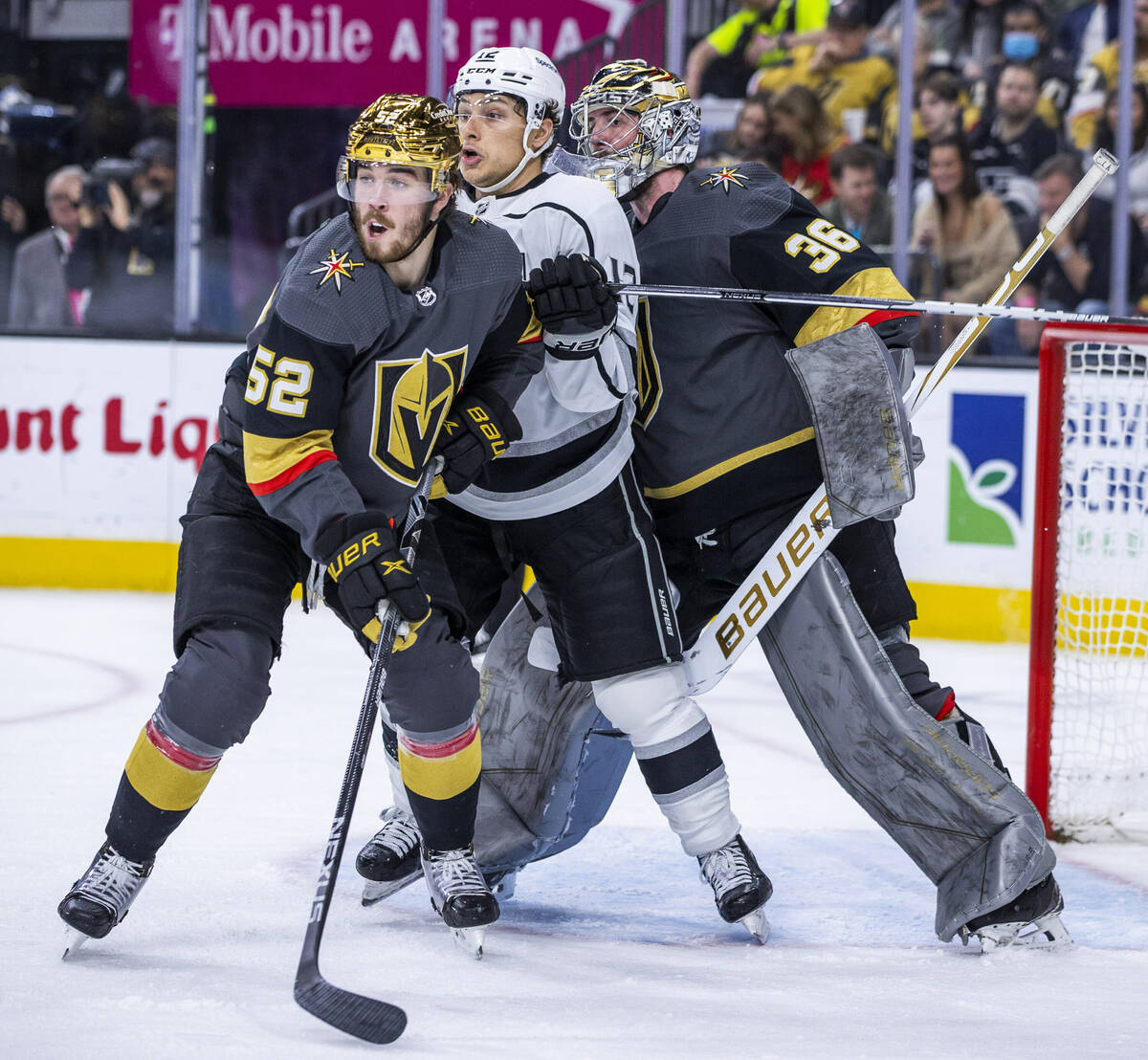 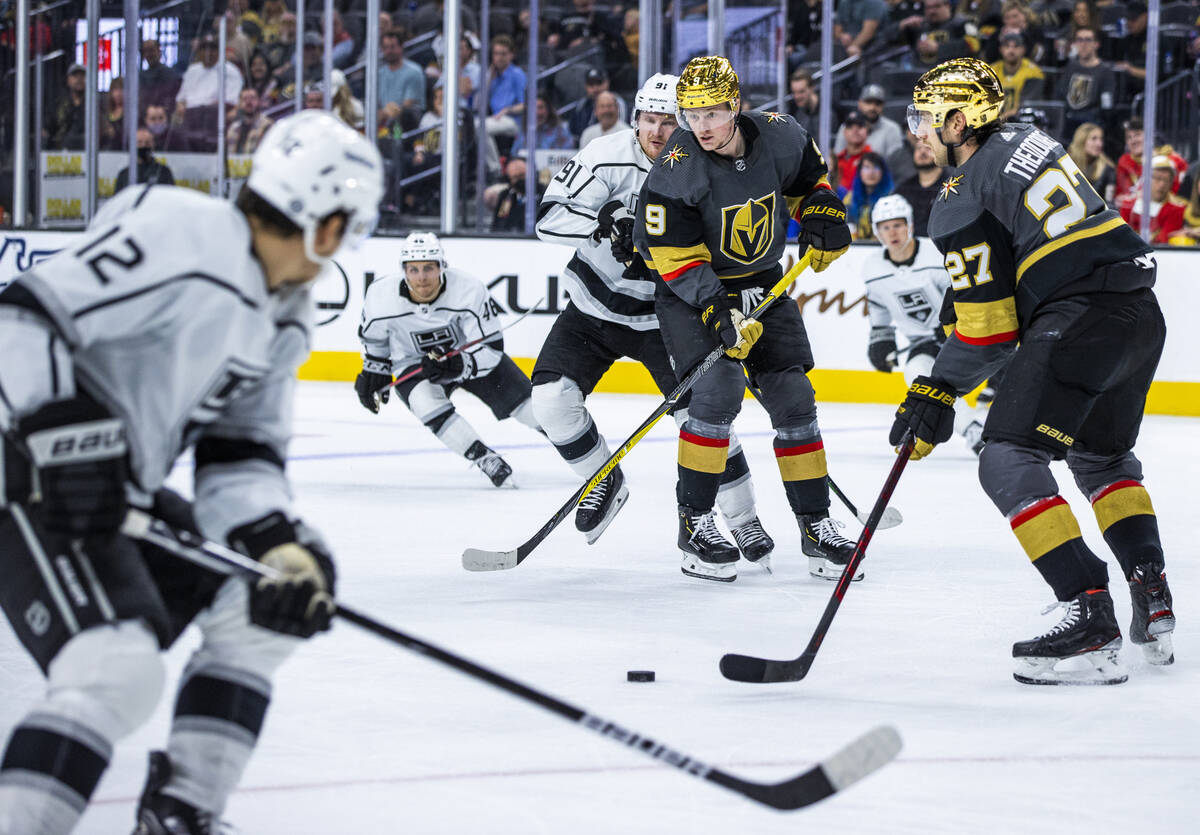 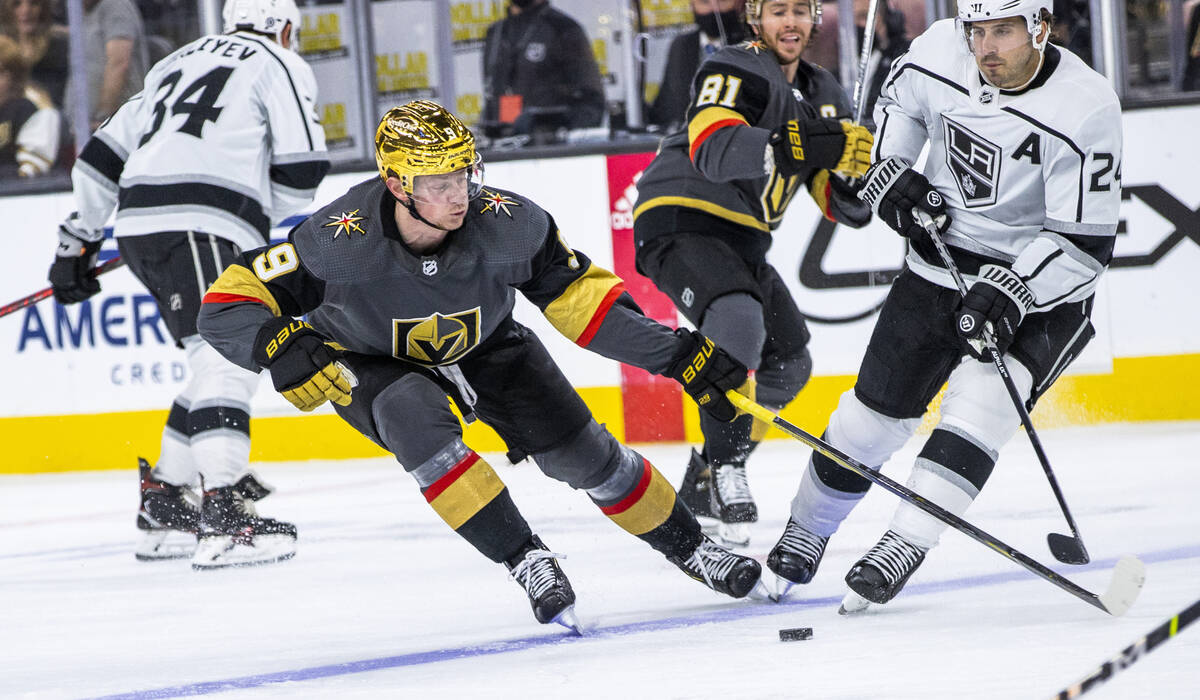 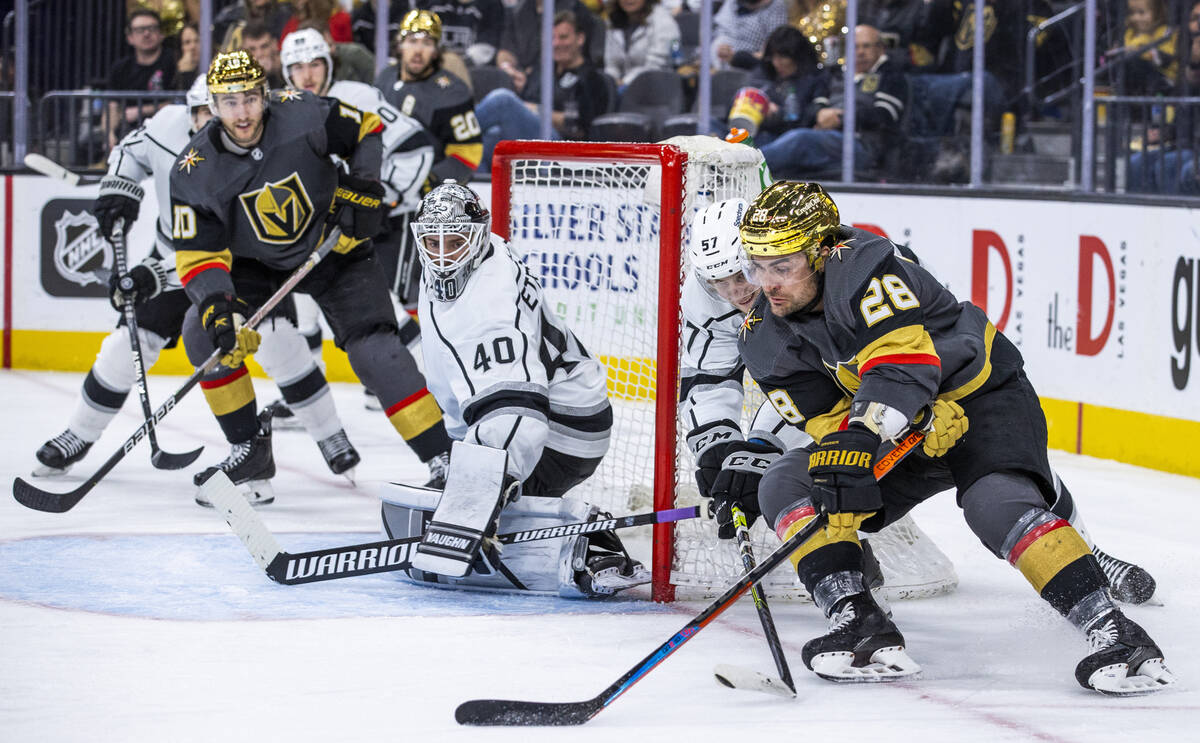 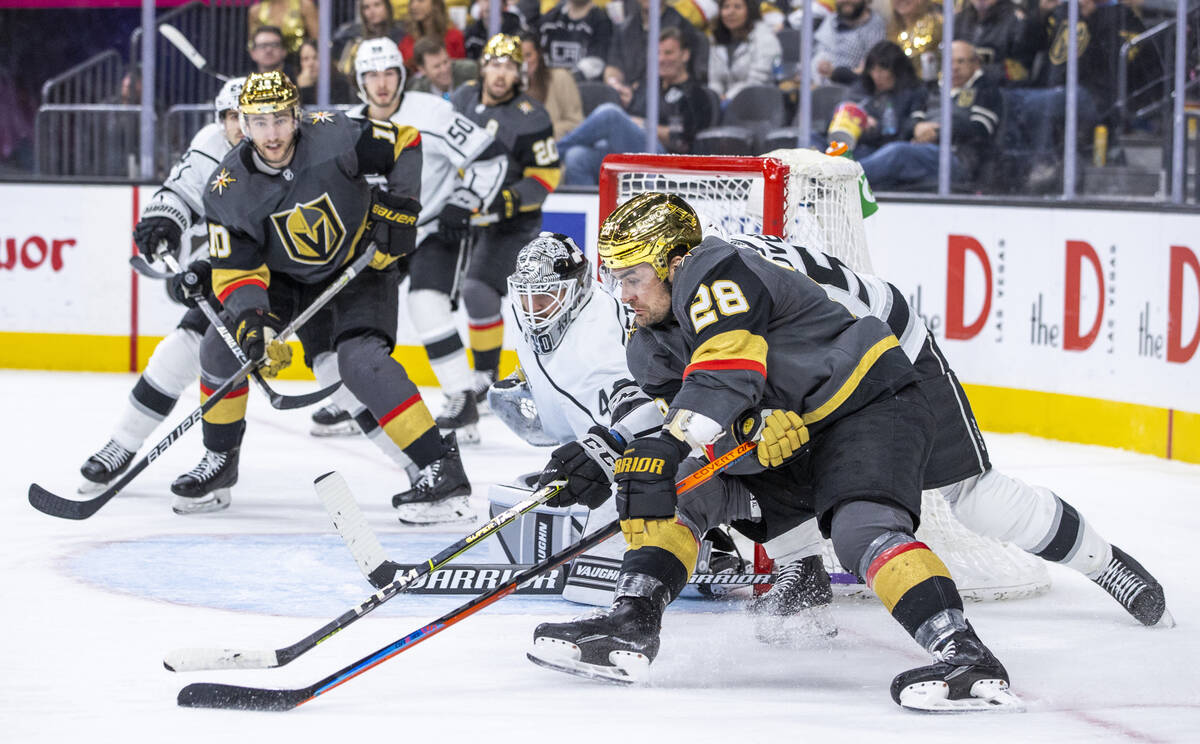 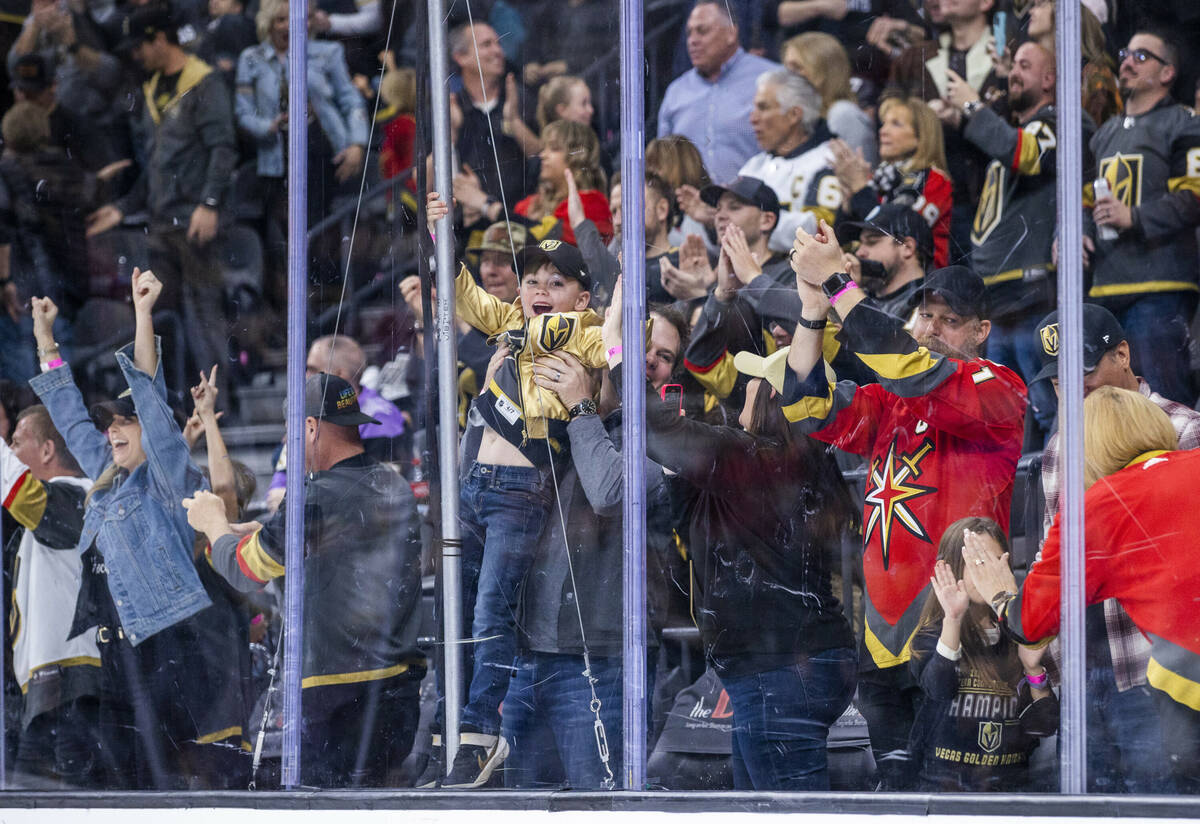 Golden Knights fans celebrate another score over the Los Angeles Kings during the third period of their NHL game at T-Mobile Arena on Saturday, March 19, 2022, in Las Vegas. (L.E. Baskow/Las Vegas Review-Journal) @Left_Eye_Images 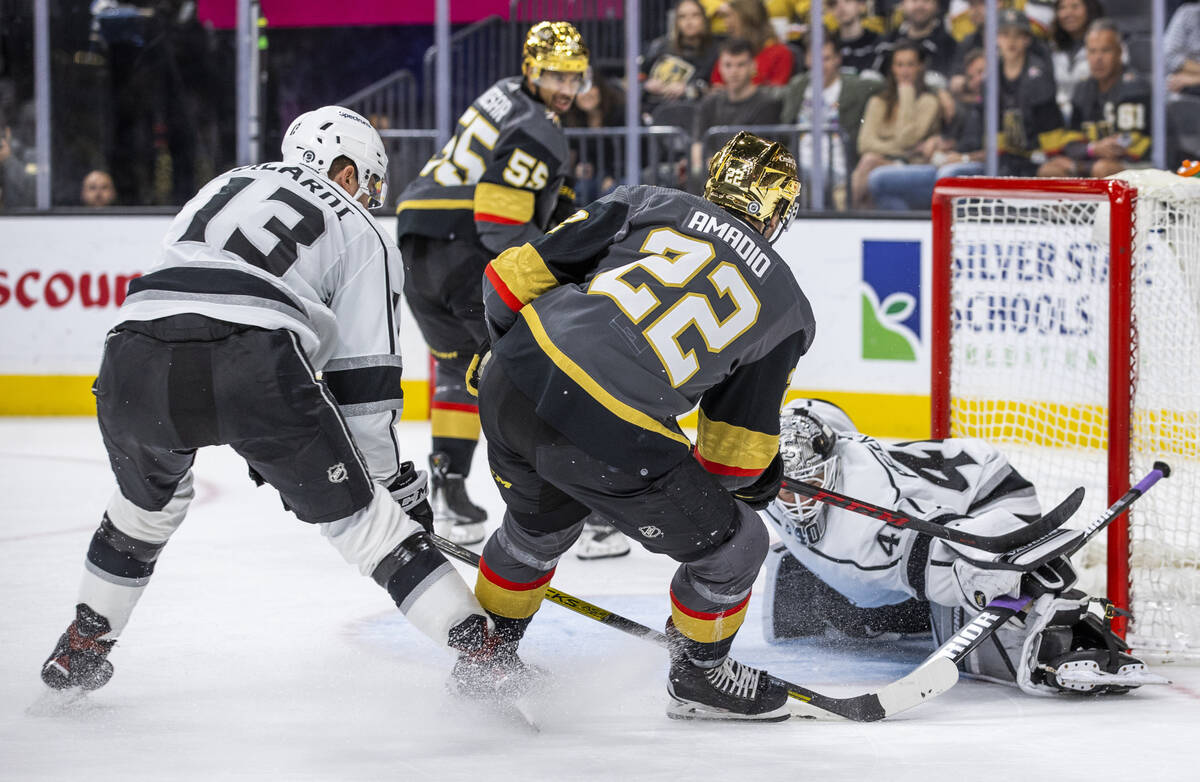 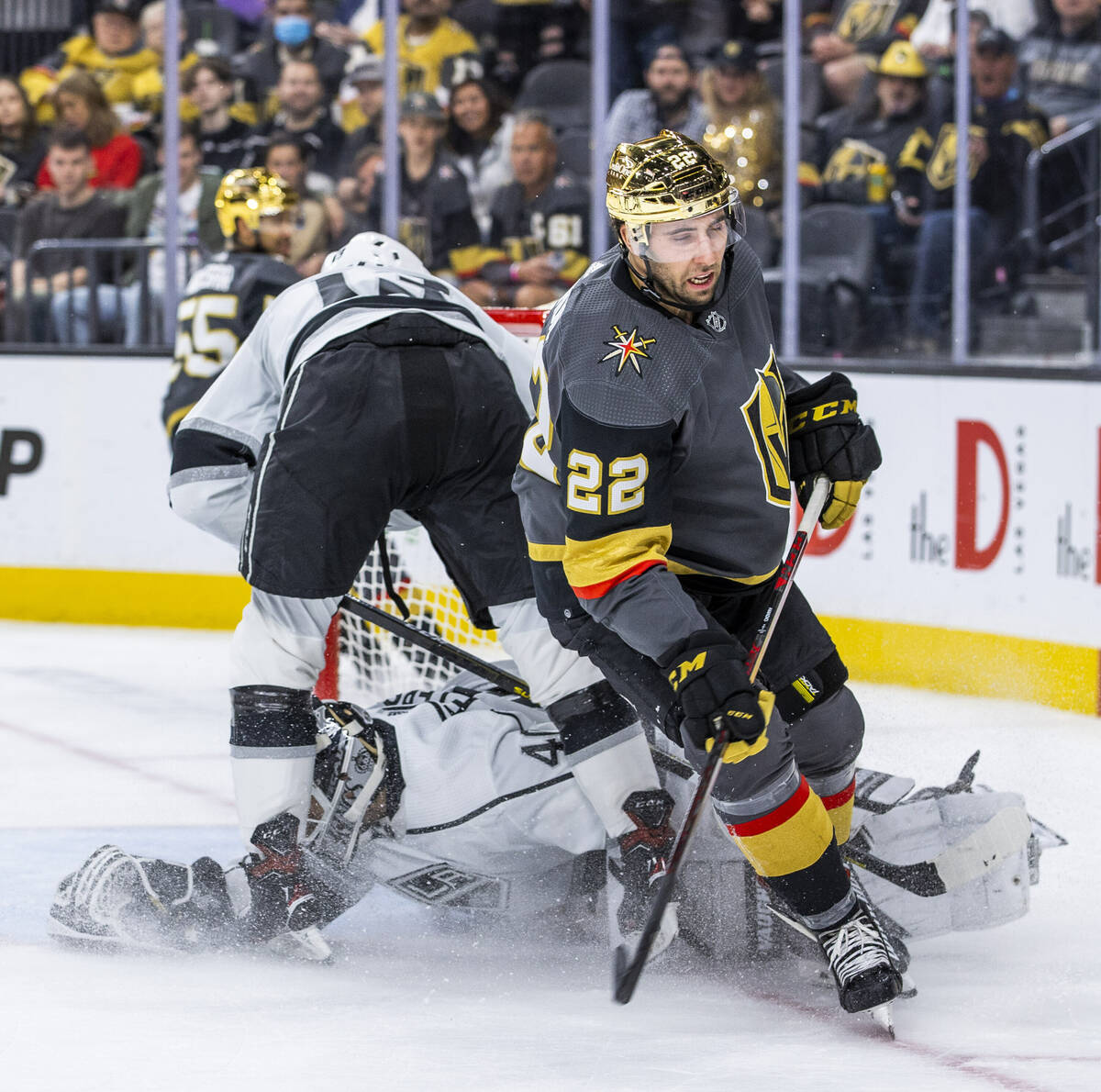 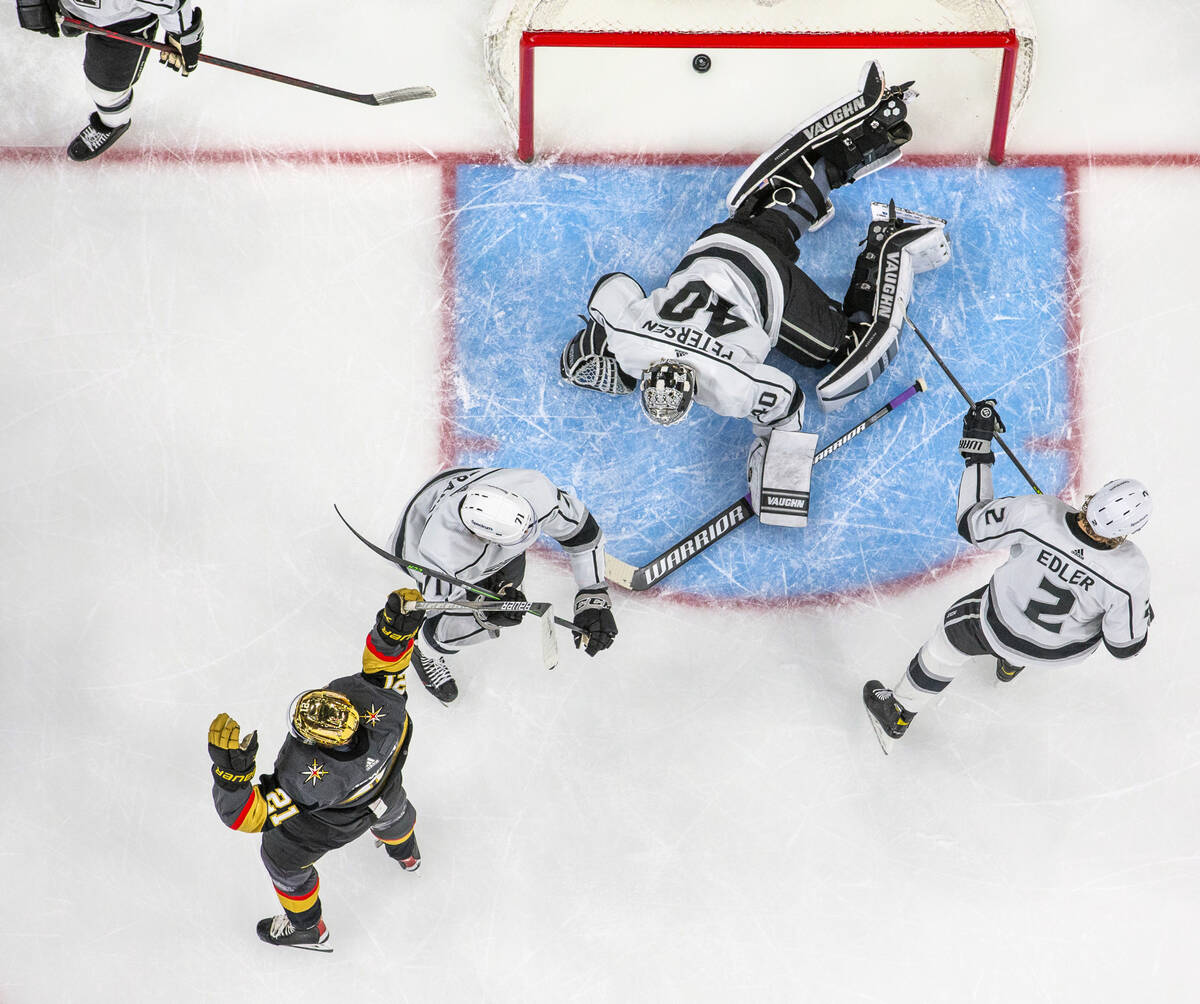 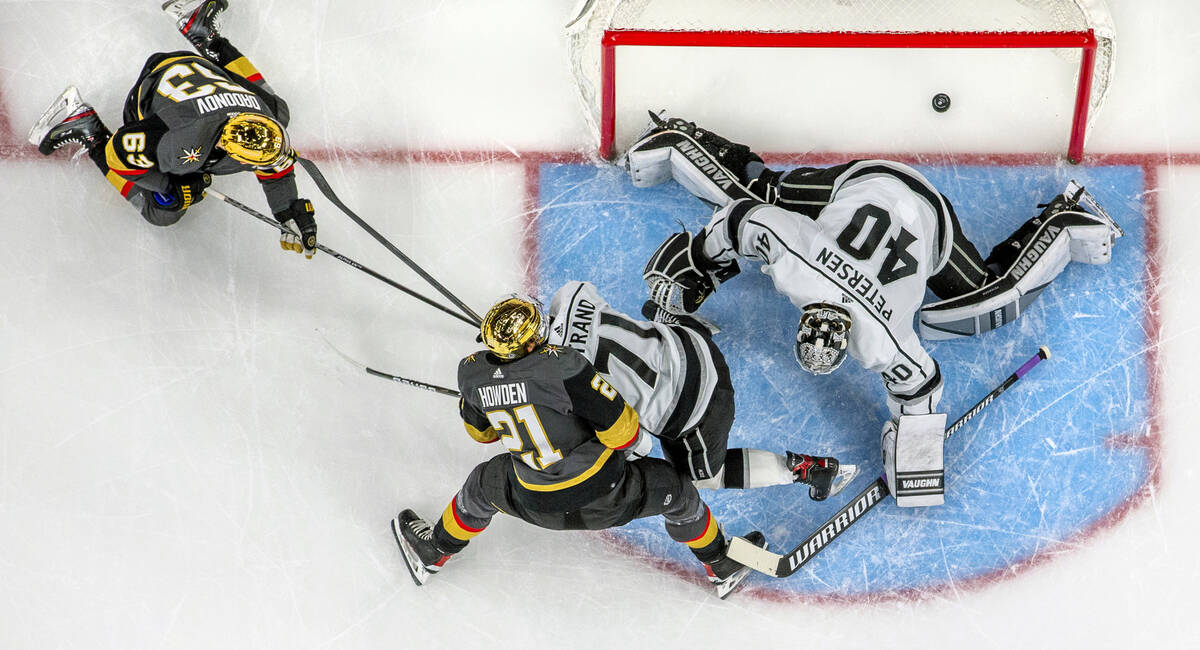 The test results on Jack Eichel’s upper-body injury couldn’t have been all positive.

Had everything come back clean, the Golden Knights center wouldn’t have been a game-time decision Saturday after originally being listed as doubtful.

“But he gutted it out,” coach Pete DeBoer said. “He’s a guy that can play with some pain. That’s what he’s doing along with a lot of other guys. It’s that time of year.”

Eichel’s effort epitomized a blue-collar performance from the Knights, who battled for every inch of ice in a 5-1 victory over the Los Angeles Kings at T-Mobile Arena and appear to have righted the ship in the nick of time.

The win was the second in a row for the Knights following a five-game losing skid and pushed them within four points of the second-place Kings in the Pacific Division.

Goalie Logan Thompson shined in his second consecutive start with 38 stops. Five players scored, including Chandler Stephenson (power play) and Mattias Janmark (short-handed) in the second period to put the Knights in control.

“We need to keep winning here, so that was huge,” Janmark said. “We’re kind of in playoff mode right now for the rest of the year. It’s good to get out of that losing streak, but we need to keep our eyes forward and make sure we don’t end up there again.”

Eichel was injured in Thursday’s win over Florida when he blocked a shot with a little more than five minutes remaining in the second period. Replay showed the puck appeared to strike Eichel in his right hand. He took one more shift but didn’t return for the third period.

DeBoer said Friday that Eichel was doubtful against the Kings. He even joked there needed to be an exorcism performed to help with the Knights’ injury hex.

Keen observers noticed Eichel didn’t take faceoffs Saturday, but he set up Stephenson for the go-ahead goal in the opening minute of the second.

Eichel entered the zone, worked a give-and-go with Jonathan Marchessault and whipped a pass in front of the net to Stephenson for the tap-in, which ignited the announced crowd of 18,136.

“I’ve been really impressed with him,” DeBoer said. “His battle level, his compete, his willingness to play a 200-foot playoff type game for us. Now he’s willing to play through some injuries in order to be out there helping us. There’s a lot of good things there.”

Here’s what stood out from the game:

With the Knights in the middle of a playoff chase, DeBoer made a loud statement by handing Thompson his second straight start rather than going back to the more experienced Laurent Brossoit.

The move paid off. Thompson came up with 19 saves in the third period to preserve the victory.

“He won it for us,” Stephenson said.

After two straight strong outings, Thompson appears to have earned the No. 1 role until he falters or Robin Lehner returns. They’ll likely need both goaltenders for back-to-back games at Minnesota and Winnipeg starting Monday.

“For Pete to give me this opportunity, I didn’t want to let him down or let the team down,” Thompson said. “It’s huge but it’s over now. Just got to keep building from it.”

It’s been a while since the Knights came out on the right side of the special teams battle.

The penalty kill allowed a goal in five straight games and was successful on less than 70 percent of its short-handed situations since March 4. Against Los Angeles, the Knights killed all three penalties, including consecutive kills in the first period when Thompson kept the Knights from falling behind.

“We challenged our group,” DeBoer said. “Your goaltender is always your best penalty killer and our goalie was real solid tonight.”

Meanwhile, the power play clicked for the fourth straight game and is 6-for-24 in eight games since assistant Ryan Craig starting overseeing the unit.

Stephenson’s goal was his first in 11 games since he scored Feb. 26 against Colorado.

It also was his career-high 15th goal of the season, one more than he had last season in 51 games. Prior to arriving with the Knights on Dec. 3, 2019, Stephenson had 14 career goals in parts of five seasons with Washington.

“Everyone knows what’s at stake and what we need to do, so everybody’s just trying to be as cool, calm and collected as we can and get as many points as we can,” Stephenson said. “Take it a game at a time and just try to do our best and work our best and I think everything will take care of itself.”