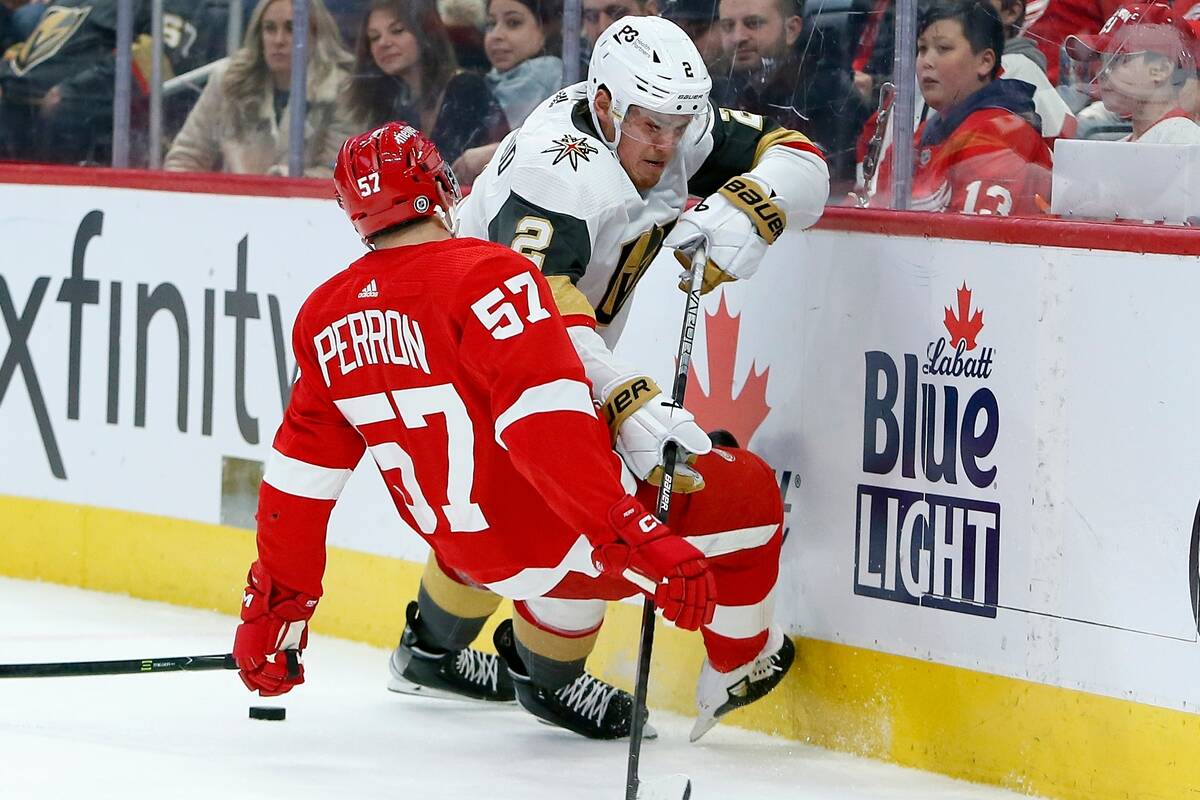 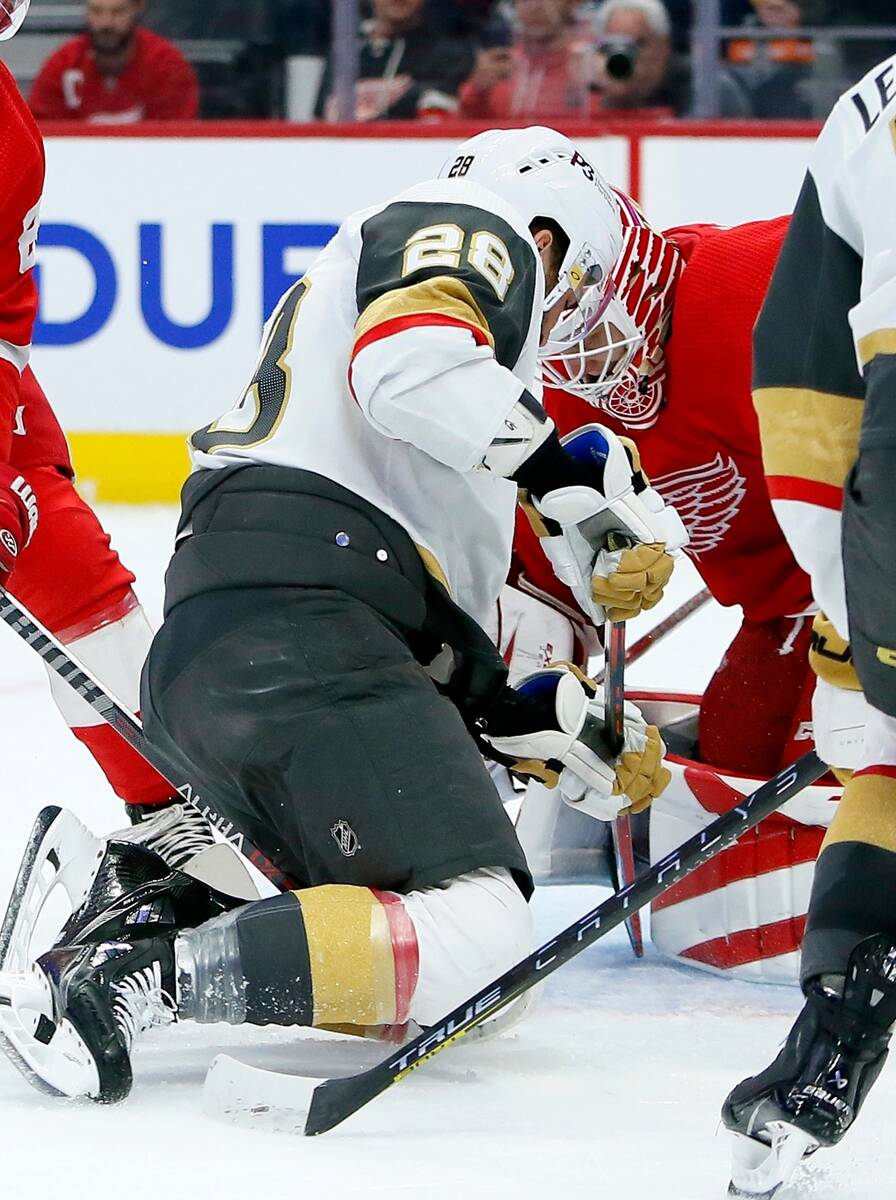 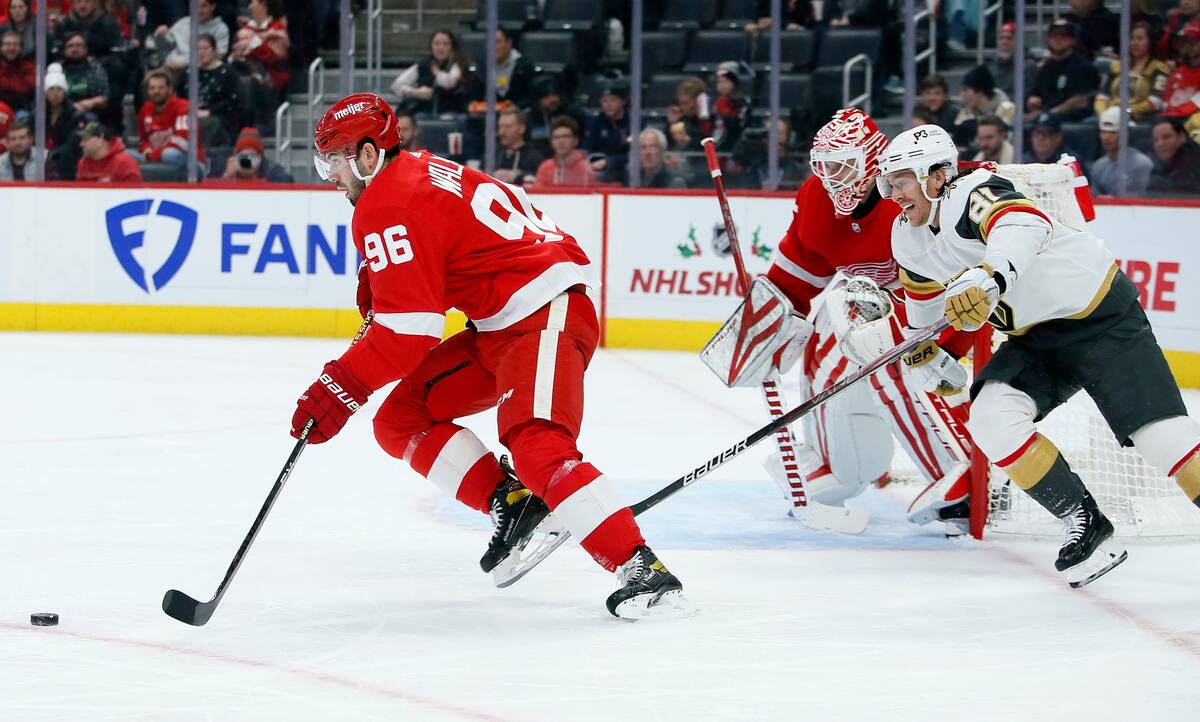 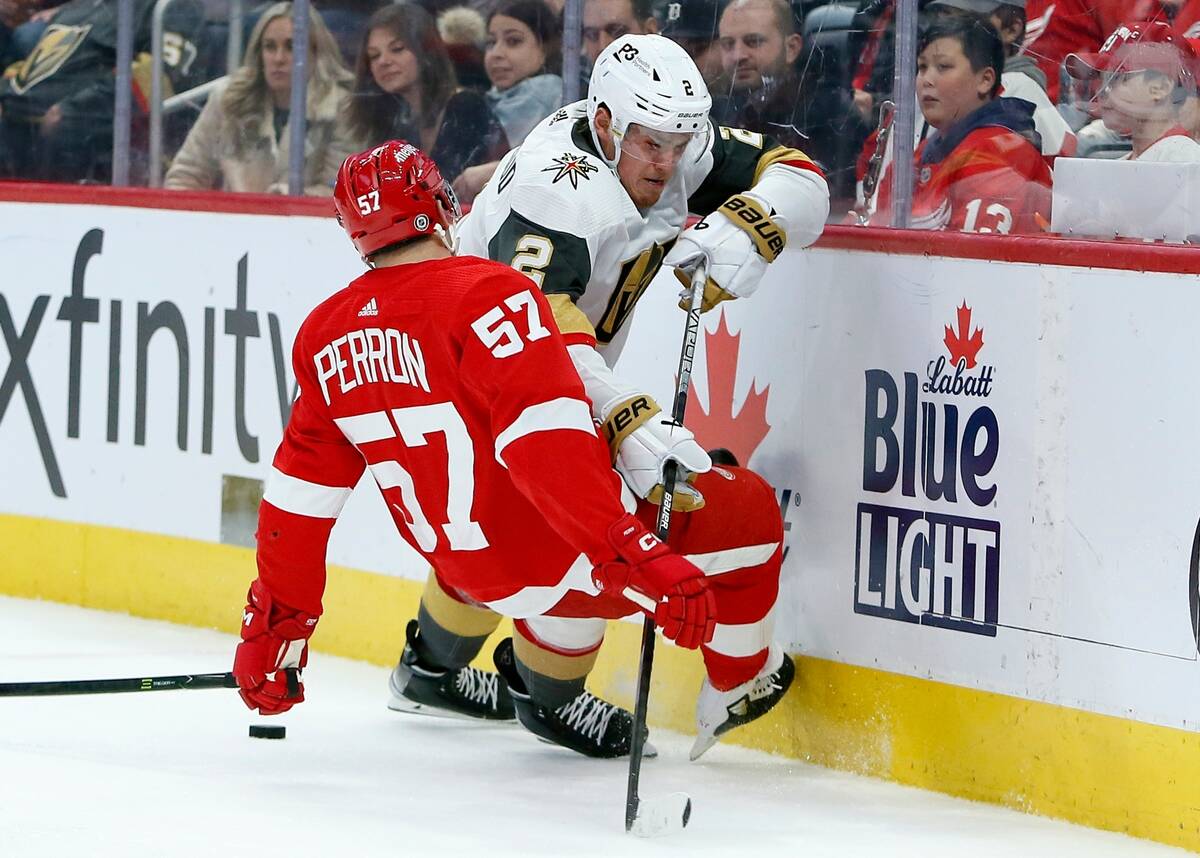 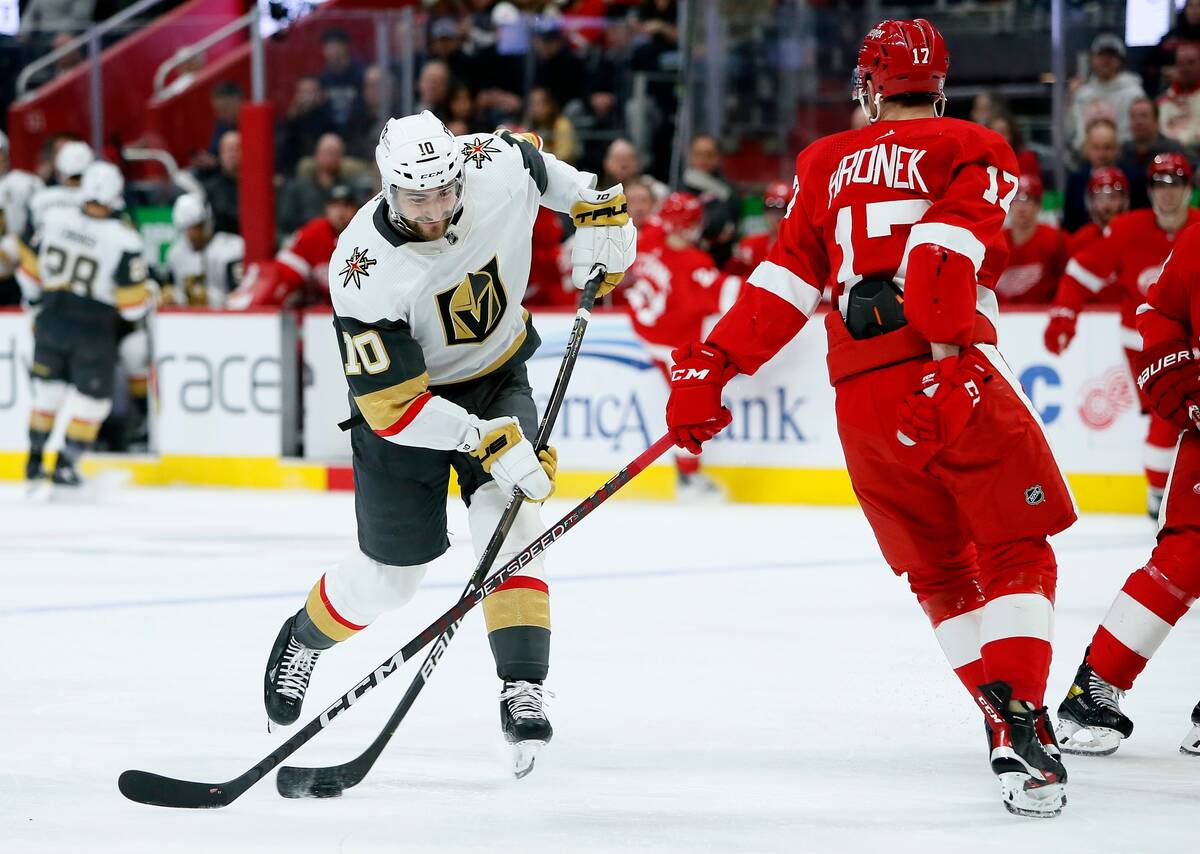 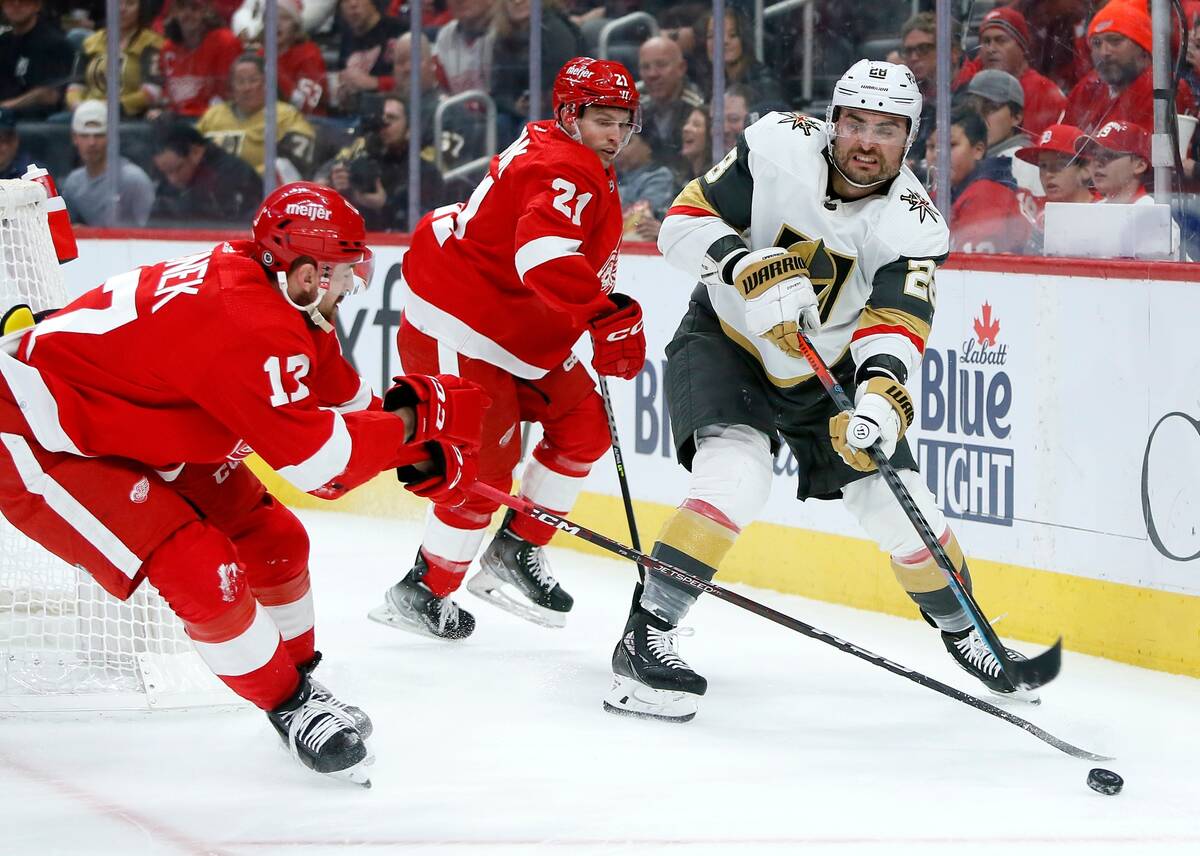 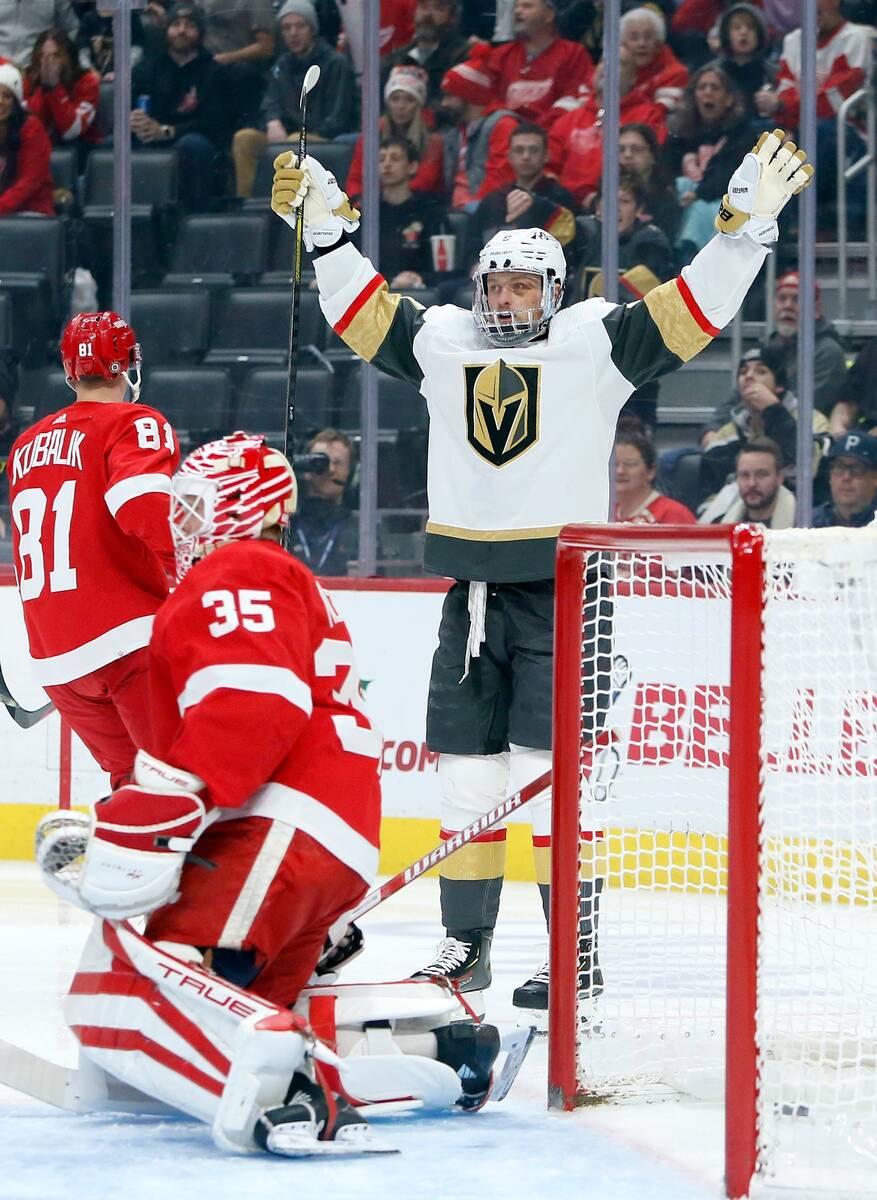 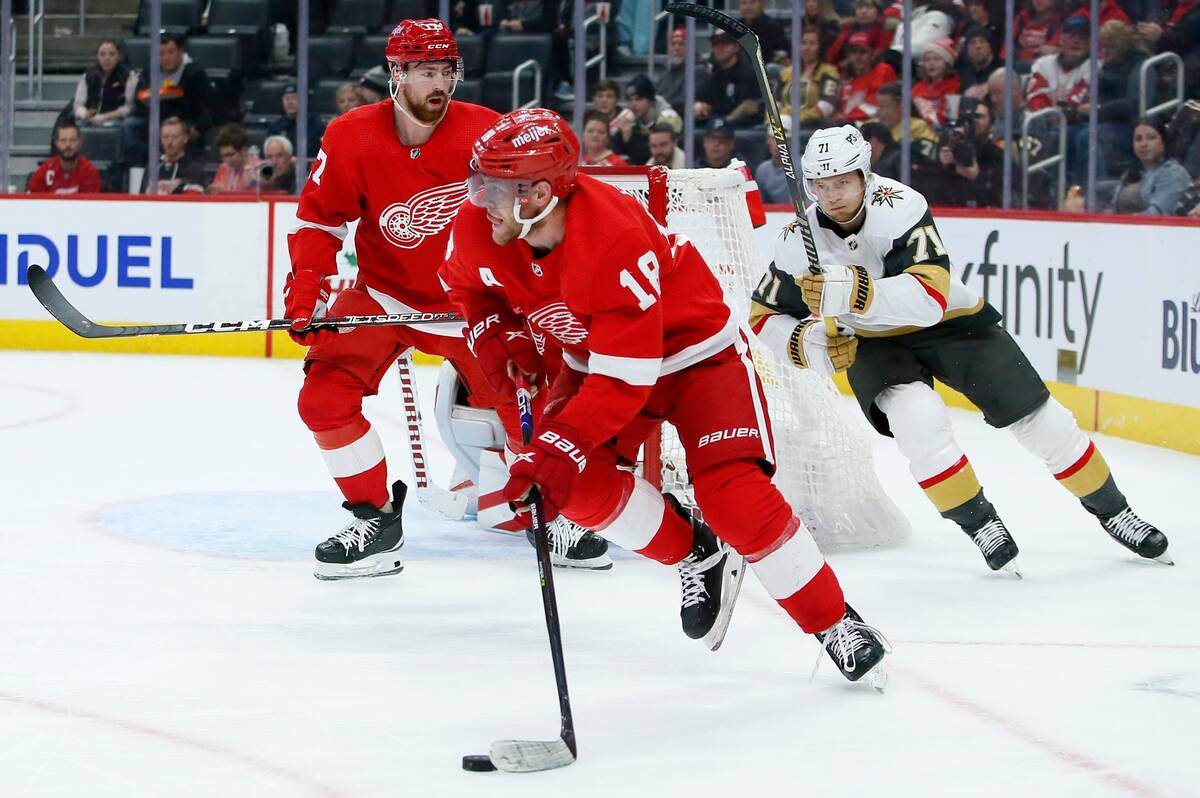 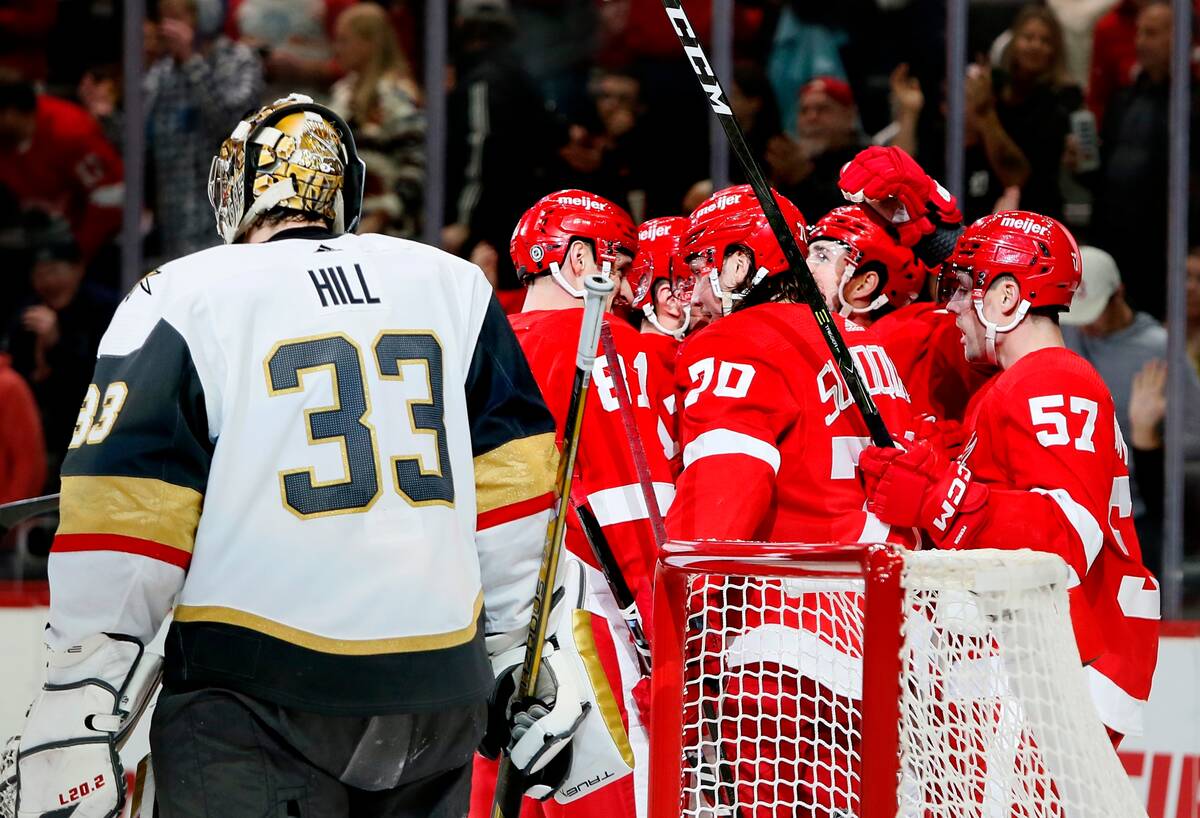 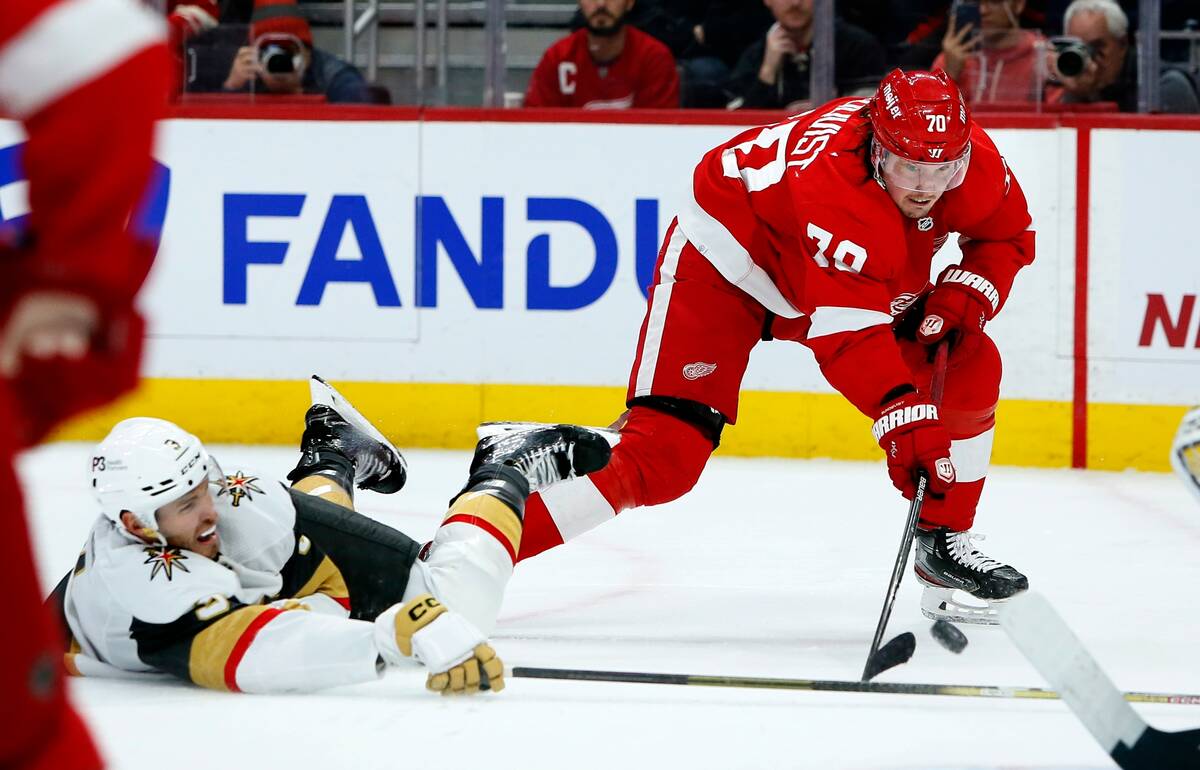 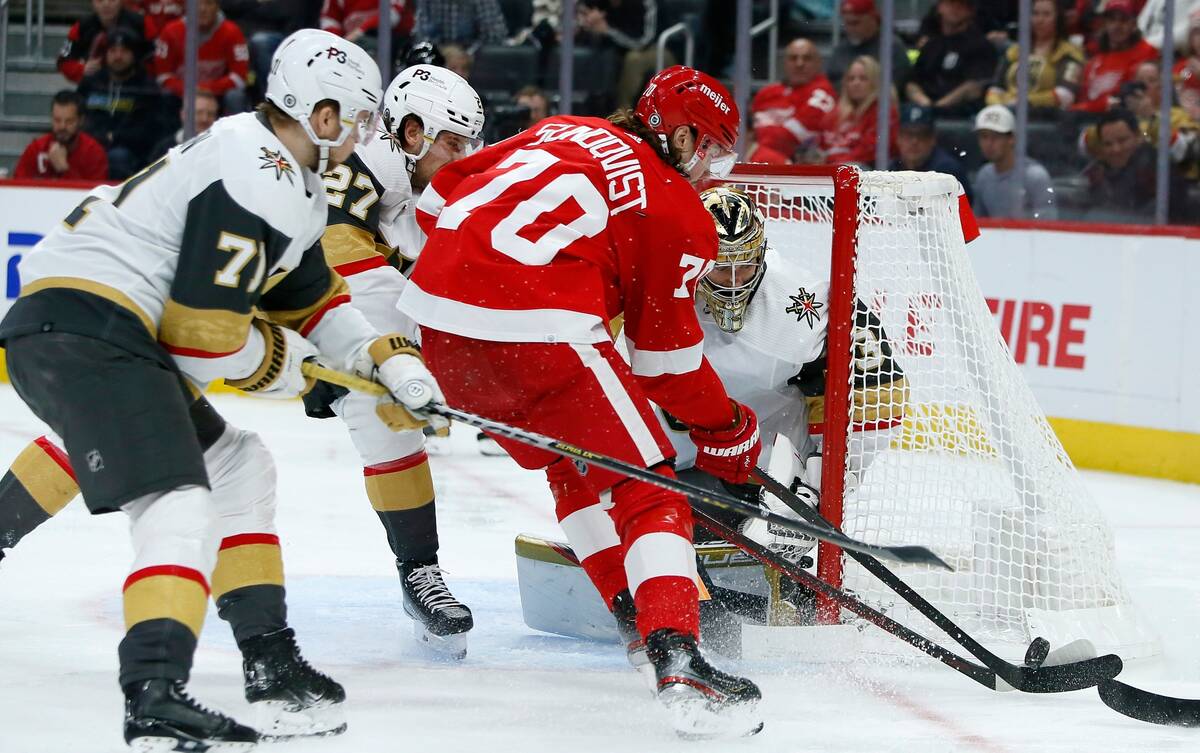 There was a lot to like about the Golden Knights’ game Saturday.

They defended better. They buried their chances. Their goaltending was strong. It all added up to a 4-1 win against the Detroit Red Wings at Little Caesars Arena.

The one area of concern came 5:18 into the third period. Center Jack Eichel left the game and went back to the locker room in discomfort. The Knights’ leading scorer never returned.

Coach Bruce Cassidy didn’t have much of an update afterward, other than to say the Massachusetts native and former Boston University star is being evaluated and likely will do everything in his power to play the team’s next game Monday in Boston.

“If there’s one guy that wants to play in Boston on Monday, it’s Jack,” Cassidy said.

Eichel’s absence loomed over an otherwise strong effort from the Knights (18-7-1).

The team, after allowing 15 goals its previous four games, gave up just one to Detroit (11-7-5). The Red Wings’ 25 shots on goal were the fewest for a Knights opponent since Nov. 19, and the second-fewest since Nov. 1.

The impressive defensive performance was buoyed by an opportunistic offense.

Eichel put the Knights up 1-0 only 1:04 into the game off a nice pass from left wing Chandler Stephenson. Right wing Jonathan Marchessault doubled the lead with a power-play goal 7:50 into the second.

Right wing Oskar Sundqvist responded with a power-play goal of his own 3:47 later that made the score 2-1. But the Knights’ penalty kill got its revenge. When Detroit’s next power play expired, center Nicolas Roy sprung right wing Phil Kessel for a breakaway coming out of the box. Kessel scored his second goal in 10 games to put the Knights ahead 3-1.

Left wing Reilly Smith later sealed the win with an empty-net goal. The Knights improved to 2-1 on their four-game road trip, with only a visit to the Bruins — who have the NHL’s best record and are 14-0 at home — remaining.

“Second and third, I thought we did really well,” said left wing Paul Cotter, a Canton, Michigan, native. “We played really well defensively. I don’t think they had too many five-on-five scoring opportunities.”

The Knights made a switch on the blue line, giving Daniil Miromanov his first game and making Ben Hutton a healthy scratch.

Miromanov, 25, provided more of an offensive element with defenseman Alex Pietrangelo (personal reasons) missing his third straight game. Miromanov was tied for the team lead with five shot attempts, according to the website Natural Stat Trick.

He also balanced out the Knights’ pairs because he’s a right shot. Defenseman Alec Martinez, a lefty, had to play on the right the last two games with a right shot in Pietrangelo out.

Goaltender Adin Hill, 0-2-1 in his last three starts with an .861 save percentage, put in a solid performance to earn his sixth win Saturday.

Hill finished with 24 saves. He allowed one goal for the first time since Oct. 30, and for the second time in nine starts.

“I thought we were great tonight,” Hill said. “I thought we did a good job with our puck management and keeping their chances to a minimum, to the outside.”

His counterpart, Detroit’s Ville Husso, continued to struggle against the Knights, allowing three goals on 24 shots. Husso is 0-5 with a .850 save percentage in five all-time meetings.

McNabb called Miromanov “awesome,” but he wasn’t bad himself.

The 31-year-old played a team-high 22:13 and tallied two assists, three hits and four blocked shots. It was McNabb’s first multipoint game of the season.

He was also nearly a one-man penalty kill. McNabb had a 1:43 shift after Martinez was called for tripping with 8:36 left in the third period. The Knights allowed two shots but got the kill.

“He’s one of those guys that does everything well, but he doesn’t jump off the page,” Cassidy said.