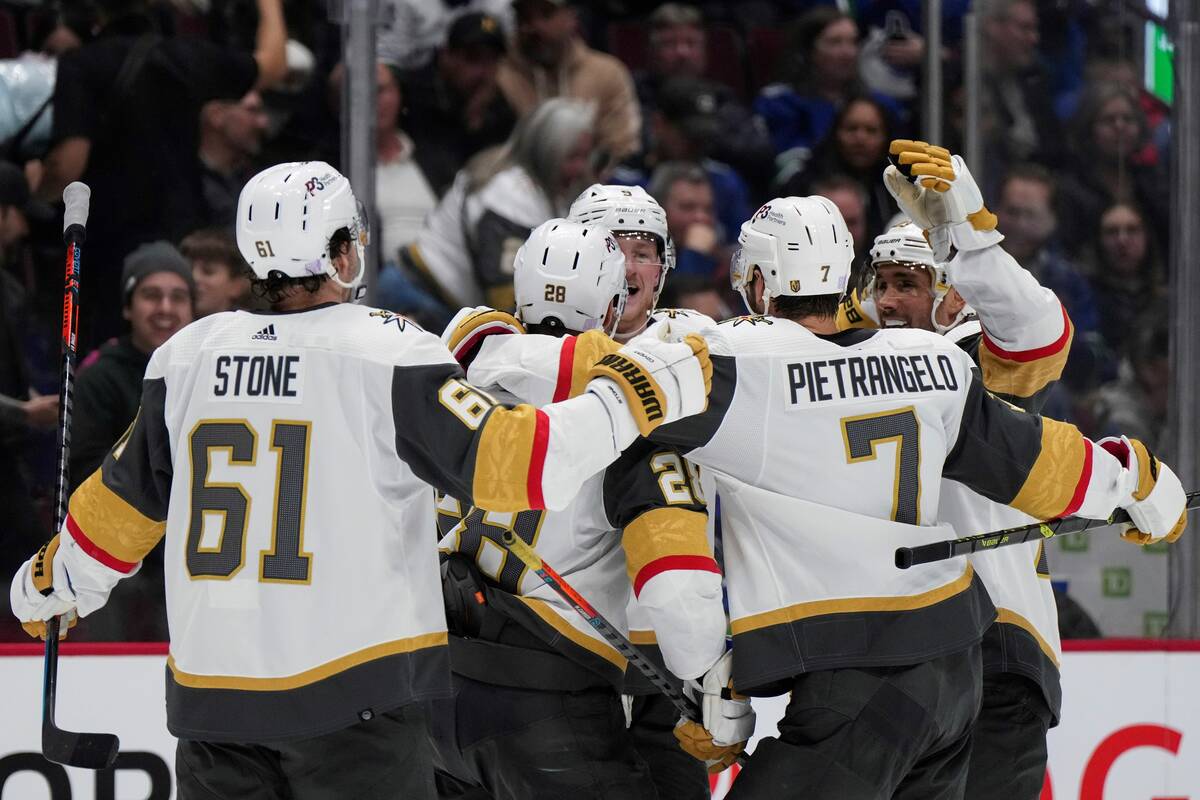 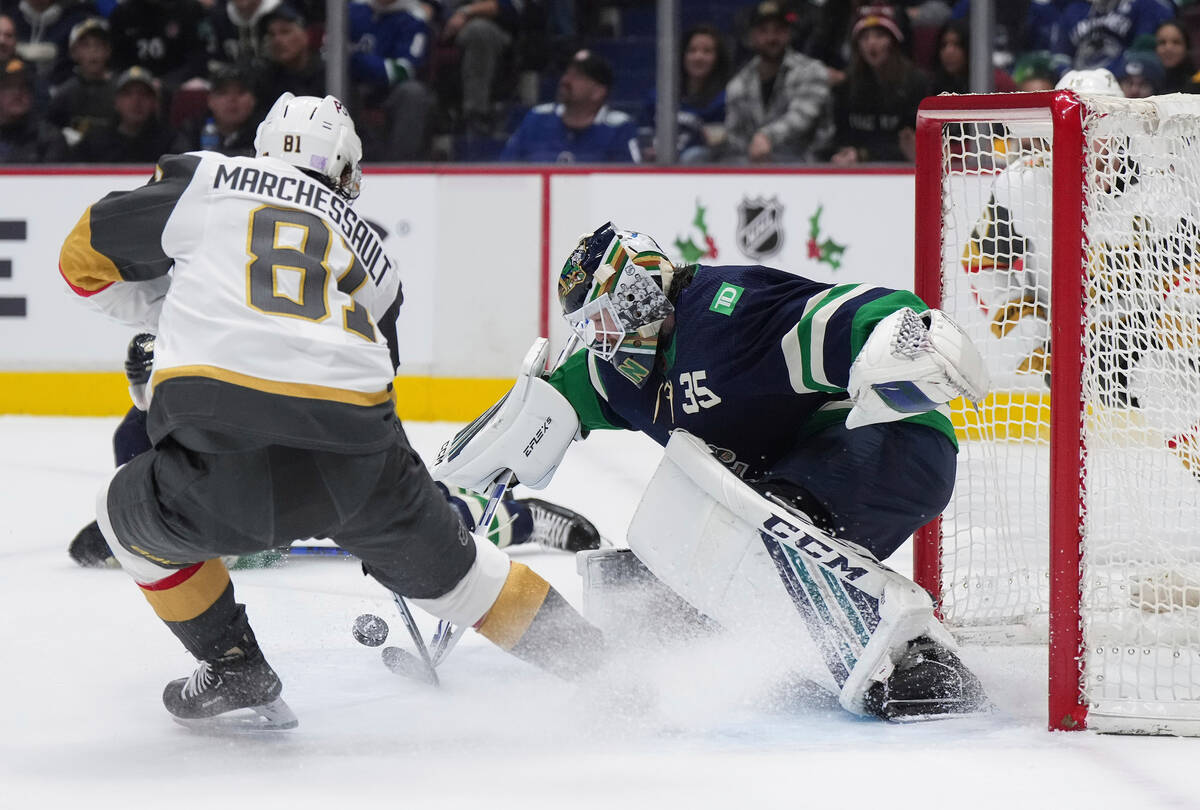 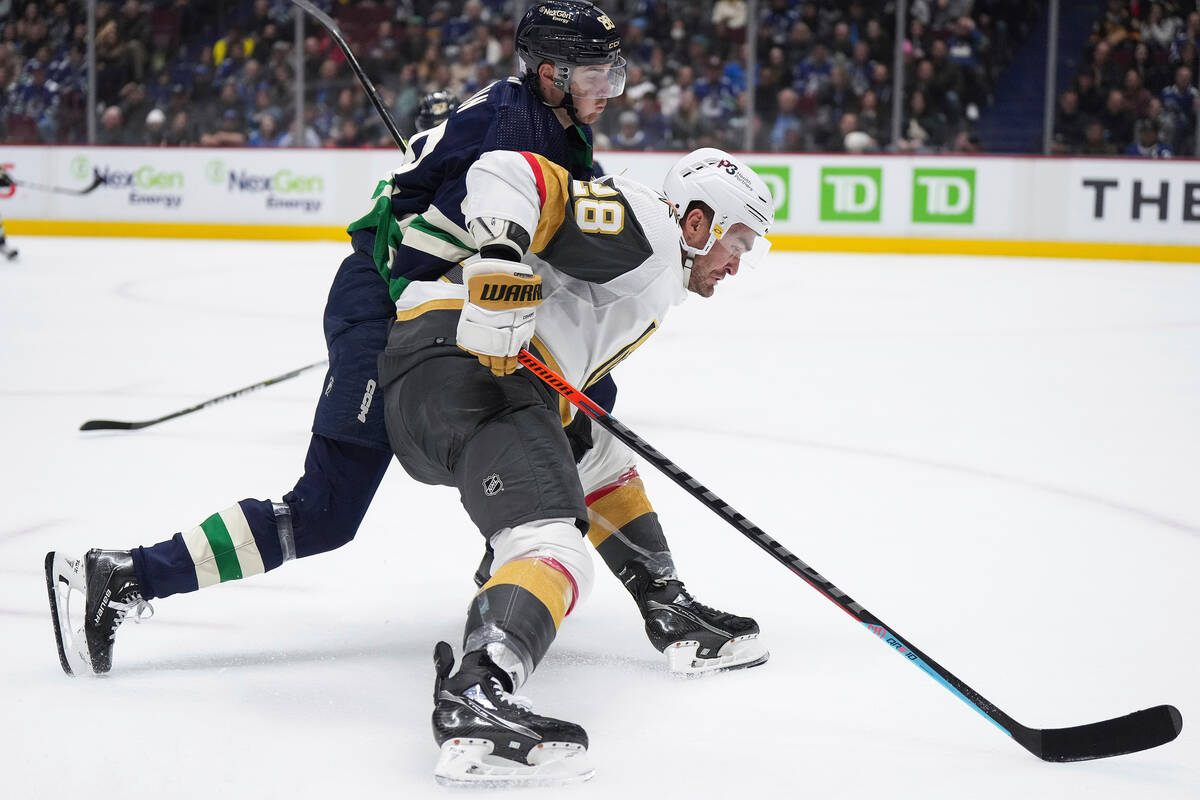 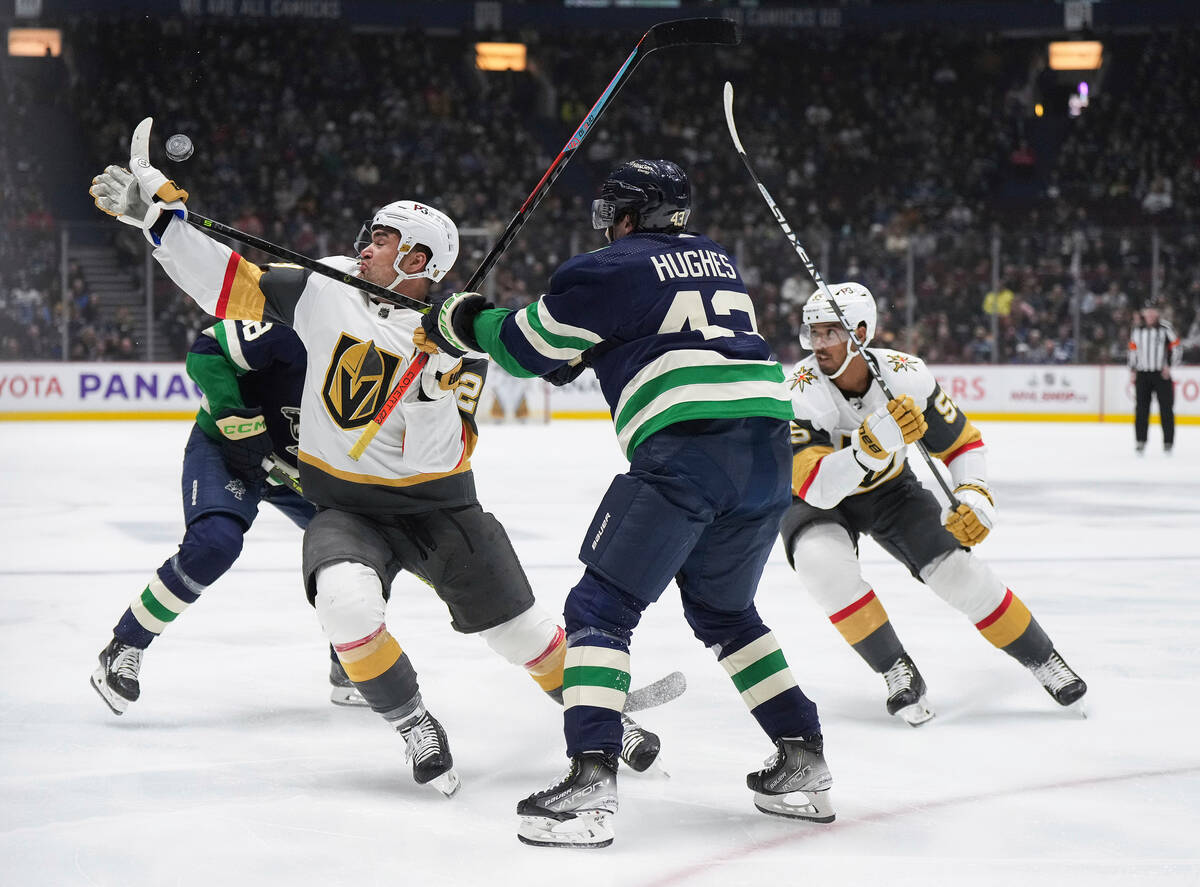 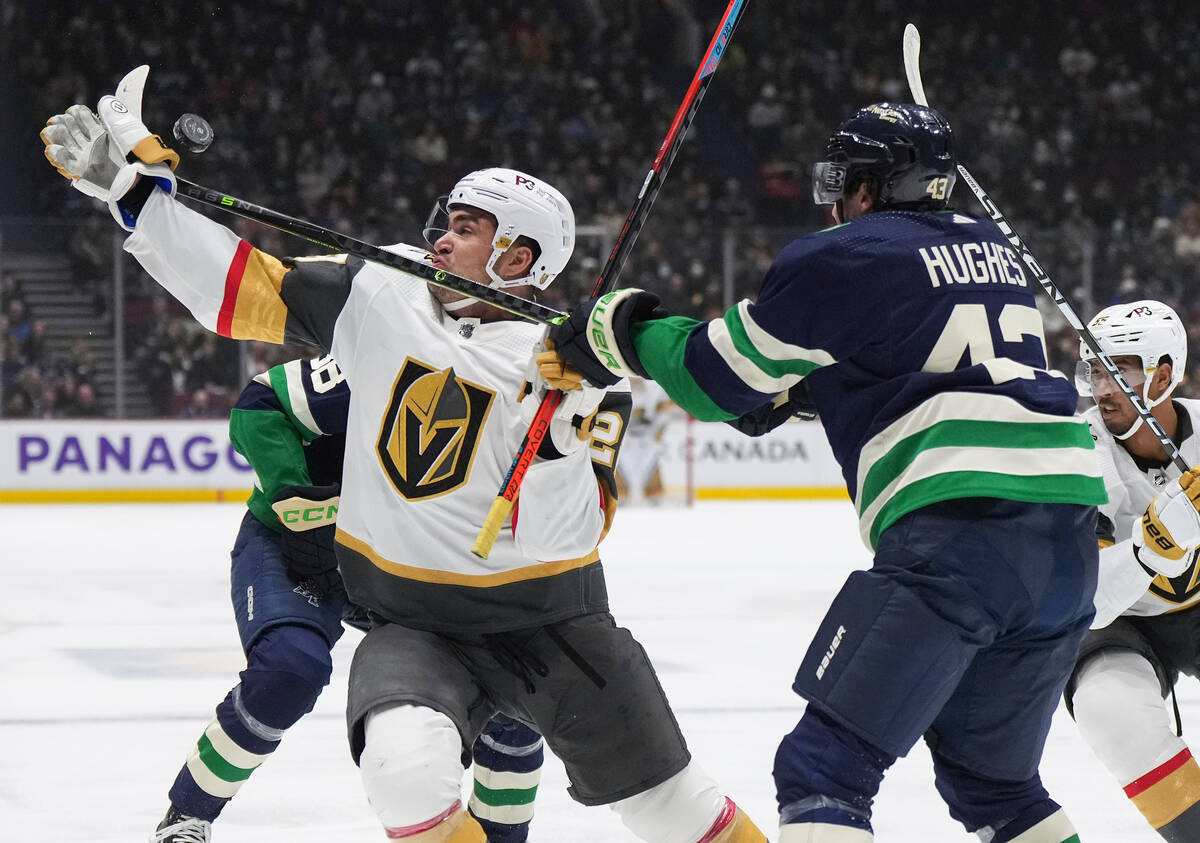 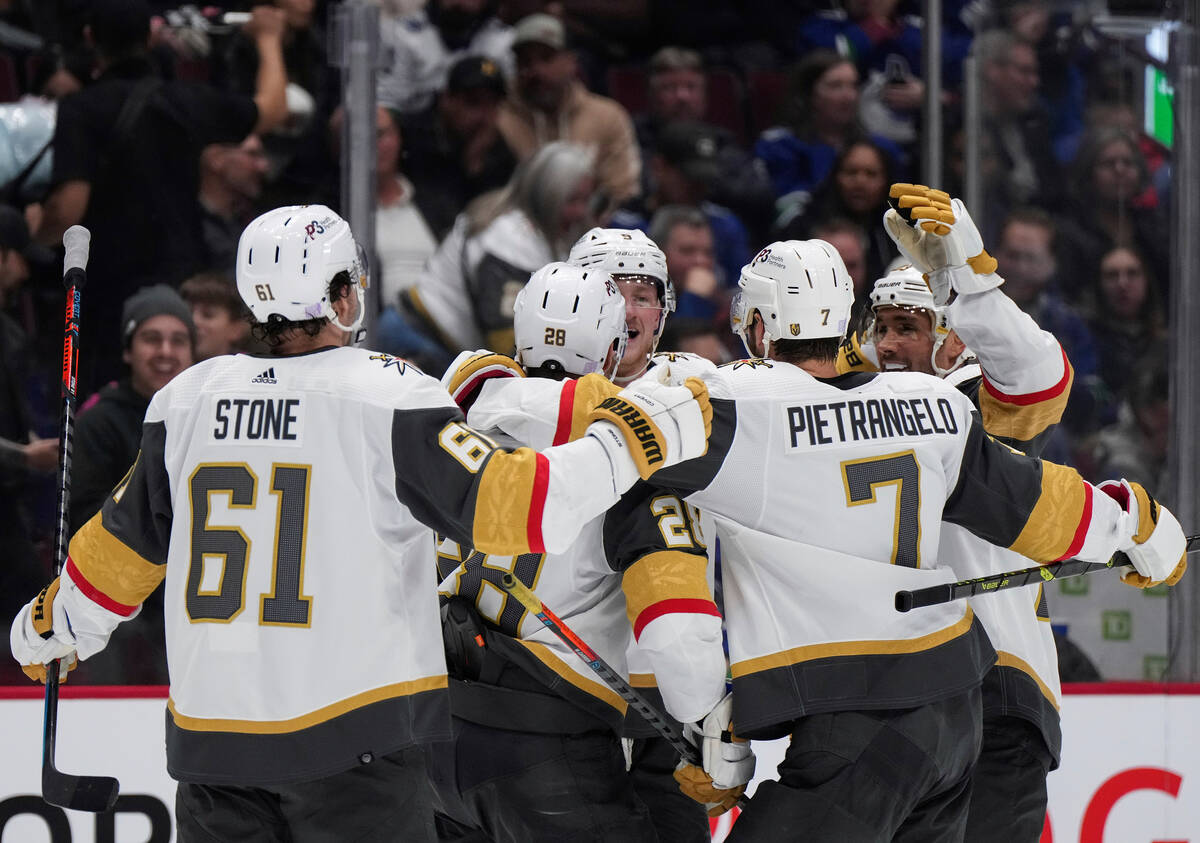 The camera lens on the ice was only part of the insanity of Monday’s third period.

The Golden Knights were leading 2-1 against the Vancouver Canucks at Rogers Arena heading into the second intermission. They still led by one when the game was over. But it took the wildest journey imaginable to get there.

The Knights and Canucks combined for six third-period goals, multiple blown leads and enough twists and turns to fill out a mystery novel in the game’s final 20 minutes.

One go-ahead goal was overturned because the puck hit a camera and officials determined play should have been stopped. Defenseman Alex Pietrangelo scored another one instead with 5:46 remaining, giving the Knights a 5-4 victory to close out their two-game road trip.

“It doesn’t matter what the score and time is, it feels like as a group on the bench we never think that we’re out of it,” center Jack Eichel said. “That just goes to show the belief we have in each other.”

The win looked for a while like it would escape the Knights’ grasp. Their 2-1 lead turned into a 4-2 deficit only 6:11 into the third period.

Center Bo Horvat, defenseman Luke Schenn and center Elias Pettersson scored for the Canucks, who have never defeated the Knights at home in regulation in eight meetings. Vancouver once again proved incapable of closing out its opponent.

Left wing William Carrier scored his second goal 43 seconds after Pettersson scored to get the Knights back within one quickly. Left wing Reilly Smith tied the game back up 2:03 later.

Captain Mark Stone appeared to put the Knights back ahead with his second goal, only for Canucks coach Bruce Boudreau to challenge because puck hit a camera in the corner of the zone earlier in the play and knocked a lens to the ice. Knights coach Bruce Cassidy said it was “a play that I’ll probably never see again in my life in the National Hockey League.”

The league took the goal off the board because it said the play should have been blown dead once the puck hit the camera.

It cited rule 85.1 in its explanation, which states: “When a puck goes outside the playing area at either end or either side of the rink, strikes any obstacles above the playing surface other than the boards or glass, causes the glass, lighting, timing device or the supports to break, it shall be faced-off at the nearest face-off spot in the zone from where it was shot or deflected out of play.”

Stone said after the game he wasn’t surprised by the decision.

“Once I realized what happened I kind of figured it was coming,” Stone said. “I would’ve wanted the same call for us.”

Stone played a hand in the game-winner anyway by setting up Pietrangelo’s go-ahead goal 4:20 after his tally was taken off the board. Pietrangelo finished a game-high three points, giving him 20 on the season. That’s tied for the third-most among NHL defensemen.

Stone, Carrier, center Jack Eichel and defenseman Alec Martinez each had two points, with Carrier recording the first two-goal game of his career.

The comeback was the Knights’ fifth in the third period this season, tied for the most in the NHL.

“Resiliency is there,” Stone said. “Let them off the hook a little bit, but we found a way to get it done.”

The third-period insanity overshadowed a two-goal shift from Eichel in the second.

The Knights trailed 1-0 when Eichel fired a long shot that deflected off Stone and into the net with 5:08 remaining in the second period. The team had another goal before Eichel reached the bench. He created space for himself in the right circle 49 seconds later. This time his shot went off Carrier and into the net to give the Knights a 2-1 lead.

The two assists give Eichel 24 points, tied for the 11th-most in the NHL.

“He has the ability to just take over the game with his size and skill,” Stone said. “You’re trying to defend him and when he’s got that puck reached out, you can’t get it from him. I don’t care who you are.”

It was a significant accomplishment for the Knights’ all-time leader in games (375), goals (129), assists (176) and points (305). The 31-year-old was undrafted and had to fight for all of his opportunities. Marchessault transformed himself into an All-Star and one of the Knights’ most consistent players.

“I played 300 in the (American Hockey League) so it’s been a rocky career a little bit,” Marchessault said Monday morning. “I feel like I have a lot of juice left.”

The Canucks nearly had a breakthrough in the first period when right wing Curtis Lazar jammed the puck into the net with 6:13 remaining.

The goal didn’t hold up long. Cassidy challenged the play was offside and was successful. He’s 2-for-2 on challenges this season, and the Knights are 8-for-8 the last two years thanks to video coach Dave Rogowski.

The team last failed to overturn a call May 26, 2021, against Minnesota.