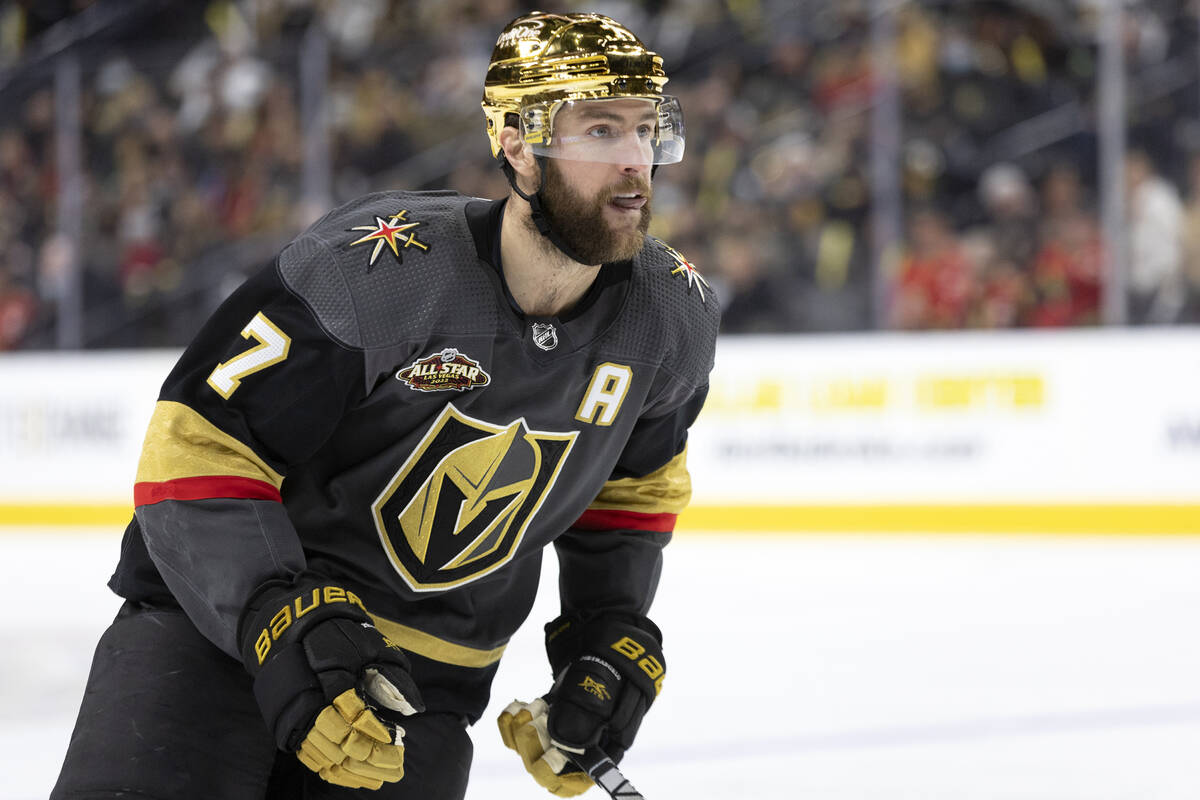 Golden Knights defenseman Alex Pietrangelo (7) eyes the puck during the second period of an NHL hockey game against the Ducks at T-Mobile Arena on Friday, Dec. 2021 in Las Vegas. (Ellen Schmidt/Las Vegas Review-Journal) 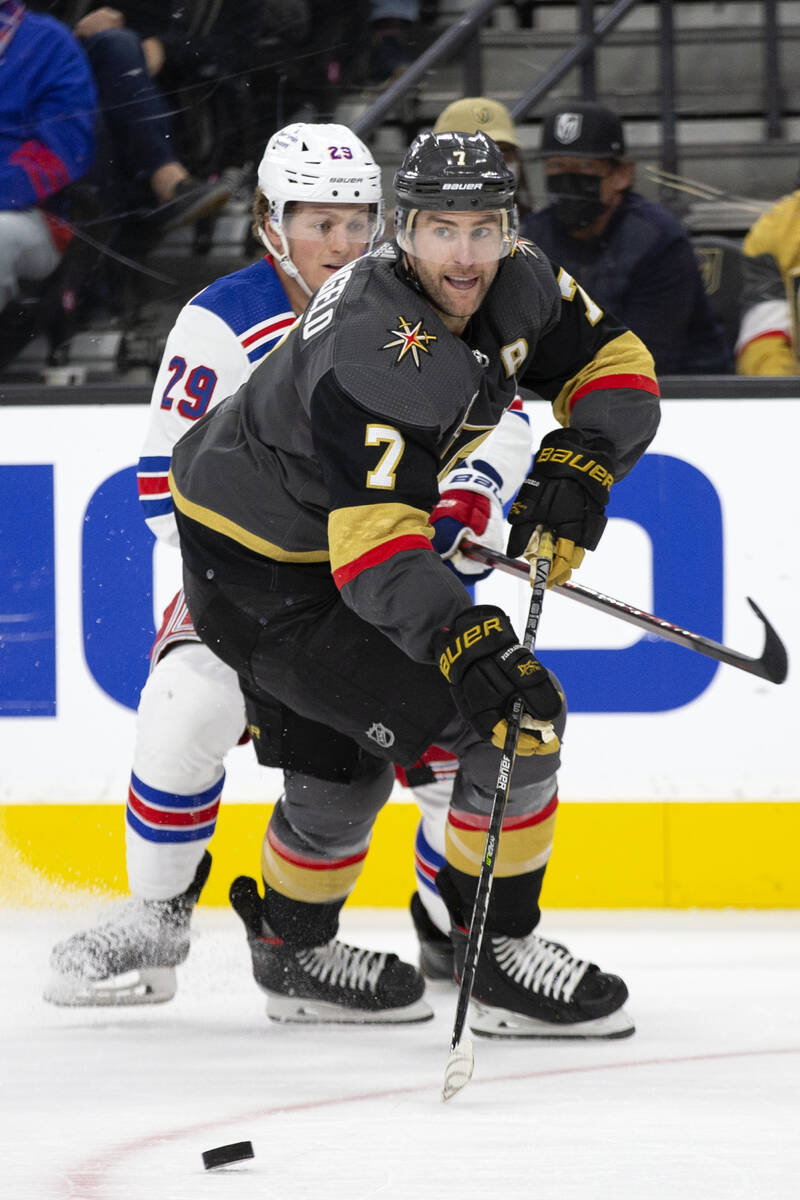 Golden Knights defenseman Alex Pietrangelo (7) passes up the ice while Rangers left wing Dryden Hunt (29) skates after him during the second period of an NHL hockey game at T-Mobile Arena on Thursday, Jan. 6, 2022 in Las Vegas. (Ellen Schmidt/Las Vegas Review-Journal)

Alex Pietrangelo was on the ice for exactly half of the Golden Knights’ game Tuesday, with the defenseman tying for the team lead in shots on goal while helping to slow Toronto’s dynamic offensive attack.

In most instances, he would be widely praised and touted as a midseason Norris Trophy candidate after a performance that included the game-tying goal on a power play in the third period.

And yet the underlying numbers for Pietrangelo from that night paint a different picture as he focused on defending his own end.

The Knights gave up slightly more expected goals than they generated with Pietrangelo on the ice at five-on-five and allowed the Maple Leafs twice as many high-danger chances (4-2), according to NaturalStatTrick.com.

It’s been that way since the start of the season, with Pietrangelo’s advanced statistics not matching up to the significant contribution he’s made for the first-place Knights (23-14-2, 48 points).

“We’ve leaned on him really heavily here early with the injuries and COVID we’ve dealt with,” coach Pete DeBoer said. “He’s responded. A lot of nights, if not most nights, he’s been our best player.”

The blue line has been decimated by injuries and COVID during the first half of the schedule, as Alec Martinez missed the past two months and Nic Hague remains sidelined with a balky wrist. Shea Theodore missed the game against Toronto because of COVID protocol.

Pietrangelo has tried to pick up the slack. He ranks tied for fifth in the NHL in average ice time per game (25:54) with Chicago’s Seth Jones, and his 0.65 points per game is the third-highest of Pietrangelo’s career.

“For most players, the more you play, the more confident you’re going to feel,” Pietrangelo said Saturday. “Obviously, last game they needed that from me, and I kind of knew that going in, so I was able to put myself in positions throughout the game. Maybe not force the issue, but just wait for my opportunities and be a little more patient.”

But Pietrangelo hasn’t been mentioned with the other top defensemen this season because, oddly, many of his other statistics don’t stack up.

Pietrangelo tried to do more offensively early in the season to make up for the Knights’ absences up front and often found himself caught up ice. As a result, the Knights have given up more scoring chances and high-danger chances than they’ve generated during Pietrangelo’s shifts, and he’s been on the ice for as many goals scored as allowed at five-on-five.

The Knights are allowing 2.77 expected goals against per 60 minutes with Pietrangelo on the ice, third highest on the team among regulars. His expected goals-for rate of 49.8 percent ranks ahead of only Martinez and Hague, according to NaturalStatTrick.com.

Still, Pietrangelo continues to spearhead the defense for the team on top of the Pacific Division and was named to his third All-Star Game on Thursday.

Entering Saturday, he was tied with Florida’s MacKenzie Weegar for the league lead in takeaways and ranked seventh in blocked shots.

“We need people to step up, and throughout the whole season, Petro’s been one of our best players,” goalie Robin Lehner said. “Obviously, he’s one of the best defensemen in the world.”