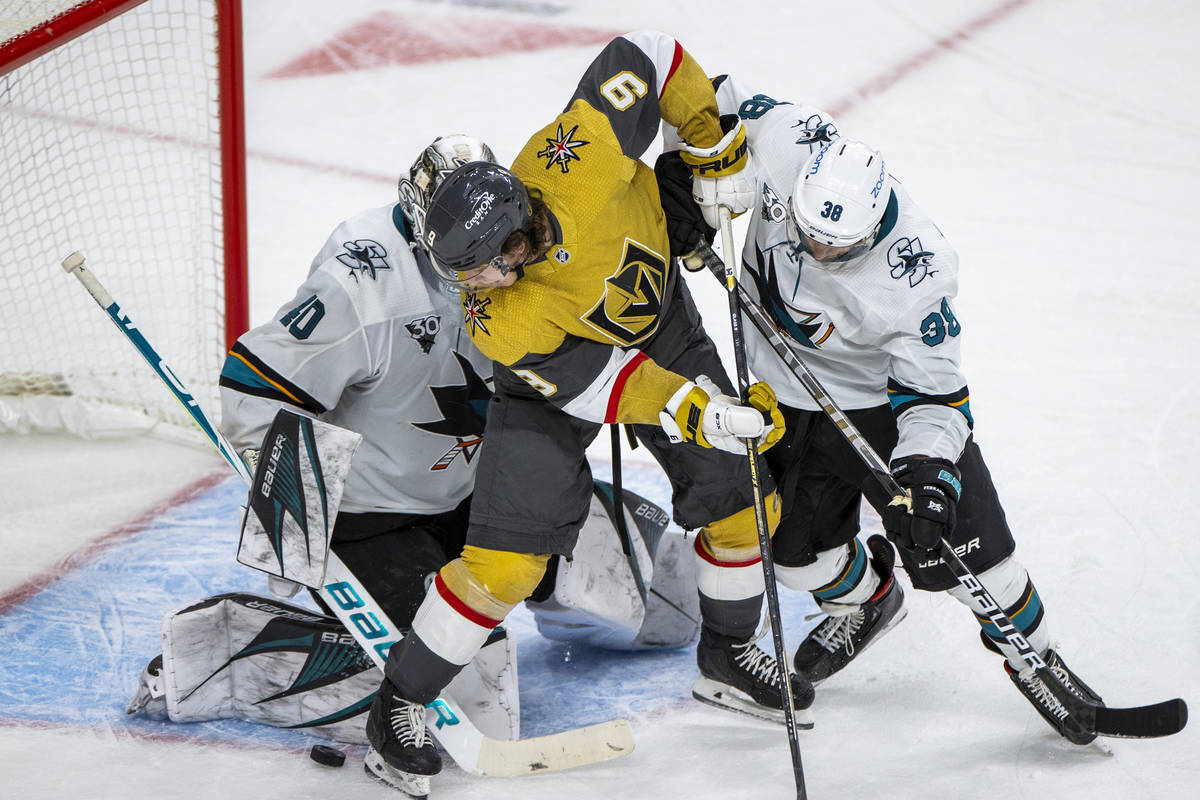 Golden Knights center Cody Glass (9) looks to get the puck into the net past San Jose Sharks goaltender Devan Dubnyk (40) during the third period of an NHL game at T-Mobile Arena on Wednesday, March 17, 2021. (L.E. Baskow/Las Vegas Review-Journal) @Left_Eye_Images

ST. PAUL, Minn. — While the Silver Knights compete in the postseason, Cody Glass is waiting for his chance with the Golden Knights.

Glass was called up from the American Hockey League club after Tomas Nosek was injured in Game 2 of the West Division first-round playoff series, but was a scratch for both games against the Minnesota Wild at Xcel Energy Center.

“For me, the message to him going down was just get used to playing in those offensive situations and scoring and creating offense, because that’s what he’s going to be at this level,” coach Pete DeBoer said. “It’s tough down the stretch for young guys to do that. I think he went down there and did that. Now he’s just got to wait for an opportunity when it arises here.”

Glass, the team’s first-round pick in 2017, struggled to generate offense at five-on-five during his time in the NHL and was sent down to the Silver Knights for the second time April 13 to help build his confidence.

In the 13 games with the Silver Knights, he posted three goals and six assists with a plus-1 rating. Glass had five or more shots on goal in seven of those games before he was recalled Wednesday.

With Nosek unavailable, DeBoer opted to use Nicolas Roy as the third-line center and went with veteran Patrick Brown on the fourth line for Game 3. The forward group remained unchanged for Game 4 on Saturday.

Glass, who has yet to appear in an NHL playoff game, scored all four of his goals during the regular season on the power play. The Knights went 1-for-10 with the man advantage in the first three games of the series.

DeBoer said he was able to see several games Glass played with the Silver Knights on TV.

“I liked what I saw,” DeBoer said. “I think most of the games I watched, he was a factor.”

Brown hadn’t played since April 3 after tearing his hamstring in a game against Minnesota, and it took a bit of time in Game 3 to gain chemistry with linemates William Carrier and Ryan Reaves.

Brown notched the tying goal with a little less than five minutes remaining in the second. But earlier in the period, he absorbed a hard hit in the neutral zone from none other than Carrier, who poked fun at himself Saturday after morning skate for taking out his teammate.

“For me, I’ve just got to stop hitting him,” Carrier said. “That time I hit him was probably not the best play.”