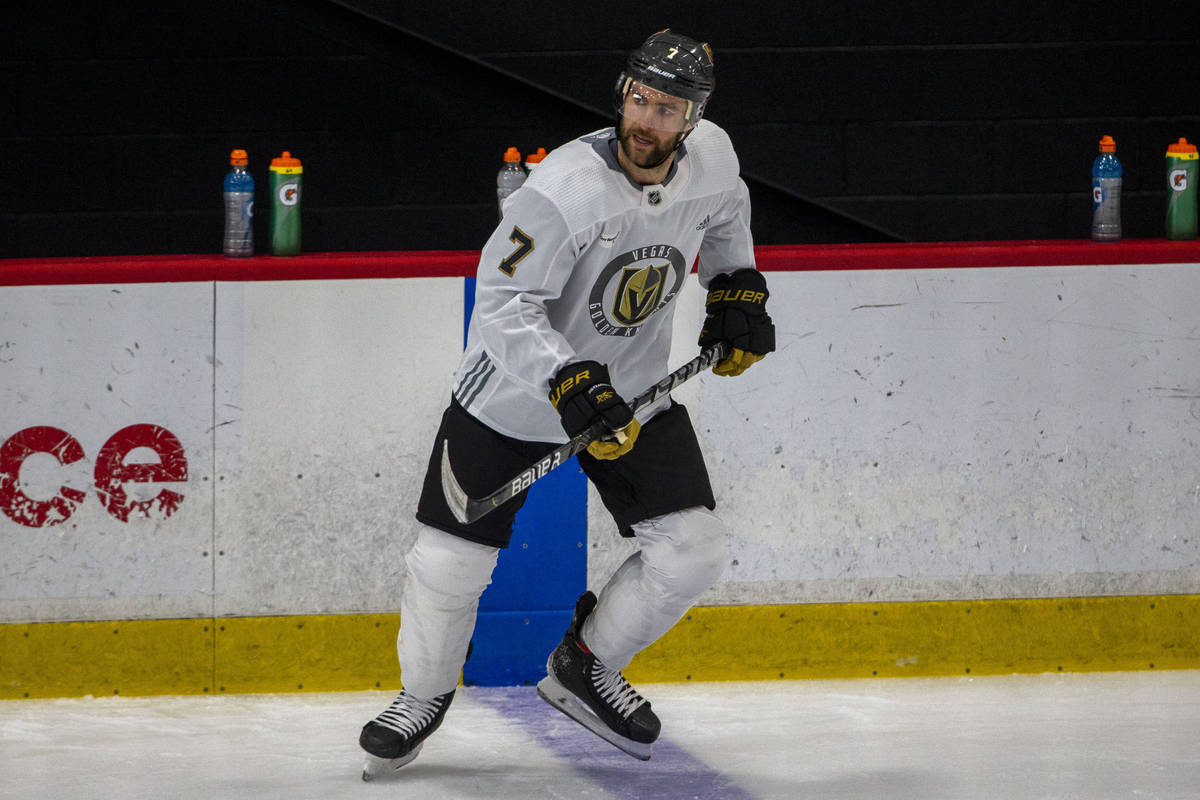 But the defenseman has to wait a little longer before he can return to the Golden Knights’ lineup.

Pietrangelo was scratched for the third straight game when the Knights hosted the Anaheim Ducks at T-Mobile Arena after he participated in the optional morning skate.

Pietrangelo is expected to return when the teams meet again Thursday to close out the two-game series. Defenseman Dylan Coghlan was recalled from the taxi squad on an emergency basis.

“I think after (Tuesday) he will be (an option),” coach Pete DeBoer said after the morning skate. “It’s just based on protocol. This isn’t about letting him get up to speed. I think even at half speed we’d take him in the lineup if he’s available.”

Pietrangelo had been in NHL COVID protocols since Jan. 28, and DeBoer let it slip Monday that Pietrangelo was dealing with a positive test.

The NHL’s protocols for a positive test state that a player can exit the isolation period after 10 days or two negative tests, but must refrain from exercise for 14 days from the time of the first positive test.

Players who remain asymptomatic and test negative after isolating can be permitted by the team physician to start “low grade exercise” before the end of the 14 days, which could explain Pietrangelo’s appearance Tuesday morning.

In order to return to game activity, the protocols state that players must be cleared by a cardiologist and team physician.

There were no Knights players included on the league’s COVID protocol-related absences list Tuesday. General manager Kelly McCrimmon said last week a member of the taxi squad also was in protocol, but he was not required to disclose the player’s name.

Forward Gage Quinney has not practiced with the team since it returned to practice Feb. 3.

The Knights announced last month they were wearing their reverse retro jerseys when they played outdoors in Lake Tahoe, and it was presumed that would be the debut of the red uniform.

Apparently the team couldn’t wait to show off the fourth jersey and unveiled it against the Ducks.

“They’re pretty nice,” center William Karlsson said. “I like the color red, and I like the design from the (Las Vegas) Thunder, Wranglers. It’ll be cool.”

The coaching staff wore warmup suits at the morning skate that matched the uniforms, similar to when the Knights wear their gold jerseys. The latest ensemble included a red pullover.

“Yeah, this’ll wake you up in the morning. It sure pops, that’s for sure,” DeBoer said. “They’re great. It’s actually been the highlight of my week, coming in every morning and seeing what color tracksuit we’re wearing today and what color hat.”

Marc-Andre Fleury won his first four starts, and the 36-year-old goaltender looked as sharp as he had at any point in his time with the Knights.

“That’s one thing I always notice when I see him without his shirt is how shredded he is,” Karlsson said. “I think he takes care of his body, and that’s what makes him able to stay at this level at that age.”