The Western Conference quarterfinal against the Chicago Blackhawks has been a polite gathering with hardly an ounce of bad blood between the clubs. (Angus Kelly/Las Vegas Review-Journal) 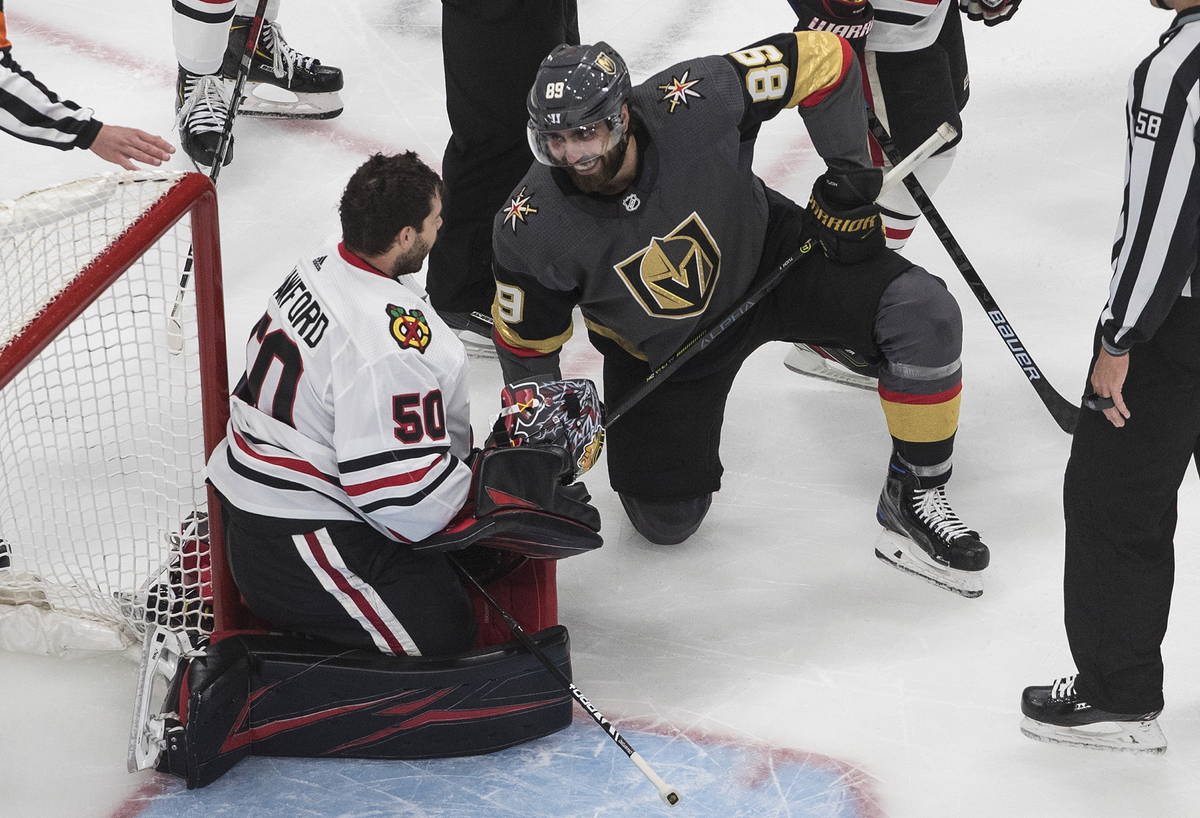 The Golden Knights have been involved in some heated playoff series during their brief existence.

By comparison, the ongoing Western Conference quarterfinal against the Chicago Blackhawks has been a polite gathering with hardly an ounce of bad blood between the clubs.

The best-of-seven series continues with Game 5 on Tuesday at Rogers Place in Edmonton, Alberta. The Knights lead the series 3-1.

“I wouldn’t say it’s as intense as the (Los Angeles) series or one of the San Jose series, but, I mean, it doesn’t matter,” left wing Jonathan Marchessault said. “I think it goes to the style of play of Chicago. They’re a team that likes to generate a lot of speed in the neutral zone. They’re not as physical.”

The Knights’ first playoff series against Los Angeles in 2018 had the added spark of Kings defenseman Drew Doughty’s inflammatory comments that were made during the regular season.

The rivalry with San Jose was born that inaugural season and boiled over in last season’s quarterfinal series as the teams traded barbs in the media and punches on the ice.

But there’s no such rivalry with the Blackhawks, who play in the Central Division and meet the Knights three times a season. This is the first time the clubs have hooked up in the postseason.

The series is the least penalized in the NHL through four games, with the teams averaging a combined 10 penalty minutes per game. Other than Marchessault mixing it up with Chicago captain Jonathan Toews in Game 1, there’s hardly been so much as a shove after the whistle.

”At the end of the day, personally I think we’re worried about our team,” Marchessault said. “If we hit some less physical teams, more physical teams, I don’t think it matters. I think we can accept the challenge and can respond well as a group.”

Forwards Paul Stastny and Tomas Nosek are day to day, and their status for Game 5 will be determined after Tuesday’s morning skate, coach Pete DeBoer said.

Stastny and Nosek were “unfit to play” the past two games, DeBoer said.

DeBoer also kept his starting goalie confidential. Robin Lehner lost for the first time in a Knights uniform Sunday, while Marc-Andre Fleury flirted with a shutout in Game 3 in his only appearance of the series.

“We’re going to talk to the players, across the board, not just in net, and we’ll have a lineup (Tuesday),” DeBoer said. “How we make that decision, honestly, it’s just what we feel as a coaching staff gives us the best opportunity to win a game that night. That’s the only motivation, that’s the only agenda that goes into the decisions that we’re making.”

The Knights have organized several activities to stay occupied between games, including movie night, cornhole and a poker tournament.

Nick Cousins said one of the most recent events was a “Mario Kart” tournament on Nintendo 64, and he admitted he crashed out early.

“You know who is really good is actually Ryan Reaves,” Cousins said. “I feel like you can’t tell him I said that because it’ll go right to his head, but he was actually my partner and he carried us for a little bit. He was Donkey Kong, and he was lights out.”