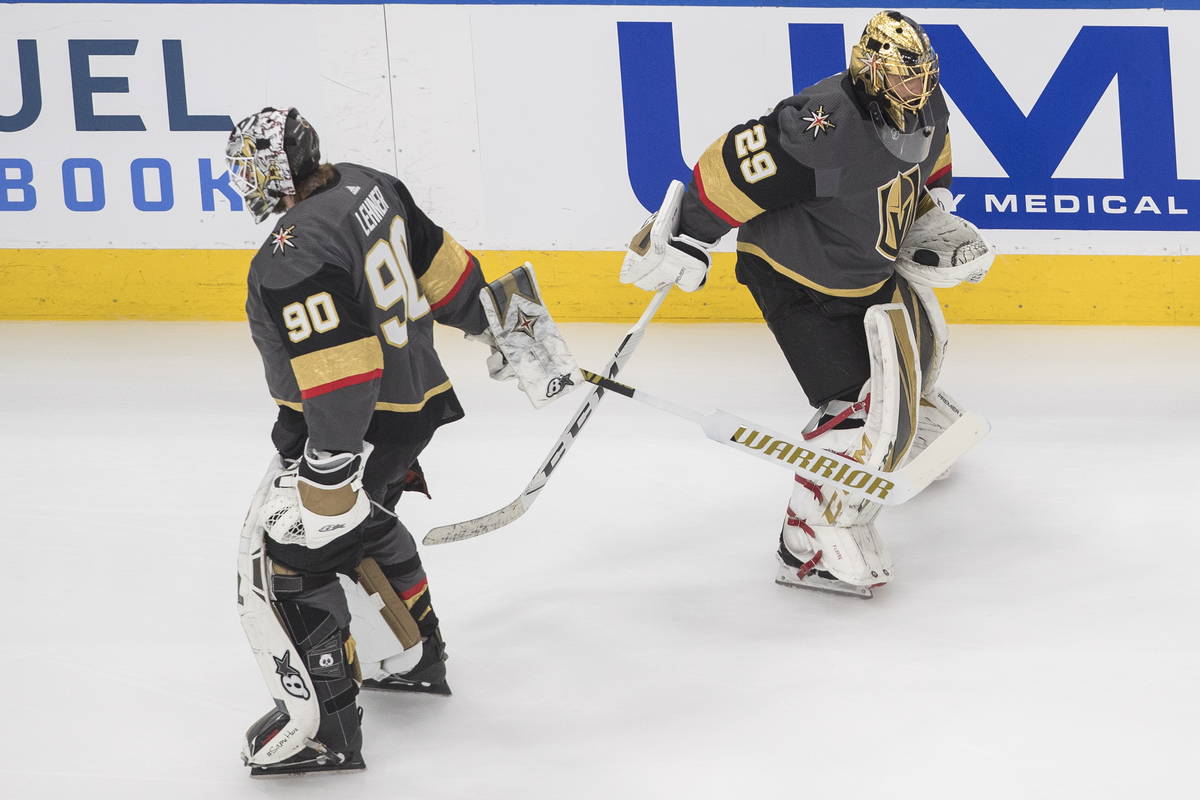 As the backup goalie that night, Lehner watched from the bullpen on the opposite side of the ice near the team’s locker room, which is customary with no room on the bench in San Jose, California. He waited for the doors to open and then skated toward the crease where the rest of his teammates were congregating.

Once there, Lehner greeted Marc-Andre Fleury with pat on the head and said something into his goalie partner’s ear. Then Lehner added a tap on the chest before the two shared a high-five.

“Behind the scenes, me and Fleury, we’ve turned into pretty good friends,” Lehner said. “Whoever goes in net, we support each other.”

The identity of the Knights’ starting goalie for Game 1 of the first-round playoff series against Minnesota remained a closely guarded secret, as coach Pete DeBoer did not reveal who would oppose the Wild’s Cam Talbot on Sunday at T-Mobile Arena.

Most signs pointed in one direction. But regardless of who DeBoer selects, there’s peace and harmony in the Knights’ crease.

That’s a far cry from last season, when the Knights entered the playoff bubble with a simmering goalie controversy that boiled over and spilled into the offseason.

“We don’t win the Jennings Trophy (for fewest goals allowed), we don’t have the record we have without having the best tandem in the league,” DeBoer said Saturday. “What that rolls out to in the playoffs, I’m not going to tip my hand. And to be honest with you, I’m not even sure I know. But one thing I do know, I’m not going to hesitate to use that strength.”

Fleury is the NHL’s active leader in postseason wins, and the three-time Stanley Cup winner posted career bests in goals-against average (1.98) and save percentage (.928) while going 26-10 with six shutouts during the regular season.

He finished on a nine-game winning streak and didn’t allow more than two goals in any of those starts.

The 36-year-old ranked fourth in goals saved above average (20.12) by NaturalStatTrick.com, and his .722 quality start percentage was second in the league, according to HockeyReference.com.

Lehner may have made his concession speech for the No. 1 job Thursday when he posted on his Twitter account he believes Fleury should win the Vezina Trophy as the league’s top goaltender.

It’s an honor to be able to play with and get to know Marc. A fun prize for us to win together with the hard work of our entire team. Been really cool to see the special season Marc have had and I believe that’s where the Vezina belongs. Now the fun begins! pic.twitter.com/XwfIiZijDu

Since he returned from a concussion, the Knights have alternated starts between Lehner and Fleury almost exclusively. The only time DeBoer went away from that was the series at Colorado on March 25 and 27 when Fleury started both games.

“When we did our prescout stuff here this morning with the group, clearly we are chatting about both goaltenders and how we believe that we can have success against them,” Minnesota coach Dean Evason said. “But that’s not a lot different than any other preparation for any other series is that you have to be aware of either goaltender that goes in. Hopefully we’ve got a good handle on that.”

The last team to win the Stanley Cup alternating starts between goaltenders was the Boston Bruins in 1971-72 when Gerry Cheevers and Eddie Johnston shared the load.

No matter who starts Sunday, it’s possible Fleury and Lehner both will see game action if the Knights make a deep run.

In recent years, Washington used two goalies on its way to winning the Stanley Cup in 2018. The Penguins turned to Fleury and Matt Murray to win back-to-back titles in 2016 and 2017 when injuries hit.

“We’ve got great goaltending all year from both guys,” DeBoer said, “and we’re going to need both guys in the playoffs, too.”