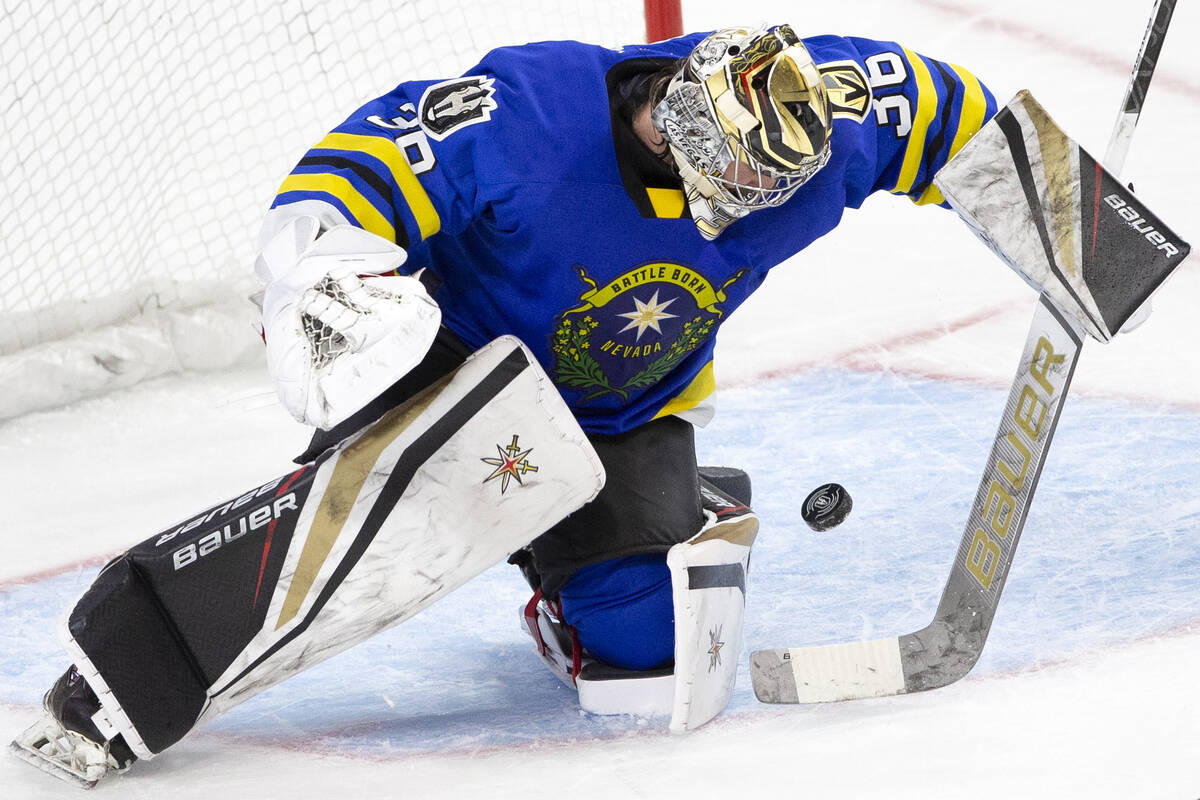 Henderson Silver Knights goaltender Logan Thompson (36) is about to make a save during the third period of an AHL hockey game against the Bakersfield Condors at Orleans Arena on Friday, Oct. 29, 2021, in Las Vegas. (Ellen Schmidt/Las Vegas Review-Journal) @ellenschmidttt 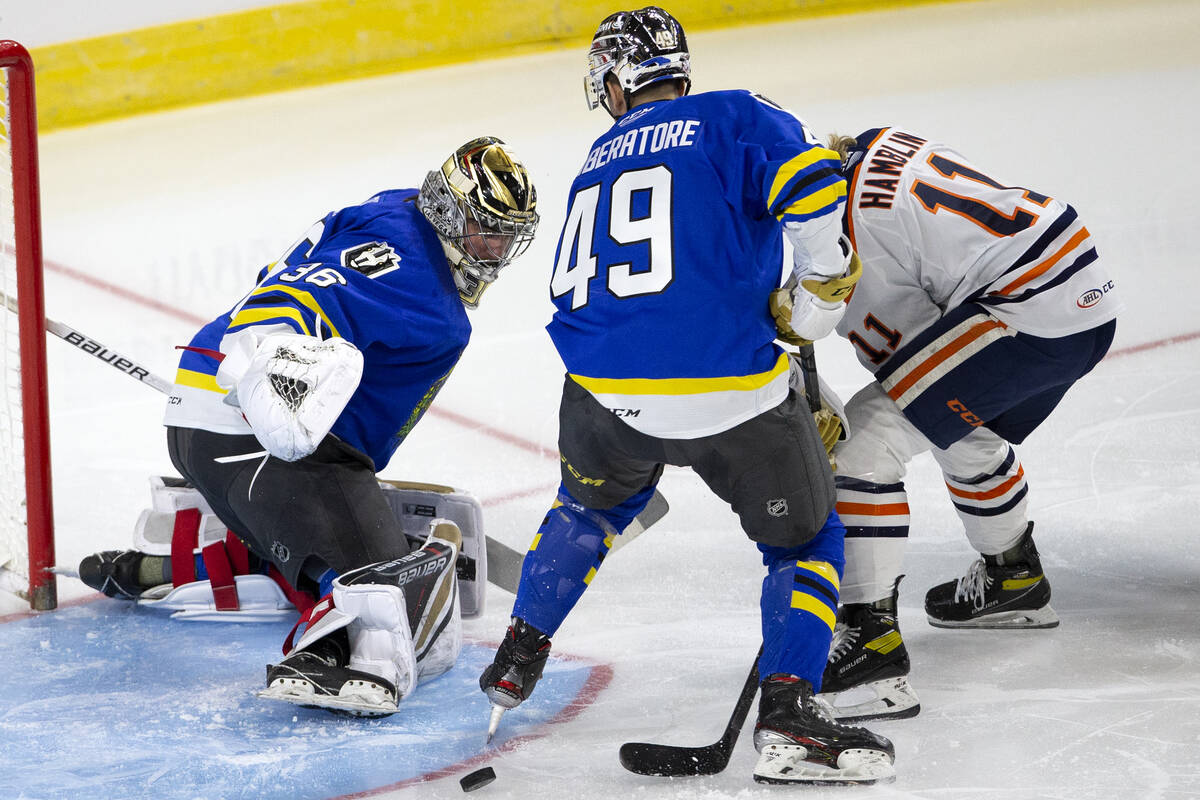 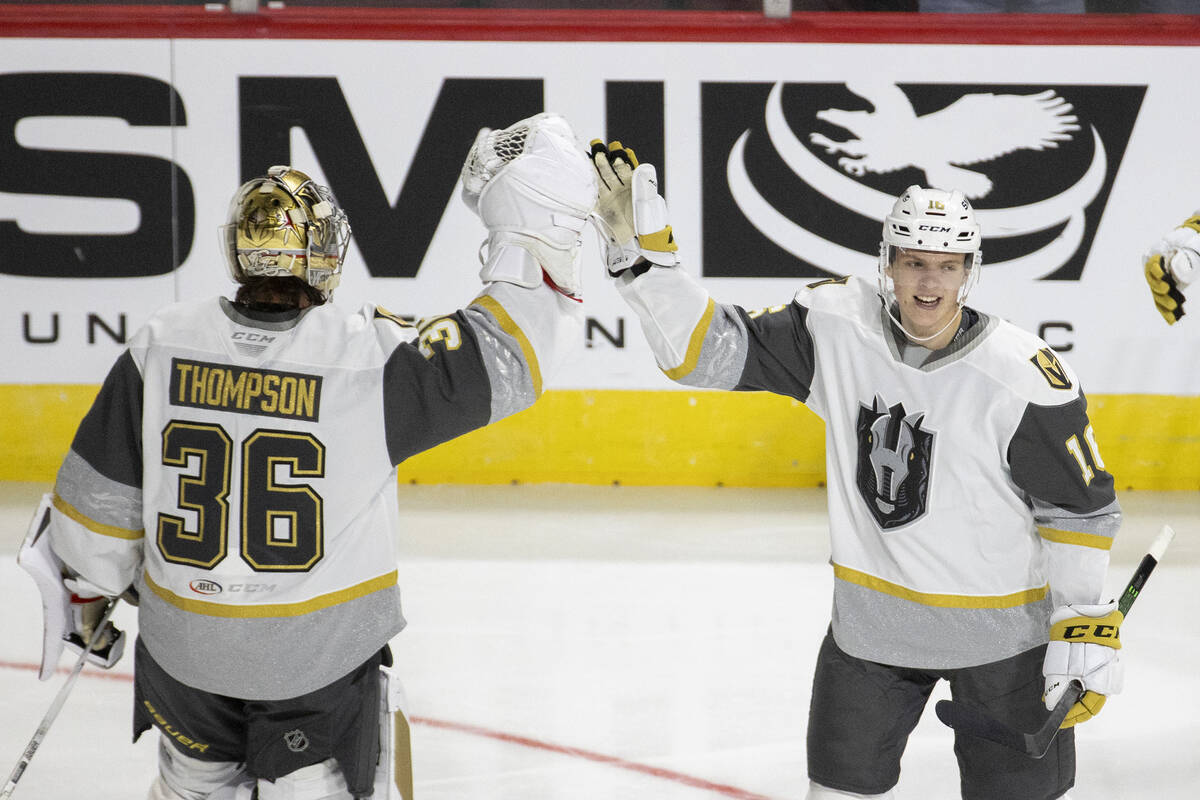 The American Hockey League’s best goaltender was sitting at home in the summer of 2020 waiting for his next opportunity.

Logan Thompson, passed over by NHL teams after his junior career with the Brandon Wheat Kings, took a rare path through Canadian college hockey to enter the professional ranks. Once there he had a strong season with the ECHL’s South Carolina Stingrays and decided to see what other teams would come calling.

Ultimately, a familiar face did. Golden Knights general manager Kelly McCrimmon, the Wheat Kings’ former GM and still owner at the time, wanted to know if Thompson wanted to come to Las Vegas. Thompson did. So much so that he hopped in his car and drove for 24 hours in the middle of a pandemic to show it.

The two-day, 1,500 mile-trip from Brandon, Manitoba — Thompson said he drove about 15 hours the first day before resting — was the first sign of the Silver Knights goaltender’s willingness to push through obstacles. Combined with his competitive spirit, it’s helped fuel his rise from overlooked to awards-worthy to potential NHLer.

A lot of goaltenders were given more opportunities than Thompson. Few can say they’ve done as much with theirs.

“I think that’s kind of what made me mad and lit a fire underneath me,” Thompson said. “I always have something to prove.”

The reason Thompson was passed over in his mind is simple. “My numbers were never sparkling,” he said.

In four seasons with the Wheat Kings, he never had a save percentage above .908 or a goals-against average below 2.63. Nothing that would pop off a page or cause a scout to take notice.

Thompson’s name was never called in the draft. Even a rookie camp audition with the Golden Knights for his former GM — he started the franchise’s first rookie camp game against Los Angeles — didn’t lead to anything. The message, as he took it?

He went to Brock University for the 2018-19 season, which led him to fall “in love with the game again.” He put up a .934 save percentage and led the Badgers to a school record in wins.

Former Brock coach Marty Williamson said in March he could tell Thompson was at a different level when he came to play for him. Thompson brought energy to each practice. He worked hard to save every shot in drills, even in the middle of the week when a game wasn’t coming until the weekend.

It’s something he’s never stopped doing. Thompson is so competitive he once fought during a game while with the Stingrays.

“I mean, a guy like him, he doesn’t like to lose,” Silver Knights goaltending coach Fred Brathwaite said. “He’s always competing against the other goalie at the other end. When he brings that energy to the rink, our guys feed off of that.”

U Sports, the national governing body of college athletics in Canada, isn’t considered a strong feeder system for the NHL. Most Canadian players with a professional future sign contracts out of junior hockey.

There are exceptions — Silver Knights assistant coach Joel Ward had an 11-year NHL career after playing for the University of Prince Edward Island — but they are few and far between.

Goaltender Robert Dopson from Wilfrid Laurier University made two appearances totaling 45:25 for the Pittsburgh Penguins in 1994. That was three years before Thompson was born. No other U Sports goalie played an NHL game afterward until March 12.

That’s when the Golden Knights were in Minnesota and Thompson was serving as their backup thanks to an injury to Robin Lehner. The game was tied 1-1 entering the third period, but Marc-Andre Fleury gave up three goals in the first 7:41 to fall behind 4-1.

Thompson could see the team’s coaching staff whispering to each other from his spot on the bench. He started to realize what that meant.

“I kind of looked the other direction,” Thompson said. “I didn’t really want to go in. I was nervous.”

Forty seconds of game time later, after a Knights icing, Thompson skated to the net for his NHL debut. He stopped both shots he faced in 8:15 and nearly received an unlikely win.

The Knights scored twice to make it 4-3 and right wing Alex Tuch nearly tied the game before the final buzzer.

“I got a chance (and) I was really thankful for it,” Thompson said. “It was exciting. Hopefully there’s more opportunities to come.”

Thompson’s first NHL action only came two months into his first season with the organization.

It didn’t take long for him to turn heads with the Silver Knights. He was 16-6-2 his first full AHL season with a 1.96 goals-against average and .943 save percentage.

The key? Not necessarily his glove hand or his post-to-post movement. Brathwaite said the first thing he noticed about Thompson was his determination.

“You haven’t been drafted,” Brathwaite said. “Now you’re getting this opportunity to go and prove that you belong. And I think that’s something that he’s doing right now is every day just working hard and trying to show everyone that he can play at this level.”

Thompson won the AHL’s goalie of the month award in February and March before being named goaltender of the year in June. Other winners of the year-end honor include current NHL goaltenders Jonathan Bernier, Jake Allen, Matt Murray, Alex Nedeljkovic and Kaapo Kahkonen.

The Silver Knights have needed Thompson more than ever this season. They’ve had injuries, call-ups and a four-game leave of absence by coach Manny Viveiros after he was diagnosed with prostate cancer.

Thompson hasn’t blinked despite the rotating cast around him. He has a .920 save percentage and 2.93 goals-against average while leading the league in shots faced (415) by 66.

Thompson doesn’t hope to stay one of the AHL’s best goalies forever.

He’s No. 3 on the Golden Knights’ depth chart and coach Pete DeBoer said in training camp he’d be confident if the team needed to turn to Thompson in an NHL game. When that time comes remains to be seen with Lehner and backup Laurent Brossoit healthy.

Brathwaite, who appeared in 254 NHL games, said he believes Thompson can play in the big leagues if he keeps working on his game and stays healthy. Thompson still can refine his skating and make sure he plays up to his 6-foot-4 frame consistently.

Thompson seems to have taken that message to heart. If he’s made it this far, what’s one more step?

“I just got to keep playing down here,” Thompson said. “I’ll keep getting that experience and keep taking steps in the right direction and doing what the goalie coaches want me to do and make a couple little adjustments to my game. I think if I keep doing that, I think there’s a good chance I can stick in the NHL.”