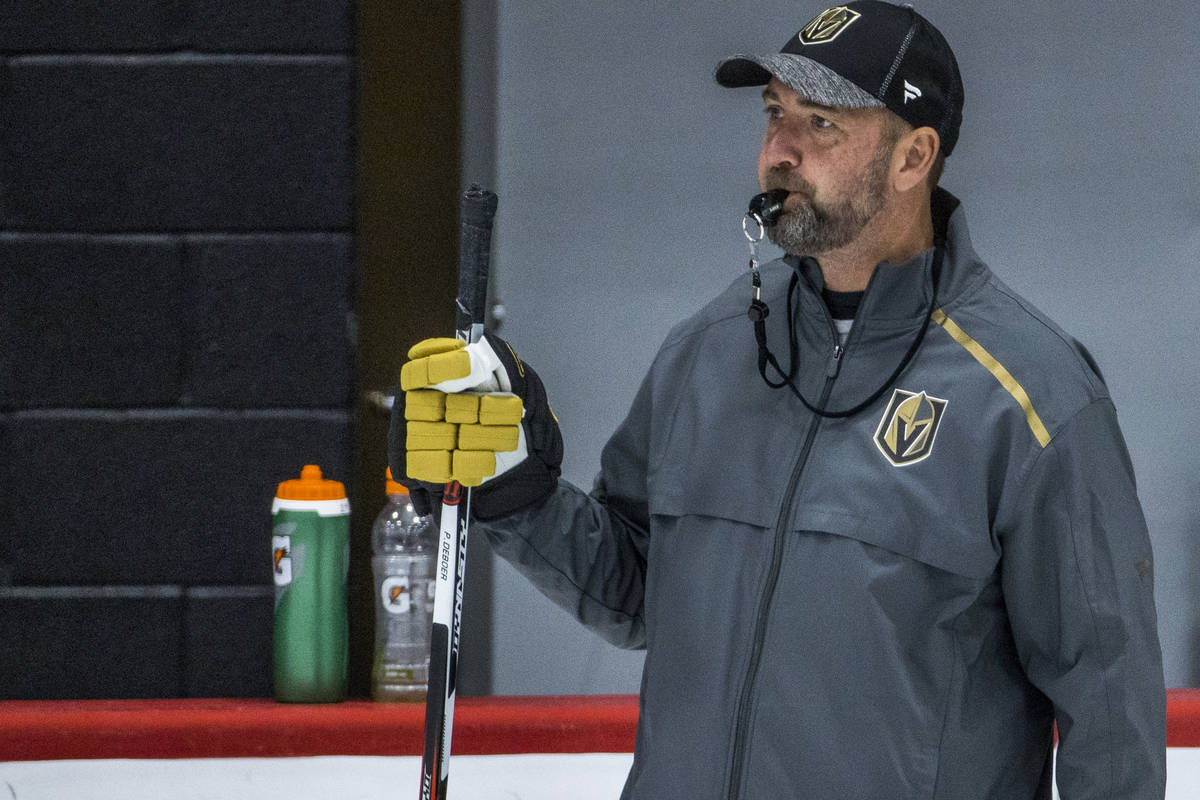 Because of their work in the first two games of the round robin, the Golden Knights can do no worse than finish as the No. 2 seed for the upcoming Western Conference quarterfinals.

But coach Pete DeBoer would like to avoid as many potholes as possible on their postseason journey.

“The higher the seed, the easier path you get. That’s the reality,” DeBoer said during a video news conference Friday. “There isn’t an easy path once the playoffs start, but there’s definitely some paths that are a little easier than others.”

The Knights face Colorado, which also is undefeated in round-robin play, Saturday at Rogers Place in Edmonton, Alberta, with the winner earning the conference’s No. 1 seed.

If the Knights win, they would face Chicago in the opening round. With a loss, they would play Arizona.

Since this year’s playoffs are reseeded as part of the NHL’s return-to-play agreement, that gives the No. 1 seed the advantage of facing the lowest remaining seed in every round.

The higher seed gets “home-ice advantage” in the playoffs for four games of the best-of-seven series, which includes the last line change. DeBoer also noted it comes with other small benefits, such as using the home dressing room.

“It’s important for us. I think we have a lot to gain with these extra games before the series start,” right wing Reilly Smith said. “We came in with the mindset that we want to win every one of them. We want to get that No. 1 seed because it changes a lot with seeding as the rounds play on. We’re focused, we’re ready and we’re excited about the challenges.”

Robin Lehner is expected to be in net for the Knights, as DeBoer continues to alternate his goaltenders. He made 24 saves in Monday’s 5-3 victory over Dallas to open the round robin.

Left wing Max Pacioretty’s status remains unclear after he missed both round-robin games and the exhibition. The Knights’ leading scorer during the regular season has not practiced with the team since July 19 because of a “minor injury” that is not related to a positive COVID-19 test.

According to the Phase Four protocol, Pacioretty is not required to quarantine if he travels to Edmonton on a charter flight, but he must pass a COVID-19 test to be cleared. He must quarantine in his hotel room for four days until four negative tests are confirmed if he flies commercial.

“He’s really close. That’s all I can tell you for now,” DeBoer said. “But basically, I said he was on the horizon last time we talked about him, and he’s closer than that this time.”

Colorado, which is led by Hart Trophy finalist Nathan MacKinnon, dominated the two regular-season matchups. The Avalanche won 6-1 on Oct. 25 and 7-3 on Dec. 23 behind two goals from former Knights center Pierre-Edouard Bellemare.

The Avalanche sneaked past St. Louis in the round-robin opener when Nazem Kadri scored with one-tenth of a second remaining in regulation and then steamrolled Dallas 4-0.

“We didn’t have our best games against Colorado, there’s no doubt about that,” Smith said. “The best thing we can do against a team like that is defend smartly and quickly. Those are a couple things that we’ll try to implement and really try to slow them down, especially through the neutral zone.”

The Knights have outscored their two round-robin opponents 7-0 in the third period, but must clean up the defensive-zone turnovers that plagued them against St. Louis.

Defenseman Nate Schmidt failed to clear leading to the first goal Thursday, and Chandler Stephenson coughed up the puck along the wall before the Blues’ second. The Knights also were unable to manage the puck before Troy Brouwer gave St. Louis a 4-3 lead in the second period.

“Our goal right from day one of camp was to try and get the first seed, and we’ve got an opportunity to do that,” DeBoer said. “We’ve set ourselves up to do that. Let’s take advantage of it.”