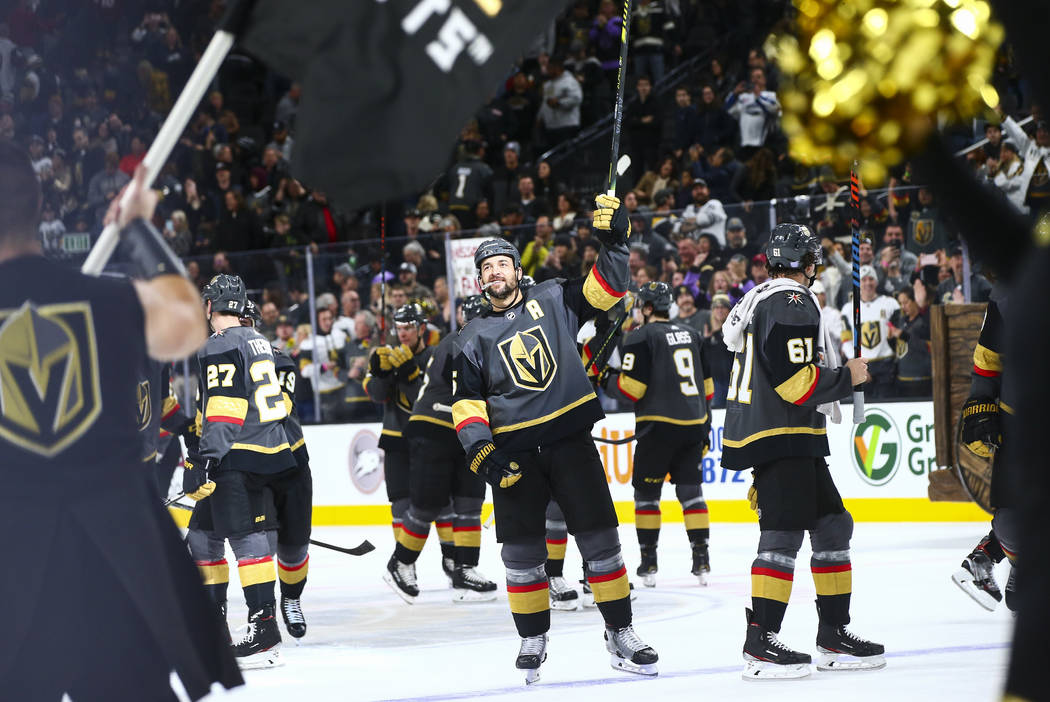 The Golden Knights, including Deryk Engelland, center, celebrate after a shootout win over the Arizona Coyotes in a NHL hockey game at T-Mobile Arena in Las Vegas on Friday, Nov. 29, 2019. (Chase Stevens/Las Vegas Review-Journal) @csstevensphoto 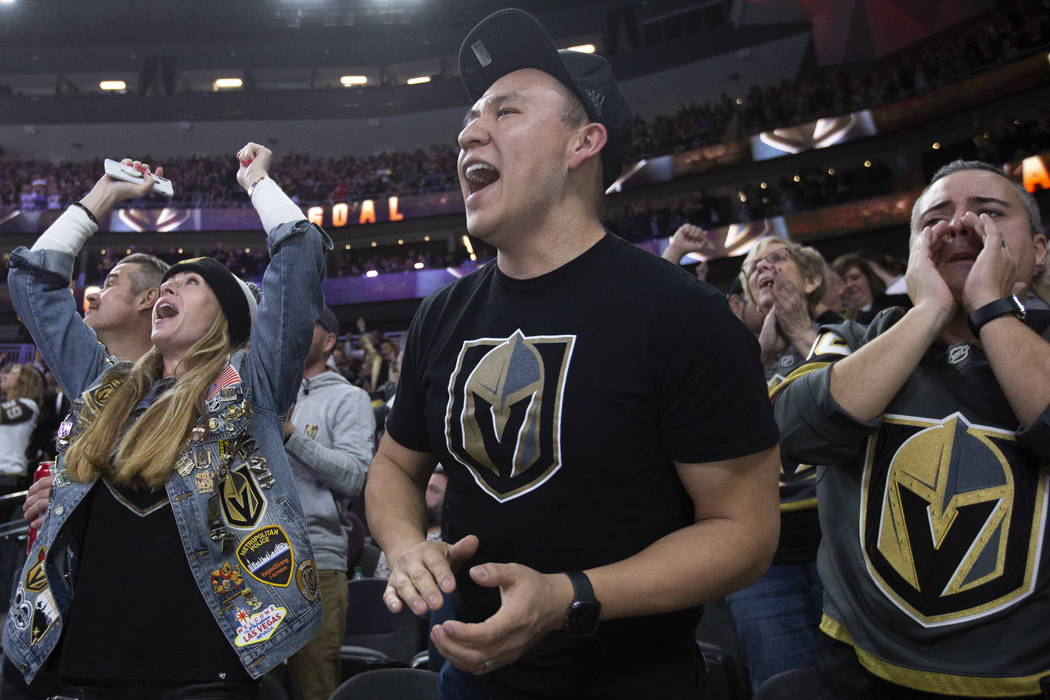 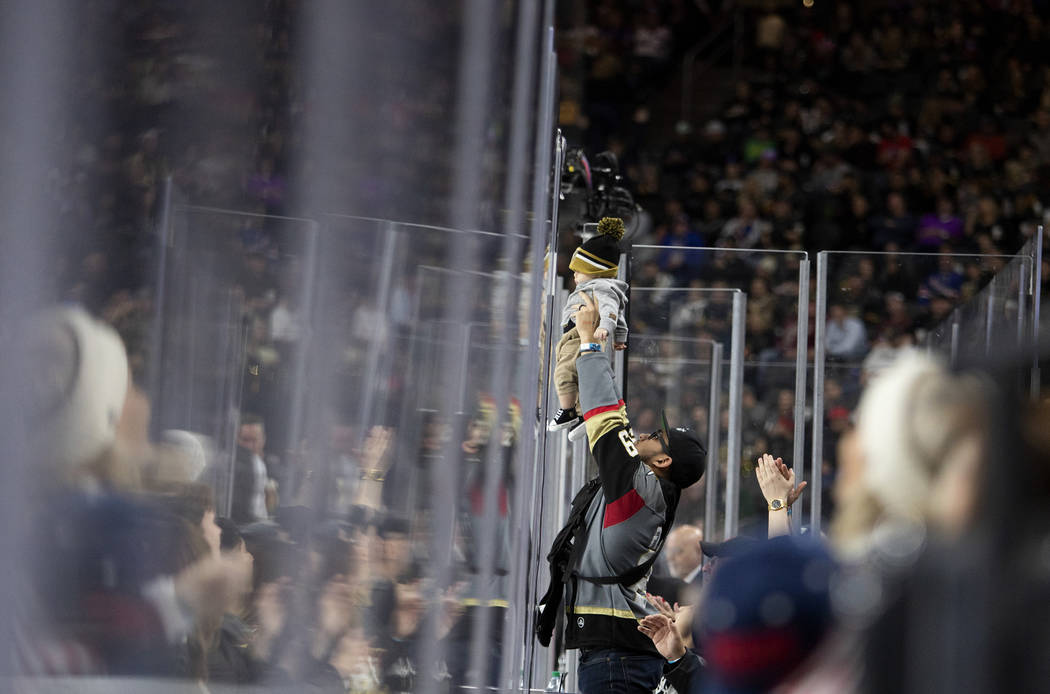 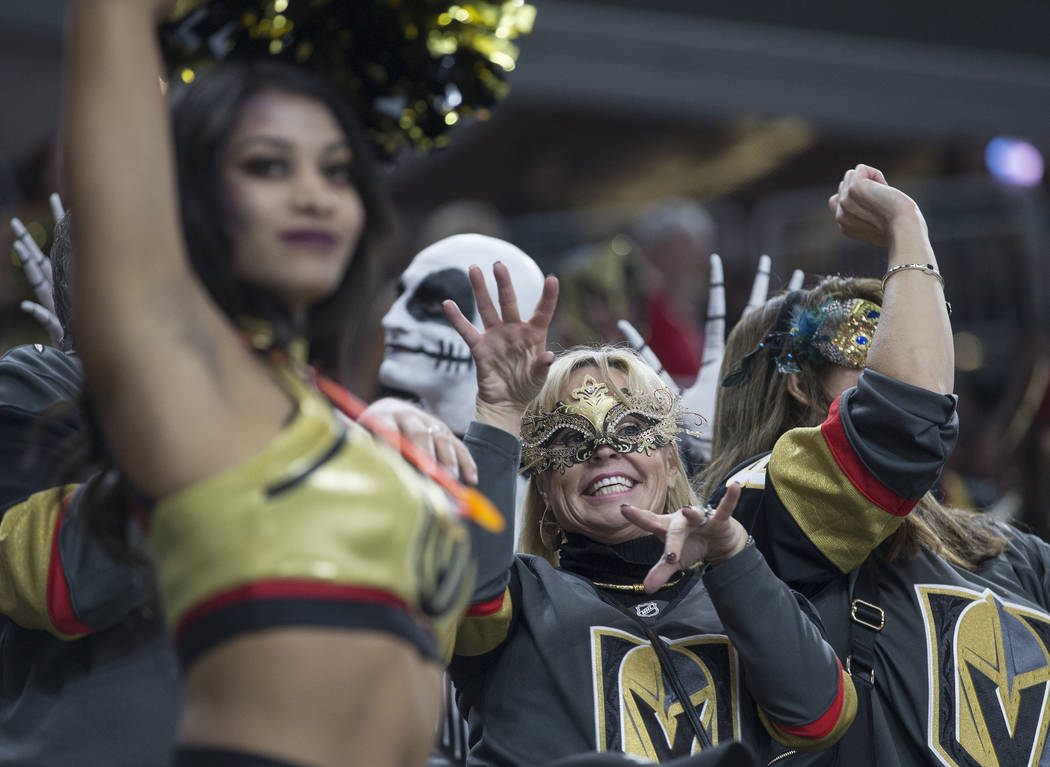 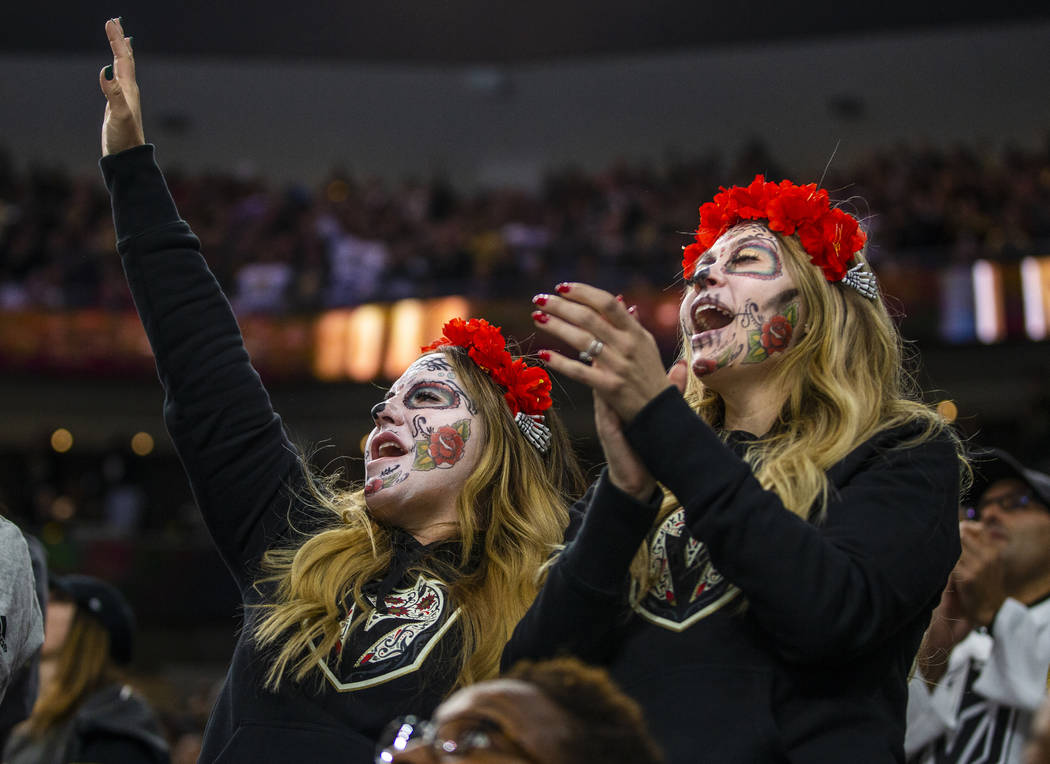 Erin Colegrove and Kharisma Rodriguez cheer a Vegas Golden Knights goal over the Winnipeg Jets during the first period of their NHL game at the T-Mobile Arena on Saturday, Nov. 2, 2019, in Las Vegas. (L.E. Baskow/Las Vegas Review-Journal) @Left_Eye_Images 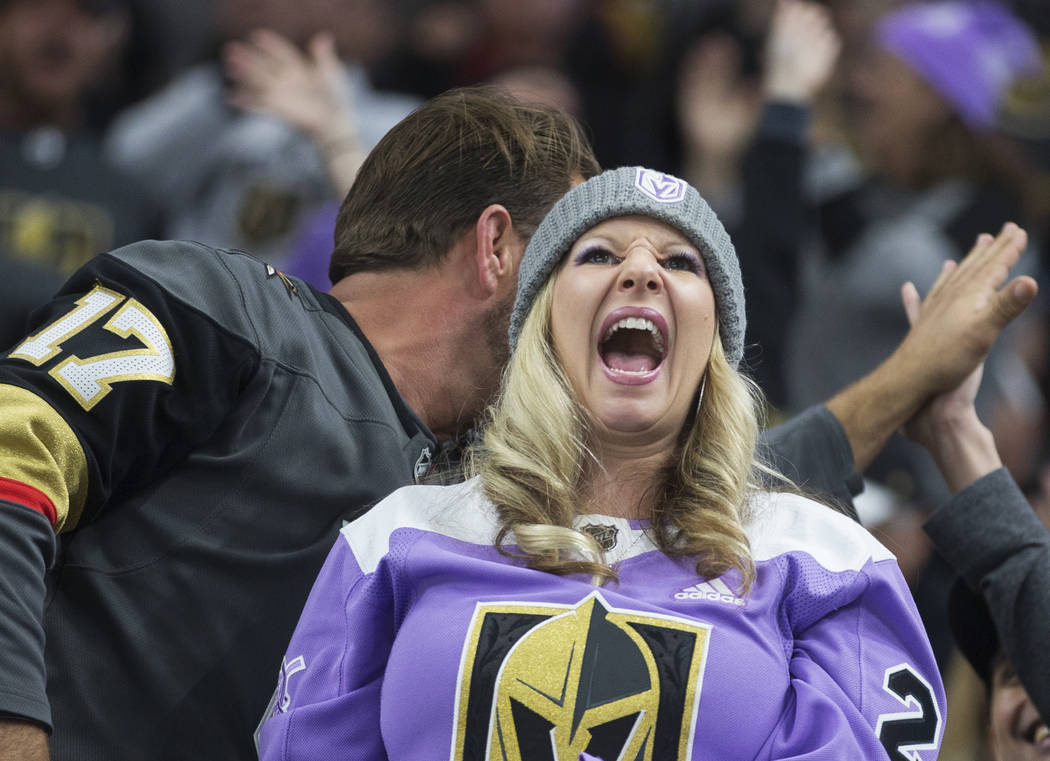 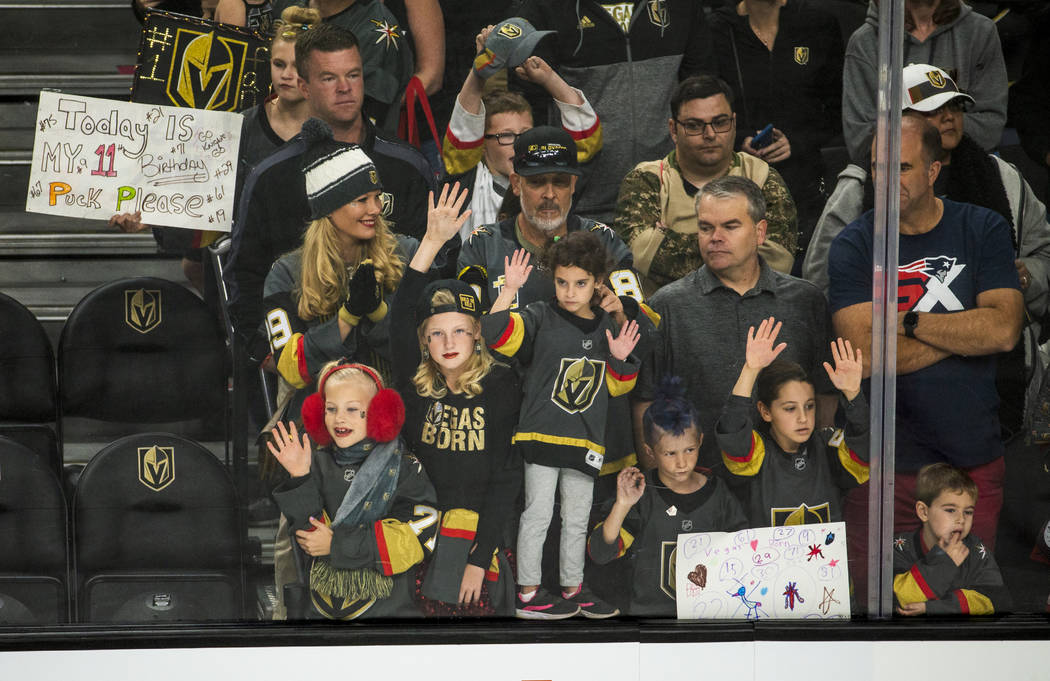 Vegas Golden Knights fans press up to the glass in hopes of getting a puck before the first period of their NHL Hockey game versus the Anaheim Ducks at the T-Mobile Arena on Sunday, Oct. 27, 2019, in Las Vegas. (L.E. Baskow/Las Vegas Review-Journal) @Left_Eye_Images 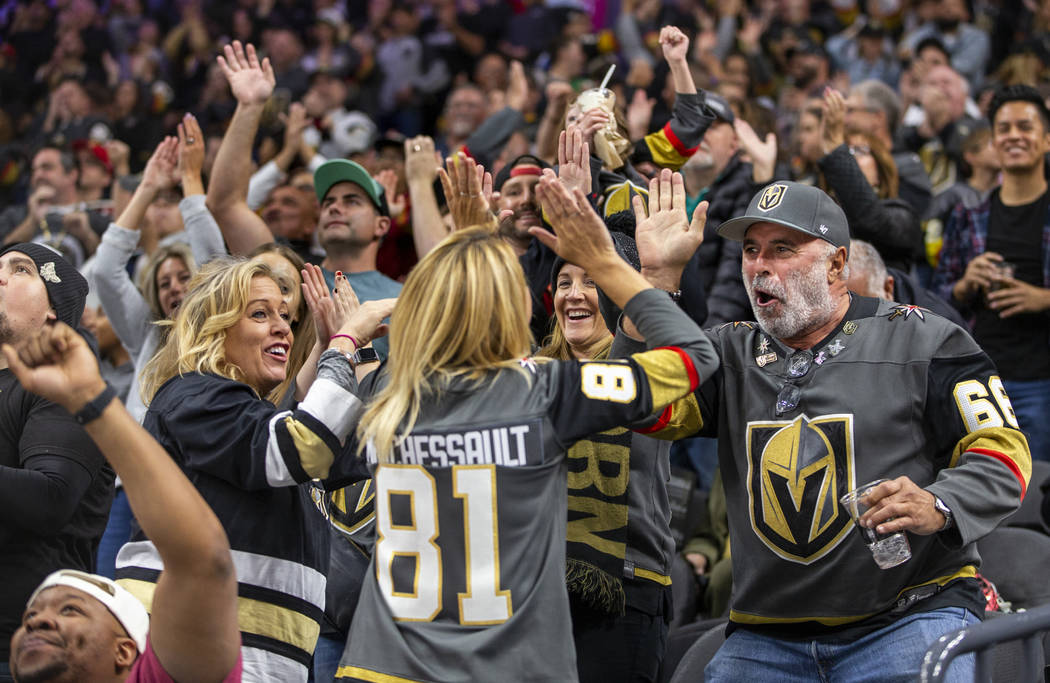 Vegas Golden Knights fans celebrate another goal over the Anaheim Ducks during the second period of their NHL Hockey game at the T-Mobile Arena on Sunday, Oct. 27, 2019, in Las Vegas. (L.E. Baskow/Las Vegas Review-Journal) @Left_Eye_Images 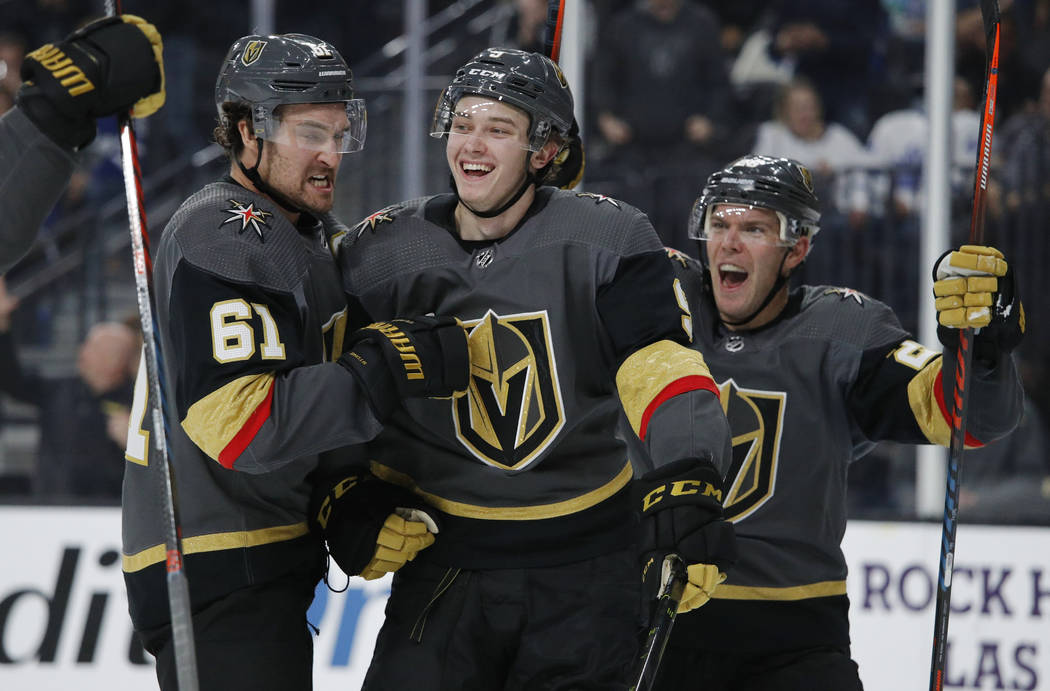 More than two years after the first reported outbreak, a vaccine may have been developed for the Vegas flu.

T-Mobile Arena, one of the NHL’s most energetic and respected home venues, is no longer providing the Golden Knights with a steady stream of points. Instead the team’s previously vaunted home-ice advantage has utterly disappeared.

Sunday’s 5-0 loss to the New York Rangers was a stark reminder. The Knights were shut out at home for the first time since Feb. 19, 2018. They had given their fans at least one goal to cheer for in their previous 68 home games.

If treatment for the Vegas flu, the nickname for the Knights’ home-ice advantage, really is suddenly available, the team needs to adapt quickly. That starts Tuesday with a 7 p.m. date with the Chicago Blackhawks.

“I think teams are coming in here and playing hard because they know it’s such a tough building to play in,” right wing Ryan Reaves said. “We’re getting teams’ best, and sometimes we might not be mentally prepared for the push they’re coming with. I think it’s something we have to learn quick, because you have to take care of business on home ice to reach your goals.”

The Knights made the playoffs each of their first two seasons in part due to sterling home records. They were 29-10-2 at home in 2017-18, tied for the fifth-best home record in the league. They ranked eighth last season with a 24-12-5 mark.

After Sunday, they are 7-6-3, one of seven teams with more losses than wins at home. In home games, their 43.75 winning percentage is fifth worst and their 62.5 points percentage ranks ninth worst.

It isn’t just that the Knights are losing games at T-Mobile Arena. It’s how they are losing.

The Knights have been outscored 50-47 at home and have put together several disappointing efforts. They have lost by five goals on home ice twice already: Sunday against the Rangers and Oct. 25 against the Colorado Avalanche. They had done so only once previously in franchise history: March 14, 2018 against the New Jersey Devils.

“Last game was definitely frustrating,” left wing Max Pacioretty said. “We have to find a way to dig out of it.”

Breaking that home-ice lull might mean waking up their fans. The Knights so often in their first two seasons seemed to score early, whip the home crowd into a frenzy and ride that momentum into a win. That hasn’t happened nearly as often this season because they are prone to slow starts.

“If we score on our chances, I think that’s it,” center William Karlsson said. “When you have the crowd into it, it’s a whole lot more fun to play.”