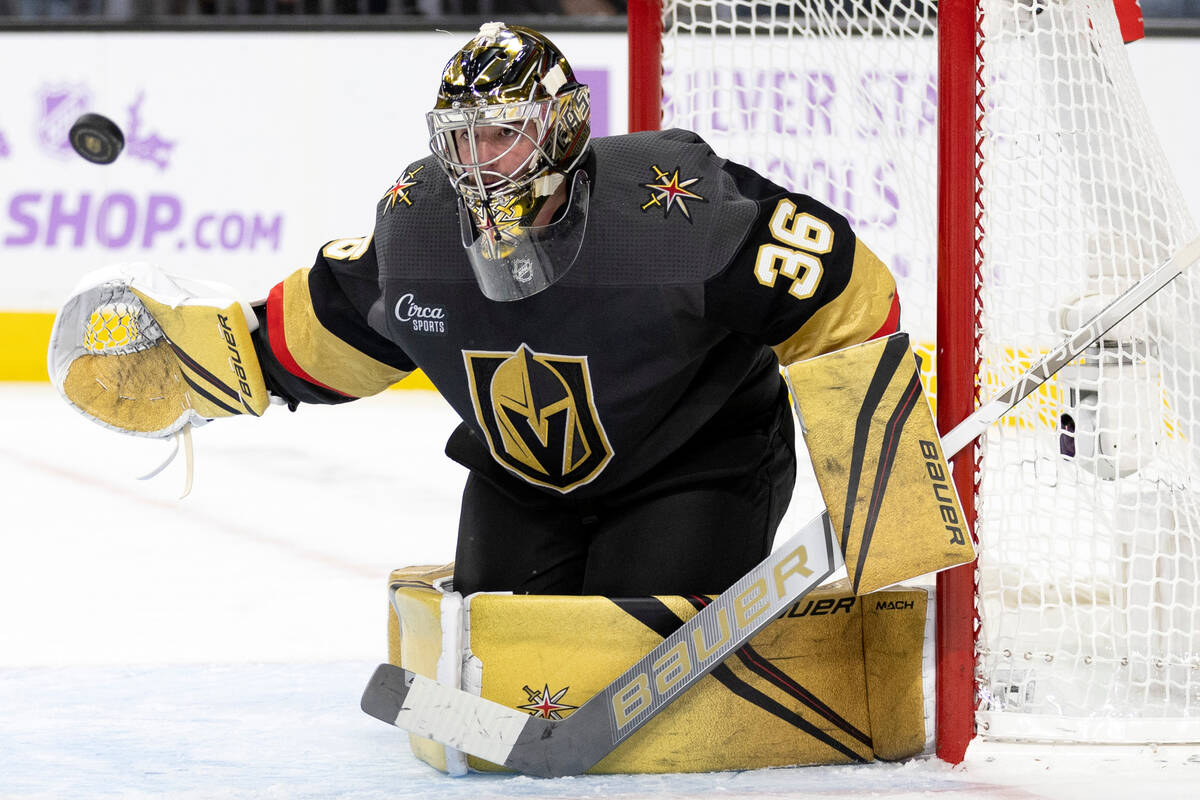 Golden Knights goaltender Logan Thompson (36) prepares to make a save during the second period of an NHL hockey game against the Senators at T-Mobile Arena on Wednesday, Nov. 23, 2022, in Las Vegas. (Ellen Schmidt/Las Vegas Review-Journal) @ellenschmidttt 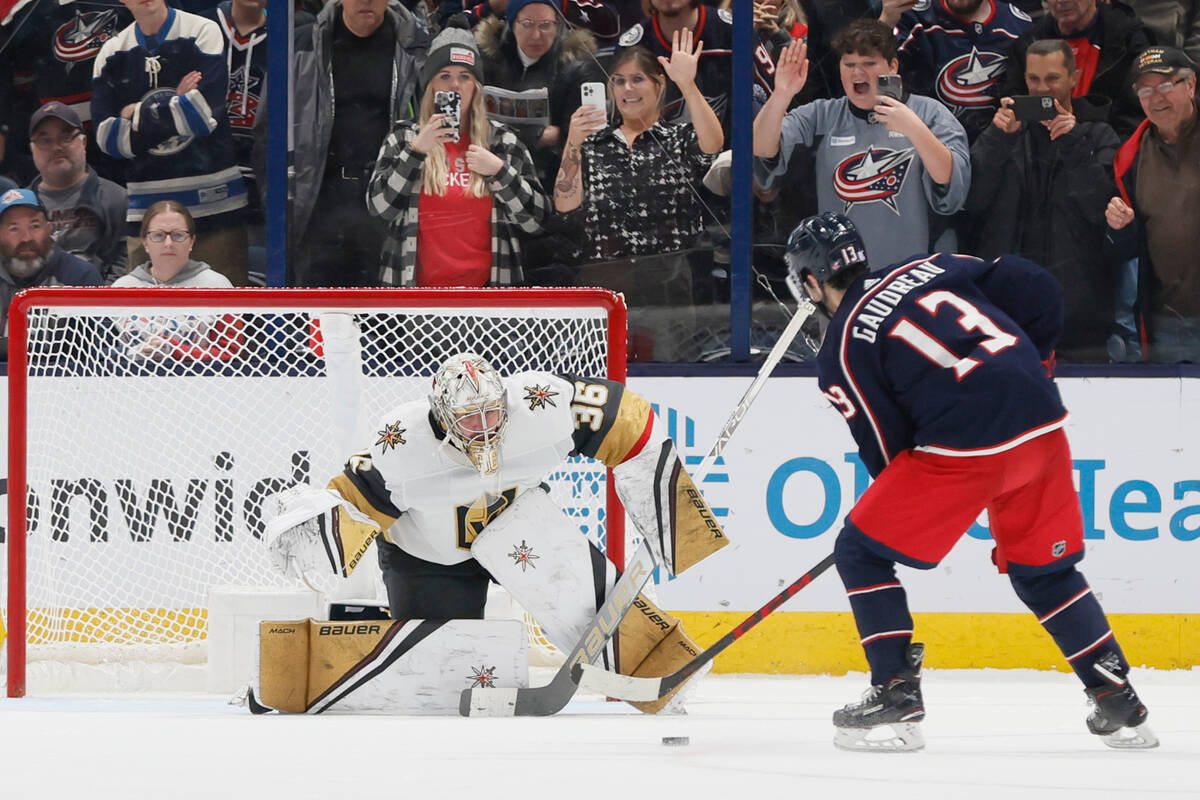 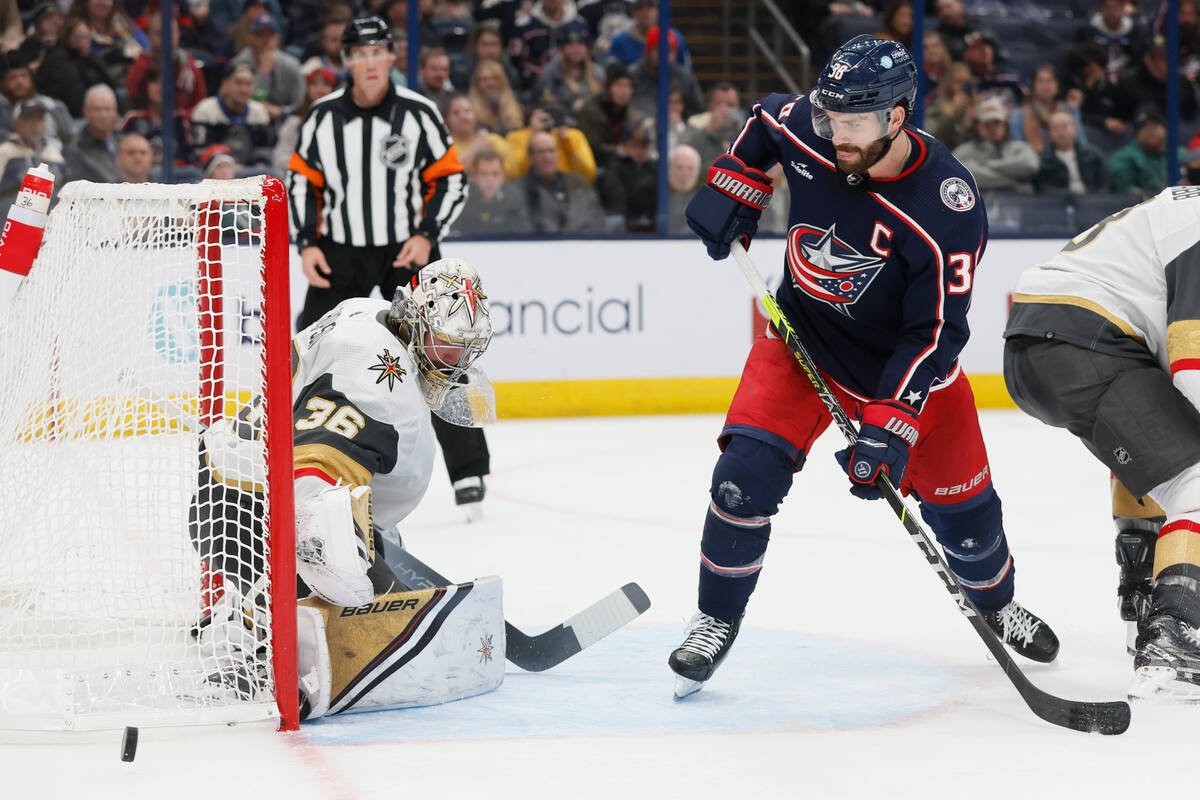 Golden Knights coach Bruce Cassidy has been behind the bench for 533 NHL games. Thirty-one of those have gone to a shootout.

But he has never seen what happened Monday in Columbus’ Nationwide Arena.

Knights goaltender Logan Thompson signaled to the bench that he wanted fellow rookie Paul Cotter to take the potential game-winning shootout attempt against the Blue Jackets.

Cotter did. He scored.

Moments like that are what set Thompson apart. His conviction, confidence and swagger are special.

It’s why, more than a quarter of the way through the season, he’s cemented his spot as the team’s No. 1 goaltender. He was also named the NHL’s November rookie of the month Thursday because of his 8-2 record.

“That’s our intention right now, to build him into more of that role as the guy that’s playing more,” Cassidy said Nov. 23 after Thompson made 39 saves in a win over Ottawa. “I just think Logan really had such a strong start that he started angling that way.”

Goaltending was the Knights’ biggest question mark before the season.

Robin Lehner, the primary starter last season, will miss the season with a hip injury that required surgery. The No. 2, Laurent Brossoit, missed training camp while recovering from hip surgery. He was sent to the Silver Knights after clearing waivers Nov. 11.

The team needed Thompson and goaltender Adin Hill to fill the void. The Knights wanted one of them to be playing more a quarter of the way through the season. They just didn’t know which one.

Thompson made the choice easy. He’s tied for second in the NHL with 12 wins. His .921 save percentage ranks ninth among goaltenders with five or more starts. Hill is tied for 34th (.903).

Thompson has been great when the Knights needed it the most, like stopping six straight shootout attempts Monday to set up Cotter’s winning shot.

Thompson is 20 of 24 (.833 save percentage) in his career in shootouts. A goaltender needs to face at least 40 attempts to appear in the record book, but if he did qualify, he would rank third all time.

“It’s a lot of fun,” Thompson said. “The fans love it. I was a fan, and I always loved it, and I love playing in it. It’s a little skills competition.”

The Knights have rewarded Thompson by upping his workload. He started six games in October, and Hill got four. The split in Novemberwas 10-4 in favor of Thompson. Only six goaltenders across the league have started more games than he has.

Thompson earned that trust. His athleticism and willingness to fight for every save should have him in the conversation for the Calder Trophy for rookie of the year. But his personality also brings plenty to the Knights.

Thompson infuses every practice with energy because he’s so competitive. He’s constantly jawing with skaters whether he makes a save or allows a goal.

His brain is also a weapon.

Captain Mark Stone approached Thompson before a penalty shot against Edmonton on Nov. 19. Thompson has faced Oilers goaltender Stuart Skinner plenty of times throughout his career in the Western Hockey League and American Hockey League.

He told Stone to shoot five-hole. It worked.

Thompson’s instincts were right again when he asked for Cotter on Monday. He’s not only doing everything in his power to help the Knights win but also inventing new ways to do so.

“He’s full of confidence,” left wing William Carrier said. “I like that.” 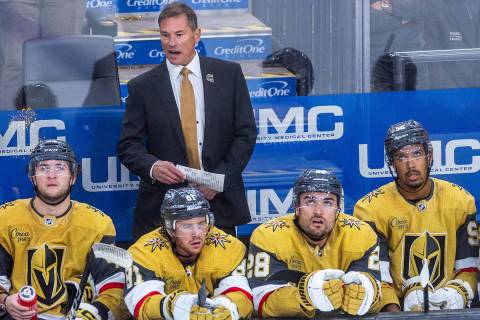 The Golden Knights will have a lot of special guests in the building for Tuesday’s 5 p.m. game against the Nashville Predators — the team’s first since the All-Star break.