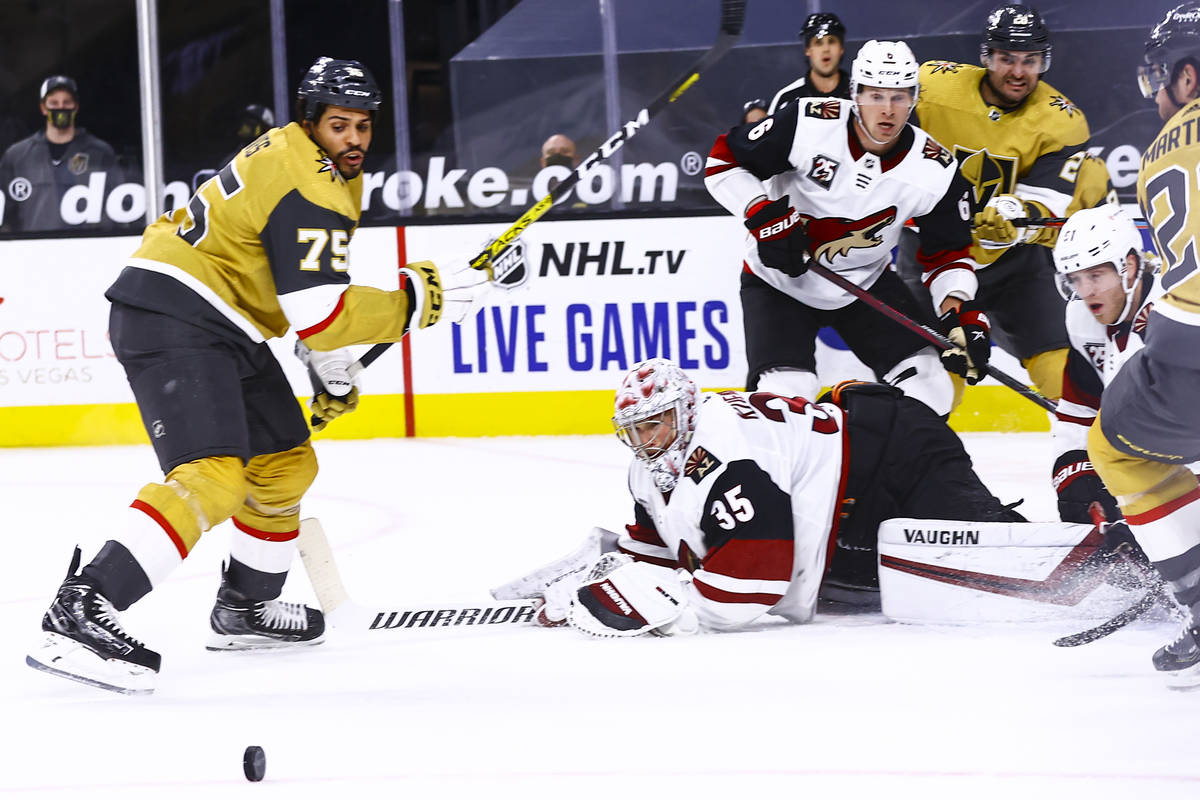 It was Ryan Reaves’ 34th birthday Wednesday, and the Golden Knights’ gregarious forward celebrated the occasion as only he can.

What exactly does that entail?

“I go home, I eat some spaghetti, I take a nap, come bang a couple bodies, hopefully score a goal, go home, have a beer, shut ’er down,” Reaves said after the morning skate. “It’s a nice birthday.”

Before Wednesday’s game against Arizona at T-Mobile Arena, Reaves had played an NHL game on his birthday four times — oddly, three of the matchups came against Detroit — and registered one assist with four penalty minutes.

Reaves was leading the NHL in hits per 60 minutes through three games this season and had one assist in the season-opening win over Anaheim when he backhanded a pass through his legs to Tomas Nosek in the slot.

Center William Karlsson produced a similar between-the-skates feed to Reilly Smith for the tying goal in the third period of Monday’s 4-2 come-from-behind win over Arizona.

Reaves gave his pass a higher grade based on degree of difficulty.

“It was only better because he’s a better player,” Reaves said. “I’m not expected to make those plays, so I think mine was a little bit better. And I’m pretty sure he actually saw the player, so I’ll give him that.”

After complaints about the performance of the pucks embedded with tracking technology, the NHL announced Tuesday it would temporarily return to the official pucks from the 2019-20 season.

The league said the “tracking pucks” did not receive the proper finishing treatment during the manufacturing process and a new supply will be available soon. Reaves said the pucks bounced more than normal.

“They’re ridiculous. They’ve got to take those chips out,” he said. “I’m not going to pretend like I’m the best stickhandler, but when you see some of the best players out there bobbling pucks and losing them and complaining about them, you know there’s a problem.”

The manufacturer of Robin Lehner’s custom goalie pads leaked a photo of his newest setup through the popular Goalie Gear Nerd Twitter account on Wednesday.

The black leg pads feature a gold V across the middle with silver accents and the silhouette of a knight holding a sword in the negative space. His glove and blocker feature a black background with a portion of the secondary, red star logo visible at the top.

This would be the third setup Lehner has worn with the Knights since being acquired in February. He did not debut the pads during the morning skate at City National Arena or during Wednesday’s game against the Coyotes.