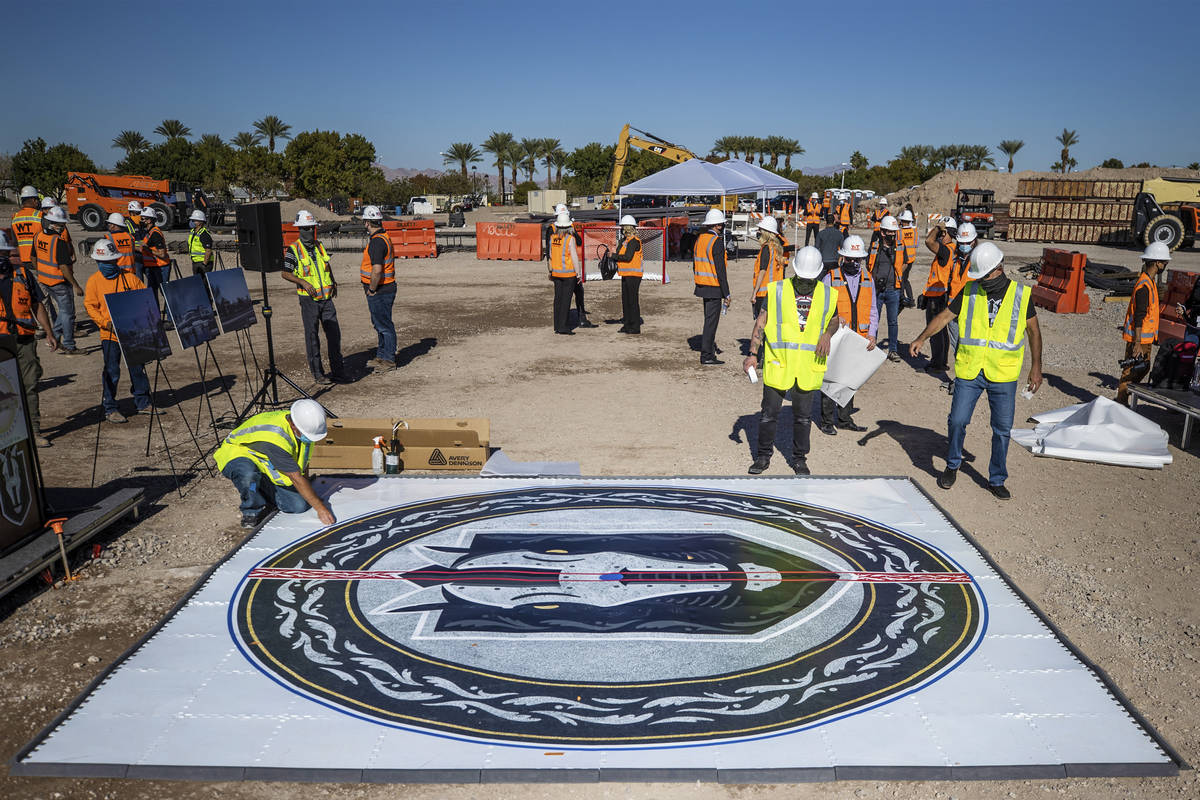 Construction workers put the finishing touches on the Henderson Silver Knights logo during a construction event hosted by the AHL team at the site of their future arena on Wednesday, Oct. 28, 2020, in Henderson. (Benjamin Hager/Las Vegas Review-Journal) @benjaminhphoto

Manny Viveiros has been in Henderson for three weeks, has settled in and is ready to begin the newest chapter of his career.

The problem is, the Silver Knights coach doesn’t know exactly when it will begin.

The American Hockey League announced a tentative start date of Feb. 5 on Wednesday, but Viveiros knows that could change again because of the coronavirus pandemic. So he’s trying to stay busy, adjust to his new surroundings and be ready whenever hockey starts again.

“There’s always something to do,” Viveiros said Wednesday at the construction site of the Silver Knights’ arena. “It gives us time to prepare. We don’t have to rush. We’ll slowly get going together as a staff and working together. For me, like everybody else, we’re (used to) playing regular-season hockey right now. Now we’re waiting another couple of months. There’s nothing we can do about that.”

What’s keeping Viveiros busy is putting together a staff, which he expects to finalize in the coming weeks, and watching tape of his potential future players. He’s trying to familiarize himself with the Golden Knights’ prospects so he knows how to fit them into his up-tempo system that’s expected to be similar to the one coach Pete DeBoer will run in the NHL.

Viveiros also is getting used to his surroundings as much as possible. He’s visited the Silver Knights’ future practice facility, Lifeguard Arena, several times and plans to go to Orleans Arena, where the team will play its first two seasons.

He’s hoping before long he’ll get to be on the bench with his team.

“There’s more important things in life than just sports,” Viveiros said. “People, we have to be able to protect their health. We have to protect everybody else. … We will get through this eventually, but it’s going to take a little time.”

Golden Knights prospects Peyton Krebs, Kaedan Korczak and Lukas Cormier were invited to Canada’s 2021 World Junior Championship selection camp in Red Deer, Alberta. The camp will take place from Nov. 16 to Dec. 13, during which a pool of 46 players will be cut to a 23-man roster.

The competition begins Christmas Day in Edmonton. Canada is the defending champion.

Krebs, 19, is the Knights’ top prospect and was the 17th overall pick in the 2019 draft. The center had 60 points in 38 games for his junior team, the Western Hockey League’s Winnipeg Ice, last season and was part of the Knights’ postseason roster.

Korczak, 19, was a second-round pick in 2019. The right-shot defenseman had 49 points in 60 games for the WHL’s Kelowna Rockets last season.

Cormier, 18, joined the organization in October after he was selected in the third round of the draft. The left-shot defenseman is already playing this season for the Quebec Major Junior Hockey League and has 11 points in seven games.

Asked Wednesday about how nice it will be to have the Knights’ NHL and AHL teams in the same area, forward Gage Quinney couldn’t help but poke a little fun at teammate Nicolas Roy.

Roy was involved in 31 transactions between Las Vegas and Chicago last season to save the Knights salary cap space. Now, those trips will often require a car instead of a plane.

“That’s really nice to know,” Quinney said. “I think Roy was wishing that was last year.”