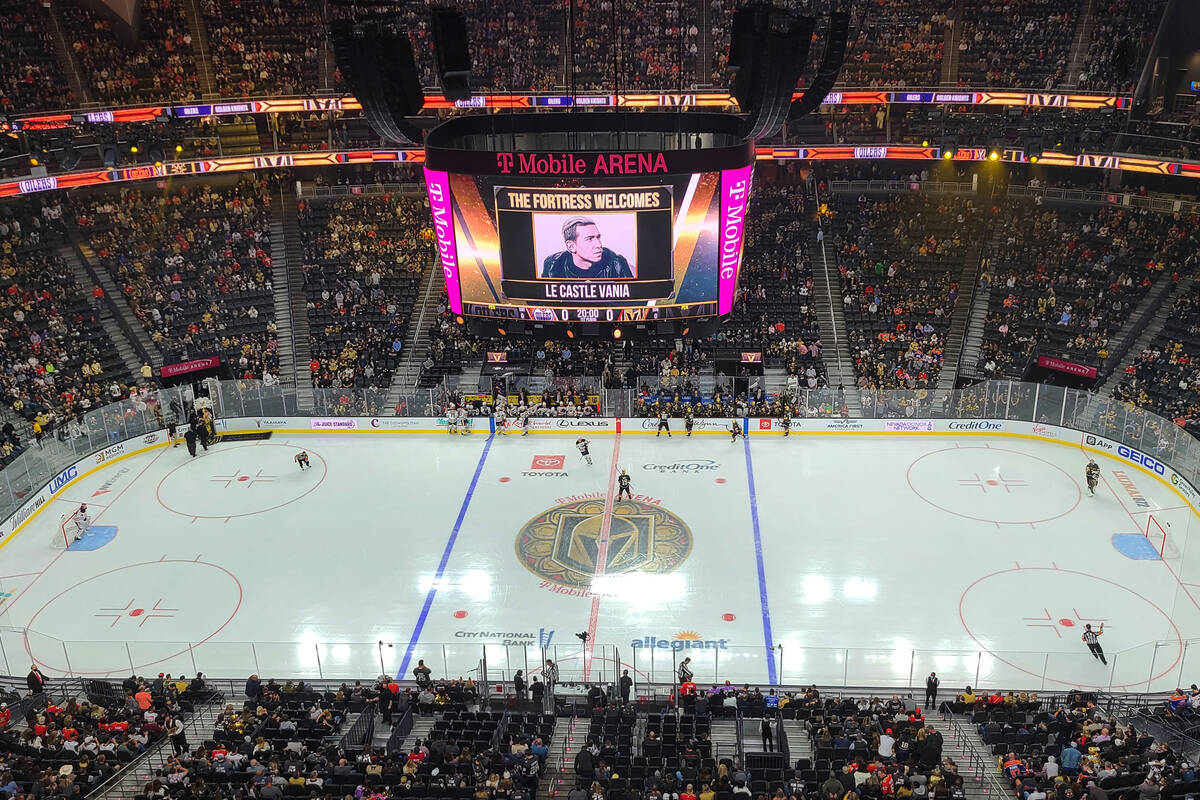 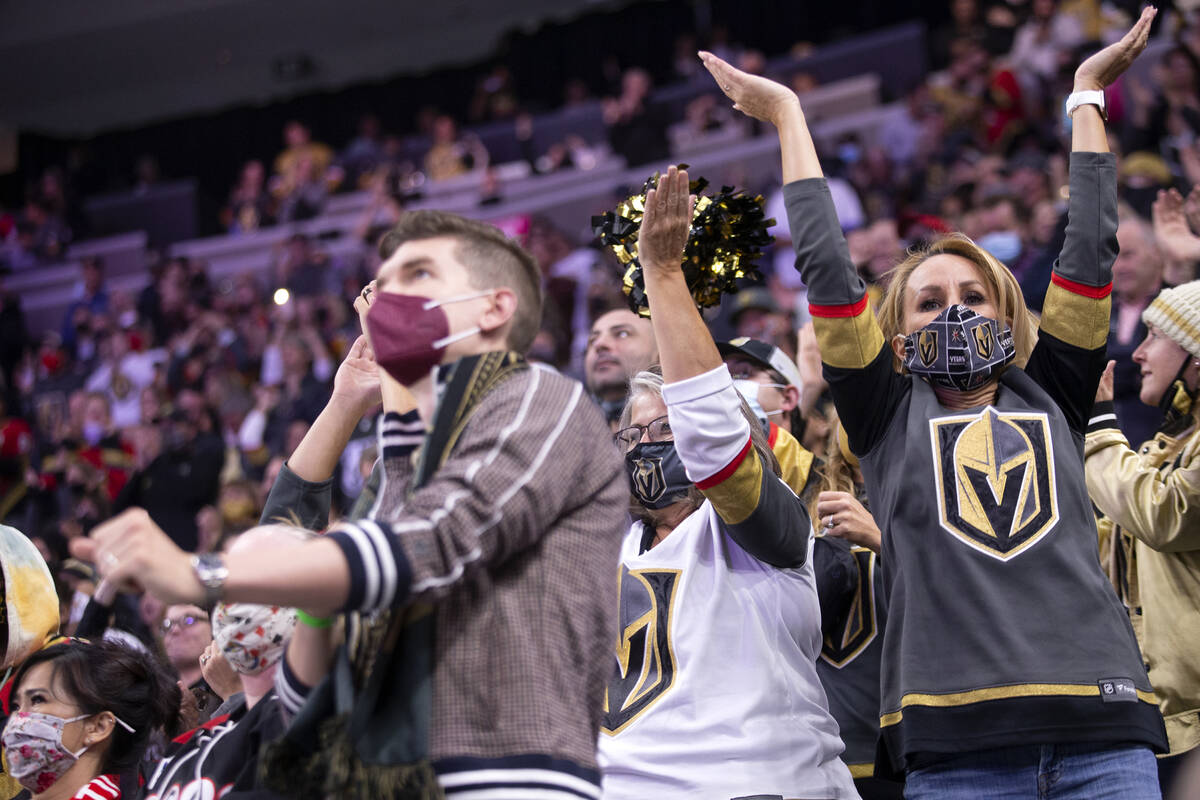 Golden Knights fan Tim Dudek believes the “Knight” shout during the national anthem for the season opener against the Seattle Kraken on Oct. 12 was the loudest he’s heard it.

The “season ticket holder since Day 1” loved the atmosphere from his seat in Section 1 at T-Mobile Arena. The game, shown by one of the NHL’s new national TV partners in ESPN, showcased everything the Knights have come to represent through five years as a franchise.

They created tremendous energy in their building, thanks to a production team that projected a fight with a giant squid onto the ice before puck drop. They put a winning product on the ice, evidenced by a 4-3 victory. And the Knights packed their building. Their announced crowd of 18,431 was 106 percent of T-Mobile Arena’s capacity.

Then Dudek noticed something else watching the next three home games: empty seats. The Knights had announced crowds of less than 18,000 in their losses to the St. Louis Blues, Edmonton Oilers and New York Islanders. They haven’t dipped below that mark since their inaugural season.

Why is Las Vegas’ once hottest ticket suddenly more available? It’s complicated, for many reasons outside the team’s control and a few that aren’t.

“Kind of the shine is off it,” said Russ Morgan, a former season ticket holder. “The newness, the excitement of the team. It was the event of the season back in Year 2, even Year 3. Especially Year 1, Year 2, Year 3, if you had Golden Knights tickets, that was a big deal.”

The Knights’ early-season attendance dip is relative. While the announced crowds for the last three home games are the ninth, 10th and 14th lowest in their regular-season history, their 17,950 average is still 103 percent of capacity. That ranks first in the NHL.

The empty seats are paid for. Some fans just aren’t showing up.

“They’re season ticket holders,” owner Bill Foley said. “Especially in the lower bowl when you see empty seats, those seats are all sold.”

Attendance is a leaguewide issue as teams attempt to get fans back into buildings while COVID-19 continues to spread. The average announced crowd in the NHL was 17,408 during the 2019-20 season. It’s 15,728 this season as of Wednesday morning, a drop of 9.65 percent.

Only three teams have had their attendance rise over pre-pandemic levels: The two-time defending Stanley Cup champion Tampa Bay Lightning, the Vancouver Canucks (who played one home game before Wednesday) and the Boston Bruins. The Washington Capitals’ crowds are the same. Every other team’s is down, except the Islanders, who don’t have their home opener until Nov. 20.

The Knights have not been immune to issues other teams are facing. They’re responding accordingly. The team has an offer in which fans can buy tickets for November and December home games with no additional fees on their purchase.

The NHL’s attendance data shows COVID-19’s influence has waned this season but hasn’t been eradicated.

That’s especially true in Las Vegas. The valley is still grappling with the economic effects of the pandemic. The city’s unemployment rate was 8.2 percent in August, according to the U.S. Bureau of Labor Statistics. It was 3.6 percent in February 2020.

Las Vegas’ room occupancy rate was 87.7 percent in August 2019, according to Las Vegas Convention and Visitors Authority data. It was 72.8 percent this August. A still-recovering local economy and a shortage of visitors is bound to affect the Knights’ bottom line.

The pandemic has also forced the team to adopt policies unpopular with fans. The Knights decided to follow Nevada’s mask mandate and require face coverings inside T-Mobile Arena. They did not require proof of a COVID-19 vaccination, as the Raiders did, which would have allowed them to opt out of the mandate.

Foley said he’s aware fans don’t want to wear masks, but added that the organization didn’t want to make them show proof of a vaccination to attend a game. He said he’s hopeful that with most major COVID-19 measures dropping over recent weeks the mask mandate soon will be gone.

Opinions on the mask policy vary, but few are positive. Some fans wanted the Knights to follow the Raiders’ lead. Some have concerns about enforcement in the arena. Others view it as a hassle.

The Raiders’ vaccination requirement has plenty of detractors, too. Dudek, who also has Raiders season tickets, said the value of his seats took a hit on the secondary market.

“I’ve seen it on both sides of it, whichever decision those guys made, it still tanked the sales,” he said. “I don’t know that you could pick one as the right way to do it.”

The Knights also have problems of their own making.

A portion of their fan base is upset about the offseason departures of fan favorite Ryan Reaves and especially former face-of-the-franchise Marc-Andre Fleury. The 36-year-old won the Vezina Trophy as the NHL’s best goaltender last season, but was traded to the Chicago Blackhawks in July for a minor league forward no longer in the Knights’ organization.

Fleury’s departure stung. What worked up fans even more was a perception that the team did not communicate with him leading up to the trade, a charge the front office denies.

That hasn’t stopped the anger.

“How could you not love Marc-Andre Fleury?” Morgan said. “And then for them to essentially give him away, I think for a lot of people, it left a bad taste in their mouths.”

The Knights’ methods might rub some the wrong way, but they’ve led to a lot of success. The team has the NHL’s fifth-best points percentage since entering the league as an expansion team. It has reached one Stanley Cup Final and two semifinals. Only the Lightning have appeared in more playoff series the previous four years.

Things did not start well this season, however. The Knights began 1-4, matching the worst start in franchise history. They have since won two straight against Colorado and Dallas.

The losses to the Blues, Oilers and Islanders marked only the third time in five seasons that the Knights have dropped three consecutive home games. In their defense, two of their best players — captain Mark Stone and left wing Max Pacioretty — missed all three games because of injuries.

Knights fan John Hugo said COVID-19 is the main reason he has yet to attend a game, but added that the loss of Stone and Pacioretty also has been a factor.

“With them out, we got a couple good players, but still there’s nothing really enticing me to go,” said Hugo, who owns two Stone jerseys.

The next chance to gauge the Knights’ attendance will be 5 p.m. Friday against the Anaheim Ducks. The team has 37 home games remaining after that, and T-Mobile Arena is hosting NHL All-Star Weekend on Feb. 4 and 5.

What the rink looks like all those nights depends on the county’s COVID-19 situation, the team’s performance and a lot of other factors. Increased competition is one, as for the first time the Knights and Raiders are playing simultaneously with fans able to see both.

Whether that means T-Mobile Arena will be filled less consistently remains to be seen.

“I think if we had started out 6-0, we’d probably have more people there,” Foley said. “We’re just really suffering through a lot of guys hurt, a lot of key guys, and they’re not just hurt and out for a week. They’re out for five weeks, six weeks, four weeks.”