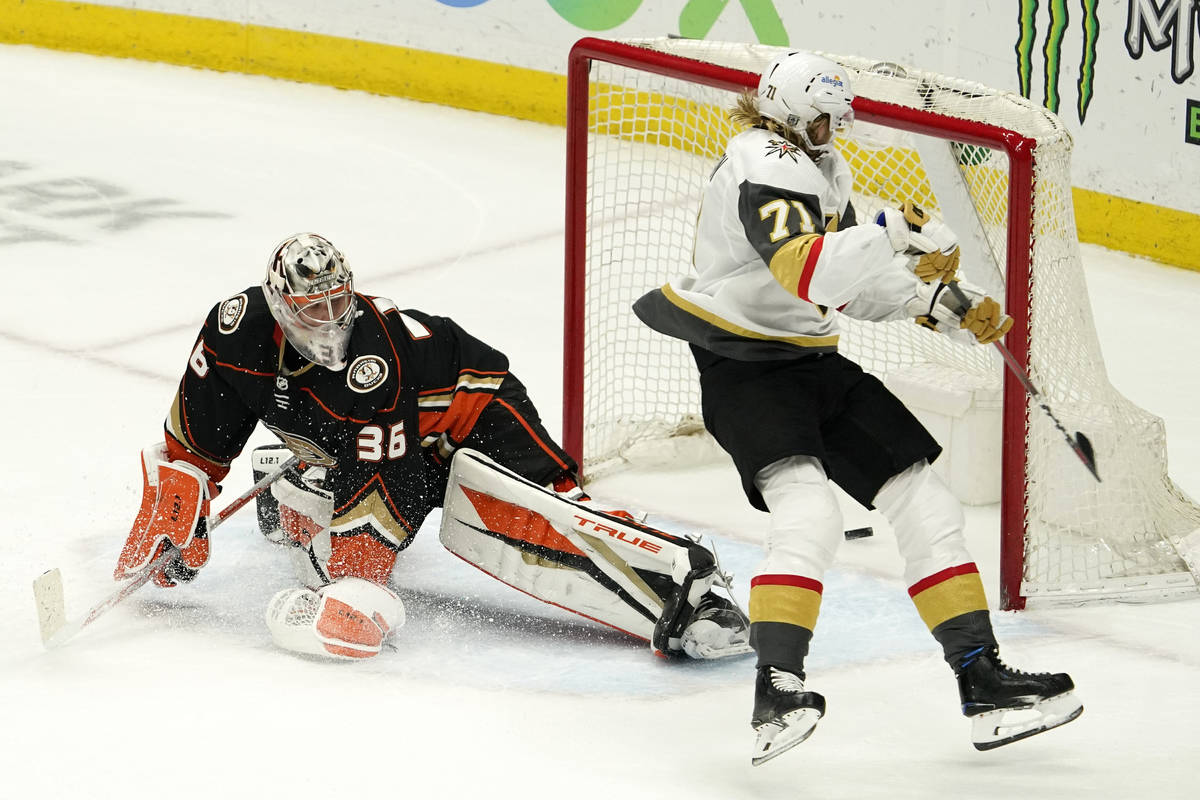 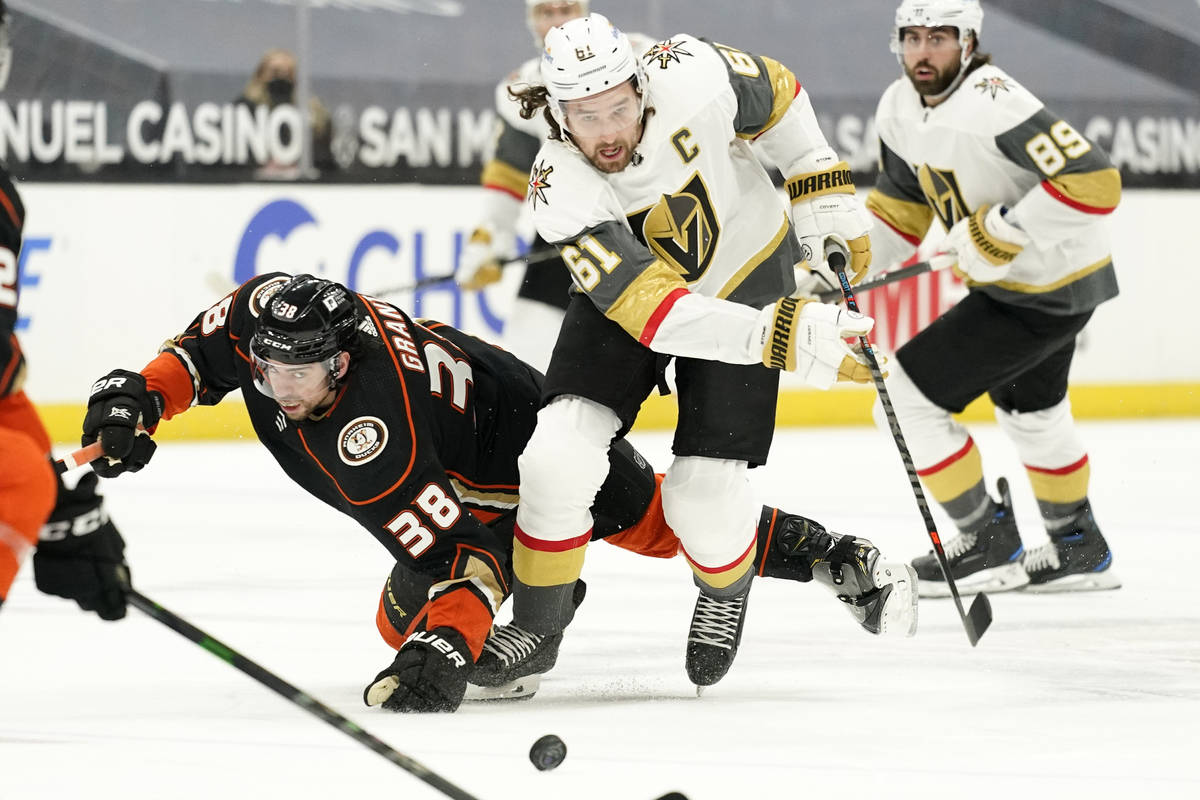 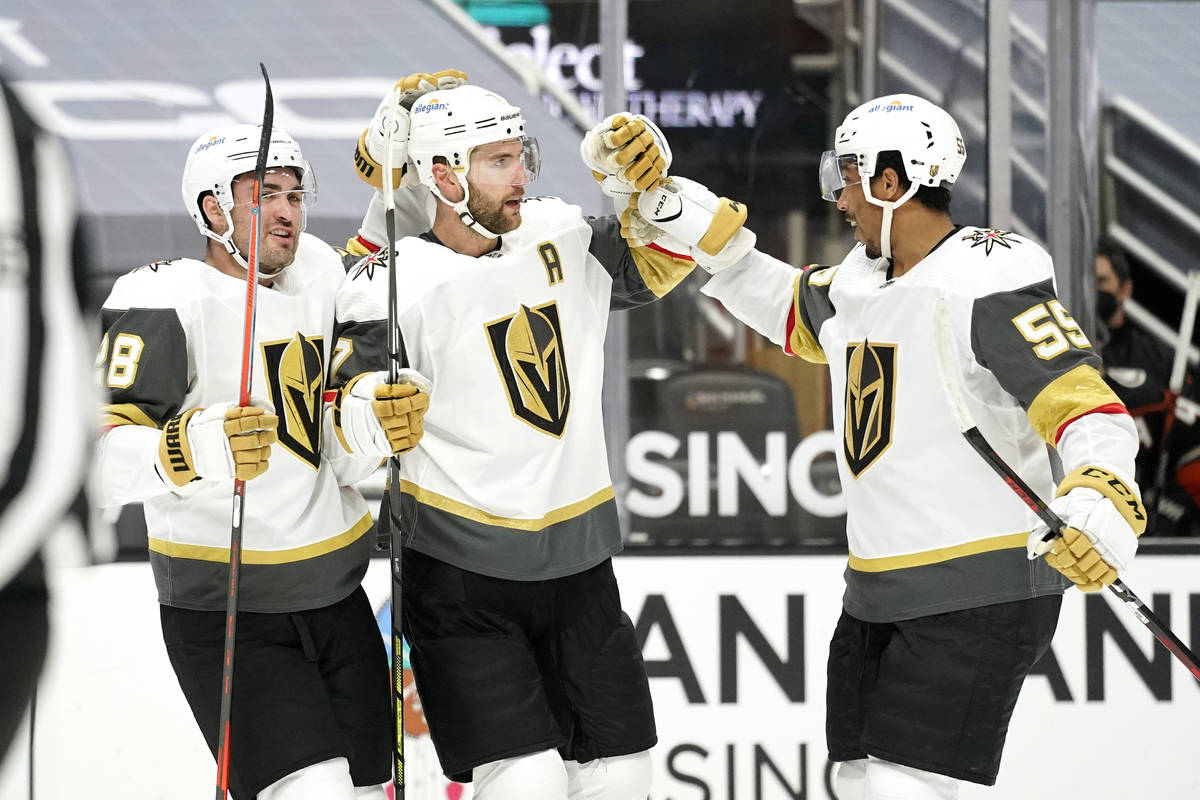 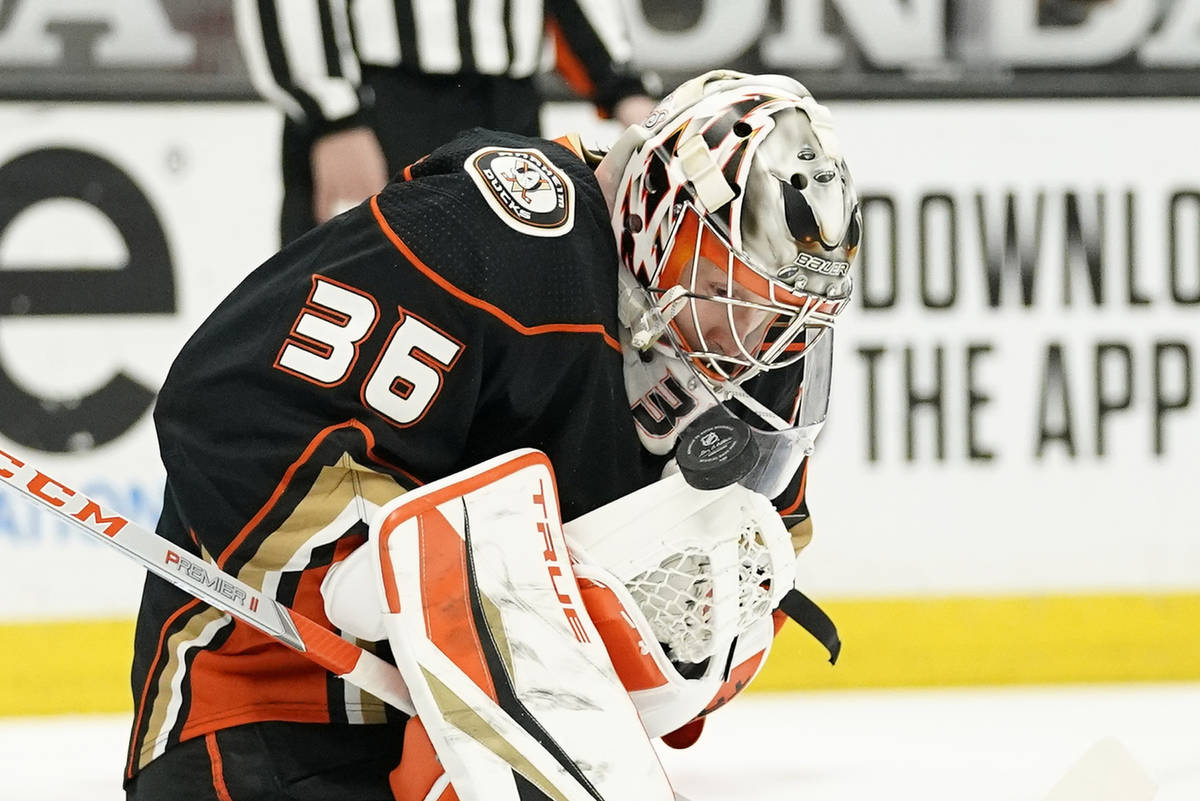 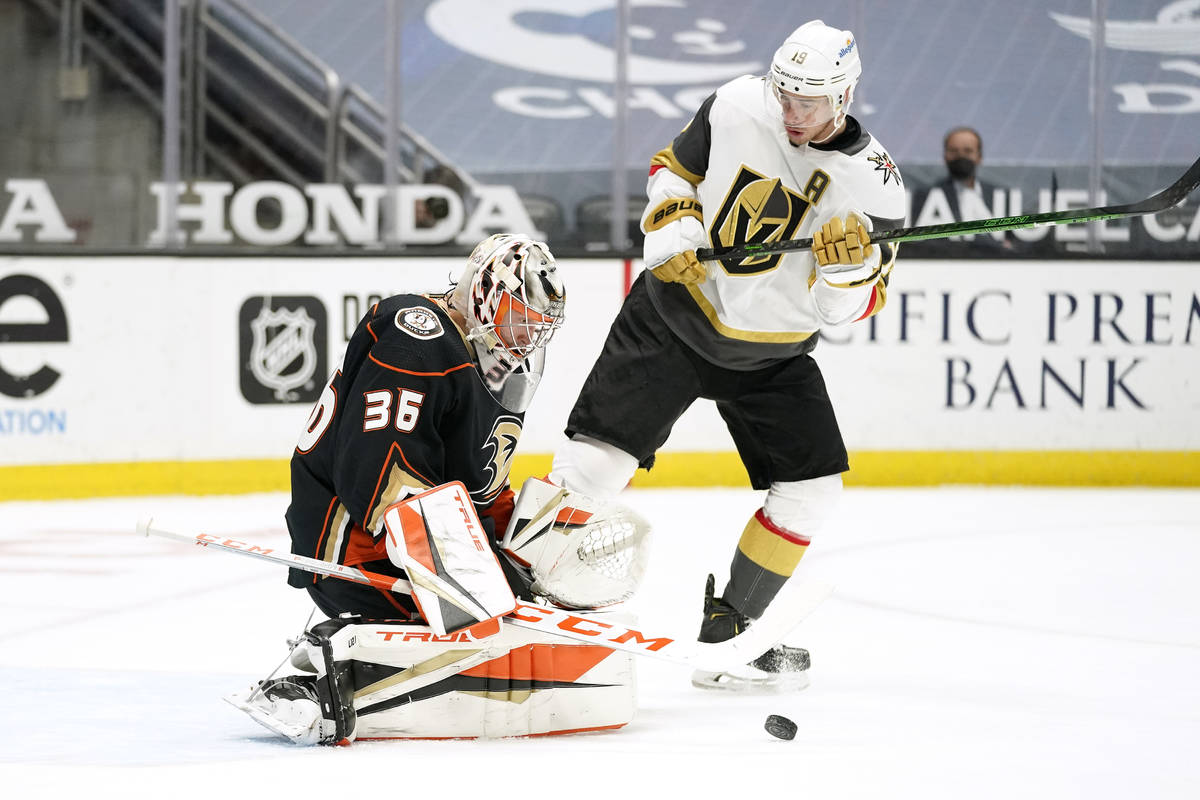 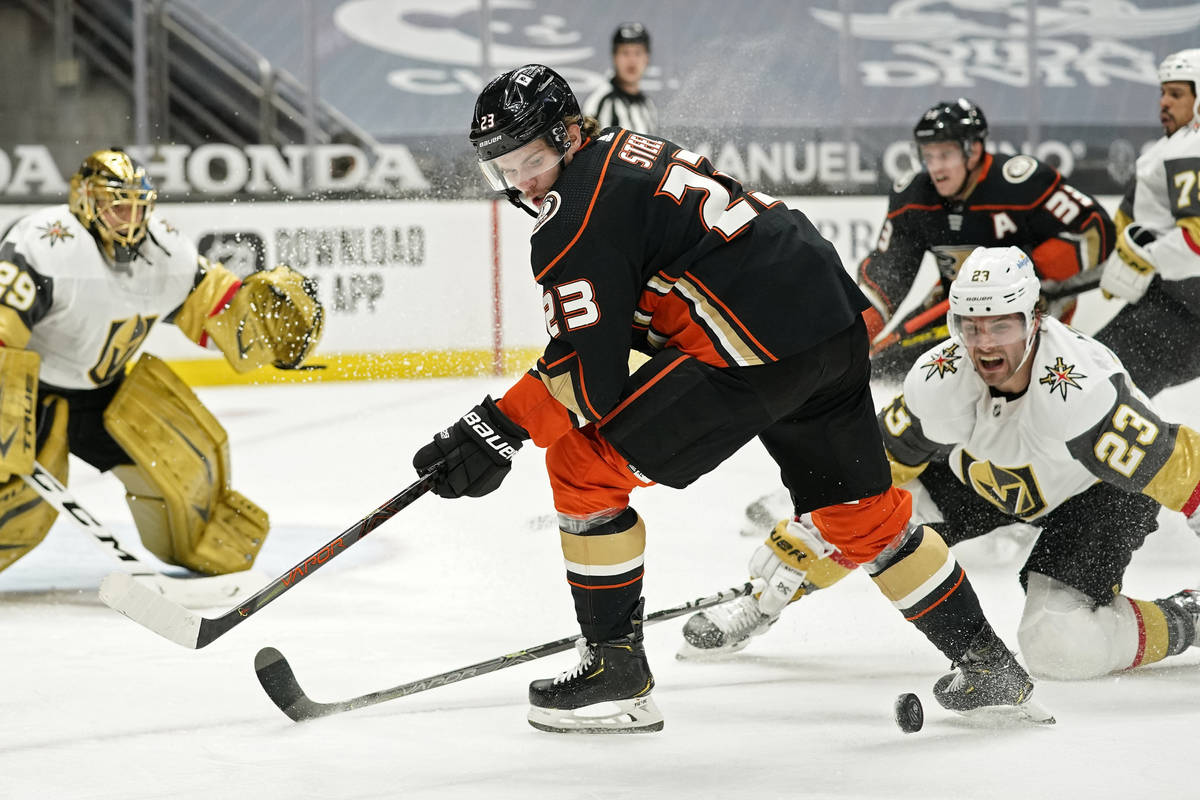 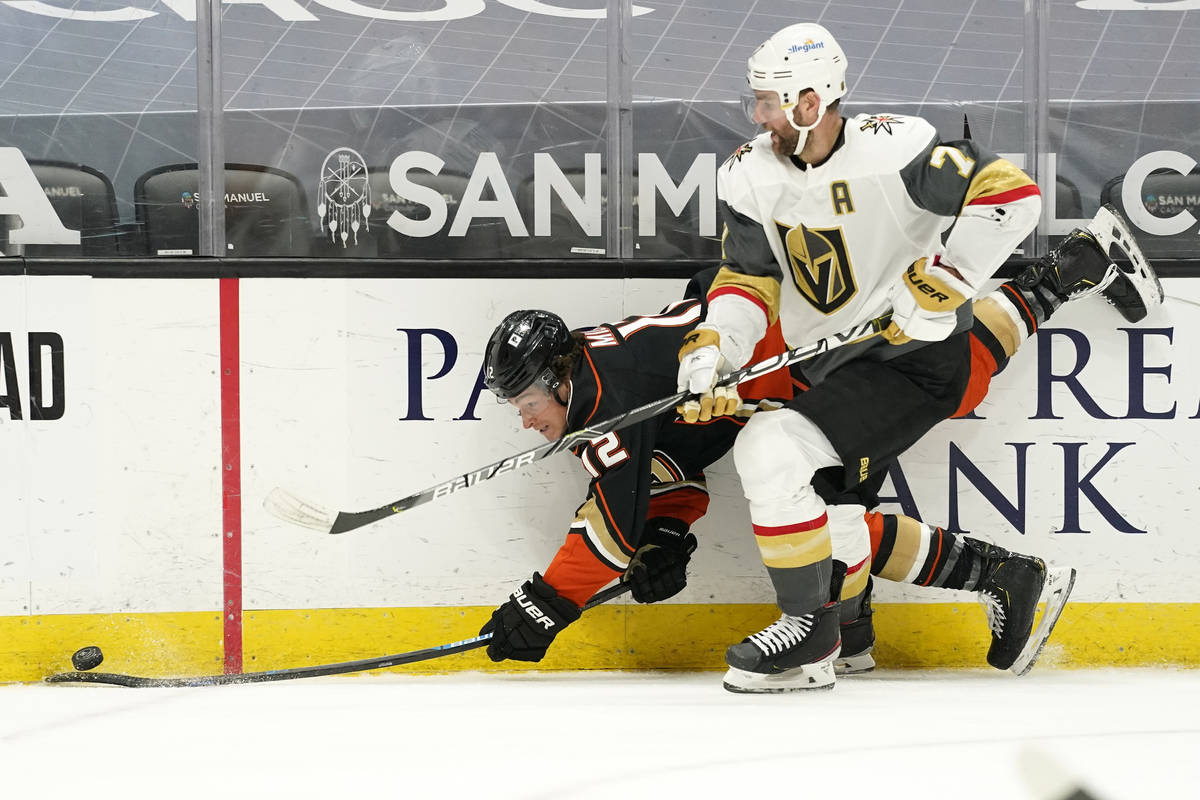 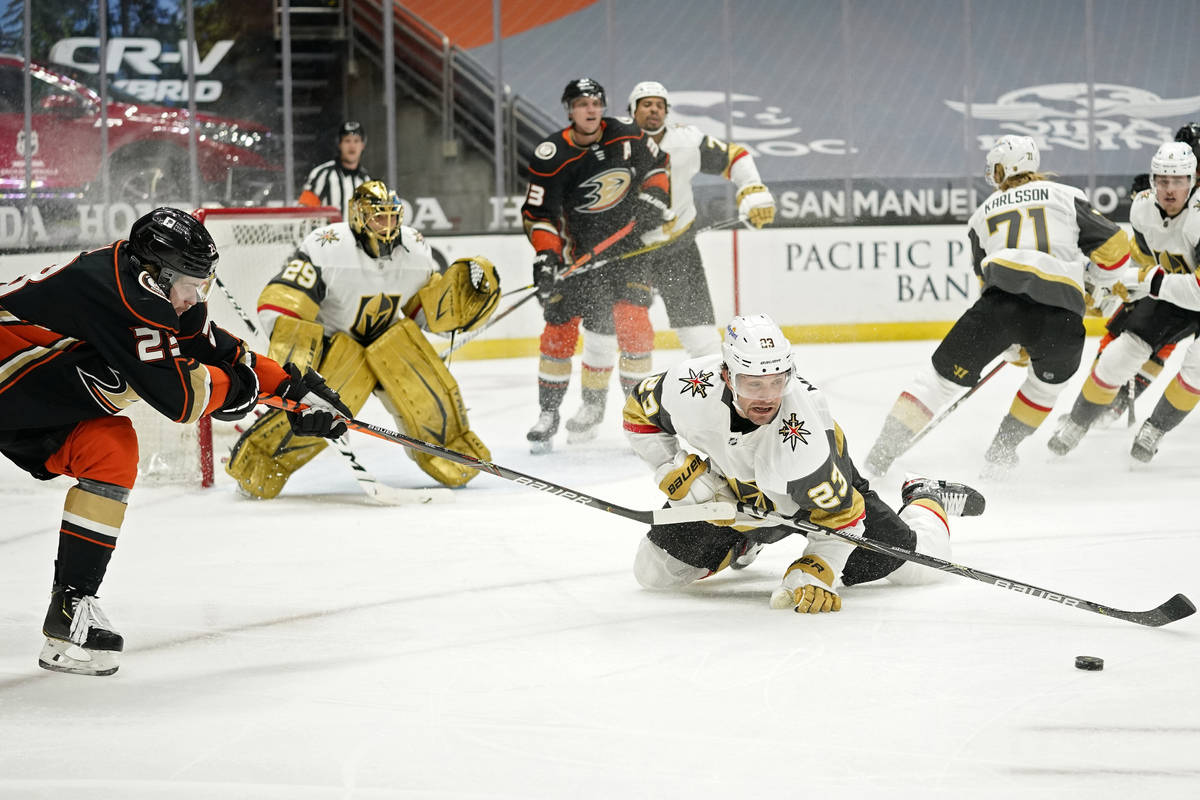 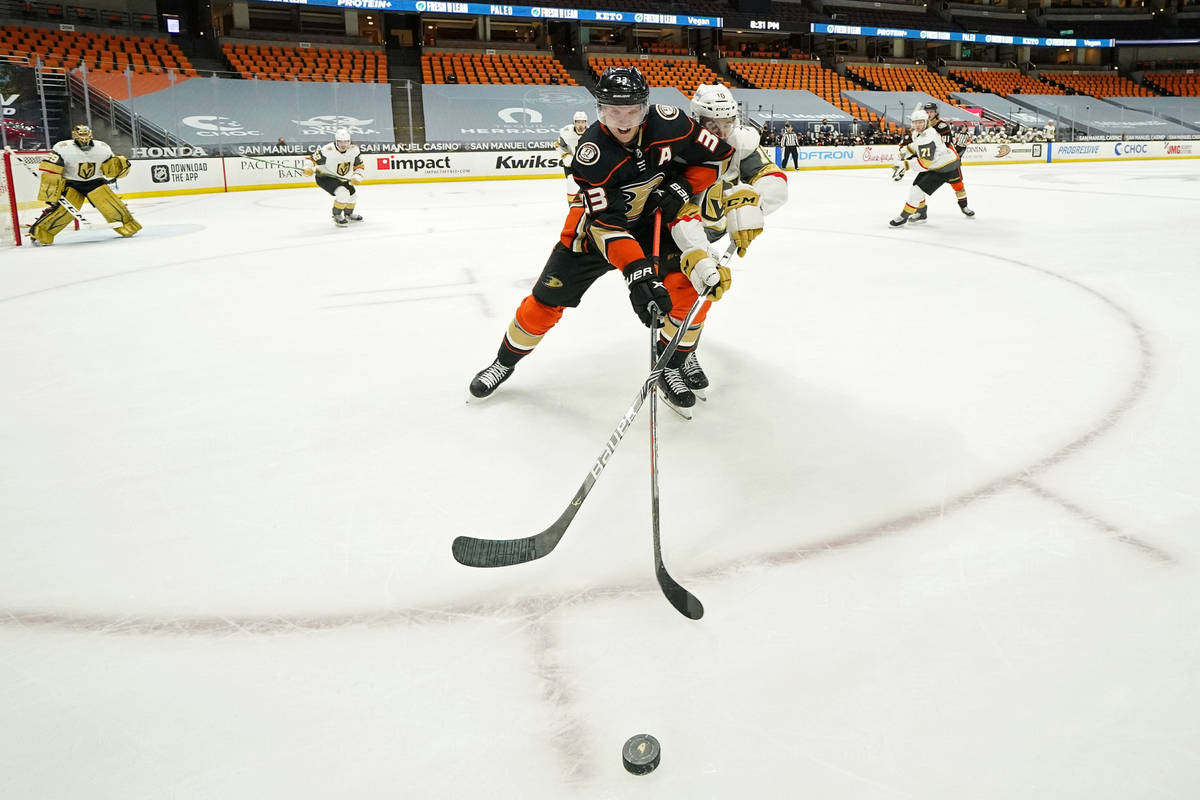 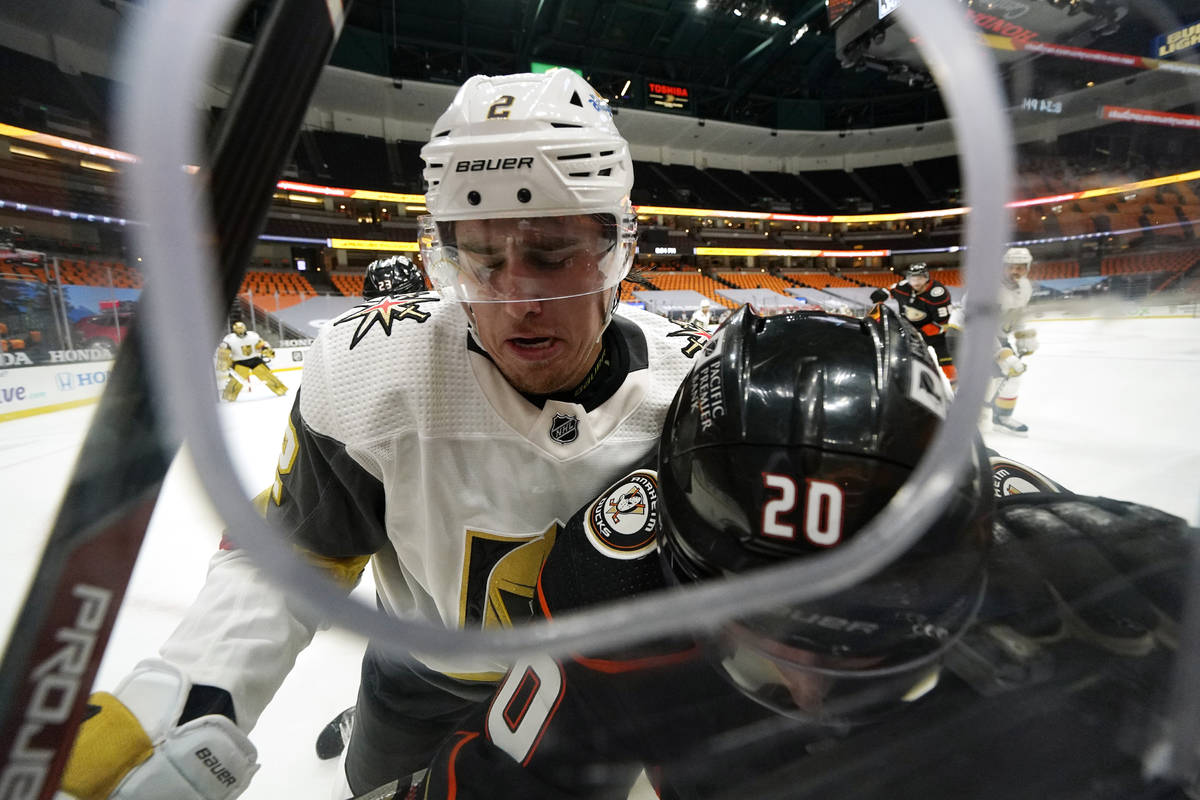 ANAHEIM, Calif. — William Karlsson was on the receiving end of a high stick to the face late in the first period that caused enough damage to the Golden Knights center that he returned to the dressing room for repairs.

But Karlsson had the final laugh against his former team, as he so often does.

Karlsson tallied twice, including the winner with 1:37 remaining in overtime, to lift the Knights to a 3-2 victory over Anaheim on Saturday night at Honda Center.

“There’s always a little extra motivation going against these guys,” Karlsson said. “Me and (defenseman Shea Theodore) always say before the games that these guys didn’t want us.”

Karlsson was a second-round pick by Anaheim in 2011, and his 12 career goals against the Ducks are the most he’s scored against one club.

In the overtime, Karlsson gathered a long pass from Reilly Smith and moved in alone on Ducks goalie John Gibson. Karlsson went to his backhand and tucked in his fifth goal, and third against Anaheim in five games.

“It was nice to get the first one. It’s been a couple games,” Karlsson said. “And after that, you get even more hungry. Almost greedy. To score another one is great. It feels good. That’s always a confidence boost.”

Defenseman Alex Pietrangelo had a goal and an assist, and Theodore added two assists as the Knights improved to 4-1 against the Ducks this season and remained in first place in the West Division.

The Knights (12-4-1, 25 points) host second-place Minnesota (12-6, 24 points) in a two-game series starting Monday when fans will be allowed inside T-Mobile Arena for the first time this season.

Karlsson also provided a moment of magic midway through the second period to put the Knights ahead 2-1.

First, he stripped Jakob Silfverberg on the backcheck in the neutral zone and gave the puck to Pietrangelo. He then headed up ice and got behind three defenders as the long pass from Pietrangelo arrived.

Karlsson was able to chip the puck past Gibson at 9:10 of the period for his first in nine games.

“With the way we play with our speed, we’re kind of always looking for those opportunities, especially if it’s a neutral-zone breakdown like that was,” Pietrangelo said. “Again, it’s just communication. I don’t think I’m making the play unless they’re calling for it. Great finish for him, that’s for sure.”

However, the Knights were unable to hold the lead in the third period with Anaheim making a strong push.

Adam Henrique, who returned to the Ducks’ lineup after being placed on waivers this past week, tied the score 2-2 when he jammed a loose puck past Marc-Andre Fleury with 8:55 remaining.

The Knights challenged that Anaheim’s Rickard Rakell played the puck with a high stick, but the call was confirmed by video review.

“I think we felt that was a high stick,” Theodore said. “You’re going to have bounces here and there. Sometimes you get it, sometimes you don’t. I thought we did a good job finishing the third period strong and had a good effort in overtime.”

Fleury made 28 saves in his eighth straight start to pick up his 100th career victory with the Knights. He made six stops in overtime, including back-to-back saves on Isac Lundestrom from point-blank range.

“It’s been amazing,” Fleury said. “From Day One, the support that we’re getting from the fans, from around the city. The way that we’ve been winning games since then. The way the guys worked to establish themselves as a good team right from Day One. And in the community, too. It’s been a lot of fun and hopefully there’s a lot more coming up.”

The Knights went with the same lineup that worked so well Monday and controlled play for the first half of the opening period with their fierce forecheck.

But Anaheim opened the scoring at 10:09 when the Knights were slow to react in the defensive zone. Ducks defenseman Cam Fowler pinched in from the point to hold the zone and found Rakell open in the left faceoff circle.

Rakell gained a step on Knights center Cody Glass and fired a shot that slipped between Fleury’s right arm and body for his first goal since Jan. 24.

The Knights found the equalizer with 3:31 left in the period shortly after Fleury made a point-blank stop on Fowler. Pietrangelo gathered a pass from Theodore at the right faceoff dot and beat Gibson high to the short side.

“Obviously, two elite offensive-thinking defensemen,” coach Pete DeBoer said. “When you’re defending against two guys like that, you have to respect both of their ability to make plays and or beat you with their feet. I think you get a little more room. I think that was the case on that goal. They created some room for themselves just with what they’re able to do.”