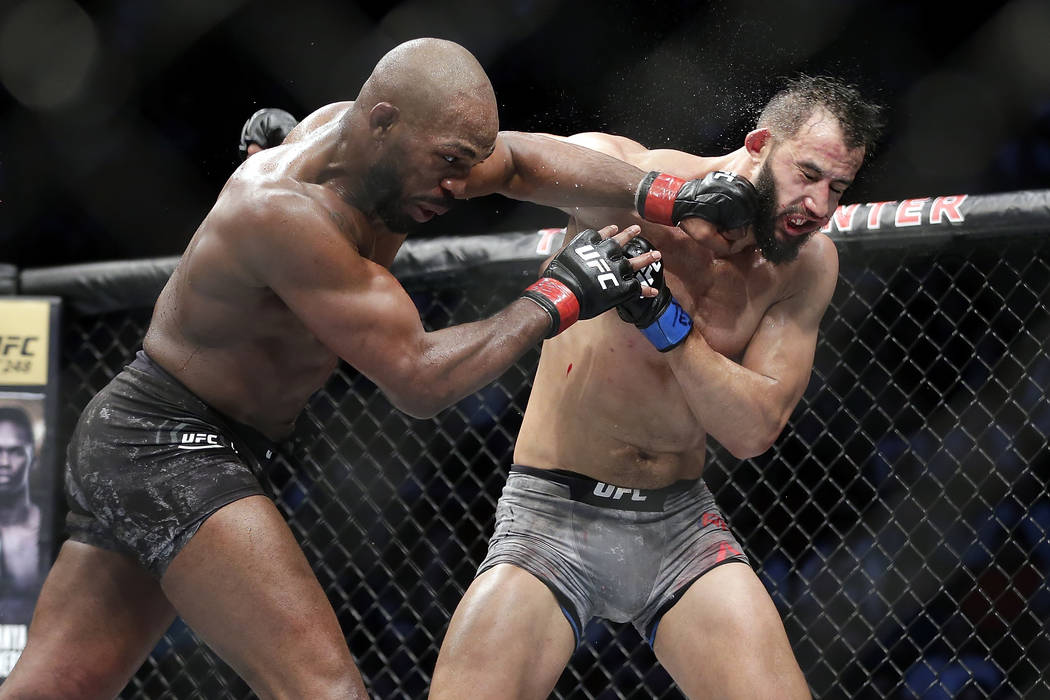 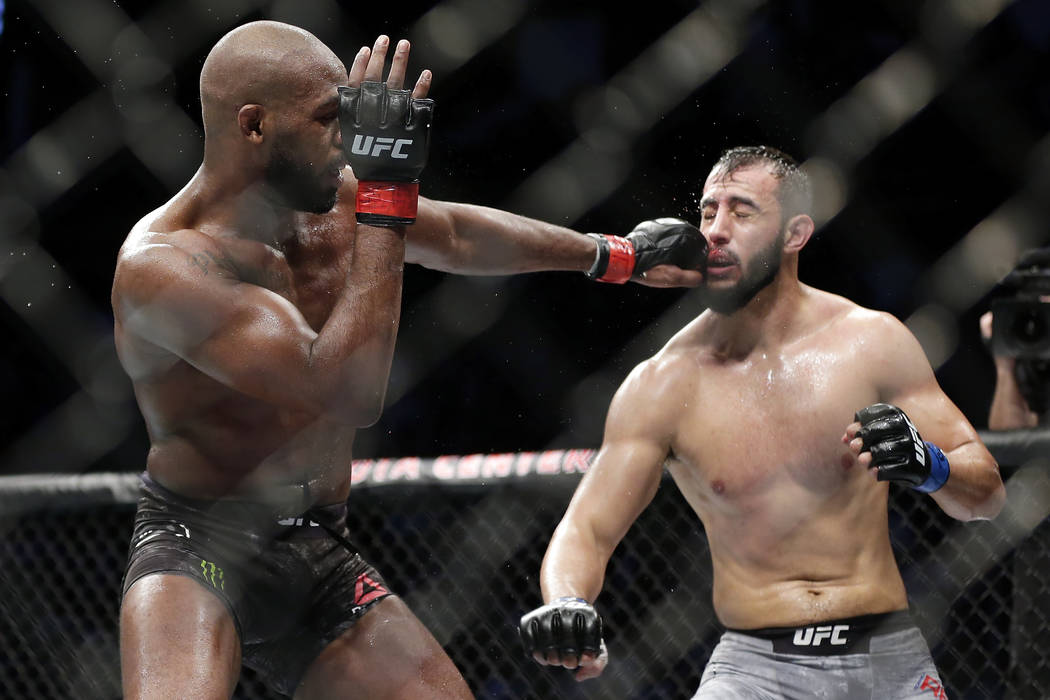 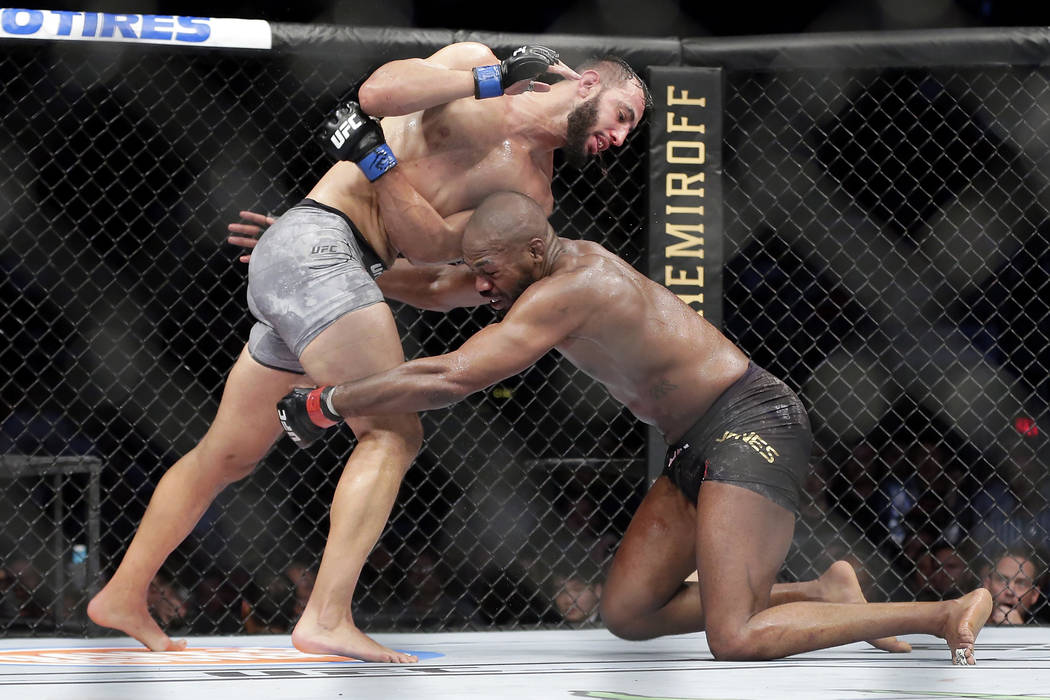 Jon Jones, right, goes for a take down of Dominick Reyes, left, during a light heavyweight mixed martial arts bout at UFC 247 on Saturday, Feb. 8, 2020, in Houston. (AP Photo/Michael Wyke) 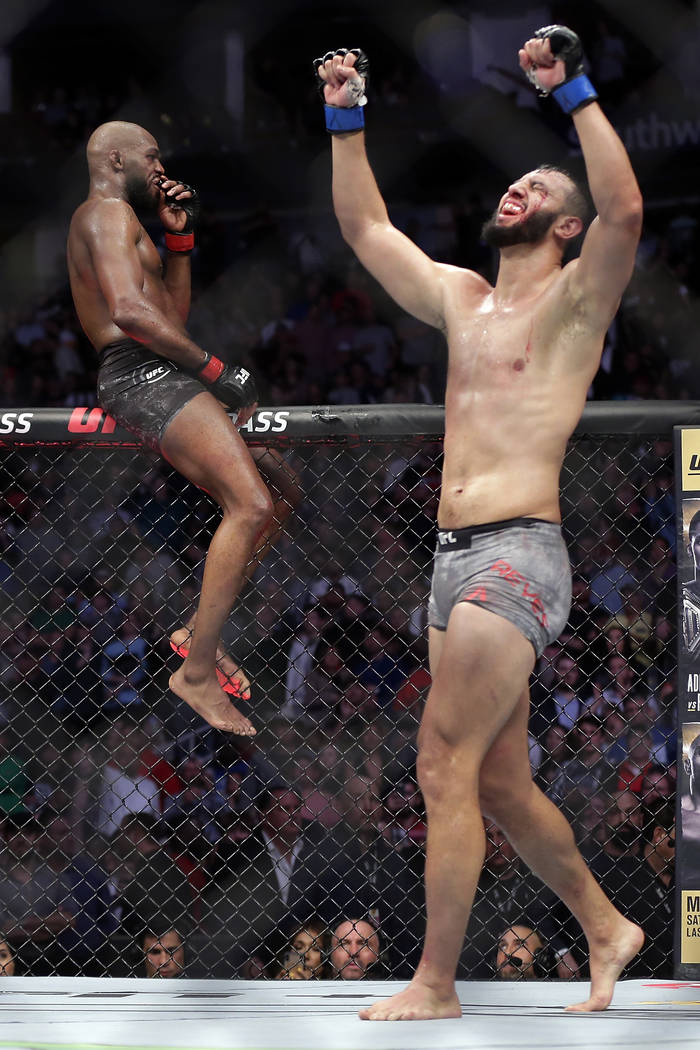 The unanimous decision of 48-47, 48-47, 49-46 was met with scattered applause and loud boos from the crowd, as many felt the challenger had proven enough to take the title.

Jones was fighting for the first time since last July’s win over Thiago Santos at UFC 239, his longest period between fights in more than five years.

Reyes came out on the attack in the first round, briefly knocking Jones to the ground less than two minutes into the bout. Jones bounced back in the second round, landing several strong hooks to Reyes’ head.

The lively crowd swayed back and forth in support of either fighter, chanting both names at different points.

In the third round, Reyes landed blows to Jones’ head, and he drew blood early in the fourth round. Jones finished that round strong and the once-lively crowd became quiet and tense in anticipation of the final round.

Jones ramped up his attack in the final round, but Reyes seemed to keep enough separation from the champ to put it in the judges’ hands.

In the co-main event of UFC 247, flyweight champion Valentina Shevchenko defended her title against Katlyn Chookagian, stopping the challenger in the third round.

The Kyrgyzstan-native Shevchenko (19-3) won her fifth bout in a row, fending off Pennsylvania-native Chookagian (13-3), who entered as the top-ranked contender for the belt. After the fight, Shevchenko did her trademark cartwheels and dancing in the ring.

Earlier on the pay-per-view portion of the 12-bout event at the Toyota Center, Houston-native heavyweight Derrick Lewis (23-7) beat Ilir Latifi (15-8) via unanimous decision with a surging rally late. Lewis, the No. 6-ranked heavyweight who rescued flood victims during Houston’s Hurricane Harvey in 2017, played Houston hip-hop music entering and exiting the ring and had rousing support from the crowd.

Another Houston-native, heavyweight Juan Adams, had a much more bitter homecoming, getting stopped in under two minutes by New Zealand-born Australian Justin Tafa, who earned his first UFC win.

Before the pay-per-view portion of the event, the UFC honored Kobe Bryant, his daughter, Gianna, and the other seven victims of the Jan. 26 helicopter crash with a video tribute and a nine-second moment of silence. Bryant was a partner of UFC sponsor Body Armor and was an investor in the UFC, President Dana White said.