If you are having problems accessing today’s e-Edition, please click on this link VIEW E-EDITION
By Dan Gelston The Assocated Press
November 2, 2019 - 10:33 pm 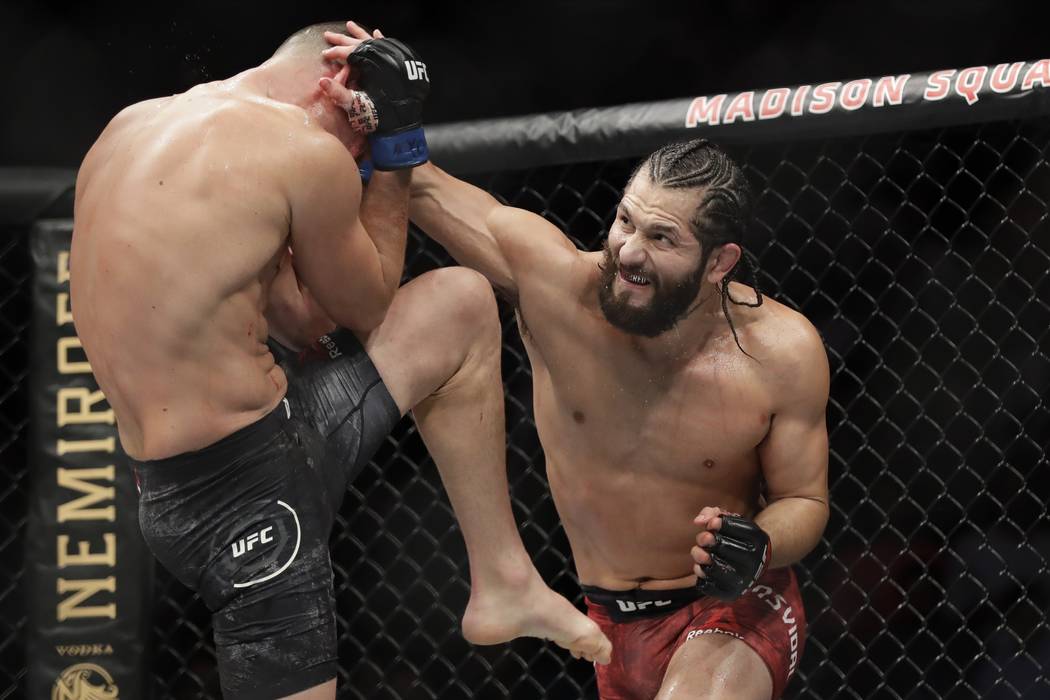 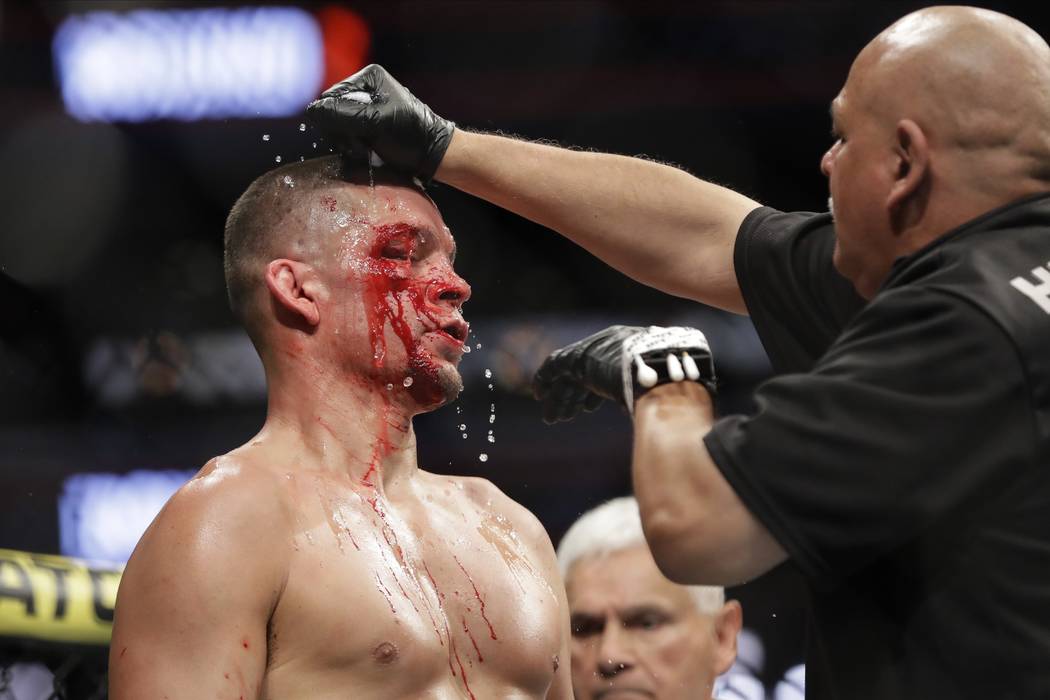 A trainer helps Nate Diaz after the first round of a welterweight mixed martial arts bout against Jorge Masvidal at UFC 244 early Sunday, Nov. 3, 2019, in New York. Masvidal won in the fourth round.(AP Photo/Frank Franklin II) 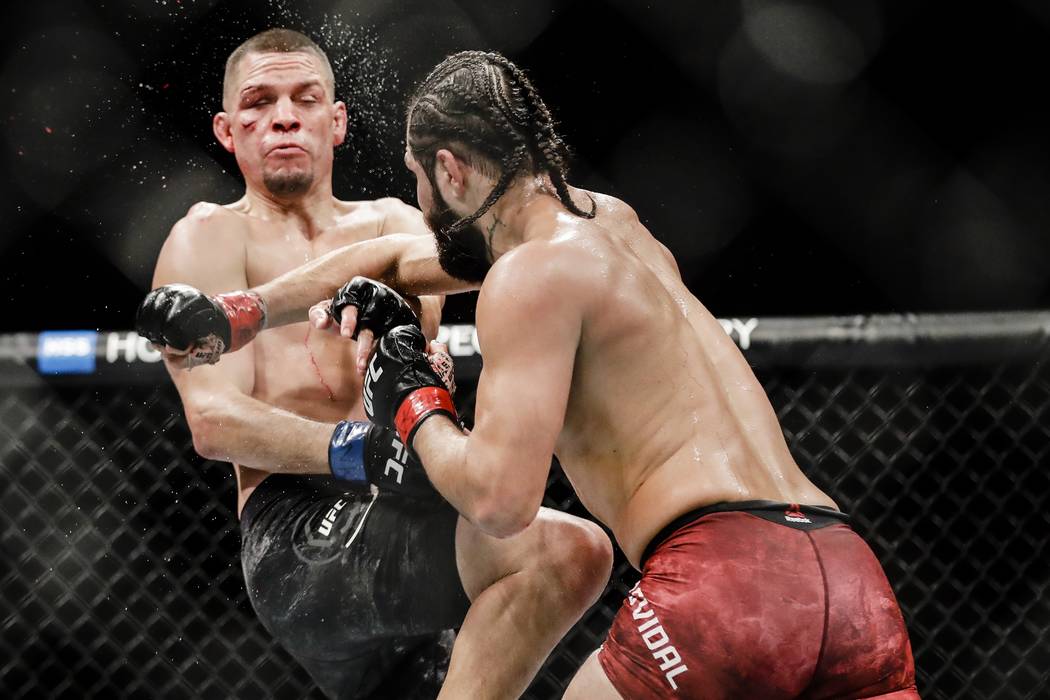 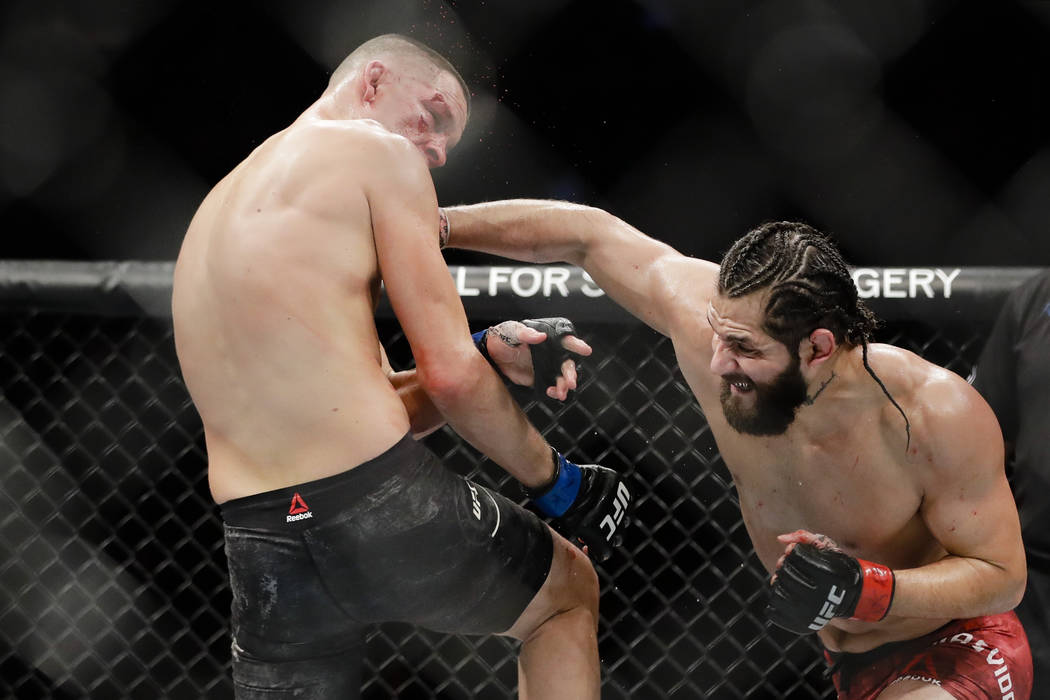 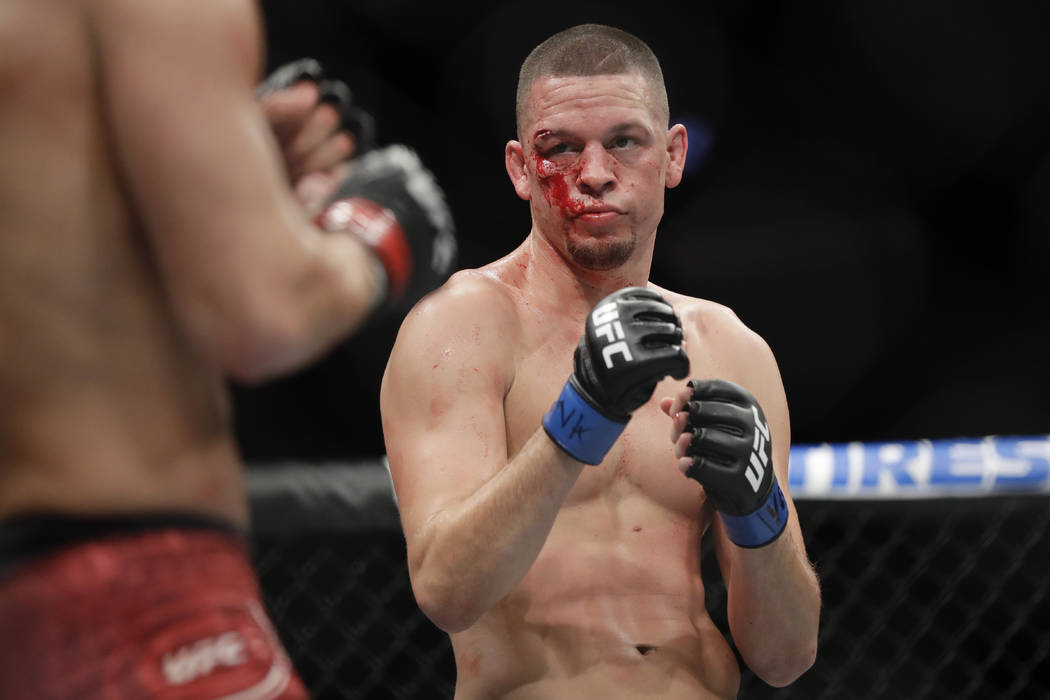 NEW YORK — President Donald Trump was on his feet as Jorge Masvidal defeated a bloodied Nate Diaz via a TKO before the fourth round of the UFC 244 main event at Madison Square Garden on Saturday night.

Dwayne “The Rock” Johnson wrapped a crudely named, made-for-PPV baddest man in MMA title belt around Masvidal’s waist as nearly 20,000 fans howled in protest of the quick finish. Masvidal dominated the first three rounds and opened cuts above Diaz’s eyes that turned his face into a crimson mask. The assigned doctor stopped the fight just before the fourth round. Both fighters felt the bout should continue.

Johnson walked out holding the manufactured Baddest Mother (Censored!) championship belt to a thunderous ovation as his WWE theme music hit. Trump, who became the first president to attend a UFC card, clapped for Johnson and stayed on his feet for the furious early rounds.

Masvidal charged at Diaz once the initial bell rang before he pulled up and smiled, a nod to his UFC-record five-second KO of Ben Askren in his last fight. Trump and his adult sons stood as Masvidal took quick control and pounded on Diaz. Diaz had a gash open over his right eye, his face bloodied as he lay on his back trying to kick away Diaz.

The partisan crowd took turns chanting “Diaz!” and “Jorge!” and The Rock sat stone-faced, nodding at the biggest haymakers. Diaz staked his claim as the BMF — if the B stood for bloodiest — when he flexed for the crowd to end the second as blood poured down his face.

The doc wouldn’t let the fight go into a fourth and 170-pound bout was over.

Trump in the house

The packed house at the Garden stood and had their phones out, craning their necks to catch a glimpse of the president as he took his cageside seat. Trump smiled and waved to fans as AC/DC’s “Back in Black” was blasted over the speakers shortly before the start of the 10 p.m. event. Trump received a mixed reaction, though nothing quite as derisive as the boos and “Lock him up!” chants he received last week at the World Series.

Trump hugged boxing legend Roberto Duran as they posed for a picture and sat in the same row as UFC President Dana White. Trump is tight with White, a relationship that dates to UFC’s formative years before its rise into a billion dollar promotion. New Jersey was one of the first states that embraced UFC, and White credits cards at the Trump Taj Mahal for helping the company grow into a heavyweight in the sports world. White spoke at Trump’s request at the Republican National Convention and they are occasional dining partners.

Trump wore a suit and red tie, and sat with sons Donald Jr. and Eric, several congressional Republicans and sports personalities just out of range of potential blood splatter.

Trump Jr. tweeted White told the family, “it was the most electrifying entrance he seen in 25 years of doing this.” The Trump brothers sat cageside in August in New Jersey in support of Trump fan Colby Covington.

Taking a break from an impeachment inquiry, Trump could only hope the first fight of the pay-per-view wasn’t a sign of things to come — a devastating KO from the left.

He rose from his seat like the rest of the fans when Kevin Lee knocked out Gregor Gillespie with a left leg kick to the head. Gillespie bounced off the cage and lay motionless, out cold on the mat for a minute or so. Trump didn’t react as he watched the replay and applauded just like a regular fight fan when Gillespie finally came around and got to his corner. He did not appear to sing along to Darren Till’s “Sweet Caroline” walkout music.

Derrick Lewis won his heavyweight bout and gave Trump a shoutout from inside the cage, saying “I know everything ain’t going so good in the White House. You gotta turn that … around in 2020.”

Protesters outside MSG chanted “Danger, danger, there’s a Fascist in the White House,” over a bullhorn and held signs that read “Trump/Pence Out Now!” Once the fights started, there were no noticeable signs or sustained calls of support or protest for Trump. The only jabs were delivered inside the fenced-in, 4-foot octagon came from the fighters. Lewis was the only winner who mentioned Trump, and the crowd of nearly 20,000 seemed largely uninterested in him.

The Rock and the president overshadowed a wildly entertaining card that had the Garden rocking in nearly every bout.

The former WWE champ is the biggest box office star in Hollywood, with his “Jumanji” follow up out later this year. Johnson also announced his Seven Bucks Productions company is working on a biopic on retired MMA star Mark Kerr. Kerr won consecutive UFC heavyweight tournaments in the company’s infancy and later battled serious addiction issues. Johnson is set to star as the fighter known as the “Smashing Machine.” 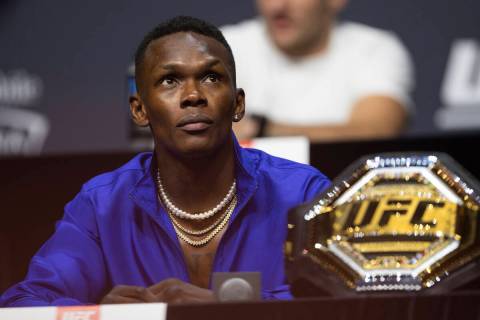